The LG G2 is the Korean manufacturer's flagship smartphone, which boasts of a 5.2-inch Full-HD IPS display and a 2.26GHz quad-core Qualcomm Snapdragon 800 processor. The phone was launched in India on Monday at a price point of Rs. 41,500 (16GB version).

We were able to spend some time with the LG G2 at the launch event, and here are our first impressions:

The first thing that you notice when you hold the LG G2 is that is lightweight. The phone doesn't feel bulky and fits in the hand despite sporting a rather large screen. The LG G2 is available in Black and White colour variants.

The other thing that strikes you is the absence of any physical buttons on the G2's edges. LG has been touting this particular attribute of the phone's design as a distinguishing feature; the LG G2's power and volume rocker keys are placed at the back of the phone below the camera lens. 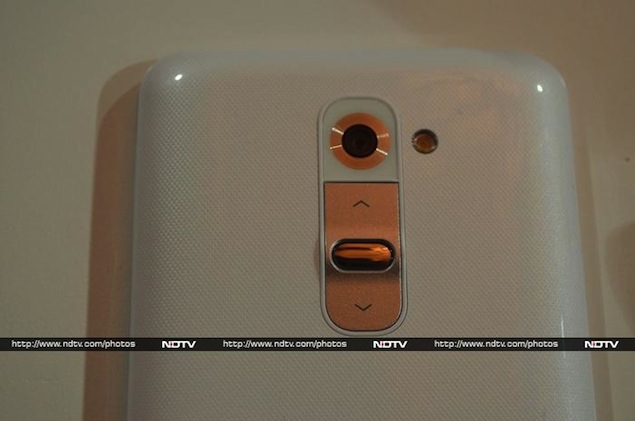 LG says that it has done some consumer research before deciding to go with the new design, as it found that a large number of people place their index finger on the back of the phone while making a call.

We found the placement of these keys on the LG G2 a bit awkward, as we're used to these keys being placed on the edges.

The front of the LG G2 is dominated by its 5.2-inch full-HD (1080x1920 pixels) IPS display, with a pixel density of 423 pixels-per-inch(ppi). The bezel surrounding the phone's display is minimal and there are no physical keys on the front panel. The 2.1-megapixel front-facing camera and the sensor array are located above the display.

The micro-SIM tray is located at the left edge of the LG G2, while there are no buttons or ports on the right edge. The Infrared blaster port sits at the top edge. The port allows the phone to be used as a universal remote control in combination with a bundled app.

The bottom edge of the LG G2 features a 3.5mm headset jack just like the iPhone 5, apart from two speaker grills and a Micro-USB port. A chrome frame runs across the edges, giving the phone a premium feel. 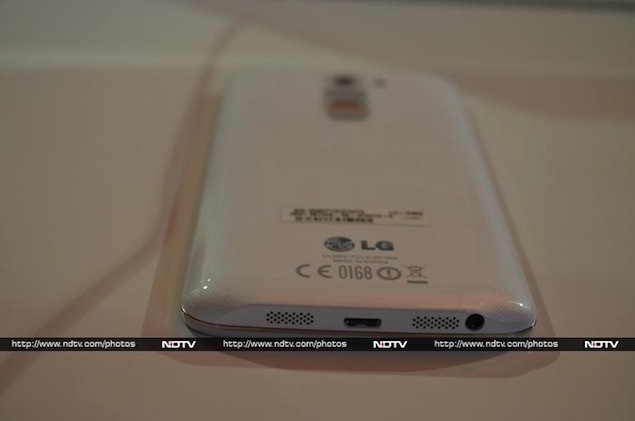 The back of the LG G2 is made of plastic and sports a textured finish that is slightly glossy. We found that the phone's back was prone to smudges. These were more prominent in the Black colour variant of the phone.

As we mentioned earlier, the Power/ Screen lock key and the Volume rocker keys are located at the back just below the 13-megapixel camera lens and LED flash. The keys are metallic and offer good tactile feedback. The Volume-up key also doubles up as a shortcut key to launch the Quickmemo app on long press and the Volume-down key acts as a camera shortcut key on long press when the phone is locked.

The LG G2's camera lens is made of scratch resistant sapphire crystal glass to prevent scratches as users of the phone are likely to hit the lens while looking for the volume keys.

The G2 is powered by Qualcomm's quad-core Snapdragon 800 processor that's clocked at 2.26GHz, and is coupled with 2GB of RAM. In our brief use of the phone, we found that navigating across the menu and opening and closing apps was very smooth. The phone is one of the most responsive Android smartphones we've come across thanks to all the power under the hood. 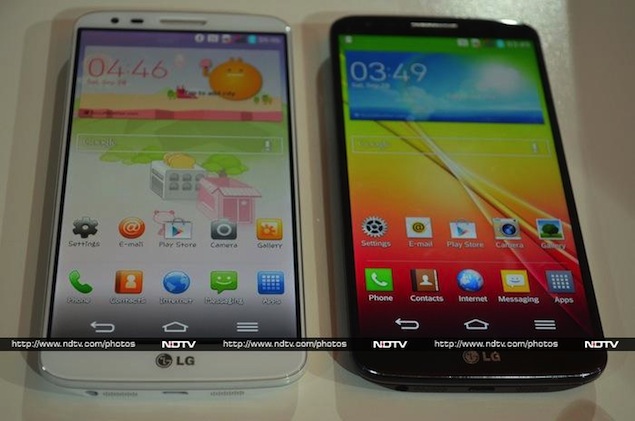 The LG G2 comes with a number of software bells and whistles. Among many of them is what the company calls KnockON (which is LG's version of double tap to unlock and even lock the phone), Guest mode (for offering selective access to apps to a different user), and Slide Aside (a way to multitask by moving between three apps at once via a three-finger swipe gesture).

So far, we were impressed with the build and performance of the LG G2. We will soon run the phone through our detailed test processes, and have a final verdict ready for you with our full review.  Do stay tuned for that.