Earlier this year, Lenovo began merging its Mobile Business Group with its subsidiary Motorola Mobility, and stated that future smartphones would be designed, developed and manufactured by the Motorola division. This led to speculation that Lenovo could be on the verge of killing some of its own smartphone models , including the Vibe range.


The company's latest devices are the Vibe P1 and P1m, both of which feature massive batteries and promise longer runtime than similarly priced competitors. On our test bench today is the Lenovo Vibe P1, which offers all the usual features that buyers look for in a smartphone, along with a 4900mAh battery. We go in-depth with the Vibe P1 in our review. 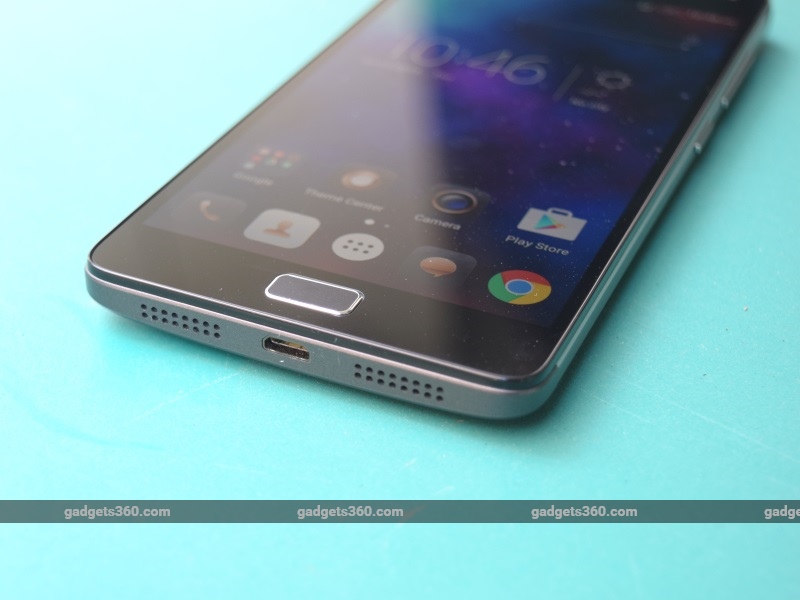 Look and feel
While the identically priced Vibe S1 has a sleek, sophisticated body and is clearly focused on looking good, the Lenovo Vibe P1 is less concerned about aesthetics and more about function. As a result, this smartphone is large, thick, and very ordinary-looking, getting nowhere near as many second glances as the beautiful S1. The edges are sharp and straight, the colours are muted and basic, and the general design has nothing special about it.

The front of the device is 72 percent screen, and reminds us of typical Samsung designs  thanks to the physical home key. The fingerprint sensor is integrated with the home key, while the Back and Recents buttons are backlit capacitive soft keys located on either side of it. The body of the phone is entirely metal, with the exception of a plastic strip on the top which hides the slots for the SIM cards and microSD card, and a small portion at the bottom which is also plastic. 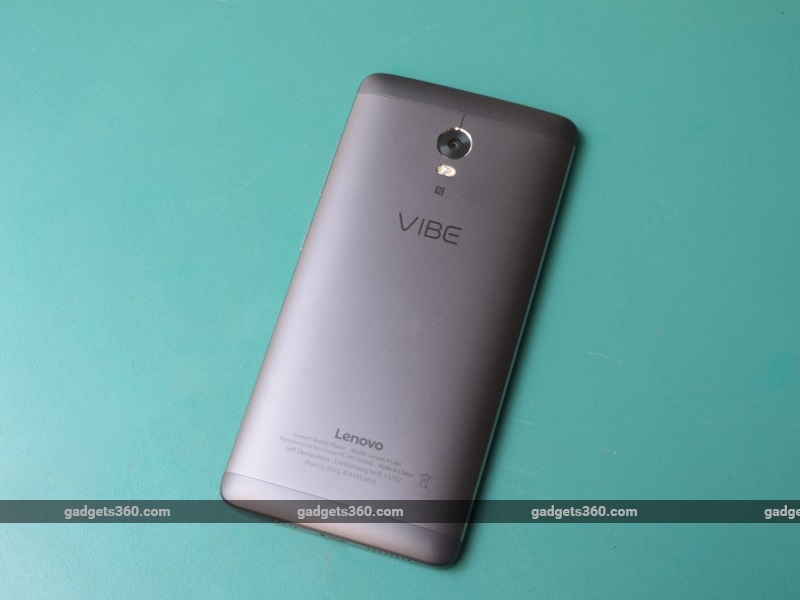 The screen of the Lenovo Vibe P1 is a 5.5-inch full-HD panel, with a density of 401ppi. It's a typical IPS-LCD screen that is sharp and clear in normal light, but falls a bit short under harsh sunlight and at extreme viewing angles. The screen isn't quite as bright as we'd have liked even at the brightest level, and the ambient light sensor never seems to get the automatic brightness right. That said, it's still a great screen in terms of sharpness and colour reproduction, and is great when used indoors.

The back has a smooth, dull finish that feels great to hold. The camera and dual-tone LED flash are in the centre near the top, while the typical Vibe and Lenovo logos also find their way onto the back. The sides follow a standard layout, with the power and volume keys on the right, the 3.5mm socket and secondary microphone at the top, the Micro-USB port and speaker grilles (only the right grille actually houses a speaker) at the bottom, and a slider switch that controls the power-saver mode on the right. As previously stated, the SIM slots and microSD slot can befound under the plastic cover on the top, and are entirely hidden away when the cover is in place. 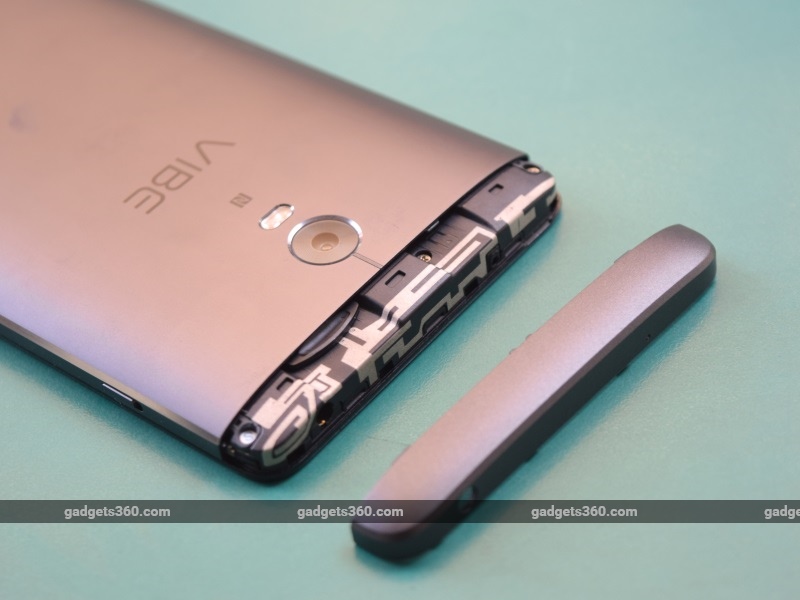 Of particular note is the power-saver slider, which switches the phone quickly between normal battery consumption and an extreme power saving mode. When in this mode, the phone switches off data connectivity and the vast majority of other functions, allowing only basic features such as calling, SMS, contacts, calculator, calendar, clock, and radio. It also displays the estimated time left at its current charge level, which is reassuring in situations where you're dealing with a low battery and need basic phone functions to be active. While the mode itself is incredibly useful, we didn't see the need for a physical slider to be dedicated to it. It would have been useful if the slider was user-customisable and could be assigned to other functions.

Also of note is the fingerprint sensor, which is located within the physical home key. It can be used to directly unlock the device from sleep mode, and usually works well. The Synaptics sensor can store and read up to two fingerprints, and for now only allows you to unlock the device. The sensor itself usually works well, but occasionally doesn't read a fingerprint, requiring you to reposition your finger and try again. 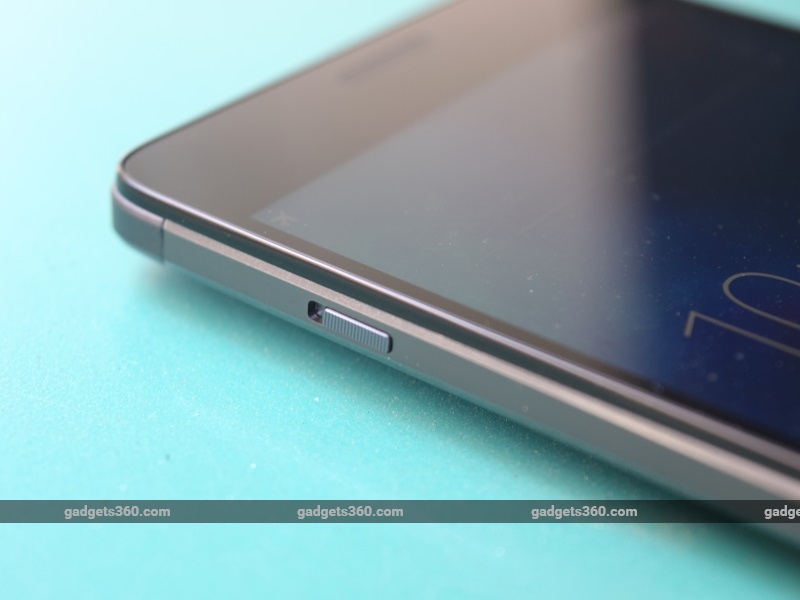 Lenovo states that the sensor can also be used to 'shop online more securely' and 'read other fingerprints'. However, allowing just two fingerprints to be stored severely limits this capability, and we didn't actually see any other use for the sensor apart from unlocking the device.

Also included is a massive 2A/7V charger, which charges the device quickly. We went from zero to 65 percent in just 35 minutes, which is impressive considering that this is a large 4900mAh battery. The package also includes an OTG adapter that will let you use the Vibe P1 as a portable battery to charge other devices. 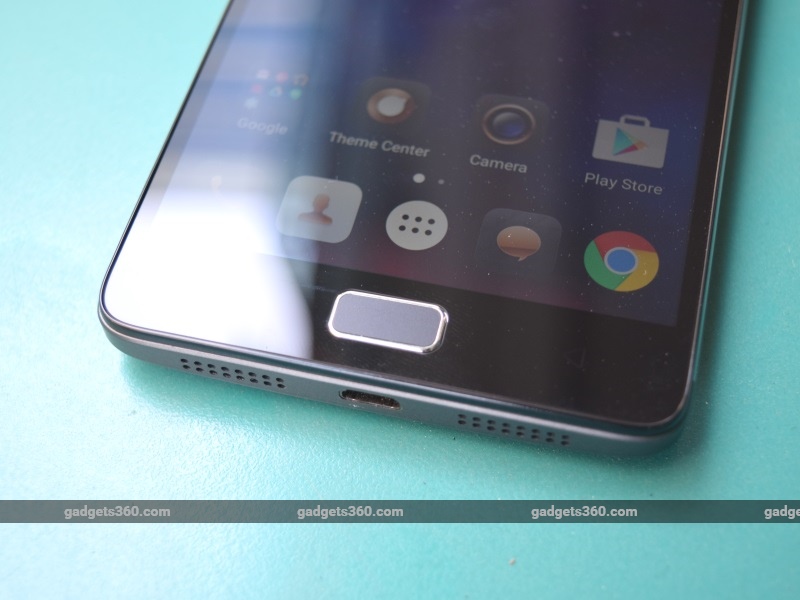 Specifications and software
Although the Lenovo Vibe P1 is priced the same as the Vibe S1, there are some significant differences in the two phones' specification sheets. While the latter sports a MediaTek SoC, the former features a Qualcomm Snapdragon 615, which is frequently seen on smartphones in the Rs. 10,000-20,000 price range. The P1 also has 2GB RAM, which is less than the 3GB on the S1. This phone has NFC connectivity and distinct slots for both SIMs as well as the microSD card, rather than the hybrid slot seen on the S1, which means you have to choose between expandable storage and the second SIM. Internal storage on the Lenovo Vibe P1 is 32GB, which is excellent at this price range.

One of the key features of the Vibe P1 is its 4900mAh battery. Although it adds serious bulk to the device, it's also incredibly useful and will appeal to anyone who has trouble getting through a full day on a single charge. 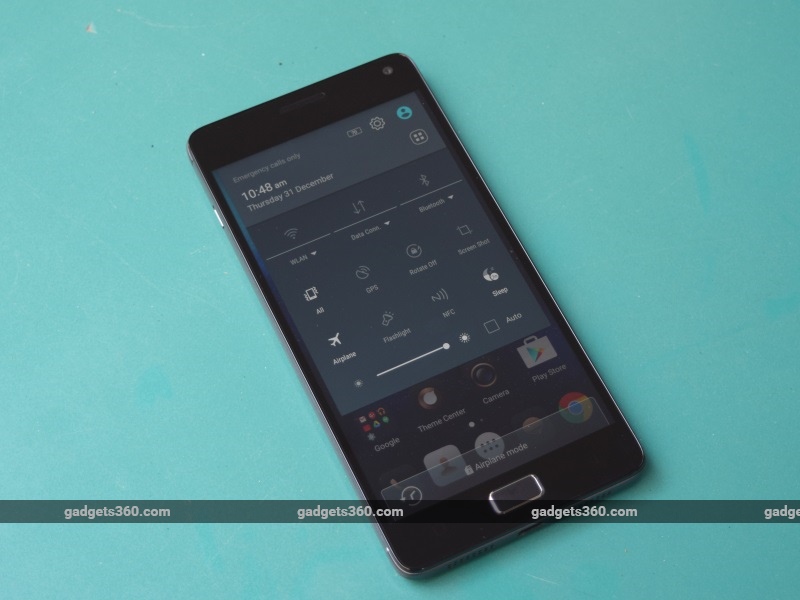 The Vibe P1 runs Android 5.1.1, with Lenovo's Vibe UI layered on top. While previous smartphones from Lenovo have used the same single-layered user interface, the Vibe P1 interestingly starts up with a stock-Android-like dual-layered UI. It's possible to switch back to a single-layered UI if you prefer that, and it's great that users now have the choice. The rest of the interface is pretty much the same the Vibe UI we've seen before, from the quick settings and status bar to the Settings app.

There are of course specific sections within the Settings app for features such as the fingerprint sensor, screen gestures, and quick snap, but the rest of the menu is identical to what we saw just recently on the Vibe S1. This includes permission controls, secure zone management and power consumption details. Most of the bloatware on the phone can be uninstalled, and we get the feeling that Lenovo's software has matured a lot now. 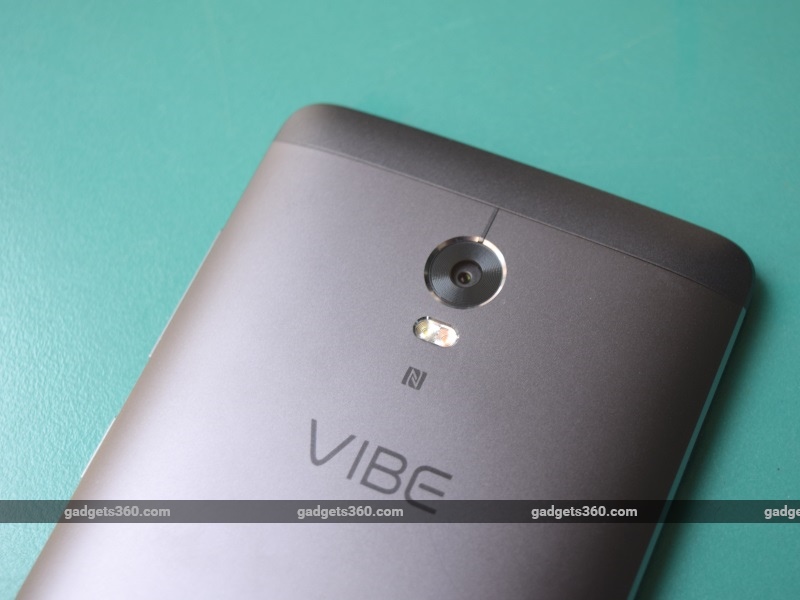 Camera
The Lenovo Vibe P1 has a 13-megapixel primary camera with dual-tone LED flash, and a 5-megapixel front camera. Both are capable of recording video at full-HD resolution. Although not quite as interesting as the Vibe S1 or Vibe Shot in terms of features and tricks, the cameras on the Vibe P1 are functional and capable enough.

The camera app is easy to use, with on-screen keys for quick video recording, camera switching, the flash, and HDR mode. The settings menu opens up a few more options, including manual settings, photo and video resolution, self-timer and location tagging. You can also use the volume keys to capture shots, and double tapping a volume key from anywhere on the device, including in sleep mode, will quickly launch the camera app and capture a picture if you enable that function in the settings. There is also a panorama mode, along with filters which can be applied while shooting. 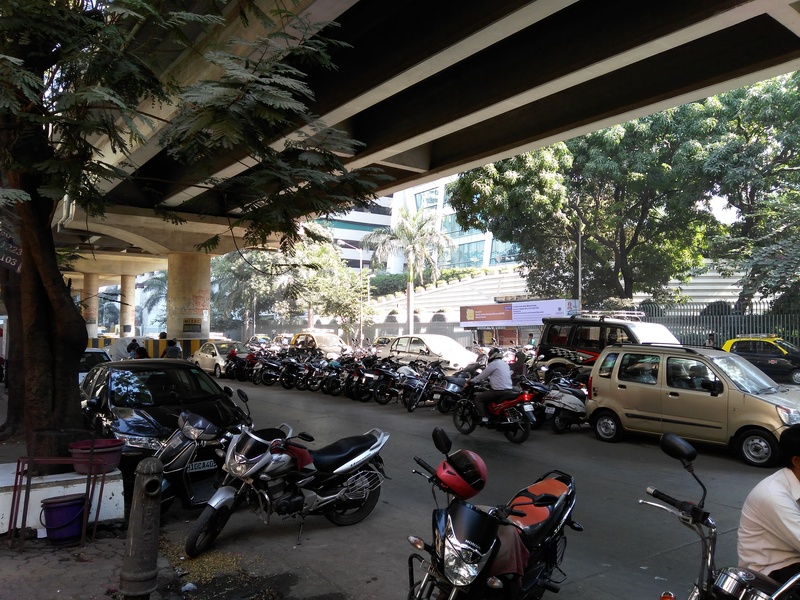 The primary camera is decent in terms of detail and sharpness, and is particularly good at maintaining focus. It accurately captures moving objects and composes a decent shot where it's easy to perceive distances and details, even on the screen of the phone itself. There are some issues with colour, especially bright colours. Under intense sunlight, pictures tend to wash out, losing colour accuracy and having certain portions appear entirely white.

This leads to some problems with outdoor shots, but a bit of careful composition and focusing can reduce the saturation a little. Some noise and tearing can be detected when zoomed in deep, but in general photo quality is acceptably good and the Vibe P1 will serve most smartphone photography needs comfortably. The front camera is basic and is suitable for the occasional selfie and video chat, but selfie lovers won't find much appeal in the front camera of the Vibe P1. 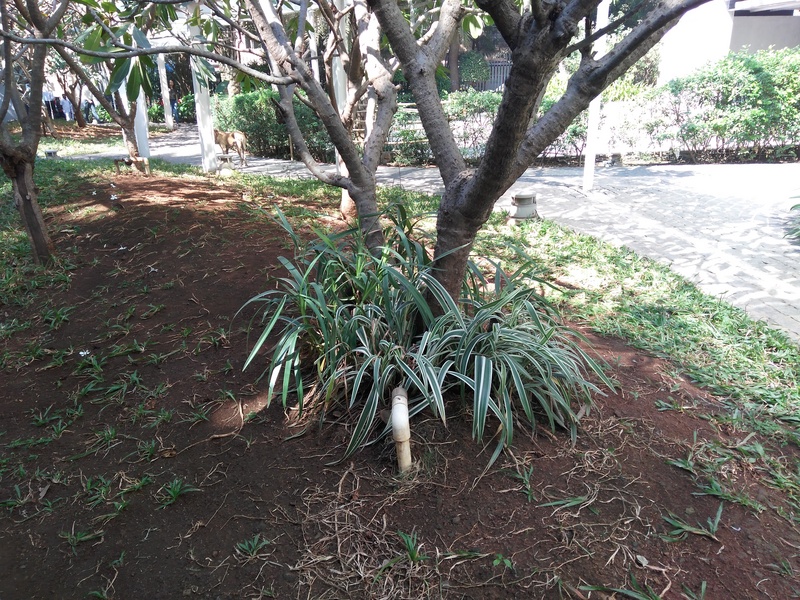 Performance
The Snapdragon 615 offers decent, reliable performance on a lot of the other devices we've tested, and continues to do so on the Lenovo Vibe P1. Heavily encoded videos and graphically intensive games, as well as general day-to-day performance are all good, and we experienced no lag, stutter or crashes during our time with the phone.

The device also returned benchmark figures that are on par with what we've been seeing on other Snapdragon 615 devices. The P1 scored 35,388 and 19,995 on AnTuTu and Quadrant respectively, along with 14fps and 5496 points in GFXBench and 3DMark Ice Storm Extreme. Simply put, this phone can be expected to perform reliably.

Coming to its key feature, the phone ran for 20 hours, 38 minutes in our video loop battery test, and ran for a full two days with ordinary use. In situations where you need basic phone functionality, the power saver mode can help stretch battery life by a lot, and users who need a good phone with a solid battery will not be disappointed with the Vibe P1. The phone is also capable when it comes to holding on to cellular and Wi-Fi connectivity, and call quality is good as well. The single speaker is a bit weak in our opinion, but audio performance is fine with headphones connected. 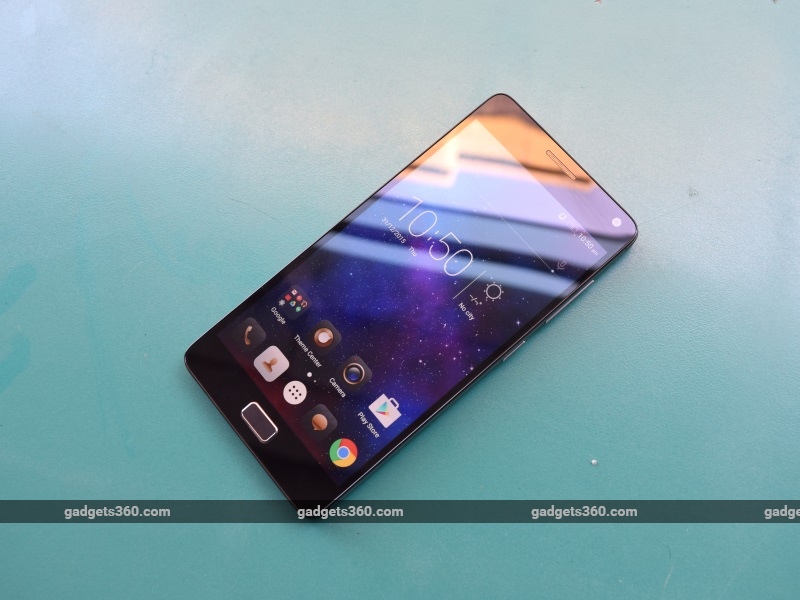 Verdict
As smartphones get more and more powerful, battery life continues to suffer. Phones today are designed to be solid performers and have good features, but aesthetic requirements mean that many phones neglect the battery. As a result, it's becoming harder for your smartphone to last through even a single day. Phones such as the Lenovo Vibe P1 aim to fix that.

With the Vibe P1 you're getting a solid smartphone experience with all the necessary features and specifications, enough power, a decent camera and a fingerprint sensor, along with a much-needed boost to battery life. The only shortcoming of the P1 is the fact that it's a heavy phone with no real aesthetic identity. If you're okay with a heavy, average looking smartphone, the Vibe P1 has everything you need. This is an excellent mid-range smartphone and one that you should definitely consider if you're looking at buying a new device for less than Rs. 20,000. 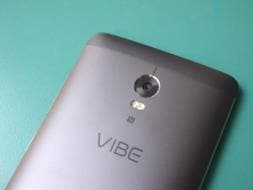