Lenovo K3 Note launched in India on Thursday with a price tag of Rs. 9,999 and a set of specifications that seem unmatched at the price. The K3 Note is perhaps the first sub-Rs. 10,000 smartphone to come with a full-HD display, and it packs in other goodies such as an octa-core processor and 2GB RAM, which will keep those obsessed with specs happy. We spent some time with the Lenovo K3 Note at a pre-launch event and here are our first impressions.

Design and display
There was a time when entry-level smartphones (other than the Lumias) were characterised by poor design and shoddy build quality. Not anymore. Lenovo K3 Note carries forward this welcome trend with a look and finish that is worthy of a more expensive smartphone. Though the design isn't unibody, there are no creaky parts in the K3 Note; the back cover, however, does feel a little flimsy when removed. But it's not something that users need to worry about on a day to day basis.

With the K3 Note, Lenovo is obviously going after those who prefer a big screen experience. Until now, if you wanted to buy a phablet but were on a tight budget, you had to put up with a display with low pixel density. By providing a full-HD panel on the 5.5-inch display, Lenovo has eliminated the need for this compromise. The display on the K3 Note looks sharp when compared to smartphones of a similar size and price bracket. The colour reproduction and viewing angles were satisfactory and outdoor visibility under soft, natural light was quite good as well.

The complete package?
Lenovo K3 Note seems tailor-made for the Indian market, ticking off the virtual checklist of things most important to an India customer: big screen, dual-SIM support, expandable storage, a removable battery, and 4G support in one of the SIMs. The latter is a new addition to what the Indian customer holds dear, and a Lenovo representative told NDTV Gadgets the company has been surprised at the quick uptake of 4G in the country. The company recently announced it had already sold over 10 lakh 4G phones in India. 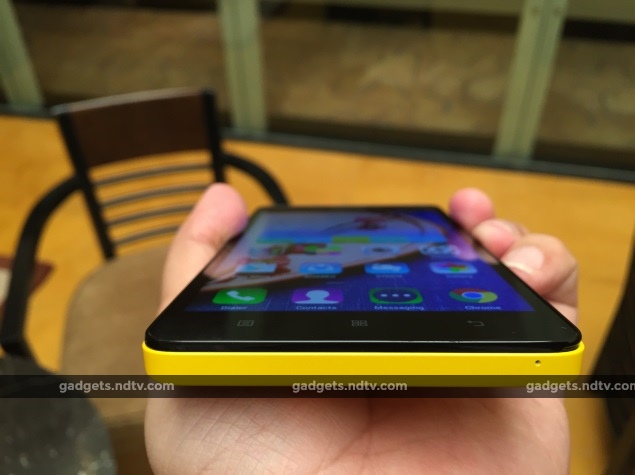 Lenovo K3 Note is powered by a 64-bit 1.7GHz octa-core MediaTek MT6752 processor that is coupled with 2GB of RAM, 16GB internal storage, and a 2900mAh battery. It packs in a 13-megapixel rear camera with dual-LED flash and a 5-megapixel camera. The selfie camera can be triggered in six different ways including timers, voice commands, and holding up the 'V' sign. Lenovo has also packed in other features and improvements targeted at shutterbugs, hoping the camera performance (and the full-HD display) will help the K3 Note stand out in a crowded market. We will reserve our verdict on its camera performance until we get a chance to put it through the paces for our detailed review.

Lenovo K3 Note will be offered in Onyx Black, Pearl White, and Laser Yellow colour variants, with the latter catching our eye in the brief time we spent with the smartphone. It will be available to buy exclusively via Flipkart, with the first flash sale slated for July 8. Stay tuned to NDTV Gadgets for a full review of the Lenovo K3 Note.

product Carrying a sub-Rs. 10,000 price tag, the Lenovo K3 Note has all the right ingredients to be the next budget smartphone king.