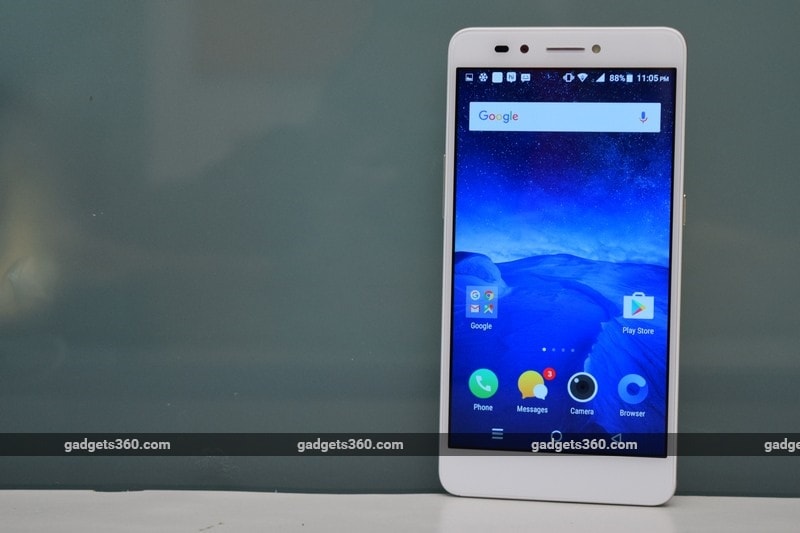 Lava is one of the many Indian companies affected by the massive number of affordable Chinese smartphones making their way into India. As buyers, we're obviously happy to see better features and lower prices, and that's exactly what we're getting with so many strong players battling it out in the market. Lava has been pretty low-key for the past year while attention has been focused on its competitors, but the company is now making a renewed effort.

The Lava Z10 and Lava Z25, which were launched just a few weeks ago, both boast of premium metal bodies and modern features including 4G and VoLTE support. The Z10 is priced at Rs. 11,500 which is a very hot category to be in. On the other hand, the Z25 is a bit more ambitious, and its launch price of Rs. 18,000 indicates that Lava wants to make a play for a more discerning audience.

We're reviewing the latter model today and while Lava boasts of features like its camera and battery life, the most interesting thing about it to us is the fact that it's the company's most expensive model, by a significant margin. This is new territory for the Indian stalwart, and we're eager to see what choices it has made.

Lava is quick to point out that the 88.6 percent of the Z25's body is metal, but while it might be new for the company, it isn't really out of the ordinary to us. The front of the phone has now-obligatory curved edges, but you can't really feel them because there's a plastic rim around the whole thing. Interestingly, Lava uses the term "2.5D" to describe the curves but goes to great lengths to avoid saying anywhere that the front panel is glass. There's no mention of reinforcement either, which is a cause of concern.

That said, the Lava Z25 is still pretty slick, and looks like it's been built well. It feels solid and we had no problem holding and using it with either one or both hands. This phone is available in either grey or gold, and our review unit was the latter. Thankfully, the colour is very subtle. We did notice scuffs on the plastic rim after a week or so of usage, which was the only disappointment.

The phone's layout is pretty standard, and we've seen this template plenty of times before, down to the antenna strips across the top and bottom of the rear. You'll find a 3.5mm audio socket on the top, a Micro-USB port and speaker on the bottom, volume buttons on the left, and power button plus SIM/microSD tray on the right. There's a camera flash and a notification LED above the display but nothing below it, since the Lava Z25 uses on-screen buttons. The main camera is in the centre of the top rear, with the fingerprint sensor below it. The only branding anywhere to be seen is a tiny Lava logo in the centre of the back.

While the Z25 is definitely a step up for Lava in terms of aesthetics as well as build quality, we're a bit concerned about how long this phone will hold up to the rigours of everyday use. It seems that the company is aware of this, because you get a flexible plastic shell and an adhesive scratch protector in the box, plus a one-time screen replacement in addition to standard warranty.

The Lava Z25 is built around a MediaTek MT6750 SoC, which has eight ARM Cortex-A53 cores running at between 1GHz and 1.5Ghz, plus integrated ARM Mali-T860 MP2 graphics. You get a generous 4GB of RAM and 32GB of storage, plus support for microSD cards of up to 128GB.

The screen measures 5.5 inches and has a resolution of 720x1280, which is a bit of a surprise considering that full-HD is quite common at this price level and below. The battery is sealed in and has a capacity of 3020mAh. The primary camera has a 13-megapixel Sony IMX258 sensor with PDAF and an f/2.0 aperture. The front camera has an 8-megapixel sensor and an f/2.0 aperture as well.

The hybrid dual-SIM tray has cutouts for one micro-SIM and one nano-SIM or a microSD card. The Z25 supports 4G as well as VoLTE, though only on one SIM at a time. Other connectivity standards include Wi-Fi 802.11n, Bluetooth 4.0, GPS, and USB-OTG.

The Lava Z25 runs a heavily customised version of Android 6.0 called Star OS 3.3. Predictably, it's a single-layer UI with all icons and widgets spread out across the home screens. This can be difficult to manage if you install a lot of apps. The Z25 uses on-screen buttons but even years after the Android layout was standardised, we're saddled with a useless Menu button instead of an app switcher - you have to long-press to see your recent apps. You can choose what order the buttons are displayed in, but can't change their functions. In some full-screen apps, the navigation bar kept disappearing when we needed it, and it took multiple swipes in order to just get back to the homescreen.

The Settings app is modified with the Sound and Display sections split off into their own tabbed menus (though there's still a Sound submenu under the main General section). There's no search function and it's sometimes difficult to find what you need. You can enable various tap and gesture shortcuts that will wake the phone and launch directly into some apps. This could have been useful for when the phone is lying on a table within reach, but with the fingerprint sensor on the back, it's often quicker to just pick the phone up. You can create your own gesture to trigger an app, function, or call/ message to a specific contact.

There's a massive amount of preloaded bloatware on this phone including five Jio apps and a link to download eight more. Star OS has its own browser (which wants all kinds of permissions including the ability to record audio) plus UC Browser and Chrome. There are redundant Notes, Gallery, Video, and Music apps in addition to Google's default ones. App World is a custom app store with seemingly only a few sponsored listings and some low-quality games. At least the third-party apps - Amazon, Hike, Gaana, Dailyhunt, Paytm, News Point, Game Hub and BeautyPlus Me - can be uninstalled.

Lava is touting the Z25 for its "stunning" photo quality, and we put that claim to the test. The app itself is an outright copy of the iOS camera app, but a bit clunkier because of the way settings are buried in submenus - for example, the HDR toggle is two taps and a swipe away. You get a "template" mode which overlays stickers and live information such as the time, weather and location. There's also a GIF mode which could be handy, and a "sound picture" mode which lets you record audio annotations.

"Intelligent" mode uses voice prompts to help you take selfies using the rear camera, which is a curious addition when the front camera itself is supposed to be good. Bokeh mode gives you instructions about composition and makes you hold the camera still while multiple shots are taken in order to blur the background, because there's only one camera. In our experience, shots taken in this mode looked no different to the same shots taken without it.

Photos came out just about okay, with nothing really special to boast about. Daylight shots tended to be a little washed out and textures didn't come through all that well. Autofocus was quick but not always accurate, and we also noticed a slight blur in some samples, possibly caused by low shutter speed. Photos taken at night were bright but only looked good on the phone's small screen. Checking them out in detail showed that there was a lot of noise, because the tradeoff is a loss of detail.

Video recording tops out at 1920x1080 for the rear camera but only 640x480 for the front, which is surprising. Quality was just about okay, but our expectations were higher considering Lava's positioning for this phone. Photos taken with the front camera were also just passable, nothing more. The front flash tended to be blinding and more distracting than useful.

It might have a clunky software layer, but this phone is no slouch when it comes to running apps. We had no trouble with installing, launching, and using apps. Games such as Dead Trigger 2 ran smoothly and the rear of the phone got only mildly warm. The screen's resolution is a bit low at 720x1280 but you'll only really notice a lack of sharpness if you hold this phone next to one with a full-HD panel. Colours pop nicely and sunlight legibility is decent.

Benchmark performance was good, though it should be noted that there are less expensive phones such as the Xiaomi Redmi Note 4 and Honor 6X that perform at the same level or better. We got scores of 41,228 in AnTuTu, 2541 in GeekBench's multi-core test, 5144 in 3DMark Ice Storm Extreme, and 22fps in GFXBench. That last score is boosted thanks to the low resolution of the Z25's screen.

The battery lasted a surprisingly good 10 hours and 58 minutes in our HD video loop test. We were able to get through a full day of moderate usage which included a bit of gaming, photography, and media streaming. We're beginning to take fast charging for granted, and it's disappointing that this phone lacks any such capability.

Verdict
Overall, Lava seems to have achieved a nice balance of features and capabilities. There's nothing pathbreaking about the Z25 but there's nothing drastically wrong with it either. It has no gimmicks such as dual cameras, and no one feature that stands out as a unique selling point. Despite the hype, camera performance was a letdown. The front-facing camera flash could be seen as an advantage, but there are specifically selfie-focused models such as the Oppo F1s (Review) and Vivo V5 (Review) which cost around the same amount.

The Z25 offers slightly better specifications and scores than the Samsung Galaxy J7 Prime (Review), but its main problem is that it goes up against several competitors from smaller brands which would be a step up at the same price. The recently launched Moto G5 Plus (Review) is the most obvious alternative at the moment. There are even less expensive options, such as the Xiaomi Redmi Note 4 (Review) and Honor 6X (Review), which offer similar or better performance at slightly lower prices. With such competition around, Lava needs to do a bit more if it wants to stand out.