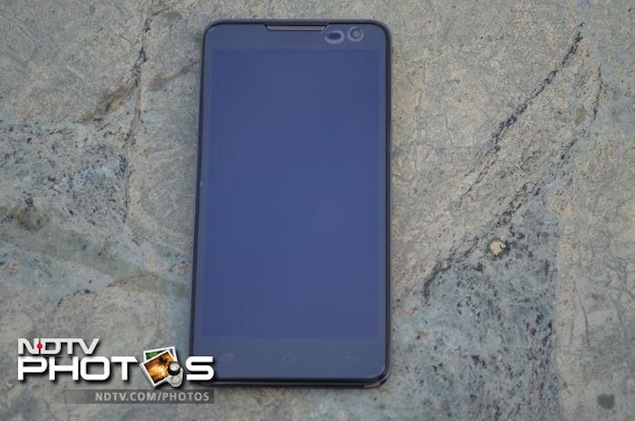 Following the launch of the Samsung Galaxy S4, the phone that made motion and gesture controls mainstream, we're seeing new phones from Indian handset manufacturers that offer similar features.

Lava was among the first ones to launch a phone with gesture control, with the Iris 504Q. While we've seen some gesture controls including flip to mute and auto-dial the number on the screen when the phone is brought closer to the face, the Lava Iris 504Q also responds to hand gestures without the need to touch the phone's screen.

With hardware specifications evolving to a level where there's little or no scope to scale up, at least in the phones' current price segments, the focus is now on adding value to existing products.

While some consider these extra features gimmicky, a number of people might choose phones that include these over other phones, just because they're curious about them. Also, a large number of people want their phone to be different from the ones owned by people in their peer group and like to flaunt the 'never before seen' features, even though they might not use them in their day to day life.

Gestures or no gestures, we're seeing budget Android phones evolve, bringing better displays, good performance and a refined feature-set to the segment. So how does the Lava Iris 504Q measure up when we consider all of these? We try to find out in our review.

Build/ Design
The Lava Iris 504Q looks like any other rectangular shaped slab from a distance. However, when you hold the phone, you'll notice that it's a well-made device, with a balanced weight to dimensions ratio. For a phone in this segment, the Iris 504Q looks more refined than its counterparts. It definitely looks more like a smartphone and not like a phablet.

The front panel, made of glass, is dominated by the phone's 720p 5-inch display. Capacitive buttons for Menu, Home and Back controls are located just below the display, while the sensor array and the 2-megapixel front facing camera sit above it, with the earpiece grill which is placed on the top. 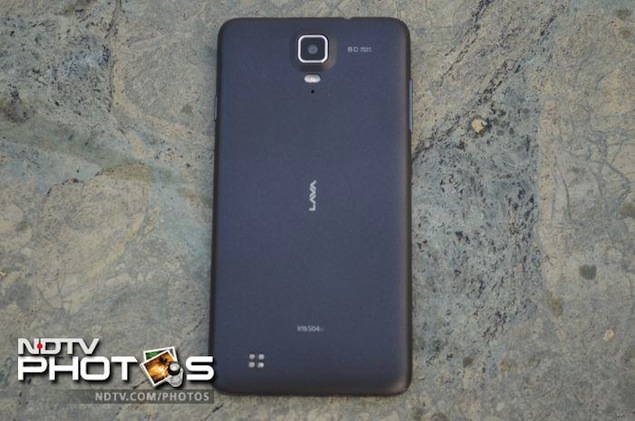 The Power/ Screen lock button is located at the right hand side, while the Volume rocker keys sit at the left hand side. The keys are made of plastic, offer good tactile feedback, and are easy to reach.

The 3.5mm headset jack and the Micro-USB port are located at the top of the phone, while there's just a microphone at the bottom edge. A metal finish frame separates the front and the back panels.

The back features a removable cover that's made of plastic but sports a soft rubberised finish facilitating easy grip. The 8-megapixel-camera lens and the LED flash are located towards the upper half, while a small speaker outlet is placed towards the bottom. There's minimalist Lava branding at the back.

The back cover hides the battery compartment, above which you'll find two SIM card slots and a microSD card slot.

Display
The Lava Iris 504Q comes with a 5-inch IPS HD screen that has a resolution of 720x1280 pixels and pixel density of 294ppi, which is pretty good, and graphics and text appear sharp. The viewing angles looked good, however, we found the screen brightness of the phone to be on the lower side affecting the outdoor visibility.

The screen is not very reflective, though. Videos and pictures looked good on the phone making it suitable for viewing multimedia content. Touch sensitivity of the panel was also good.

Camera
The phone features an 8-megapixel autofocus shooter that takes good quality images in daylight. However, we observed that pictures taken in low-light conditions did not come out that well. Also, at times colour reproduction was not that accurate with the pictures coming out a little oversaturated. Pictures taken indoors with less light were also a bit grainy.

The phone can record HD videos and we found that the quality of videos captured through the back camera was good. It also offers EIS or Electronic Image Stabilization to minimize distortions caused by shaking of hands while shooting a video. Unfortunately, the camera saves videos in the archaic .3GP file format.

The phone comes with a customized Camera app and allows you to capture photos in HDR, Multi-angle view and Panorama modes as well. It comes with the usual controls including settings for Exposure, Colour effect, White balance and ISO, among others. The phone's camera also supports continuous shots taking up to 99 shots in that mode, smile detection and face detection. 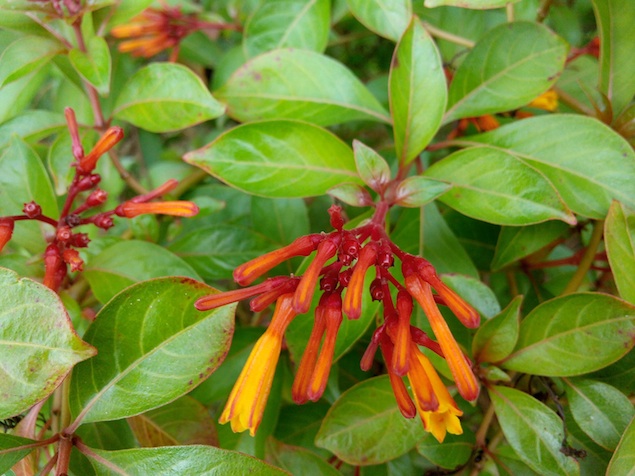 The 2-megapixel front camera takes above average shots and is great for video calls. Overall, we feel that the phone's pretty good for casual photography.

Software/ Interface
The Lava Iris 504Q runs Android 4.2 Jelly Bean. It's not clear if the company plans to update it to Android 4.3, which was released just last week but it does come with the ability to receive over the air updates.

While there's no deep user interface skinning, the phone does allow users to customise some parts of the phone including the app icons and the colour scheme, to their liking. It includes a Variety Theme app that includes five different icon themes, and an option to choose a colour scheme from Mint, Mocha, Raspberry and Default options via the Phone's Display Settings. 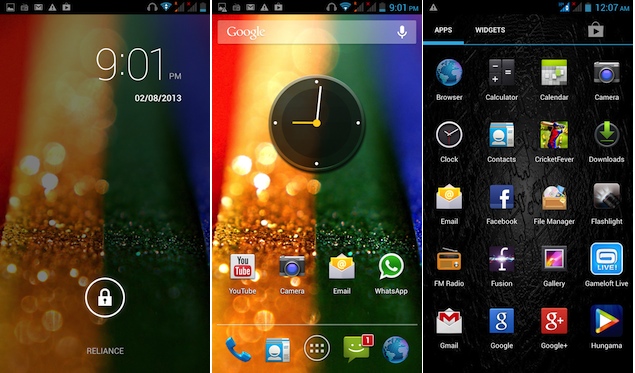 Other than that, the phone offers five customisable home screens that can be filled with app shortcuts and widgets. The notification tray also features a settings shortcut and a clear all notifications button, along with expandable notifications (expanded with the two finger pull gesture). It features the same setting toggles shortcut that's found in stock Android for quick access to Airplane Mode, Battery status, Wi-Fi, Bluetooth, GPS, Data connection, Data usage, Audio Profiles, Brightness, screen backlight Timeout and Auto Rotation.

The phone also offers another Android 4.2 feature, Daydream that displays photo albums or the clock while the phone's charging.

As we mentioned earlier, the phone features three capacitive buttons for navigation - Menu, Home and Back for respective functions with Home button doubling up as the task switcher on long press.

We'd like all manufacturers to switch to the three soft controls that are included in the Stock version of the OS. One major gripe with these buttons is that they don't light-up in the dark even when the screen is on until you press one of them.

Lava has also bundled some apps with the phone including CricketFever, a File Manager, Flashlight, Fusion (Lava's music player), Gameloft Live, Hungama, Modern Combat 2, MX Player, Opera Mini, PayTM, Shark Dash, a Sound Recorder app, a ToDo app Wonder Zoo (game) and WhatsApp. The phone also allows you to record phone calls. It also lets you set on and off timers to turn the phone on or off at set times. 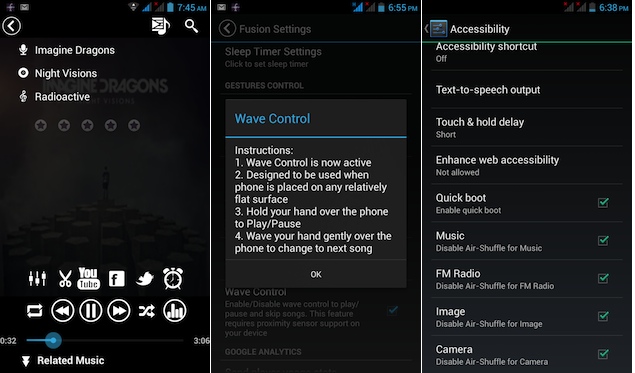 As we mentioned earlier, the phone's gesture and motion controls are its USP. These features are integrated with select apps. The gesture control features allow users to click photos, change tracks or pause tracks on the music player and video player, tune FM radio channels and browse the gallery on the phone without touching the screen of the phone. The gesture controls can be activated through the phone's Accessibility settings.


In our use, we found that these features worked intermittently. To browse photos or change music tracks, you need to move your hand in front of the phone's proximity sensor in a rather slow manner, for the phone to register the gesture. We found this to be a bit cumbersome. Also, the phone's Music player pauses a track when you move your hand slowly and changes it when the movement is faster. Due to this, you'll be left pausing tracks instead of changing them, and vice versa, if the movement of your hand is not detected by the sensor. We feel that the gesture control feature is gimmicky at best and doesn't help in increasing your productivity. You'll end up wasting more time trying to get these gestures right instead of completing your task.

Performance/ Battery Life
The Lava Iris 504Q is powered by a 1.2GHz Mediatek MT6589 quad-core processor. It has 1GB RAM, and PowerVR SGX 544MP chip for processing graphics. There is 4GB of internal storage, which is expandable up to 32GB via a microSD card.

With Android Jelly Bean, the overall experience of navigation through the interface was impressive. We did not experience any lag while launching apps, playing games, scrolling web pages or switching between apps. The phone offers good performance for its price.

We were able to play full-HD clips smoothly and the phone supported formats like .AVI and .MOV, natively, though we had problems related to audio while playing .MKV files. This can be easily fixed by using a third party app. 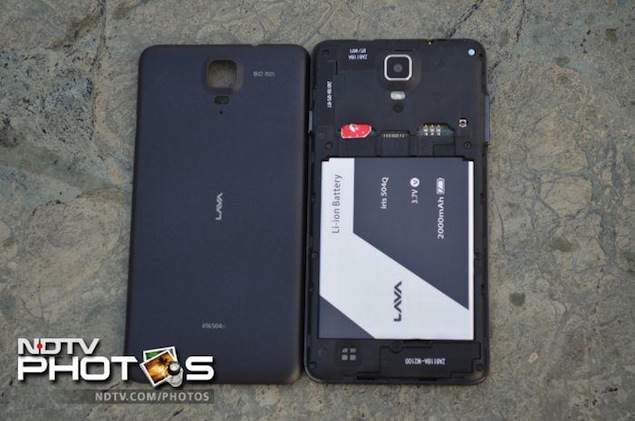 The speaker on the phone delivers decent quality sound at high volume levels, but there's some muffle when the phone lies on its back, as the speaker outlet is located on the back.

Call quality was good, during our testing process. The phone was also able to get a GPS lock rather easily while using the Maps app.

The phone comes with a 2,000mAh battery, and based on our experience, it will last you a full day with medium to heavy usage, including 1-1.5 hours of phone calls, two e-mail accounts with push notifications, screen at maximum brightness, playing some music and video clips, Twitter notifications and WhatsApp chats. It's also worth pointing out that we had turned off Wi-Fi and auto-brightness, and the phone was hooked to a 3G network during our use. Altering these settings might help in running the phone for a longer duration, depending on your usage pattern.

Verdict
The Lava Iris 504Q is a good option if you're looking to buy a decent smartphone and have a limited budget. However, the bells and whistles offered in the form of gesture control features are gimmicky and you'd be better off disabling them. Other than that the phone gets it right with its premium design and good feature set. 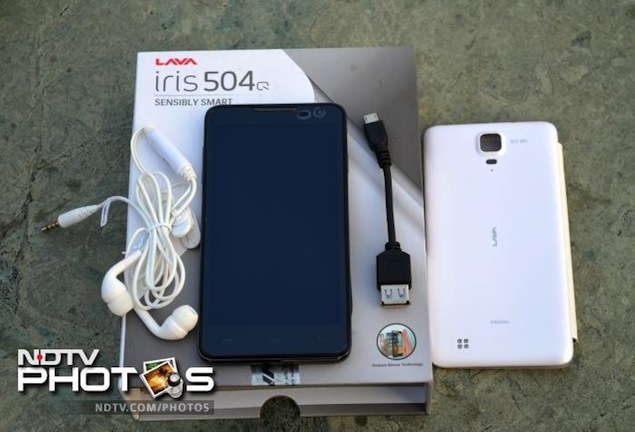 We found the phone's performance comparable to that of the Zen Ultrafone 701HD, which is available at a lower price (Rs. 11,999). You could also look at the Karbonn S5 Titanium, if you don't mind its qHD screen.

Facebook stock closes above $38 IPO price for the first time
Obama administration overturns US import ban on some iPhones, iPads