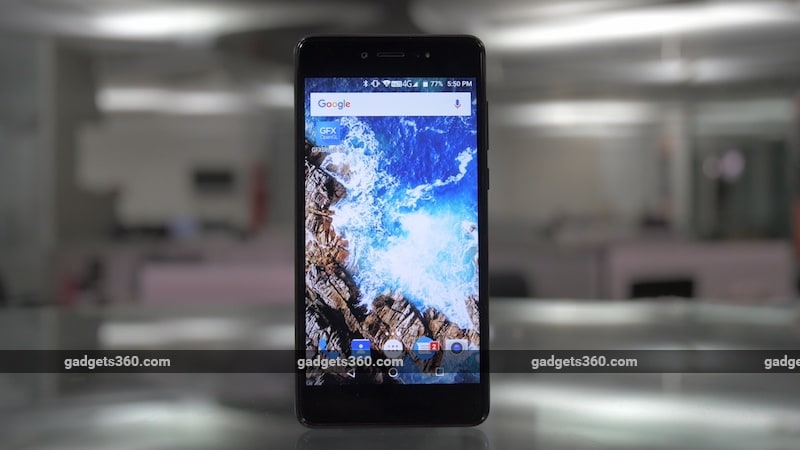 Some smartphone companies try to make a mark with high-end flagships, but the entry-level segment is still where most of the action is, and plenty of companies focus only on the low-end. Kult is one such brand, and has been launching a steady stream of such products for a while now. Interestingly, Kult is a brand from Optiemus Group, the same company that is now behind BlackBerry in India. The Kult Gladiator is a recently launched model that is priced at Rs. 6,999 and boasts of some decent specs. Let's see how it compares to the big names, and whether this is a good budget smartphone to pick.

One look at the Gladiator and we can say that the device looks quite premium. Kult has used metal in its construction and the phone has a metal backplate between plastic end caps. Sadly, there are variations in the finishes, and the plastic is curved while the metal panel has chamfered edges. The Gladiator is available in black, and while we like the finish, we must say that it picks up fingerprints easily. Hold it in hand and the first thing you notice is the weight of the phone. At 180g, this is among the heavyweights in its price range.

The Gladiator has a 5.5-inch display at the front, with on-screen buttons for navigation. It has an 8-megapixel selfie camera along with a selfie flash. The earpiece is recessed and might pick up pocket lint easily. The power and volume buttons are positioned on the right, and while the power button is easy to hit, the volume buttons require you to stretch your thumb. At the back, there's a 13-megapixel camera with an LED flash and a fingerprint scanner positioned below it. The Micro-USB port and the 3.5mm headphone socket are positioned on the top.

At first, it seems as though the Gladiator has a sealed unibody, but on closer inspection you see a tab to pop the back open. The rear is removable, and gives access to the SIM slots and dedicated microSD card slot. However, the 4000mAh battery is non-removable. To charge it, Kult has provided a 7.5W charger in the box.

Like most other manufacturers, Kult has stuck to a fairly common configuration for the Gladiator. It is powered by a MediaTek MT6737 quad-core processor with all four cores clocked at 1.25GHz. There is 3GB of RAM and 32GB of internal storage which is expandable using a microSD card of up to 32GB.

The 5.5-inch display sports a 720p resolution which works out to a density of 267ppi. The Kult Gladiator is a dual-SIM device and has two Micro-SIM slots. There is 4G support on both SIM cards but only one SIM can access the 4G network at a time while the second SIM is restricted to 2G speeds. For connectivity, there is Bluetooth 4.0, WiFi b/g/n, and USB-OTG.

Software was until recently a constant issue with low-end Android smartphones, and they often shipped with severely outdated versions of Android. The Gladiator runs Android Nougat which isn’t the absolute latest but is still mainstream. Kult hasn’t done a lot of customisation to the UI, and you get a stock Android experience. Other than a few Google apps preinstalled, we could only find Opera Mini and Vistoso, a photo editing app which lets users print edited photos onto t-shirts and coffee mugs. With the phone relatively bloat-free, there was roughly 20GB of storage available to the end-user.

There's one word to describe our experience with the Kult Gladiator: average. Colour reproduction is decent and you do get the option to tweak the output. However, viewing angles aren’t all that great. We saw a shift in colours when looking at the screen at an angle. Sunlight legibility is also just about average, and you might have to shield the screen with one hand when using this phone outdoors. The fingerprint scanner was quick to unlock the phone.

The hardware is similar to that of other smartphones in this price range, and so are the benchmark scores. The Kult Gladiator managed to score 2,923 in AnTuTu, as well as 549 and 1540 in Geekbench's single-core and multi-core tests respectively. In GFXBench, the phone managed only 11fps. While these are relatively decent numbers, the real-world usage experience is what matters. Apps took a lot longer to load than we expected, and there were occasional slow-downs.

The gaming experience was similar, as big titles like Real Racing 3 took a long time to load. We also noticed the phone dropping frames occasionally. We also played Clash Royale which is light on graphics but network-intensive, and found that it drained the battery much faster than Real Racing. If you are into online multiplayer games, you might want to keep an eye on the battery level.

Battery life is where we expected the phone to deliver its best scores, because of its 4000mAh battery. However, in our HD video loop test, the phone survived for 9 hours and 43 minutes before throwing in the towel. This is a lot less than the similarly configured Intex Elyt-e7 (Review), which managed 12 hours and 18 minutes under similar conditions. The Gladiator will deliver one day of battery life with light use, but charging does take a long time when using the supplied 7.5W charger.

Kult has used a very basic camera app and you have limited modes to play with. You get panorama, video, photo and beauty modes, plus an HDR toggle. You also get a shortcut to the Vistoso app built into the camera app. One issue we had with the camera is that you can't take multiple shots rapidly. Photos taken with the Gladiator in daylight turned out well, with nice details and decent colours. However, performance is disappointing in low light. This phone takes a while to save photos, and you'll also need a steady hand if you want usable shots. We saw ghosting in a few of our samples. Noise is kept low, but details are not brought out well at all.

The front camera takes usable photos but you’ll need to hold the phone steady, especially in low light. HDR can be turned on for the front camera as well, and we found the selfie flash to be helpful in low-light conditions. Video recording resolution maxes out at 720p for both cameras. Automatic refocusing takes some time, but you can tap the screen to force it. There is an option to enable electronic stabilisation for both cameras, but we did not see any significant difference in the output.

The Kult Gladiator offers decent hardware and software for the segment it is positioned in. The processor and RAM are enough to offer a steady, usable experience. However, this phone's cameras aren't that great, and battery life is disappointing. Overall, it is a decent device but this is a very crowded market, and we would recommend that you have a look at our top picks before making a buying decision.