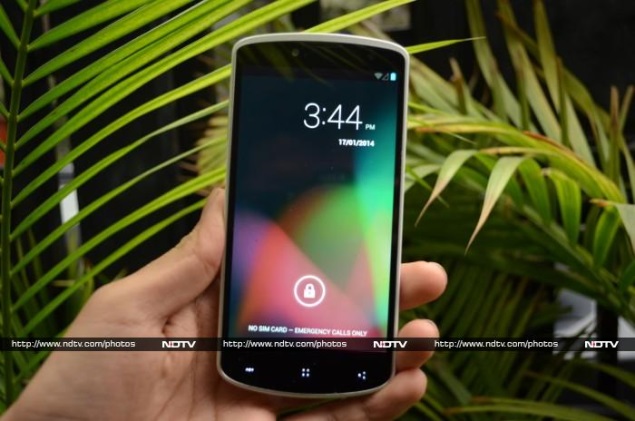 One of the most remarkable trends in the Indian mobile industry over the past few months has been the rise of smartphones sporting full-HD screens. Although such devices used to cost a lot of money in the past, a number of companies are now releasing more wallet-friendly models. The trend in the country might have been set by global brands, but Indian domestic handset makers are not far behind.

Micromax was the first Indian brand to join the full-HD bandwagon with its Canvas Turbo launched last year. Now, after a period of relative quiet, Karbonn has marked its return to the Indian market with its first smartphone with full-HD display, the Karbonn Titanium X.

Karbonn is clearly in the mood to win significant market share, and it's back with a vengeance in terms of both specifications and price. But does company's first full-HD smartphone, the Titanium X, pack enough punch to overcome more established players such as Samsung, Micromax, HTC, LG and Xolo? We take a closer look.

Look and feel
The Titanium X is a departure from the company's usual Android smartphone design, and it looks like a lot of time was spent on the design stage. The Karbonn Titanium X is definitely light at 143 grams, and sports rounded edges. It is sturdy, but it might be a little too wide for single-handed operation, and those blessed with smaller palms will find it tiring to carry the device around. 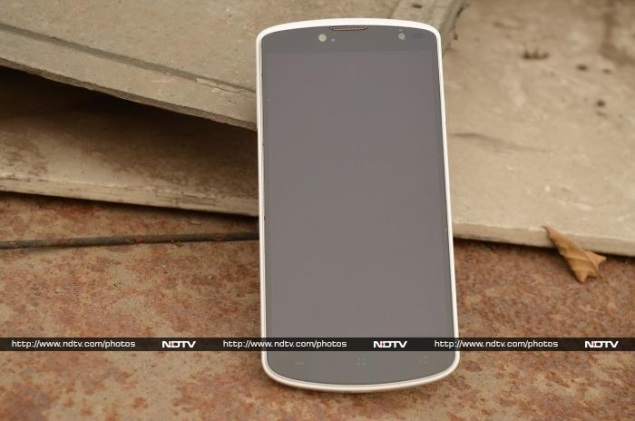 The 5.0-inch full-HD display takes up most of the space in the front with a silver lining around the edges. Like most other smartphones, the ambient light and proximity sensors are lined up on top alongside the earpiece and front-facing camera. We were amazed to see the 5-megapixel front-facing camera accompanied by an LED flash at the top. We assume that it's meant to be helpful for taking selfies. Beneath the display one can find the Home, Back and Menu capacitive buttons marked by dotes, rather than the standard Jelly Bean icons. Notably, the front has no logo branding, much like Nexus smartphones. 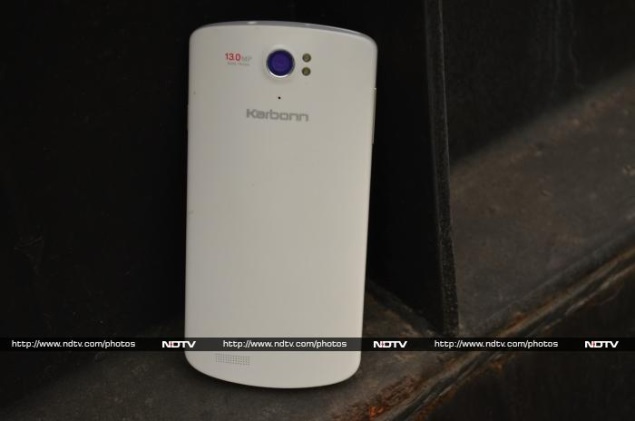 The Titanium X's back is made of shiny plastic and tends to slip out of the hand during prolonged usage. The plasticky rear panel houses a 13-megapixel camera with dual LED flash, and there's a loudspeaker at the bottom left. There is a Karbonn logo just beneath the rear camera. The power button is on the right panel and we had no problem hitting it anytime, while the volume rocker buttons are placed on the left side. We wish the volume controls had been placed a bit lower on the left panel, because at times we had to use both are hands to adjust the volume. The top panel houses a 3.5mm audio jack accompanied by the SIM tray, and the Micro-USB port is on the bottom. Getting to the SIM card tray on the Titanium X can be a problem as you have to open a flap next to the headset jack and then insert a pin to pop the tray out. The process takes some effort, and isn't intuitive at all. 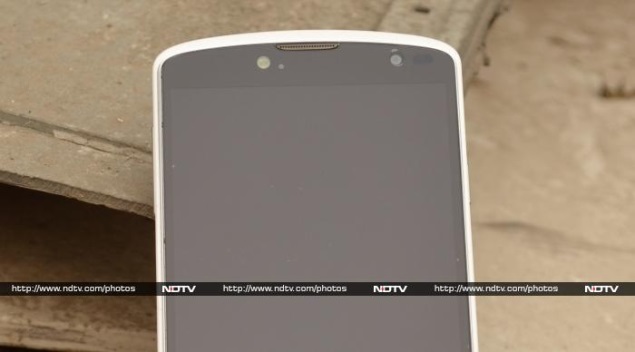 At a glance you might think the Karbonn Titanium X uses a unibody design, but it has a removable back panel even though the battery is non-removable. Unfortunately, this phone is only available in white.

Display
The screen of a smartphone is a critical aspect to consider when making a purchase decision, and of late, smartphones such as the Spice Pinnacle FHD, Wicked Leak Wammy Passion Z Plus and Micromax Canvas Turbo have hit the market, all with full-HD displays and all priced under Rs. 20,000. The Karbonn Titanium X now joins the same club. An HD screen might not make a difference to many people, but when you hold one of these phones up next to a device with a low-resolution screen, you can see the difference. 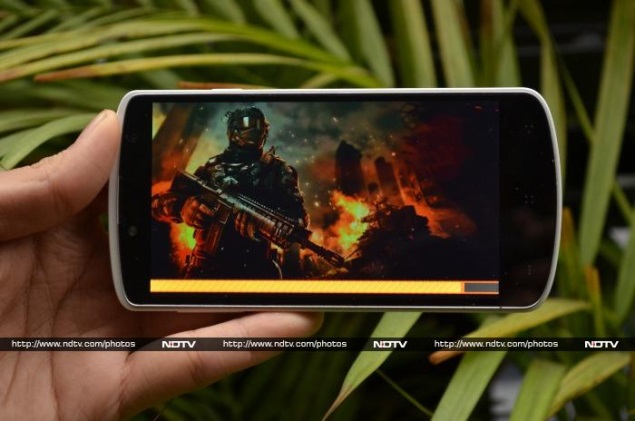 The Titanium X features a 5.0-inch IPS full-HD (1080x1920 pixels) screen with pixel density of 441ppi. The panel attracts a lot of smudges, but nothing that cannot be wiped away quickly. The screen has decent viewing angles and though colour reproduction is not the best, it gets the job done.

Since the Titanium X is equipped with an IPS display, we found that it was good to read text on. Browsing the Web and prolonged reading on the device were also relatively comfortable, thanks to the large screen. The touch response of the Titanium X works smoothly. 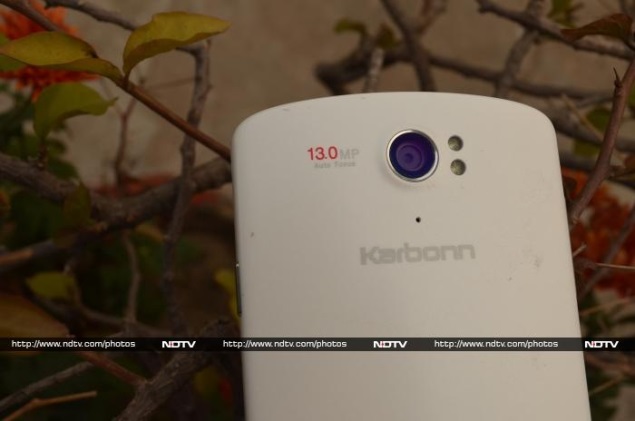 In terms of photographic ability, Karbonn has equipped the mid-range Titanium X with a 13-megapixel autofocus rear camera accompanied by a dual-LED flash. The rear camera offers 4x digital zoom, HD (1080p) video recording, touch to focus and a panorama mode. The Titanium X also includes HDR mode for video recording, which has been seen on some high-end Android smartphones. Other features seen in the camera app include portrait retouch, self-timer, self-portrait voice guide, smile shutter, focus mode, and ISO and exposure value adjustment. The rear camera can click images at a maximum resolution of 4128x3096 pixels. 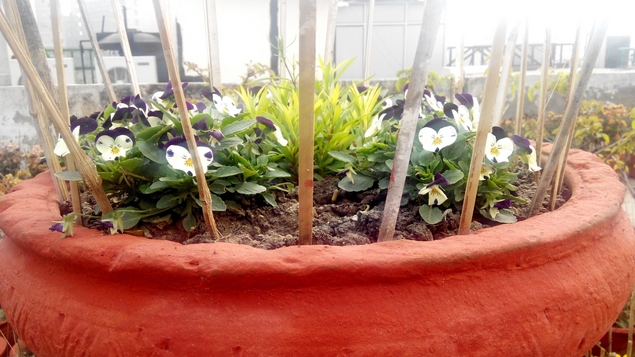 We were disappointed with the camera, which, in spite of a number of shooting options, did not really match up to our expectations. We tested the Titanium X's rear camera in outdoor, dim and indoor environments, and found that picture quality was average, with washed out colours and grainy edges. The photos taken under well-lit conditions were somewhat better than those taken in low light, which had a lot of noise. 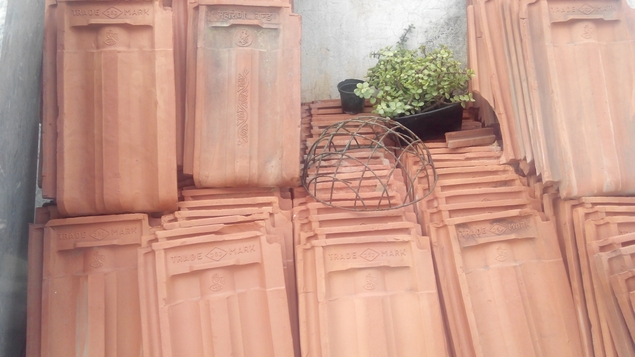 Notably, the camera shutter is comparatively slower than the other Android smartphones, which means this phone is only good for taking pictures in a pinch. 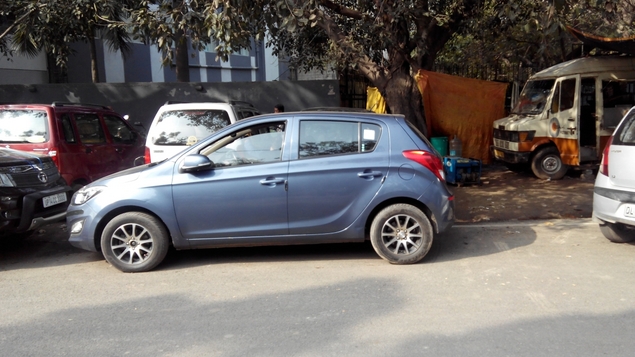 The front facing 5-megapixel camera on the Titanium X is pretty decent compared to other mid-range Android devices and can be used for video calls over Skype and, of course, taking selfies. We found videos and images captured both indoors and outdoors through this camera to be a bit grainy. The company has added a front-facing LED flash, which comes in handy when clicking in low-light.

Software/ Interface
At a time when the world is waiting for Android 4.4.2 KitKat to arrive on its handsets, Karbonn has used Android 4.2 Jelly Bean for the Titanium X, which is disappointing. 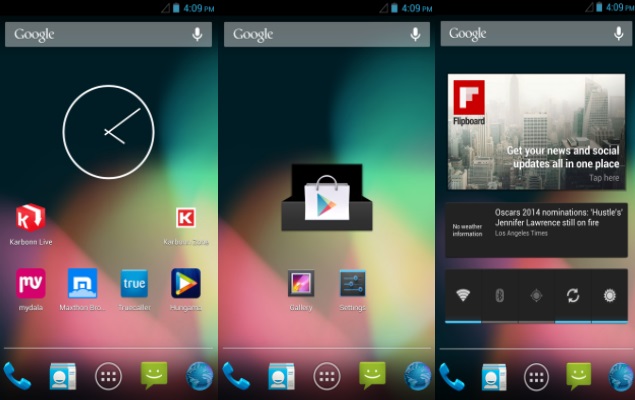 The Karbonn Titanium X ships with Android 4.2.2 out of the box. It might not be the most up-to-date, but it's the most popular version of Android on mid-range smartphones in India at the moment. We are yet to hear any details about Karbonn's plans to update the Titanium X.

Karbonn is using some skinned elements such as app icons. Although the changes are not as radical as HTC's Sense UI or Samsung's TouchWiz UI, a few neat touches have been added to the OS without becoming intrusive.

Similar to other Android 4.2 devices, the notifications tray on the Titanium X features a settings shortcut and a 'clear all' button. On expanding the settings button one can find options for quick access to the user profile, airplane mode, battery status, Wi-Fi, Bluetooth, GPS, data connectivity, data usage status, audio profiles (for alerts and other notifications), brightness, display timeout and auto rotation.

The Karbonn Titanium X comes with standard Android features such as the lock-screen widgets. One can choose from Calendar, Digital Clock, Gmail, Google Now, Google+ posts and Messaging along with any third-party widgets. These show information and help in performing actions quickly, even without unlocking the device. Users can also launch the camera directly from the lock screen by pressing the power button and then swiping to the right of the screen.

The native Music and Video apps on the Titanium X offer very basic functions. The music player does not offer many options while listening to music, and the default video player was unable to support some popular video formats like .AVI and .MKV. This isn't a problem thanks to the easy availability of third-party video players. 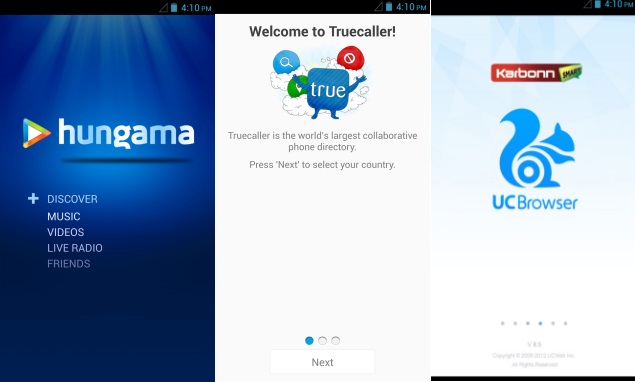 Performance/ Battery Life
The Karbonn Titanium X is powered by a quad-core MediaTek chipset (MT6589T) clocked at 1.5GHz along with 1GB of RAM and PowerVR SGX544 GPU. MediaTek's updated MT6589T processor was launched last year, so it should perform quite decently. Unfortunately, this didn't translate to real-world performance. We found that the Titanium X lagged when launching some apps. Admittedly, the lag is not consistent but considering that this is a quad-core processor, it is quite disappointing. 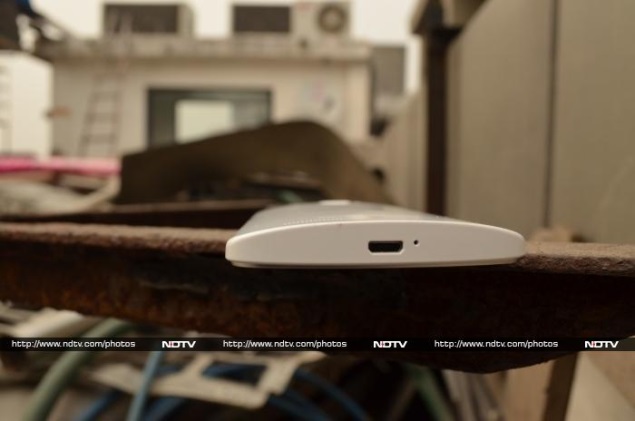 It came as no surprise that the benchmark scores were not impressive at all. As expected, the Karbonn Titanium X barely made it through our synthetic benchmarks. The CPU performance scores were not impressive: the phone scored 14,930 in AnTuTu and 5,701 in Quadrant. On the graphics front, it only managed to push 3.4 frames per second in the GFXbench test, while it scored 1735 in the 3DMark Ice Storm Extreme runthrough.

There is 16GB of storage on the Titanium X, which is further expandable up to 32GB with the help of a USB device plugged in using OTG (USB on-the-go). The company supplies an OTG adapter in the box.

Call quality on the Karbonn Titanium X was impressive and we did not encounter any problems with the clarity and volume through the earpiece grill. 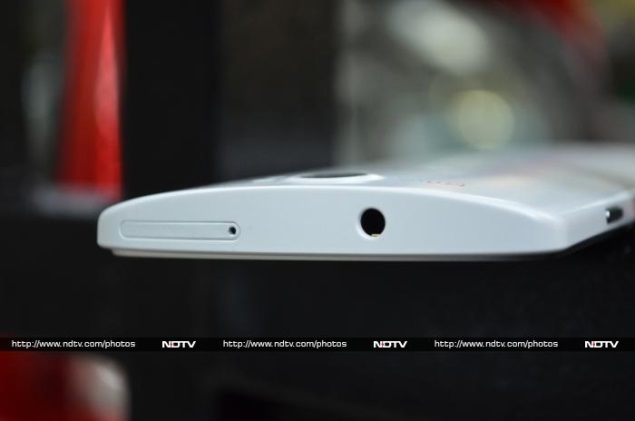 The Titanium X lasted for around 7 hours of continuous video playback, which is not all that great. We played some music on the Titanium X through its speakers, and the sound was distorted at high volume. However, the experience on the supplied earphones was better.

The Titanium X ships with a 2300mAh battery that can deliver up to 240 hours of standby and up to 6 hours of talktime, according to the company. Based on our observations, the Titanium X is a decent performer when it comes to battery performance. We were able to get about 12-14 hours with normal usage on the Titanium X, during which Wi-Fi was switched on all the time and the screen brightness was set to auto. We browsed the Web for more than an hour and made a few calls totalling about two hours, and had the usual notifications for messages, emails, Facebook, Twitter and WhatsApp coming in.

With heavy usage of the Titanium X, during which the screen brightness was set to full, and 3G was active throughout, we made calls for about an hour, took a few casual photos and tweaked them a bit with third party camera apps. We then watched a few YouTube videos for around two hours and then spent two to three hours gaming. The device lasted for about 8-9 hours, so using more reasonable settings obviously helps in making the battery last longer. 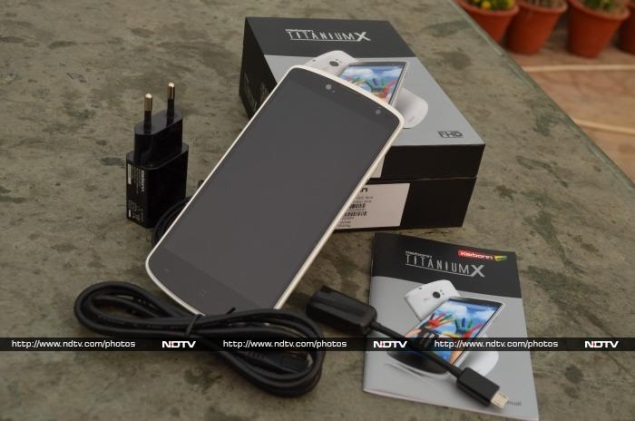 The Karbonn Titanium X is a mix of good and not-so-good. The 5.0-inch full-HD display is no doubt the USP of the device and is great for watching videos on, but colour reproduction can be a bit of a damper. Notably, the Titanium X has a tendency to slow down when multiple apps run in the background. Further, the images clicked by Titanium X are also not good enough, and the screen is barely visible in sunlight. Battery life is acceptable without being exceptional.

The Karbonn Titanium X is not a perfect phone by any means, but when you consider its price tag, it is not a bad performer at all.

Those looking for alternatives can consider the Micromax Canvas Turbo, (Review) which again sports a full-HD display. For those who would like to consider a Windows Phone can consider the Nokia Lumia 625 which offers a 4.7-inch screen.

Intel AppUp marketplace for PC to shut down on March 11
Facebook may be making people more polarised: Study