Six months after the launch of the Karbonn Mach One Titanium S310, the company has launched its successor, the Karbonn Titanium Mach One Plus. The smartphone features strong integration with the Swiftkey keyboard, which allows users to type in different Indian languages. According to SwiftKey's Country Head, India, all the 22 languages mentioned in the Indian constitution are supported by the keyboard.

At the launch, we got to spend a little time with the phone, and our first impressions were mostly positive.

Design
Considering how reasonably priced the phone is, the design is pretty good. There's no visual features that stand out, but the sleek shape with gentle curves looks nice. We got to use the black colour, but there's also a white version that looked pretty nice. The placement of the buttons on the right edge of the phone is fairly standard, but the Micro-USB port and 3.5mm audio port are both on the top edge of the phone, which is slightly unusual. The bottom doesn't have any ports, but there are speaker grilles on both the left and right sides of the bottom edge. 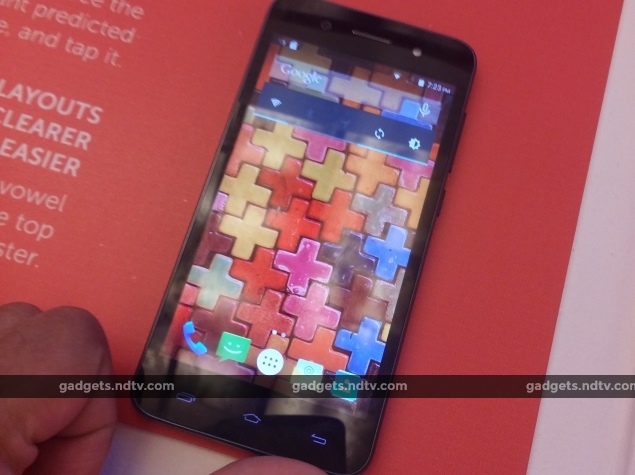 The phone won't win any awards for design, but its simple looks are pleasing in an understated way. The phone was also pretty comfortable to hold and use, and while a 4.7-inch size is on the smaller size these days, it is still definitely big enough to allow you to comfortably read text on screen, or browse through images.

Specifications, Software, Camera
In terms of specifications, the phone is extremely similar to its predecessor and both have a 4.7-inch screen at a 720x1280 pixel resolution, powered by a 1.3GHz quad-core Mediatek processor, and 8-megapixel and 5-megapixel rear and front cameras. The new phone sees an improvement in terms of storage and RAM - the phone has 16GB of storage built in, and 2GB of RAM; doubling the specs of the previous version. The Android version has also moved from version 4.4.2 to version 5.0. 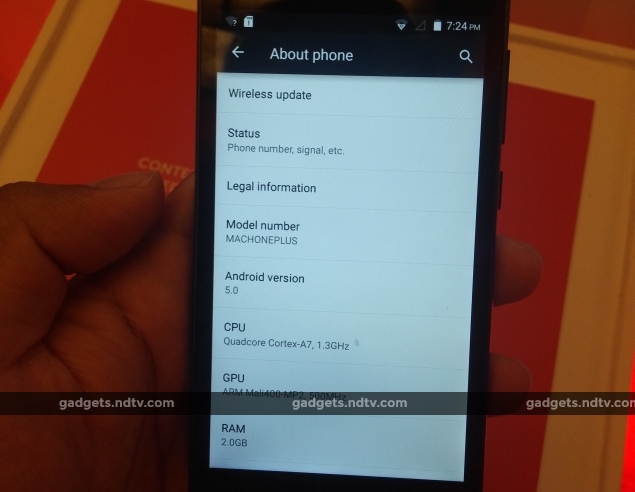 The software looks to largely be standard Android, but there are a number of small tweaks from the Karbonn team. This includes gesture support on the home-screen to quickly launch apps, and you can double tap on the home screen to turn the screen on or off, instead of using the power button. The camera also has a wink to click function. Aside from these small tweaks, there's also the pre-loaded SwiftKey keyboard. SwiftKey has created a special theme only for Karbonn's users, which integrates with the overall look of the phone's interface. It's a nice touch, and a very short experience with the phone didn't immediately raise any red flags.

We tried using the camera, but couldn't take the phone outside the room in which the press conference was taking place. The resulting pictures were pretty bad, without much detail, and grainy too. However, this could easily be a question of really bad lighting, and we'll know better once we can do a full review of the phone.

Final Thoughts
Overall, this phone looks like a good budget device and the support for typing in 22 Indian languages is a nice feature to talk about. Of course, you could just download the SwiftKey app from Google Play (or the App Store on an iPhone) and use it on any device. Sashin Devsare, Executive Director, Karbonn Mobiles mentioned that the company is looking at integrating support for all 22 languages throughout the interface, so you can use the phone in the language of your choosing, but that's for later.

Stay tuned for a detailed review of the Karbonn Titanium Mach One Plus on NDTV Gadgets.

Karbonn Titanium Mach One Plus