iVoomi Me1 and iVoomi Me1+ Review

Chinese smartphone maker iVoomi has been in the Indian market for a few months now. Like most others, it has started at the lower end of the market. While the iV505 was the first iVoomi model to make it to Indian shores, the company has now launched the iVoomi Me 1 and iVoomi Me1+ at Rs 3,999 and Rs 4,999 respectively. In a price band where the spec sheets of most smartphones look dreadful, these devices actually might have something to offer. We were pleasantly surprised to see a sub-Rs 4,000 phone with 1GB of RAM and an HD display. While the features look good on paper, do they translate well in terms of real-world usage? Let's find out.

iVoomi Me 1 and Me 1+ design and build quality

Design isn't the strongest suit for most entry-level smartphones. Manufacturers generally give function preference over form, and iVoomi has done the same thing. It looks like corners have been cut when it comes to build quality, and both phones feel plasticky. The two look similar and have the same general physical characteristics. Their build quality is average at best.

Both phones sport 2.5D curved-edge glass on the front but there is no mention of any sort of protection. Plastic screen protectors are pre-applied, to keep them from picking up scratches. The screens have thick black borders, and below them are non-backlit capacitive buttons that are arranged in the opposite order compared to stock Android. 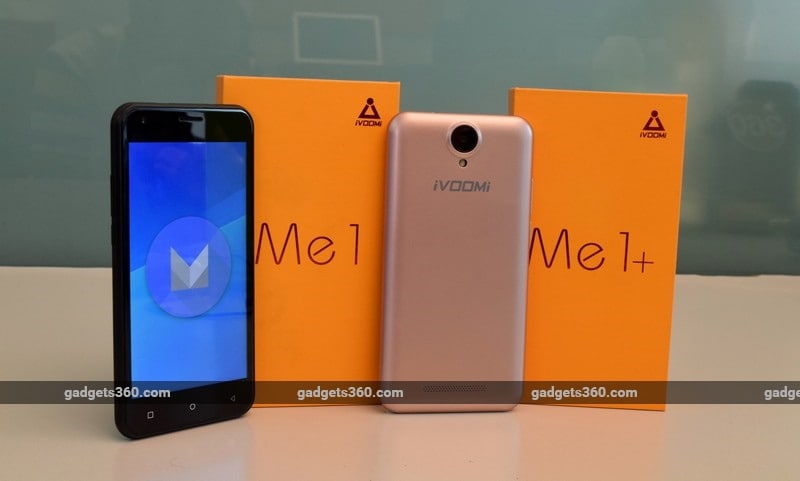 At the back, each phone sports a camera along with an LED flash. The cameras protrude slightly, causing the phones to rock when kept on flat surfaces. Also, the cameras will make contact with pretty much any surface you keep the phones on, which could result in scratches over time. Towards the bottom are the rear mounted speakers, which aren't all that loud. What makes this worse is that the speakers get blocked completely when these phones are placed on a table, resulting in quite a few missed calls and notifications.

The phones both have Micro-USB ports and 3.5mm audio sockets on the top, while the bottoms only have a microphone pinhole. The back covers are removable on both smartphones, giving access to the SIM slots, microSD card slots, and removable batteries. Both phones accept two Micro SIM cards, with a microSD slot above the second SIM slot. They support 4G and VoLTE so you can pop in a Reliance Jio SIM and use it right away.

iVoomi Me 1 and Me 1+ specifications and features

Looking at the spec sheets we were impressed to see 5-inch HD displays on both iVoomi models. This puts them among the few phones to support such a resolution at this price point. However, while the resolution is relatively high, the quality isn't all that good. Colours are fairly accurate but viewing angles aren't great. Neither phone has an ambient light sensor so we were constantly forced to adjust the brightness manually. Brightness is good but the screens are still hard to read under direct sunlight. 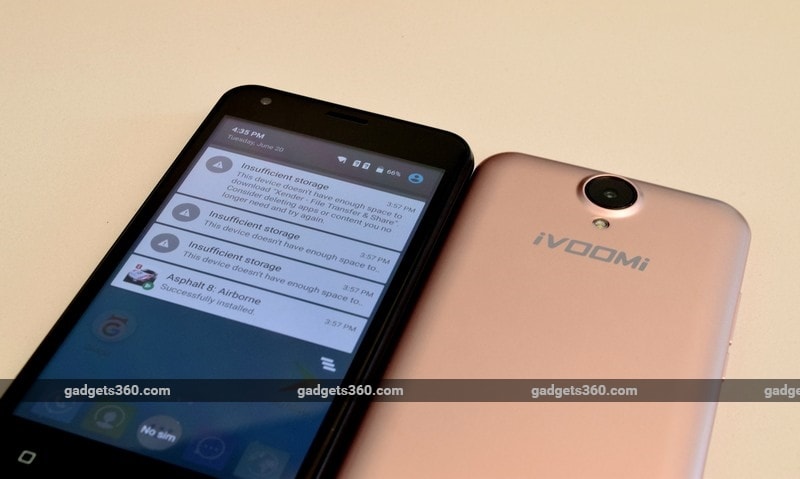 Touch response time and accuracy aren't great either. There were times when we had to tap multiple times for the display to accept the input. Also, we were more likely than usual to make mistakes when using the onscreen keyboard. The capacitive touch buttons have similar problems and are also positioned a little farther apart than usual which makes it harder to hit them based on muscle memory.

On top of this is the lag, which is a lot more noticeable on the Me 1 because it only has 1GB of RAM. The Me 1+ with 2GB of RAM lagged less in comparison. Storage is another issue with the Me 1 as it has to make do with the 8GB of internal storage out of which a little over 3GB is used by the system leaving you with less than 5GB of storage to work with. The Me 1+ is a little better with 16GB of internal storage, out of which you have around 12GB at your disposal. Powering both smartphones is a Spreadtrum SC9830 quad-core processor clocked at 1.5GHz with an integrated Mali-400 GPU.

iVoomi Me 1 and Me 1+ software and performance

The iVoomi phones run a stock version of Android 6.0 Marshmallow with a few apps and tweaks thrown in. The manufacturer has added gesture support which lets you draw alphabets on the screen to launch apps. You can draw the alphabet C to launch the camera, or to launch the stock browser when the screen is switched off. While this works on the iVoomi Me 1, it takes a long time, almost like the phone is trying to match the entire alphabet one by one to figure out what you've drawn. Surprisingly, the iVoomi Me 1+, on the other hand, refused to accept any gesture input other than a double-tap to wake. 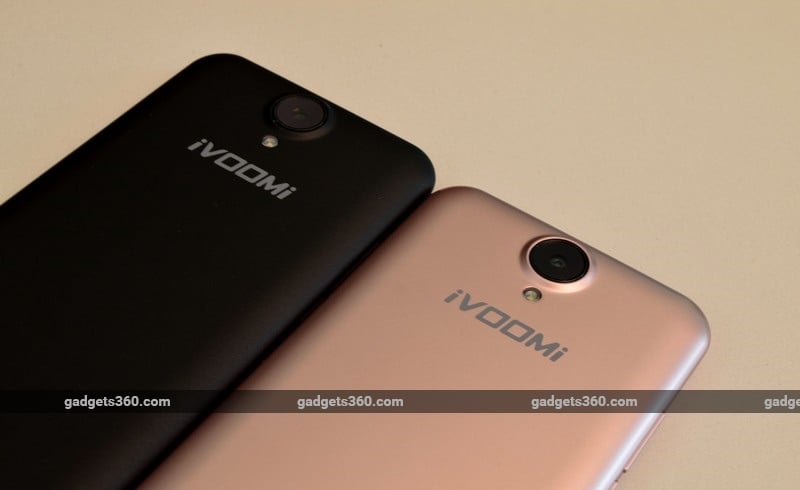 iVoomi has installed apps like CallFireWall which lets you block calls and messages from certain contacts. There is also a call recording app called Super MyCall Record. Both phones get FM Radio and there is an option to record live radio as well. For viewing photos and videos there are Gallery and Video Player apps. The QuickTouch app enables a floating button on the display which offers multiple shortcuts including launching the camera and taking a screenshot.

The performance of both the phones is average considering the asking price. The Spreadtrum processor is obviously not the best out there, but is slightly better than what other manufacturers offer at the same price. With light to medium use, we found the Me 1 to have around 300MB of RAM free while the Me 1+ had about 1.3GB of RAM free. The iVoomi Me 1 managed to score 26,513 in Antutu, and 449 and 1,229 in Geekbench's single- and multi-core tests respectively. The iVoomi Me 1+ managed only very marginally better with 26,697 in Antutu, and 450 and 1,257 in Geekbench. In our HD video loop test, the iVoomi Me 1 managed to last for 8 hours, 48 minutes while the Me 1+ managed 10 hours and 4 minutes before shutting down. 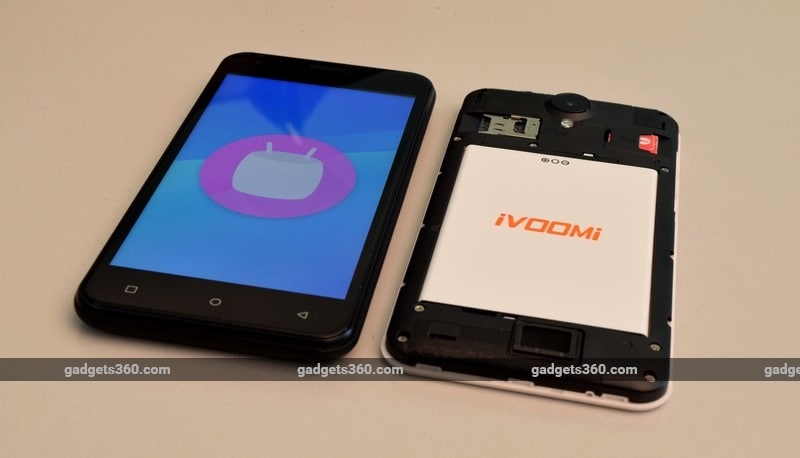 The phones are good for light use like calling and messaging, but slow down when the number of active apps goes up. More RAM gives the Me 1+ some breathing room in comparison to its less expensive sibling. Gaming isn't recommended on either of these phones as the delayed touch response degrades the experience. Secondly, most games aren't compatible with the hardware on these phones. We managed to load up Clash Royale, though it lagged so much on the Me 1 that our fun was ruined.

After you are done gaming you might have to put both these phones aside for a while as they get quite warm. Plugging them in would also be a good thing to do as the 3000mAh batteries take over three hours to charge when using the bundled 5W charger.

This is probably the most noticeable area in which the iVoomi Me 1 and Me 1+ differ. The Me 1 sports a 5-megapixel camera at the back while the Me 1 gets an 8-megapixel camera. Both phones use the exact same camera app which is pretty much a toned down version of Android's stock app. The controls are quite simple and you can choose between panorama, photo, and video modes. You also have the option of beautification, which lightens skin tones after images are taken. On both phones, we found lag in the viewfinders which made it harder to frame shots.

With the iVoomi Me 1, photos lacked detail and appeared dull. We wouldn't recommend using this phone to take landscape shots, but macro photos are somewhat better as there is at least some detail. If you need to record video, the camera is capable of going up to HD resolution. There isn't much to say in terms of low-light performance - you will need a steady hand and there is noise in the output. At the front, there's a 5-megapixel camera for selfies and the output is again dull. 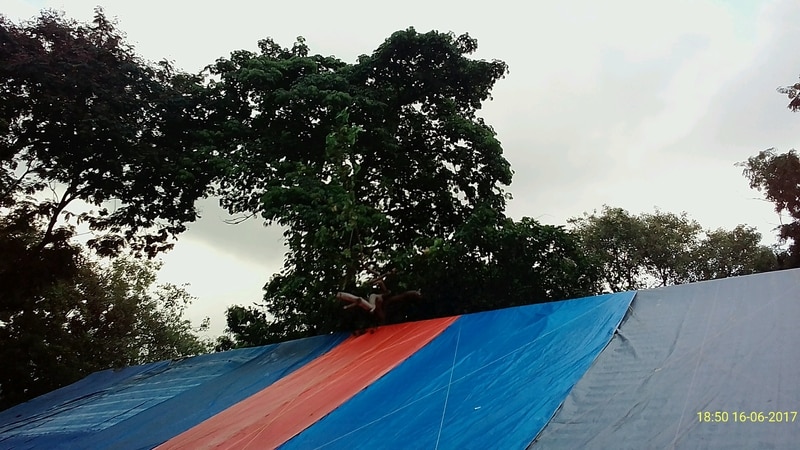 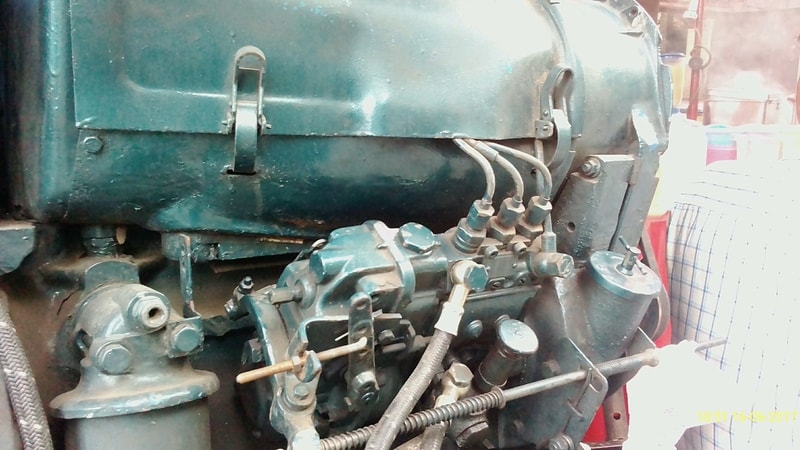 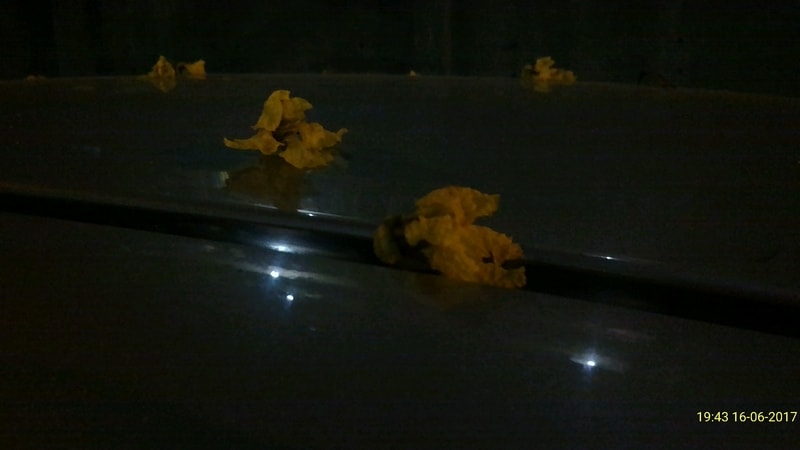 The output on the iVoomi Me 1+ isn't very different; you just a higher resolution output thanks to the 8-megapixel sensor. We noted that colour accuracy was off on this camera, and whites looked overexposed. Just like with the Me1, macro shots are better than landscapes. The selfie camera on the Me1+ is exactly the same as on the Me1, and we didn't find any difference in their output. Video recording also maxes out at 720p for the primary camera and 480p for the secondary camera. 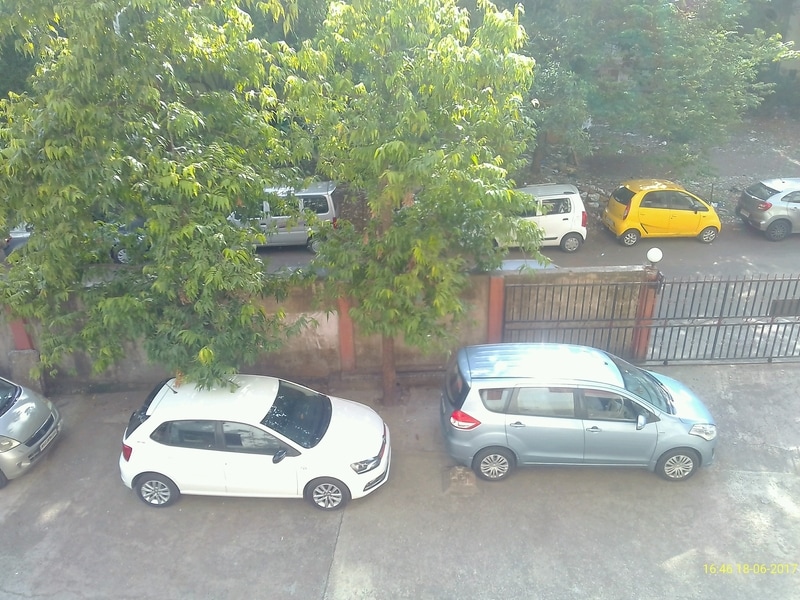 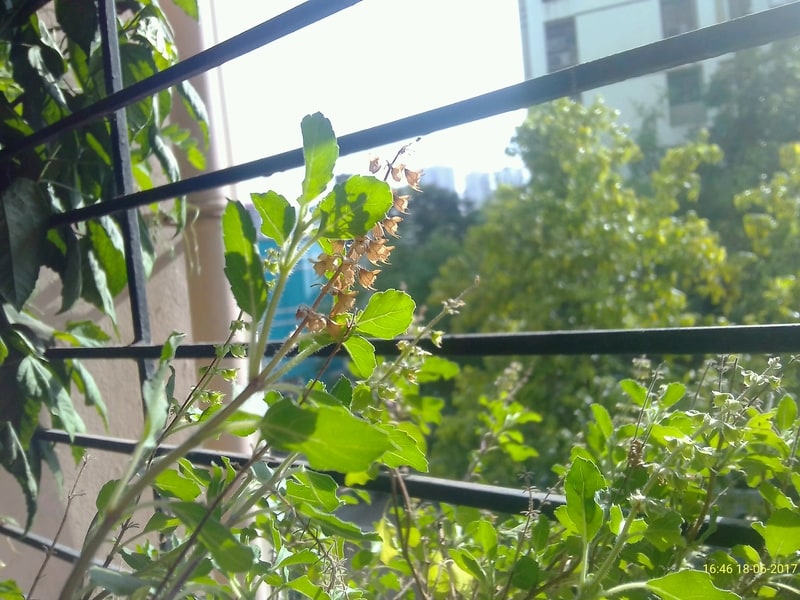 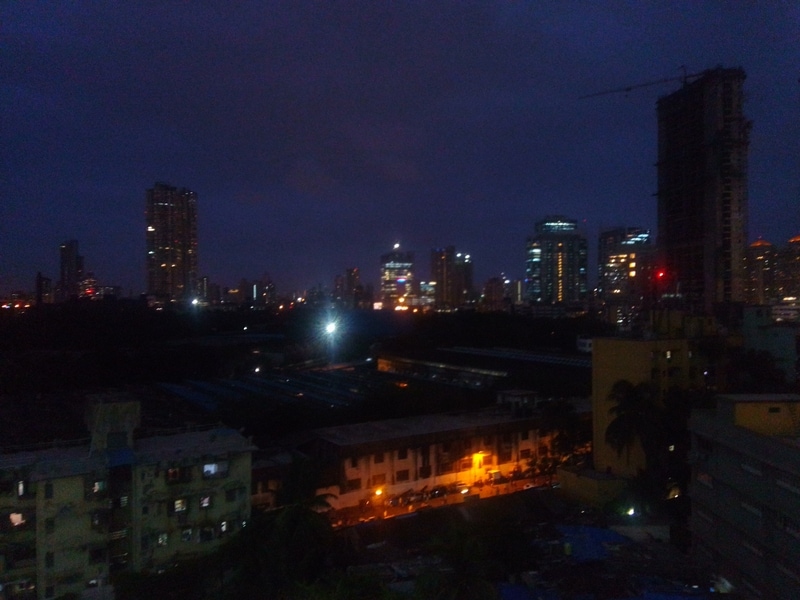 Verdict
These two iVoomi smartphones are targeted at the sub-Rs 5,000 market which a lot of manufacturers don't really bother with. Both models offer better specifications than their current competition, but there are still issues. The HD resolution seems impressive, but the screens themselves aren't responsive to touch which can be frustrating at times. The speakers aren't loud and you might miss calls with either phone lying face-up on your desk.

Both models will last you through one working day with light use, but charging them is really time consuming. Thankfully, the near-stock Android software is manageable, and the company has promised a Nougat update which will make these phones slightly better value for money. If you have a very tight budget and are willing to live with these compromises you can give either of these a try.