The iQoo 3 is the first smartphone from the Chinese smartphone maker.

The 6.44-inch AMOLED display is gorgeous to look at

iQoo is the latest smartphone brand to enter the already competitive Indian market. This new brand has been spun off from Vivo pretty much the same way that Realme was spun off from its parent company Oppo. What is interesting is the positioning of iQoo in the Indian market. While Vivo never really targeted the flagship segment, iQoo is planning to do just that. The responsibility for making a mark is resting on the iQoo 3, the brand's first smartphone to launch in India. It sports hardware that is more powerful than any Vivo smartphone currently in the market, but should you seriously consider buying it? We got to spend some time with the new iQoo 3 and here are our first impressions of the device.

The iQoo 3 wasn't a very well kept secret. Thanks to multiple leaks, we already knew what the device looked like and had a fair idea of the hardware it packed. What we now know is its price. The iQoo 3 without 5G starts at Rs. 36,990 for 8GB of RAM and 128GB of storage, and is also available with 256GB of storage for Rs. 39,990. Although a 5G modem must be paired with the Snapdragon 865 processor, iQoo has implemented these two variants without active 5G functionality.

The sole version with 5G (which might also be advertised as the iQoo 3 5G) has identical core specifications. If you choose this version, you'll also get 12GB of RAM and 256GB of storage, and it is priced at Rs. 44,990. The recently launched Realme X50 Pro 5G (First Impressions) is priced more aggressively starting at Rs. 37,999 and shares the same processor as the iQoo 3.

When we got our hands on the device we were impressed with its build quality. The iQoo 3 is well constructed and feels premium in the hand. While the design does have hints of the Vivo V17 (Review), which we reviewed some time ago, the overall finish is much better. At 214.5g, the iQoo 3 is heavy but still manageable. This could be due to the premium materials used in its construction as well as the 4,440mAh battery that it packs in.

We like the big 6.44-inch AMOLED display which has a tiny hole-punch display on the top right corner. It sports a full-HD+ resolution and has very good viewing angles. It also has different colour modes to choose from, something we will explore when we review this smartphone. We like that the borders are quite thin and nearly invisible if you set a dark wallpaper on the device. iQoo has pre-applied a screen protector on the device. 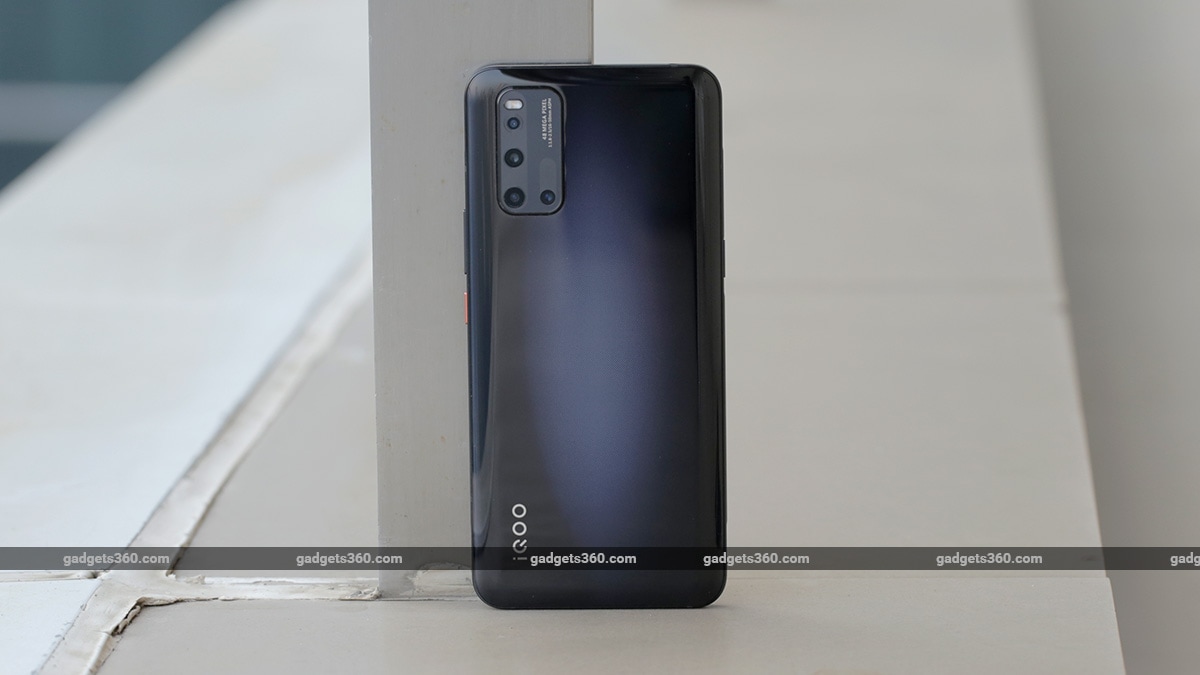 The iQoo 3 feels premium to hold

The iQoo 3 has a slightly rounded metal frame, which makes the device comfortable to use. We found the power and the volume buttons to be well positioned and easy to reach when holding the smartphone in the hand. The power button also has a texture on it which makes it easy to distinguish purely by feel. On the right side, the iQoo 3 has capacitive shoulder buttons which are easy to hit when holding the smartphone in landscape orientation, such as when gaming. The left side of the frame only has a smart button which can be used to summon the Google Assistant.

iQoo offers a 3.5mm headphone socket on the smartphone at the top, so if you still prefer using a wired headset the iQoo 3 lets you do so. At the bottom, it has the USB Type-C port, the SIM tray, and the loudspeaker.

The back panel of the phone is made out of Corning Gorilla Glass 6 and should be able to withstand the rigours of regular usage. It is slightly curved at the sides which makes it comfortable to hold. The camera module again reminds us of the Vivo V17. While there is some similarity between the two phones in terms of looks, the sensors used are completely different. The iQoo 3 packs in a quad-camera setup that consists of a 48-megapixel primary camera, a 13-megapixel telephoto camera, 13-megapixel wide-angle camera, and a 2-megapixel depth sensor. For selfies, it packs in a 16-megapixel camera. We are curious to see how all these cameras fare in our detailed review. 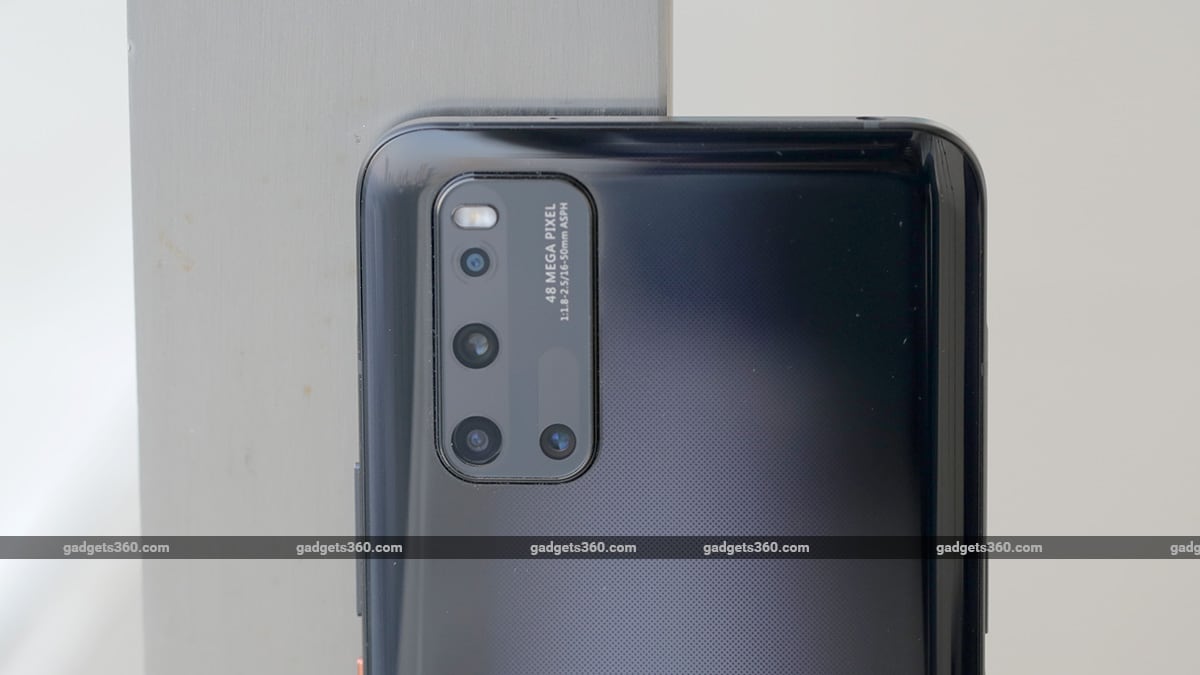 iQoo has bundled a 55W "Super FlashCharge" charger in the box, which should help charge the smartphone quickly. When we reviewed the Realme X2 Pro (Review) we saw how quickly a 50W charger was able to top it up. However, it is one of the biggest chargers we've ever seen.

The iQoo 3 is one of very few smartphones currently in the market that sport the Qualcomm Snapdragon 865 SoC. This is an octa-core SoC manufactured using a 7nm process. It has Kryo 585 cores and an Adreno 650 GPU. The smartphone also supports UFS3.1 storage, which is the latest standard, and LPDDR5 RAM. It comes in two variants, a base version with 8GB of RAM and 128GB of storage, and a higher one with 12GB of RAM and 256GB of storage. The iQoo 3 is a dual-SIM smartphone with two Nano-SIM slots.

With a powerful processor, big battery, quick charging, and a quad-camera setup, the iQoo 3 has the ingredients of a great smartphone. Has this new brand done enough to succeed and make a name for itself? Stay tuned to Gadgets 360 for the full review of the iQoo 3, coming up soon.

Further reading: iQoo, iQoo 3, iQoo 3 Price in India, iQoo 3 5G, iQoo 3 specifications
Aditya Shenoy Email Aditya Aditya Shenoy reviews smartphones, wearables, headphones and speakers for Gadgets 360, out of Mumbai. Aditya is a reviewer for Gadgets 360 and has written extensively about smartphones, software updates, and upcoming devices. Aditya is available on Twitter at @adishenoy, and you can mail him at adityashenoy@ndtv.com, so please send in your leads and tips. More
Mentalhood Trailer: Karisma Kapoor Is One of Six ‘Supermoms’ in ALTBalaji, Zee5 Series
Intel Unveils 2nd Generation Xeon Scalable Processor, 10nm 5G Chip for Wireless Base Stations

product iQoo has entered the Indian smartphone market with the iQoo 3, does it have what it takes to succeed? Here are our first impressions of the device.