Budget 4G smartphones are a dime a dozen these days and today we have yet another one to add to the list. The Intex Aqua Trend is the one of the more recent additions to the company's Android line-up and is priced just under Rs 10,000. The smartphone competes with well-regarded alternatives such as the Asus Zenfone 2 Laser (Review | Pictures) and the Lenovo K3 Note (Review | Pictures). Let's see how this domestic player fares against those from the Far East.

Look and feel
The aesthetic appeal of the Intex Aqua Trend is a bit of a mixed bag. It's not so bad from the front but the default back cover (which extends around the sides) looks and feels very cheap. Thankfully, you can save some dignity by using the bundled flip cover which has a white faux leather texture. The cover has a magnetic strip on the side for turning the display off, and also features a circular cutout in the front. Through this, you can see the time, check call and message notifications, and control the camera and music apps without having to unlock the phone. 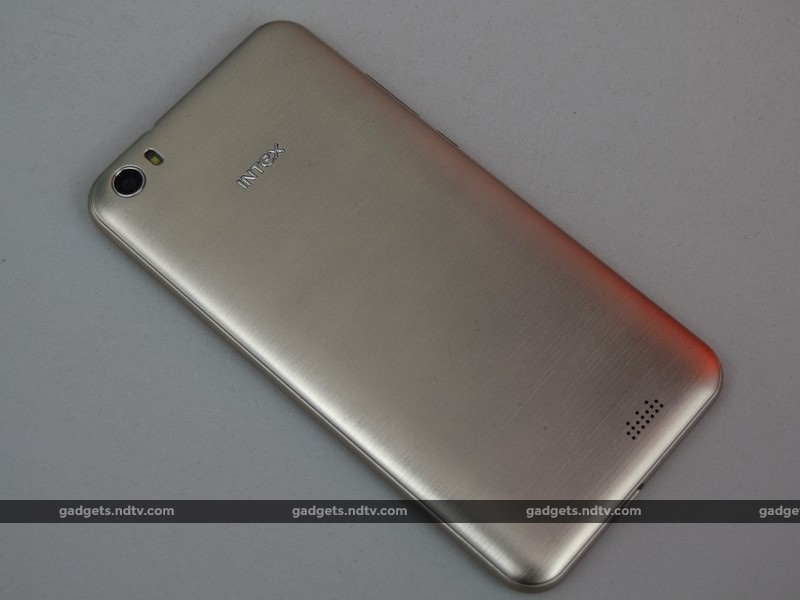 Intex gives you some of the basic sensors such as an accelerometer, proximity sensor and an ambient light sensor. The capacitive buttons for navigation are placed on the bottom but aren't backlit. A notification LED is also something that's missing. The IPS display measures 5 inches diagonally with a resolution of 720x1280 pixels. Colour reproduction is not the best, as banding is very noticeable even in wallpaper images. However, brightness levels are good and the phone is legible indoors and out. The display is also quite the fingerprint magnet and doesn't have any scratch protection, a feature usually found in other phones in this segment.

The power and volume buttons are placed on the left, which works well except for the fact that they are blocked if you use the flip cover, which makes no sense. The cover has icons indented to guide you but they can't be discerned by touch so you have to actually look at the phone each time rather than just reach for them. Things would have been a lot simpler if the buttons had been placed on the right.

Coming to the back, we have a 13-megapixel camera sensor, an LED flash unit and the speaker grille at the bottom. The headphone socket and the Micro-USB port take their usual spots on the top and bottom respectively. 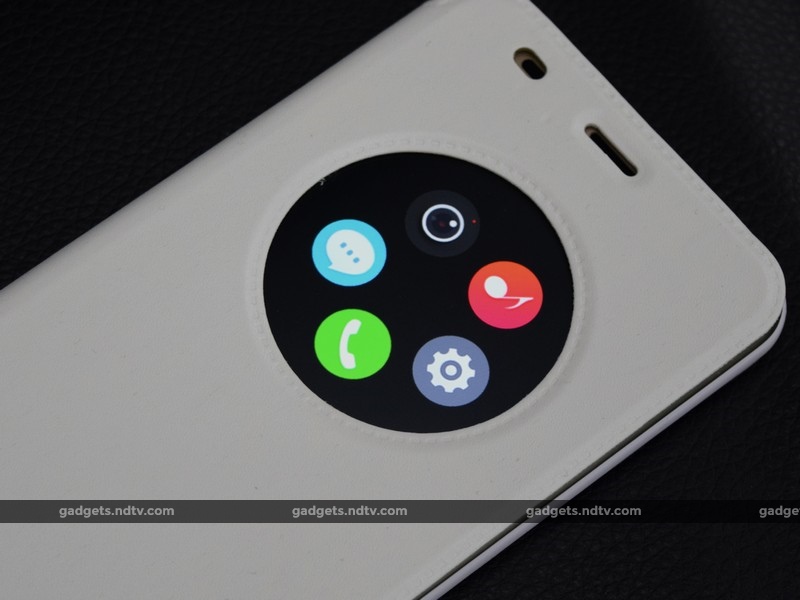 The Intex Aqua Trend is on the heftier side at 8.9 inches in thickness, and 152g in weight. That's nearly as heavy as the far more premium Samsung Galaxy S6 Edge+ (Review | Pictures). In the box, you get a charger, data cable, headset, flip cover, and a screen guard. The phone is available in black, champagne, grey, or silver.

Specifications and software
Powering the phone is a quad-core MediaTek MT6735 SoC and 2GB of RAM. The four cores in the chip can run at up to 1.3GHz. Graphics are handled by an integrated Mali-T720 GPU. The Intex Aqua Trend is a Dual-SIM phone with support for 4G on both SIM slots. It also supports Wi-Fi b/g/n, Bluetooth 4.0, GPS, FM Radio, USB OTG and Wi-Fi Direct. There's 16GB of onboard storage which can be expanded by 32GB with a microSD card.

Android 5.1 is customised on the Intex Aqua Trend, but this extends mostly to the icons and some motion gestures. MediaTek's HotKnot feature can be used to transfer files between two compatible phones by touching their displays to each other. The 'Gesture sensing' sub-menu in the settings app lets you perform actions such as browsing through your photo gallery or capturing a picture by waving a palm across the screen. 'Smart Wake' lets you open apps by simply tracing a predesignated letter when the screen is off. 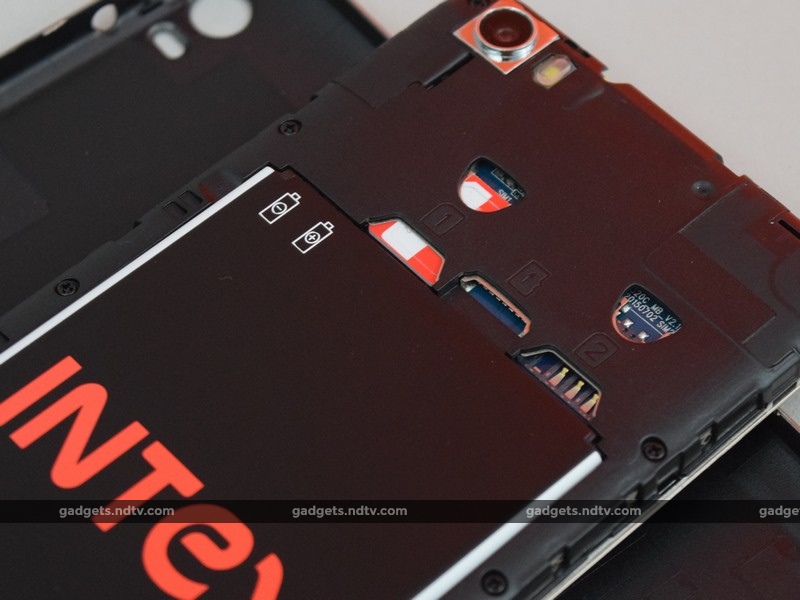 Intex preloads a host of third-party apps as well. There's AppsGallery, which is an app store; Auto Call Record; BLE Manager, a Bluetooth device manager; Intex Service, which shows you service centres near you; and Intex Play, which is a link to a storefront for mini games. You also get Chaatz, Clean Master, MX Player, Myntra, NewHunt, Opera Mini, Quickoffice, Quikr, and Skype.

Performance
The phone handles most apps and games pretty well. Demanding 3D games were a bit challenging but the Intex Aqua Trend managed to run Asphalt 8 with very little stutter. Call quality is OK at best and we didn't face any call drops during our usage. Incoming notifications are clear but the audio quality of the speaker could be better. The bundled headset is not great for listening to audio either. The earbuds don't have a good fit and the sound produced is quite poor.

The quad-core SoC handles video files fairly well. We did notice a hint of frame skipping when playing high-bitrate files and some 1080p content, even with VLC. The phone never gets uncomfortably hot during regular use, except if you're playing a taxing game. The Intex Aqua Trend scored 26,364 points in AnTuTu and 5,520 in 3DMark Ice Storm. These aren't great numbers but are similar to what you'd get from other handsets with the same hardware. 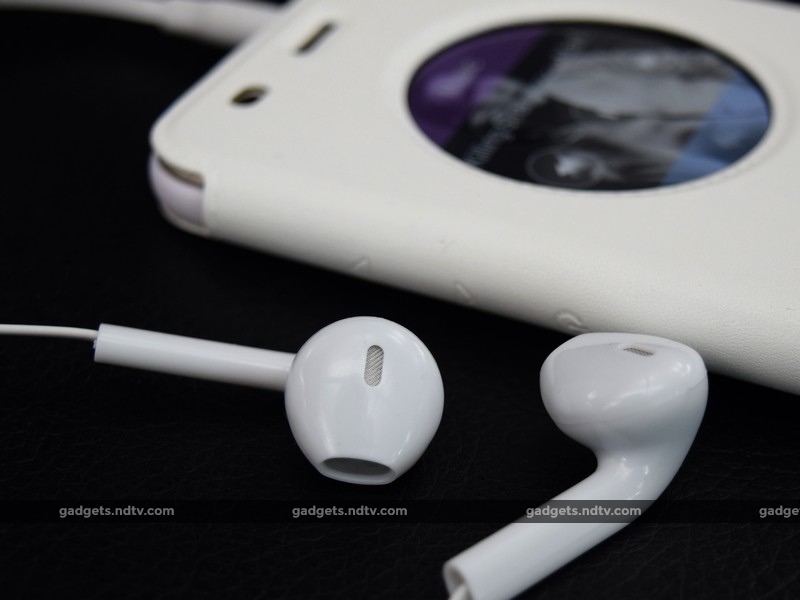 The 13-megapixel camera captures decent landscapes and macro shots, given good lighting. Autofocus is fairly quick too but gets painfully slow in low-light conditions. The camera app is very basic and you get only the typical scene modes, filters and a few adjustment options. Picture quality is strictly average from both the rear and front-facing cameras. Video recording maxes out at 1080p for the rear camera and 480p for the front. 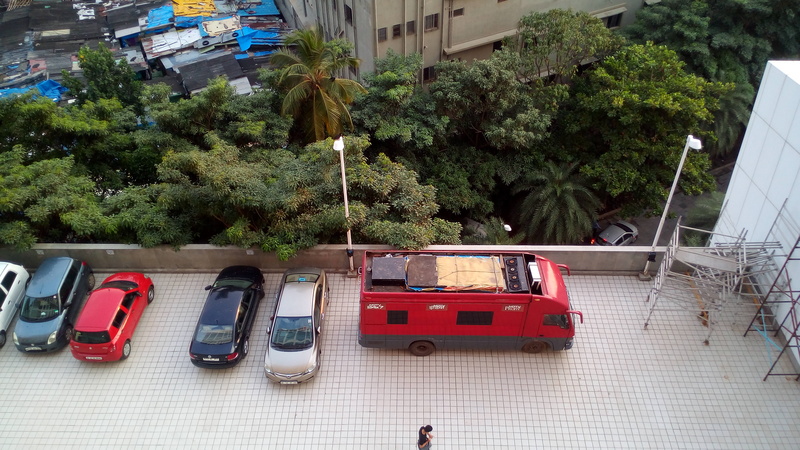 We expected the Intex Aqua Trend to make up for all its shortcomings in the battery department, but sadly, it didn't happen. The 3000mAh battery lasted just 9 hours and 11 minutes in our video loop test, which is below average. You should be able to squeeze out just about a day's worth of usage in regular conditions.

Verdict
The Intex Aqua Trend doesn't break any new ground and is quite a forgettable smartphone. At a street price of Rs 9,700, it's also quite expensive considering the whole package. One can easily find better looking and more feature-packed smartphones in this price range, such as the Asus Zenfone 2 Laser and even the Lenovo K3 Note.

The phone has many flaws such as an underwhelming display, average camera and battery performance, and the fact that it's quite heavy and bulky. Some of the positive aspects of the phone are that it supports LTE on both SIM slots and that the bundled flip cover helps in disguising its otherwise tacky design. Overall, we feel you should give this one a miss.