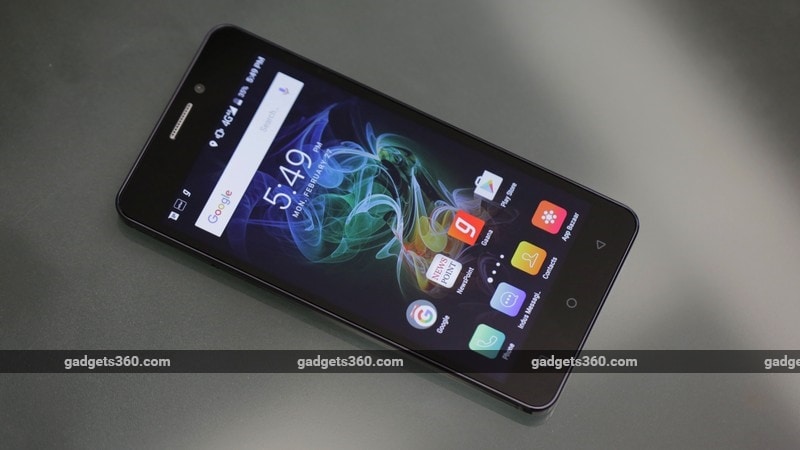 Domestic operating system developer Indus OS has managed to tie up with major Indian smartphone companies over the past year or so. Its key strength is the Indus keyboard, which lets users translate and transliterate local languages; a very useful feature for those more comfortable conversing in their native language than English.

In the past we’ve seen this in action on the Micromax Unite 4 Pro (Review), and now, Intex has launched a new smartphone with the same features. The Aqua Supreme+ is a budget phone, priced just under Rs.10,000. It’s time to find out how well it competes with the powerful Xiaomi Redmi Note 4 (Review) and the Samsung On7 Pro in this price segment.

Intex Aqua Supreme+ design and build quality
Available in black and champagne, the Aqua Supreme+ doesn’t have the most attractive design. Our black review unit looked like any entry-level Android. It's a pain to keep cleaning fingerprints off the body, but surprisingly, the display doesn’t pick up smudges very easily. Despite its plastic body, this phone feels well-built and there aren’t any creaking parts or sharp edges. It’s also very light at 133 grams.

The 5-inch IPS display has a HD resolution, which is manageable for a screen this size. Sunlight legibility could have been better, and we found touch response to be sub-par. Colour reproduction is also strictly average, with exaggerated reds and muted tones. You get non-backlit navigation buttons below the display, and the camera and sensors above it. The headphones socket and Micro-USB port are both placed on the top, while the dual-SIM tray is on the left. The phone can accommodate a microSD card of up to 128GB.

Around the back, the camera and LED flash sit flush with the rest of the body. The Aqua Supreme+ doesn’t have a fingerprint sensor. In the box, you get a 7.5W charger, data cable, in-ear headset, screen guard, SIM ejector tool, and instruction manuals.

Intex Aqua Supreme+ specifications
Powering the phone is a quad-core MediaTek MT6737 SoC, with 2GB of RAM and 16GB of storage. The specifications are just about enough to run Android Marshmallow well, but the overall experience isn’t as smooth as we would have liked. There is a slight but noticeable lag throughout the OS, when swiping between home screens and when switching between apps. Thankfully, it’s not as terrible as the experiences we've had with extremely low-priced Android phones with Marshmallow.

As expected, benchmark numbers aren’t too favourable. AnTuTu returned a score of just 29,806 while we got only 10fps in the GFXbench T-Rex test. Basemark Web 3.0 wasn't able to calculate a score since it couldn't finish running. Other specifications include Wi-Fi b/g/n, Bluetooth 4.0, FM radio and GPS. USB OTG isn’t supported here.

Indus OS 2.0 doesn’t tamper too much with Android Marshmallow’s design. Apart from a custom launcher and icons, the rest is taken from stock Android. The SMS app has been replaced with the Indus Messaging app, and thanks to a recent tieup with FreeCharge, you should be able to top up your account right from the dialler app if you have a prepaid SIM card. The Indus Settings app lets you change your native language at any time, along with the language of the entire UI.

Using the Indus Keyboard, you can translate or transliterate from English to your native language, which works in most chat apps like WhatsApp. In other situations such as in the browser, you can switch between typing in the system language and your native one. You can even perform text-to-speech in English or your native language provided you’re able to select the text and copy it to the clipboard.

In the Android Settings app, we have added features like Turbo Download, which uses Wi-Fi and your cellular data simultaneously to download files quicker. You can’t force this feature though; it depends on the speed of your Wi-Fi connection and the file size (which should be above 20MB). There’s an SOS feature which sends out a distress message with your location to specific contacts that you select. Last but not least, we also have some on-screen gestures for access to system apps.

Other than the slightly sluggish performance of the OS, another annoyance is the sheer number of apps that are preinstalled. While you can uninstall most, there are some that cannot be removed, which is a shame if you have no use for them.

Intex Aqua Supreme+ performance
The translation features require you to be online, but you can use transliteration offline. You simply swipe right or left on the text field for the desired action, which works decently well. The capacitive navigation keys aren't very sensitive, and we found ourselves having to tap them multiple times to register our input. The internal storage filled up quickly during our test period, and if you load the phone with lots of apps, you’ll need to invest in a microSD card for your media.

4G works well and the weight of the phone makes it comfortable to live with for day to day use. The Aqua Supreme+ doesn’t overheat too much, although we noticed that the back gets warm after about 15-20 minutes of gaming. Speaking of which, demanding games like Asphalt do work, but you’ll have to drop the quality settings for smooth enough framerates.

You can get some usable landscape shots from the rear camera, but we only realised this once we saw the pictures on a large screen, as the phone’s display isn’t able to do any justice to them. The level of detail is decent, although the same cannot be said for closeup shots, which often lack sharpness. Low-light pictures aren’t too noisy but details are soft and light metering goes for a toss. Focusing is quick enough, and the speed doesn’t dip as much as we expected it to in low light.

The camera app has integrated shortcuts for Vistoso, a photo editing app, and Fashin, which lets you take pictures of products and then find similar ones on popular e-commerce sites. The latter feature is actually pretty cool and worked well for us.

Video recording maxes out at 720p, and the quality is strictly average under good lighting and barely usable at night. The front 5-megapixel sensor does a poor job when it comes to selfies, no matter the lighting conditions.

The phone's 3000mAh battery seems large enough, but we only managed to get 8 hours and 33 minutes in our HD video loop test, which is just about average. With regular usage, we weren’t able to get through even one full day on a single charge.

Verdict
At Rs. 9,490, the Intex Aqua Supreme+ is the priciest of the trio that Intex launched recently, all running Indus OS. However, it only makes going for this phone if you’ll be using the native language features a lot, because you can do a lot better for this kind of money when it comes to every other feature. Xiaomi’s Redmi Note 4 and even Samsung’s On7 Pro should serve you better at this price range.