Even two or three short years ago, there was a clear line between what a cheap phone could and couldn't do. They used to be anaemic and underpowered, with awful dull displays. They were saddled with touchscreens that were dull, grainy, slow to respond, and especially painful to type on. You couldn't watch movies or play games, and you certainly couldn't carry a library's worth of entertainment around with you.

That changed simply because of the number of smartphone manufacturers we now have competing with each other. Whenever any of them introduces a model with a fancy new feature, the rest rush to match or outdo it. We now expect to see metal bodies, high-resolution screens, fingerprint readers, fast processors, and loads of storage even well below the Rs. 10,000 mark. More importantly, we expect that these phones will be smooth and easy to use. The dream of democratisation has in many ways come true.

That's why a phone like the Intex Aqua Crystal comes as such a disappointment. Its specifications and features make it seem like it might be worthy of comparison with heavy hitters such as the Xiaomi Redmi 3S, but real-world usage is a whole different matter. Read on to see what we mean. 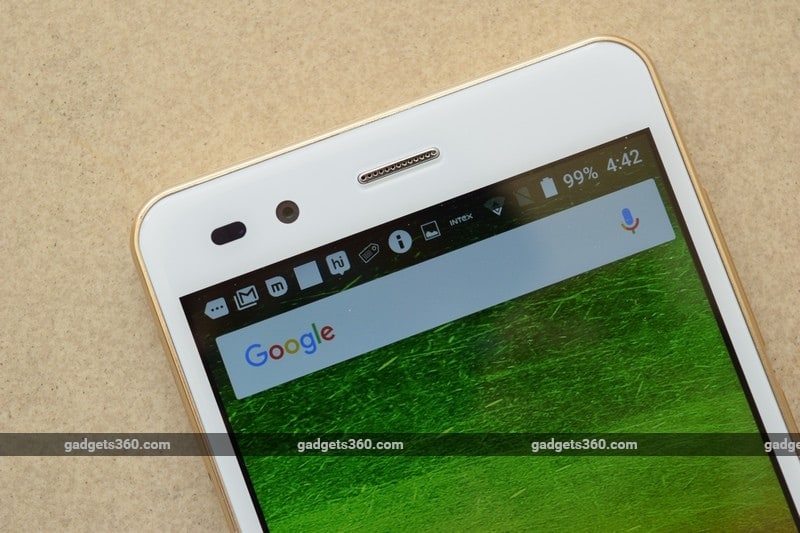 Rounded edges and corners are all the rage now, but Intex has kept things old school with the Aqua Crystal. The front and rear are completely flat, and there's a band running around the sides. You have a choice of black or white, and our white review unit had a gold rim and accents. The capacitive button icons below the screen and the Intex logo and regulatory text on the back are all printed in gold, and they catch the light when you move the phone around. The overall look of the Intex Aqua Crystal isn't bad at all, but we think more people will prefer the plainer black version.

The front and back are glass, and this phone slides around way too easily on any flat surface. Grip isn't too bad because this phone is relatively small and also light at 139g. The power and volume buttons are within easy reach on the right, and there's only a hybrid dual-SIM tray on the left. You'll find a 3.5mm audio socket on the top and a Micro-USB port on the bottom. There are symmetrical grilles flanking the port, but only one is actually a speaker.

One-handed use is fairly easy with the Intex Aqua Crystal. The plastic rim got scuffed and dented within a few days of casual usage. Intex gives buyers an adhesive screen protector and a hard plastic shell in the box. There is some flex to the body and when you look at the edges really closely, the seams between the glass and plastic parts appear a bit rough. The unit is sealed so there's no access to the battery. 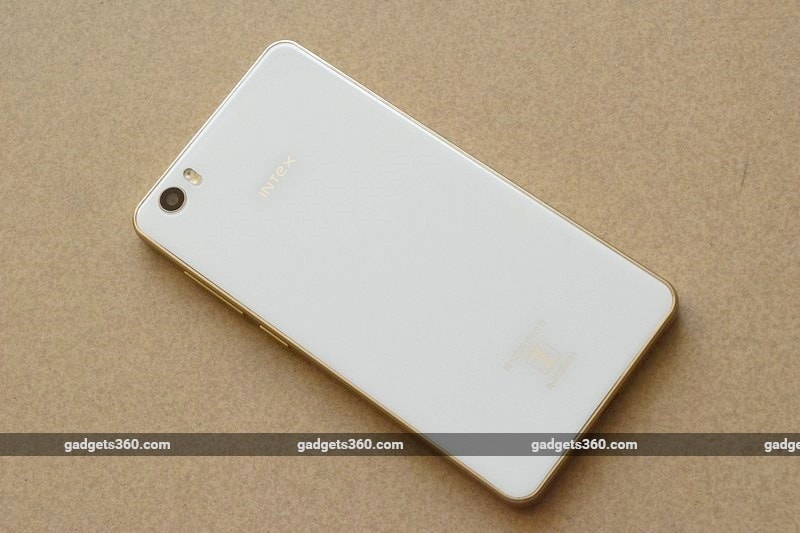 The MediaTek MT6737 SoC is a popular choice for low-cost smartphones, with four ARM Cortex-A53 CPU cores running at up to 1.3GHz, and integrated Mali-T720 MP2 graphics. We've encountered this chip in several phones that cost around as much or even higher, such as the Coolpad Mega 3 and Asus ZenFone 3 Max. However, there's only 1GB of RAM and 8GB of storage which are both half of what we'd now consider normal for this price level.

The screen is a 5-inch HD panel, which is not too bad. You get 4G and VoLTE support, but the hybrid dual-SIM slot stings more than usual because of the extremely limited amount of internal storage. The battery is rated at 2100mAh which is far weaker than what all the aforementioned competitors offer.

You get an 8-megapixel rear camera with a dual-LED flash, and a 5-megapixel front camera. Video is recorded at 640x480 (VGA) by default and the maximum resolution is 1280x720. The only sensors you get are for ambient light, proximity and gravity (for screen rotation). 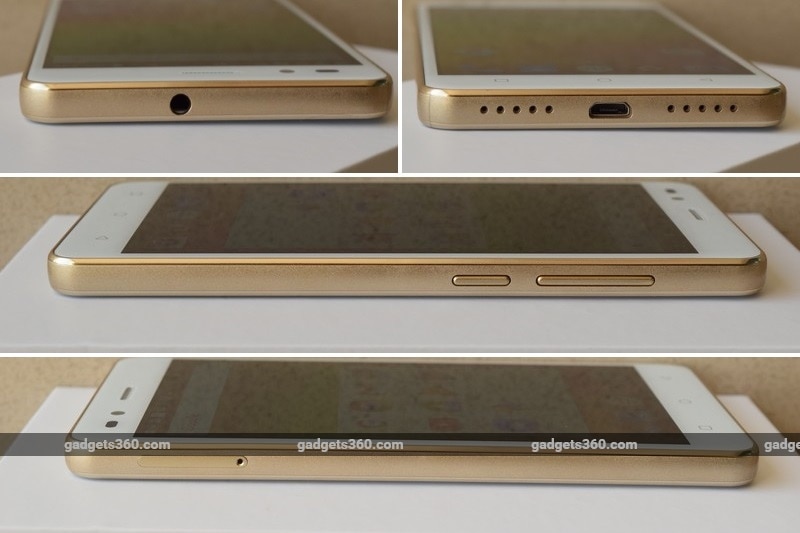 Unsurprisingly, this phone runs Android 6.0. Unlike its sibling, the Aqua Supreme+ which runs Indus OS, this UI has the feel of stock Android, but there's a lot of customisation and bloatware. This is where things really start going downhill for the Intex Aqua Crystal - somewhere in the implementation and optimisation of hardware with software, things have gone horribly wrong.

The first time we switched this phone on and ran through the Android setup process, we could tell that the touchscreen wasn't very accurate. Swipes and taps often didn't register correctly, and typing was problematic. The moment we reached the home screen, without having done anything at all, we saw an error message about an app crashing, plus spam notifications already waiting for us.

With continued usage, we began to feel that the Intex Aqua Crystal has taken us backwards in time - the SoC should be good enough to handle the basic Android interface, but even a simple swipe to unlock the phone sometimes didn't register. Taps and swipes were consistently inaccurate and sluggish. Typing was sometimes slow and difficult.

Swiping to the left of the first home screen brings up a kind of media feed called Lfty. It's full of ads for TV shows, movies, and apps. There's a series of links to drive Gaana and Saavn subscriptions, a "Masti Club" for celebrity gossip which costs Rs. 99 per month, and online games which cost Rs. 35 per week. There's "news" in the form of headlines delivered by an app called News Point. The whole thing is sluggish and painful, and looks like it's designed to bombard users with ads rather than deliver actual value. The only options we found were for a preferred language and the ability to choose from a group of sponsored sources for the news section. Buried in the phone's home screen preferences, we found an option to turn off the Lfty screen altogether, which was a huge relief.

The phone is also unsurprisingly full of bloatware. There are three browsers for no good reason, an app store called 9apps and another called Game Store, the aforementioned News Point plus another news app called Dailyhunt, two spam video apps called Chillx and Vdioplay (the latter of which got stuck at its loading screen), a redundant photo manager called Cool Gallery, and a system management tool called MiFon. Other third party apps include Amazon, Gaana, Oxigen Wallet, Fashin, Vistoso, UC Mini, Hike, and a 180-second (yes, 180-second) free trial of a game called NOVA 3.

The majority of these apps wanted permissions to send and read SMS messages, make phone calls, access contacts, change system settings and monitor GPS location. MiFon even wanted special admininstrator privileges. Several of them bombarded us with spam notifications. We found that many of the apps couldn't be uninstalled, which was all the more galling considering the piddly 8GB of storage that this phone has to begin with.

In the Settings app, you'll find two further customisations - wakeup gestures, which launch directly into an app of your choosing, and emergency rescue, which sends a predefined message with your location to your chosen contacts when you hold down the volume up and down keys together for three seconds. This is in addition to the now-standard SOS shortcut of pressing the power button thrice in quick succession. 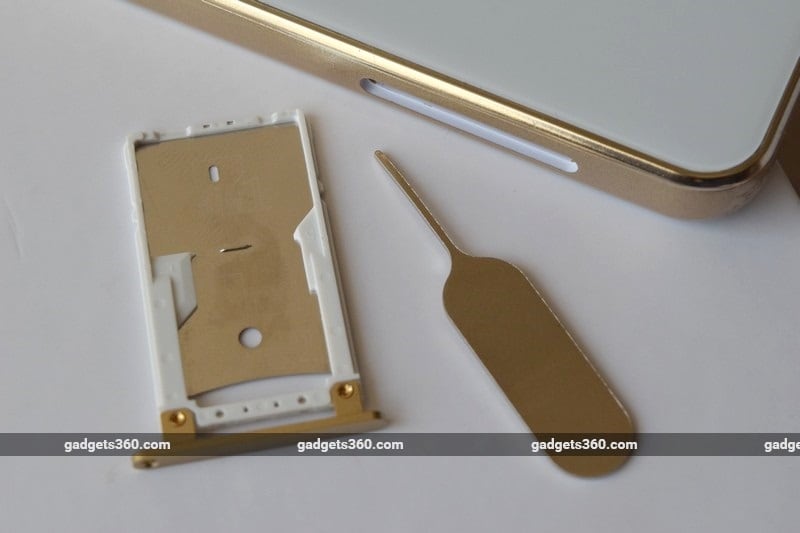 The Intex Aqua Crystal was disappointing in terms of performance. Apps took a long time to load and simple tasks such as bringing up photo thumbnails were noticeably delayed. In addition to its software and usability problems, this phone got hot pretty easily while performing fairly mundane tasks. We had trouble swapping apps around because of the extremely limited amount of storage. Strangely, most video files just didn't play. Only our most basic SD AVI test file was able to run even in multiple apps, and even that froze after about 15 minutes. MP3 audio files played fine in VLC, but not FLAC.

At leats YouTube videos seemed to play okay in the app. We were able to install and run Asphalt 8 on the Intex Aqua Crystal but actual gameplay was too slow for us to even be able to control our car. Formal benchmark scores were also quite poor - we got 28,148 in AnTuTu, 1,517 in GeekBench's multi-core test, 8,950 overall in Quadrant, 2,339 in 3DMark Ice Storm Extreme, and only 10fps in GFXBench.

Because of these video-related problems, we were not able to run our standard video loop battery test. With average everyday usage not including games and videos, we were able to get through most of a day but had to grab the charger by evening. The Intex Aqua Crystal also took a long time to charge.

The biggest positive about the Aqua Crystal in terms of performance seems to be its screen. The 720x1280 resolution isn't too low for its size, visibility is decent colours are quite punchy without being oversaturated, and text is crisp. Viewing angles are good enough too. It would have been nice if the phone's speaker was as good, but we found it to be too soft and muffled.

That brings us to the phone's cameras. The camera app is fairly cluttered, with loads of icons around the edges. Some of them are useful, but others are simply shortcuts to bundled apps that we don't want anyway. Fashin claims to let you take photos of people's clothes or and find them (or similar styles) on online shops. It seemed to pick up colour combinations from the shots we tried, but not patterns or styles. It might be more useful for comparing prices across stores. Vistoso is an image filter tool, apparently powered by machine learning, which gives you artistic transformations and sharing tools as well as integration with Vistaprint so you can order mugs, bags and clothes with your images. We tried previewing some options but the app didn't show how our images would really look on curved and cloth surfaces.

As for the camera itself, we found that quality was just about decent. Images were washed out, dull, and lacking in sharpness. Some details came out nicely in closeups, but you really shouldn't expect too much. Night shots were noisy and results were heavily dependent on the type and amount of light available. Some had a decent amount of detail, while others were completely dark. 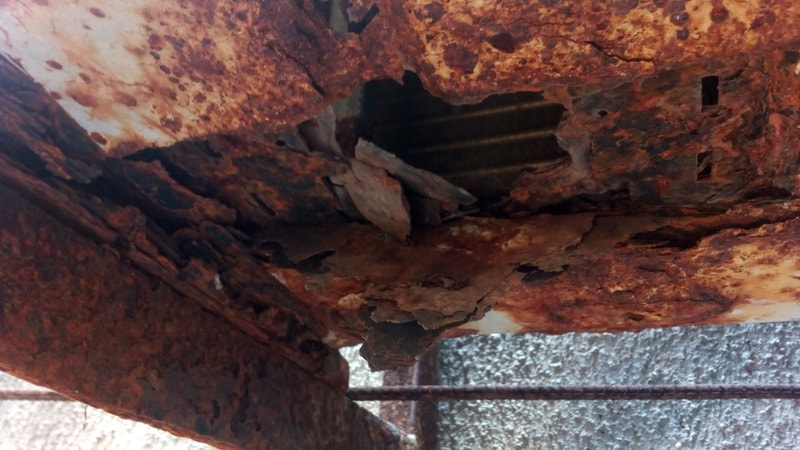 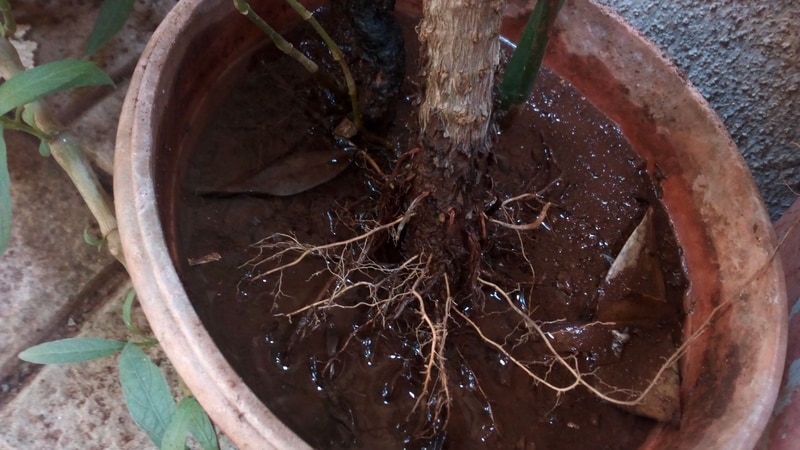 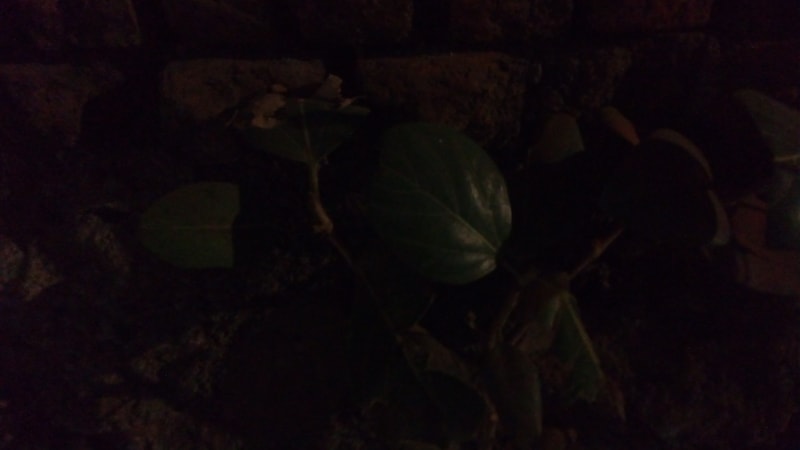 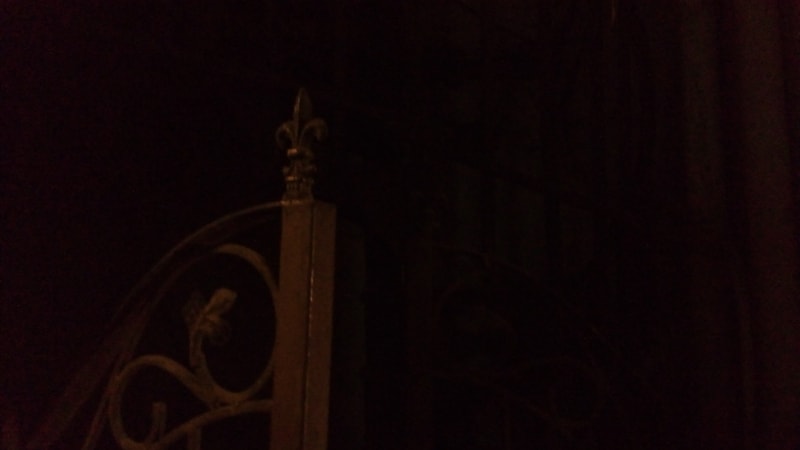 Verdict
The Intex Aqua Crystal could have gotten away with its lacklustre performance a few years ago, but there's very little excuse for delivering such a shoddy experience now. Intex has clearly improved when it comes to design, and this phone could look attractive next to a similarly priced Xiaomi, Lenovo or Coolpad model. However, pretty much everything else about the Intex Aqua Crystal is a disappointment.

The SoC should have been powerful enough, but the touchscreen is simply awful. Without enough RAM and storage, and with such poorly optimised software, there's nothing pleasant about using this phone. The amount of intrusive bloatware also feels like adding insult to injury. Buying it means losing out on the promise of all that a smartphone can and should be able to do. We cannot find a single reason to recommend it, and you can do way better with a budget of Rs. 7,000.