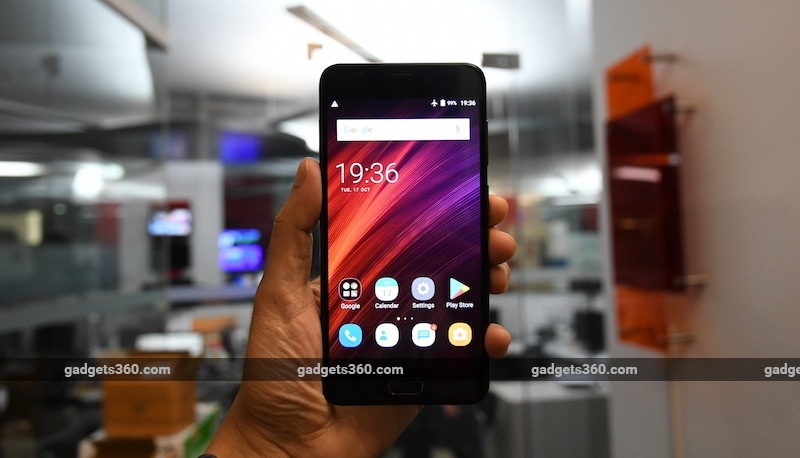 Dual cameras are currently a hot trend that nearly all smartphone manufacturers are pushing, and buyers are looking for exactly this kind of differentiator for their next upgrade. InFocus is hoping to attract some of them with its two recently launched models, of which we have the Turbo 5 Plus with us for review.

This new entrant is a slight refresh of the Turbo 5 (Review) with a faster processor, more RAM and storage, and a second camera at the back for depth effects. Priced a couple of thousand rupees higher at around Rs. 9,000, the Turbo 5 Plus goes up against the likes of the Xiaomi Redmi 4, Yu Yureka Black, and Lenovo K6 Power. Its predecessor wasn’t particularly great at general performance and photo quality, so let’s see if InFocus has improved these aspects with the newer model.

The Turbo 5 Plus gets a slightly classier design compared to its older sibling, which makes it look fairly modern. The 2.5D glass feels nice against your fingers and this also eliminates any sharp edges along the sides. The rounded corners make it easy to pocket too. This is a fairly thick phone at 8.9mm but doesn’t feel too heavy as its 176g is distributed well across the chassis. The backplate is made of metal (other than a small portion at the bottom, which is plastic) and has slight curves along the edges. The design and placement of the dual camera module makes the back of this phone resemble the OnePlus 5 quite a bit.

Button placement is ergonomic. The SIM tray sits on the left and can accommodate two Nano-SIM cards or a microSD card (up to 32GB) in the second slot. With 4G active on the primary SIM, the second SIM can handle up to 3G data speeds. VoLTE is also supported. You get a 3.5mm headphone socket and a Micro-USB port on the top and bottom respectively.

The Turbo 5 Plus has a physical home button which also houses the fingerprint scanner. This scanner isn't the most accurate at authentication, as we encoutered a few misreads during our usage. Even when it does work, the screen doesn't wake very quickly. You get on-screen buttons for navigation, which can be hidden when not needed. InFocus has added a long-touch shortcut on the physical Home button that activates the flashlight.

We’re not too happy with the HD resolution on a 5.5-inch screen because of its relatively low density, but that comes with the territory in the budget space. The good news is that the IPS panel produces vivid colours, and viewing angles are decent. Sunlight legibility isn’t too shabby either. There is slight jaggedness around text and icons in some apps and system menus. There’s a notification LED above the screen for incoming alerts.

In the box, you get a screen guard, a SIM ejector tool, a USB cable, and the power adapter. There are no headphones, most likely because of the tight budget. In fact, InFocus hasn’t even bothered removing the branding of the OEM that makes the power adapter.

InFocus Turbo 5 Plus specifications and features

In this price segment, you can typically expect Qualcomm’s Snapdragon 400 series SoCs or something from MediaTek, and with the Turbo 5 Plus, InFocus has gone with the latter. We have the MT6750 octa-core SoC, as well as 3GB of RAM and 32GB of storage. Benchmark performance is pretty average, with AnTuTu returning a score of 39,780 and GFXbench giving us 22fps in the T-Rex test. However, benchmark numbers aside, real-world performance isn’t great and even the UI feels a bit sluggish

Other specifications include Wi-Fi b/g/n, Bluetooth 4, GPS, USB-OTG, and FM radio. Sensors are also limited, and you get only the basic light and proximity sensors and an accelerometer.

InFocus uses a custom skin called Smile UX on top of Android 7. It looks like stock Android for the most part except for the custom icon set and few additions to the Settings app. The icons for the pre-loaded apps look a bit like what Samsung uses in its Galaxy smartphones.

There aren’t many pre-installed apps other than Amazon’s shopping and video apps and Xploree keyboard. The DuraSpeed feature lets you select which apps should run in the background and which shouldn’t. Google Assistant is called up with a long press of the physical and onscreen home buttons.

The Turbo 5 Plus has about 1.2GB of free RAM on average, which is plenty for a phone with near-stock Android. Sadly, the interface just doesn’t feel very smooth even when just browsing through your homescreens or switching between apps. The phone handles games well but there was intermittent lag in some of the heavier titles like Galaxy On Fire 3. Playing such games for even a short time heats up the phone quite a bit. Call quality is good and the speaker is loud enough for voice calls.

InFocus provides its own apps for video and audio playback, but they don't have any specific purpose. The music app, especially, feels like it was lifted from Android Lollipop. There are Google’s multimedia apps as well, which are more polished. The phone handles most popular video and audio formats well, although video playback is limited to 1080p.

The big highlight of the Turbo 5 Plus is the dual camera setup at the back, which makes it one of the few smartphones in this segment with this feature. There’s a main 13-megapixel sensor along with a secondary 5-megapixel sensor for depth calculation and wide-angle shots. Tapping the Background Blur shooting mode button in the camera app gives you a slider to adjust the amount of bokeh. You also get onscreen animation that simulates the size the of aperture as you move the slider between its L1 and L4 settings. However, you can’t see a preview of the effect in the viewfinder so you’ll have to shoot and hope for the best. Unfortunately, there's also no way to adjust the level of blur after taking shots. The effect is very poorly executed with portions of our subjects' faces also blurred out, and areas in the background, which should be blurred, clearly visible.

Besides sensing depth, you can also use the second 5-megapixel sensor for shooting slightly wider angle shots. This is similar to the functionality that Panasonic offers in its Eluga Ray 500, for around the same price. We wouldn’t recommend using the secondary sensor as it has a fixed focus, and the image quality is pretty mediocre. The rest of the features in the app are the standard fare that we’ve seen on most MediaTek-powered phones. There's a panorama mode, filters, and HDR.

Autofocus is quite slow in daylight and even more sluggish in low light. You can get decent details in daylight landscapes shots provided you and your subject don't move around. HDR mode is present but you need to engage it manually. Pictures exhibit lots of chromatic aberration when shooting against the light, and we couldn’t find any way to turn off the app's focus lock and shutter button sounds, which are annoyingly loud.

We struggled to get any usable shots in low light. The phone also has trouble with macros, even in good lighting. Video recording tops out at 1080p but once again, quality is strictly average. There’s an option for EIS (electronic stabilisation) which does an okay job at fixing minor shakes. The front 5-megapixel camera isn't great for selfies, with mushy details and poor light metering. Video recording here maxes out at 480p.

The Turbo 5 Plus uses a 4850mAh battery, which did really well in our HD video loop test. We got a runtime of 14 hours and 57 minutes, which is impressive. However, during actual usage, we just about managed a full day’s worth of usage or even less with lots of gaming. It took us around four hours to charge the battery completely.

InFocus Turbo 5 Plus in pictures

The InFocus Turbo 5 Plus offers improved specifications over the Turbo 5, but it still fails to fix some of that model's glaring problems such as camera performance. Adding a second camera hasn’t really helped much, as the bokeh effects are poorly executed and even taking regular shots can be a struggle thanks to the slow focusing and sub-par low-light performance. The phone's interface is also a bit sluggish, and doing any intensive tasks heats it up pretty quickly.

Battery life is probably the only redeeming quality of this phone, but that’s still not enough to justify buying it. If dual cameras are what you’re after then you could look at the Panasonic Eluga Ray 500, which we found to be pretty decent in the short time we spent with it.  Then, there's the slightly older Coolpad Cool 1 Dual. If you simply want a solid, reliable performer without dual cameras, then there’s always the Xiaomi Redmi 4, Yu Yureka Black, and Lenovo K6 Power.