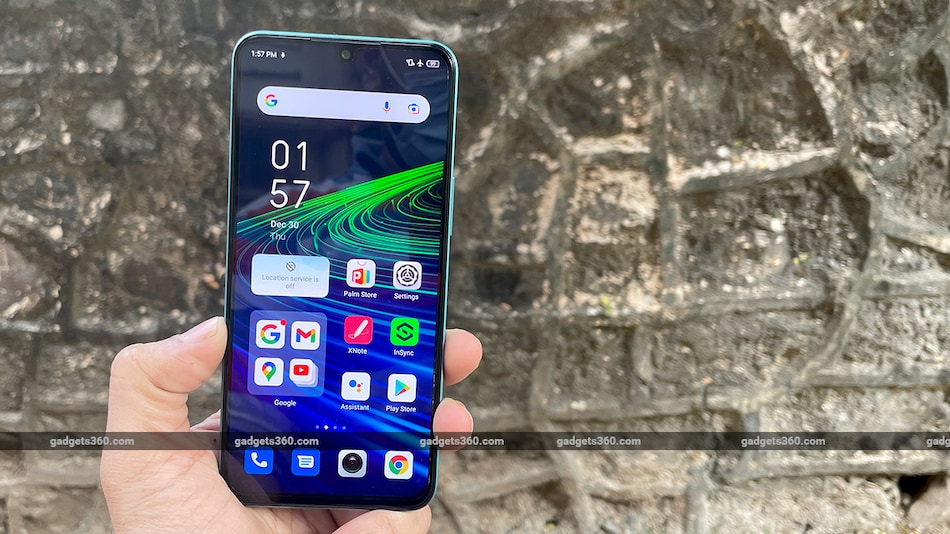 The Infinix Note 11 runs XOS on top of Android 11

Infinix has launched its Note 11 series in India comprised of two smartphones, the Note 11 and Note 11S. These two models cater to the sub-Rs. 15,000 segment and boast of capable hardware. In this review I'll be focusing on the Infinix Note 11, which is the more affordable model of the two. The Infinix Note 11 sports a 6.7-inch AMOLED display, a MediaTek Helio G88 SoC, and a 5,000mAh battery, but does it offer the best value for those on a budget? I put this phone to the test to find out.

The Infinix Note 11 is priced at Rs. 11,999 in India and is only available with 4GB of RAM and 64GB of storage. It is available in three colour options: Celestial Snow, Glacier Green, and Graphite Black.

The Infinix Note 11 has a plastic body and frame

It looks like the Infinix Note 11 was designed using just a ruler, judging by its straight lines. However, this does help it stand out compared to other chunky smartphones in the budget segment. The corners are curved, so they don't dig into your palm when holding the Note 11. The front is dominated by the big display, which has a dewdrop notch for the selfie camera. It has thin borders at the top and the sides while the chin is thicker.

The plastic frame is flat on all sides. The power and volume buttons are on the right, while the left only has the SIM tray. The top of the frame is blank while the bottom has the 3.5mm headphone jack, USB Type-C port, primary microphone, and speaker.

Just like the frame, the back panel is also made out of plastic. It has a matte finish which resists picking up fingerprints. The camera module houses three sensors, with the primary camera designed to look much bigger than the others. I had a Glacier Green unit for this review.

The Infinix Note 11 measures 7.90mm in thickness and weighs 184.5g. It was comfortable to hold and use. Infinix includes a clear case in the box, along with a 33W fast charger.

The Infinix Note 11 sports a 6.7-inch AMOLED display with full-HD+ resolution and 20:9 aspect ratio, so it is tall and narrow. There is Corning Gorilla Glass 3 for protection. The Infinix Note 11 is powered by the Mediatek Helio G88 processor, paired with 4GB of RAM. The phone sports 64GB of eMCP storage which is expandable thanks to the dedicated microSD card slot.

The Infinix Note 11 has support for Bluetooth 5, dual-band Wi-Fi, and GPS. It also has stereo speakers. It runs Android 11 with XOS 10 on top. There are customisations to the UI and you get a number of apps preinstalled on the device. I found a few of the stock apps to be spammy, pushing notifications throughout the day. I would recommend uninstalling apps that you won't use to free up some space on this smartphone, and turning off notifications for the spammy ones. Swiping right from the home screen takes you to Infinix's Zero Screen which shows recently used apps and a feed of the latest news.

The Infinix Note 11 has dual speakers

You also get features such as XClone, which lets you run two instances of supported apps, and a game mode. Infinix has developed multiple features for social media apps, which it calls Social Turbo. The ‘WhatsApp mode' only lets the messaging app access data while others are blocked. A voice changer feature to change your voice while on a video or audio call is also available. If you want to see messages that others have deleted after sending, or read messages without sending a read receipt, there is a Peek mode that lets you do just that. The UI also has a Smart Panel which lets you quickly launch your favourite apps and perform certain actions.

The Infinix Note 11's crisp AMOLED display makes watching videos engaging. It has good viewing angles and it gets bright enough outdoors as well. I couldn't find a way to tweak the output of the display, but there is an Eye Care toggle which puts the display into Reading mode. The Infinix Note 11 has an Always On display feature but it is disabled by default. The stereo speaker setup is loud enough for a small room.

The Infinix Note 11 was quick to unlock with the side-mounted fingerprint scanner as well as face recognition. I did not notice any slowdowns while using the phone. It could also multitask easily between multiple apps. As for synthetic benchmarks, the Note 11 managed to score 182,757 in AnTuTu. It also scored 371 and 1,336 points respectively in Geekbench 5's single-core and multi-core tests. In graphics benchmark GFXBench's Car Chase and T-Rex scenes, the Infinix Note 11 managed 8.2fps and 40fps respectively.

Battleground Mobile India (BGMI) defaulted to the HD graphics and High frame rate settings, . The game was playable at these settings without any issues. After playing for about 20 minutes, I noticed that the top half of the phone had become slightly warm. The Note 11 registered a 5 percent drop in battery level. I also noticed similar battery consumption after playing Clash Royale for 25 minutes.

Battery life is good, and the Infinix Note 11 will easily go on for over a day without needing to be plugged in. The phone also managed to keep idle battery drain low during the review period. Our HD video loop test went on for 14 hours and 28 minutes. Infinix has bundled a 33W fast charger, which got the battery level to 46 percent in 30 minutes and 86 percent in an hour. Charging speed tapers off after this point, and the phone took another 20 minutes or so to charge completely.

We've seen manufacturers dropping camera sensors from smartphones in this segment to keep prices under control, and the Note 11 is no exception. You get a triple camera setup on the Note 11, with a 50-megapixel primary camera, a depth sensor, and an “AI sensor”. The primary camera shoots 12.5-megapixel photos by default, but you can shoot photos at the full 50-megapixel resolution after tapping a quick toggle. For selfies, this phone has a 16-megapixel camera in the dewdrop notch, with an LED flash neatly hidden in the top bezel. The camera app is straightforward and easy to use, you can easily switch between different shooting modes.

The Note 11 has a triple camera setup

Daylight shots taken with the Infinix Note 11 appeared flat and lacked detail. Colours appeared washed-out and objects at a distance weren't easily recognisable. Photos shot at the full 50-megapixel resolution were 13MB in size but suffered from the same issues as those shot at the pixel-binned resolution, so the lack of detail makes them unsuitable for cropping.

For closeups, the AI was quick to detect what the phone was pointed at. However, the phone occasionally needed more time to lock focus, resulting in blurred shots when I wasn't patient. It managed decent edge detection and added depth to the background but did not capture the best detail on the subject. Portraits were slightly better, and the phone did let me set the level of blur before taking a shot. It managed to separate the subject and the background well. It could have done with slightly better sharpness, though.

Selfies shot with the Infinix Note 11 were decent in daylight and the phone also managed to capture good portraits. Low-light selfies were average, but the front flash did help in darker environments.

Video recording tops out at 2K for the primary and the selfie cameras. Footage isn't stabilised and the Ultra Steady mode only works at up to 1080p. This results in shaky results when shooting in the default mode. There is an Ultra Steady option but this caused a shimmer effect in video clips.

Making a budget smartphone isn't easy, and manufacturers often have to cut corners to get to a competitive price. The Infinix Note 11's camera performance isn't as good as what you can expect from some of the competition, and you might need more than one attempt at times to get a shot right.

However, if you are willing to overlook the sub-par camera performance, the Infinix Note 11 does offer good value. The crisp AMOLED display and dual speakers make it engaging to watch videos and play games on. Infinix has also added some useful software features, but the phone also has a few spammy stock apps. Those still looking for alternatives, can take a look at the Moto G31 (Review), which runs stock Android.