Infinix Hot 8 has potential on paper, but is the actual performance enough to make it rise above the competition?

Infinix has launched a slew of affordable phones in the past few months, packing features such as triple rear cameras in models that cost as little as Rs. 6,999. The company's latest offering, the Infinix Hot 8, is no different. It has a fresh gradient design on its rear panel and borrows from its siblings elements such as triple rear cameras, an entry-level MediaTek processor, and a large battery. Is that strategy enough to make the Infinix Hot 8 a phone we can recommend, especially over well-received options from Realme and Xiaomi? We review the Infinix Hot 8 to find out.

From the front, the Infinix Hot 8 could be confused for one of several generic-looking budget Android phones with waterdrop notches. The earpiece is located just above the notch, and a little to the left, one can find the soft LED flash strip that only becomes visible when the screen is turned on. It also lights up when the phone is being charged, but doesn't function as a notification light.

The back is where Infinix has tried to give some identity to its new phone. The rear panel of our Quetzal Cyan review unit had a peacock blue shade in the upper region, which gradually fades into black going downwards. The glossy surface has a glittery finish that also covers the fingerprint sensor. Infinix offers the phone in a Cosmic Purple colour option too, which simply swaps the blue in favour of a dark purple shade. 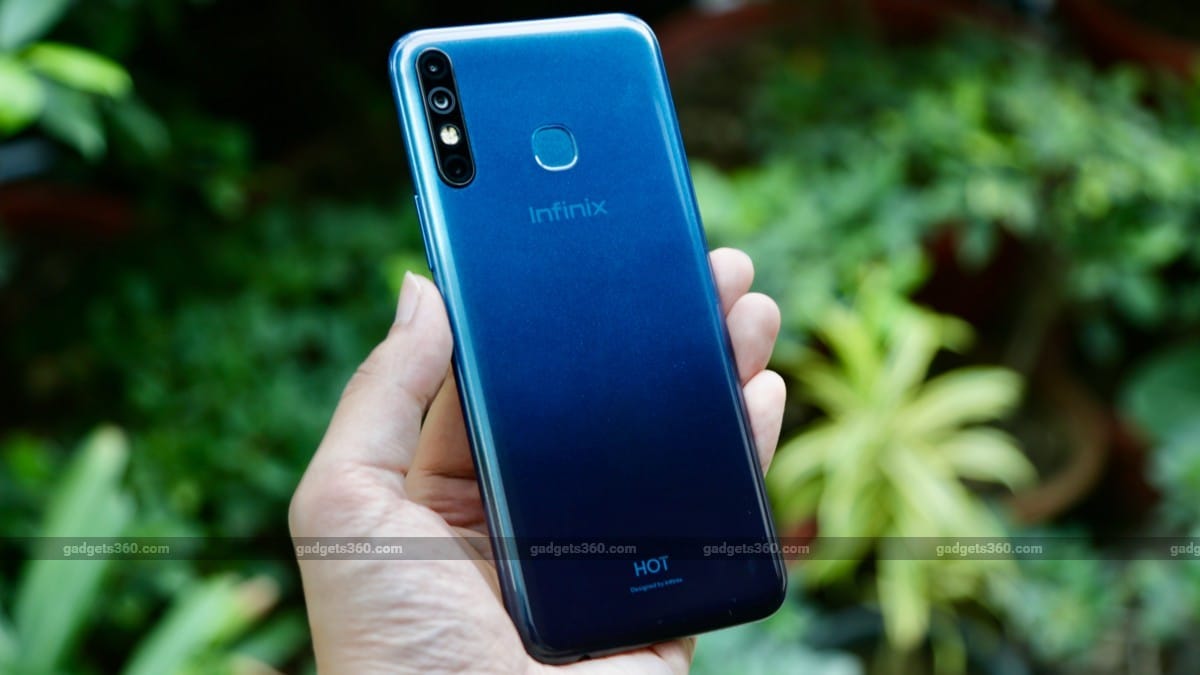 Infinix Hot 8's rear panel is made out flimsy material and easily flexes.

However, the rear panel appears to have been made out of flimsy material, and it flexes easily with even a gentle press, especially near the middle. It also picks up smudges rather easily. Thankfully, Infinix supplies a transparent protective case in the retail package.

The power and volume buttons are positioned within reach, and provide a clicky response. The 3-in-1 (dual Nano-SIM + microSD) tray is located on the left, while the speaker, Micro-USB port, and 3.5mm headphone jack are on the bottom.

The curved sides ensure a comfortable grip and at 165g, despite packing a 5,000mAh battery, this phone isn't too heavy either. However, the tall 20:9 display hinders ergonomics, as one-handed usage is simply out of the question. We often found ourselves adjusting the phone in our hand to reach for content on the upper half of the screen.

The dual-SIM Infinix Hot 8 packs a 6.52-inch HD+ (720x1600 pixels) display with a 20:9 aspect ratio and 90.3 percent screen-to-body ratio. The display has a peak brightness of 450 nits and produces decent colours. Even though the display is reflective, viewing content on it was not too bothersome, and the brightness was satisfactory even under daylight. In fact, the Infinix Hot 8 has one of the better displays we have recently seen on a phone in this price segment. 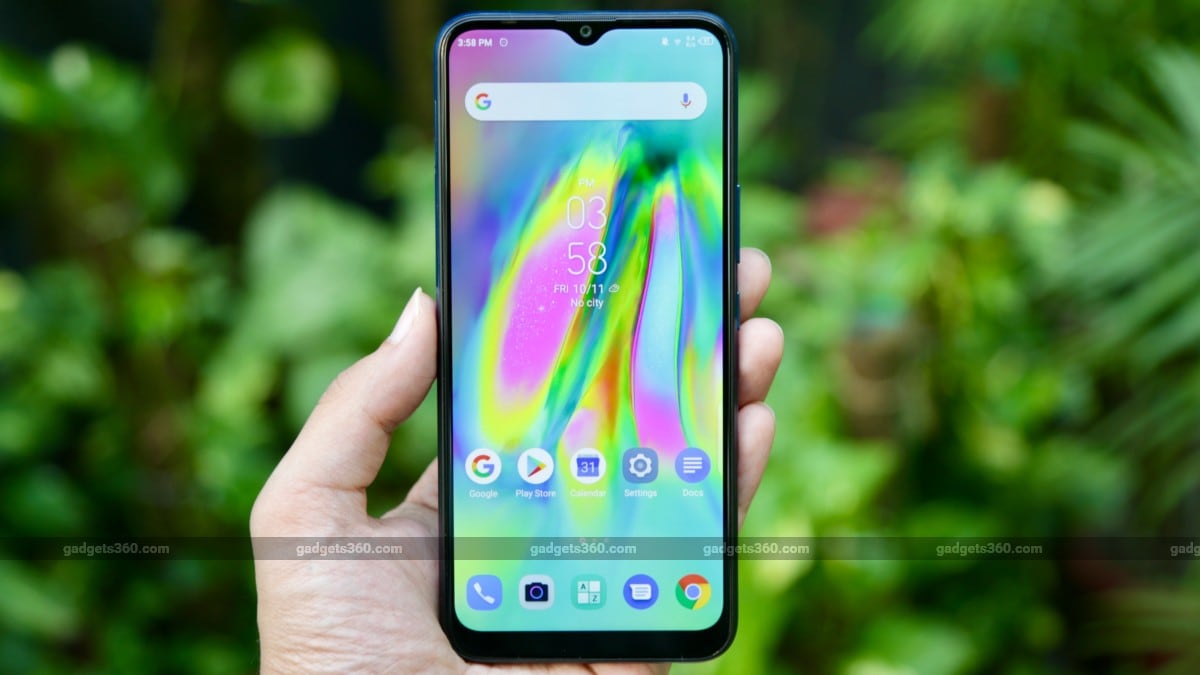 The display is bright, but the 20:9 aspect ratio makes it a bit too tall for comfortable usage

This device is powered by the octa-core MediaTek Helio P22 SoC clocked at 2.0GHz, paired with 4GB of RAM and 64GB of internal storage, which can be expanded by up to 256GB using a microSD card. Infinix sells the phone in a single 4GB + 64GB configuration which is priced at Rs. 8,999, but it has been available at Rs. 6,999 during online sales. It comes equipped with a 5,000mAh battery and a 10W charger is supplied in the box.

As for the cameras, the Infinix Hot 8 features a triple rear camera setup that includes a 13-megapixel main snapper with an f/1.8 lens, a 2-megapixel depth sensor, and a dedicated low-light sensor. On the front is an 8-megapixel camera with an f/2.0 aperture. The Infinix Hot 8's camera hardware is identical to that of the Infinix Smart 3 Plus (Review), and the two phones also share software tricks such as AI enhancement, AR Stickers, and a Bokeh mode, among other things.

The Infinix Hot 8 runs a custom skin called XOS 5.0, based on Android Pie 9. Our review unit received an update to the September security patch during the course of our testing. Unfortunately, the UI remains mostly the same as what we've seen on the Infinix Hot 7 (Review), the Infinix Smart 3 Plus (Review), and other phones from the company. There is a tonne of preinstalled bloatware, including in-house and third-party apps such as XTheme, XClub, AI Gallery, Opera News, ShareChat, Flipkart, Instagram, and Facebook. 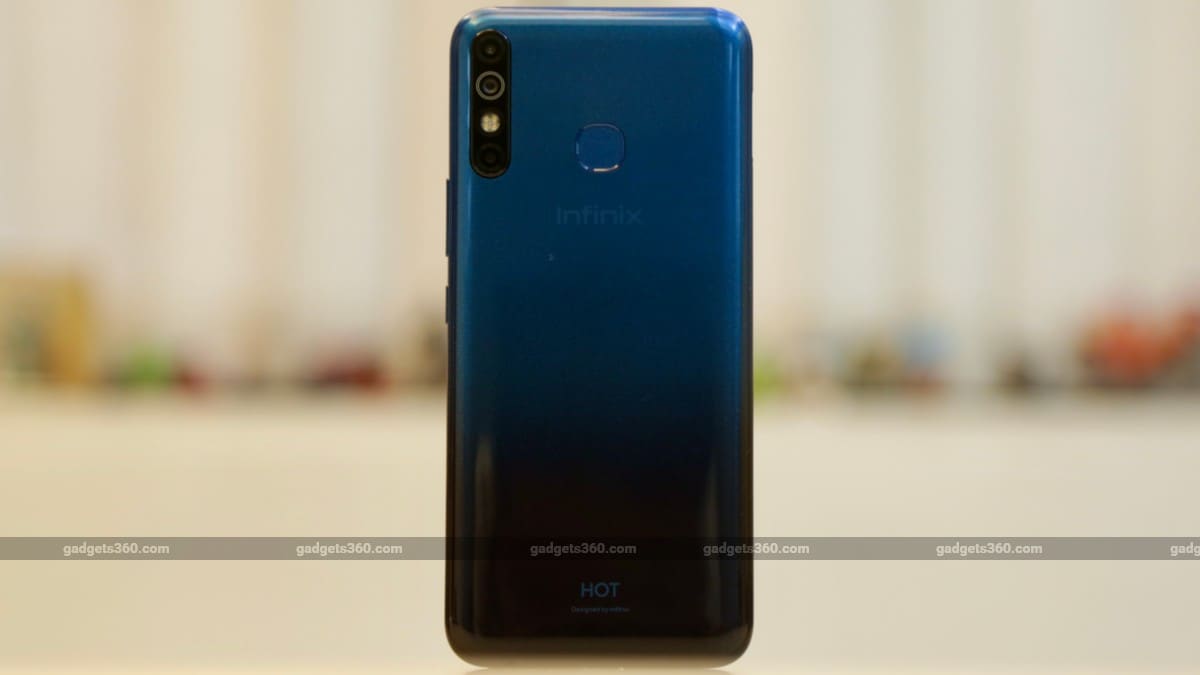 The Kika keyboard, which was recently removed from the Google Play Store for ad fraud, is still the default keyboard. On top of that, some of the preinstalled apps such as Palm Store show a lot of ads and send a barrage of notifications, which we found to be of little to no use. The swipe-based navigation gestures are not very easy to use, and often failed to work when we were running a game or multitasking.

On the bright side, XOS 5.0 does offer some useful features such as WhatsApp Mode, which restricts the cellular data access of all apps in the background except WhatsApp to limit usage. Then there is the Smart Panel, a customisable widget that contains shortcuts to frequently used apps and tools, and can be accessed by swiping right on the horizontal bar at the right edge of the screen.

The Freezer feature prevents specific apps of your choosing from running in the background. You can read more about XOS 5.0 in our Infinix Hot 7 Pro review. To sum up, despite offering a few useful tools, Infinix Hot 8's heavily customised Android skin needs a lot of refinement.

The MediaTek Helio P22 processor at the core of the Infinix Hot 8 is a decent performer as long as you stick to the basics. Tasks such as Web browsing, social media usage, and basic productivity were fine, but as soon as there were more than 10 apps or games running in the background, the phone started to stutter. The faltering navigation gestures worsened the experience for us. Multitasking was very sluggish at first, but the update we received improved that. 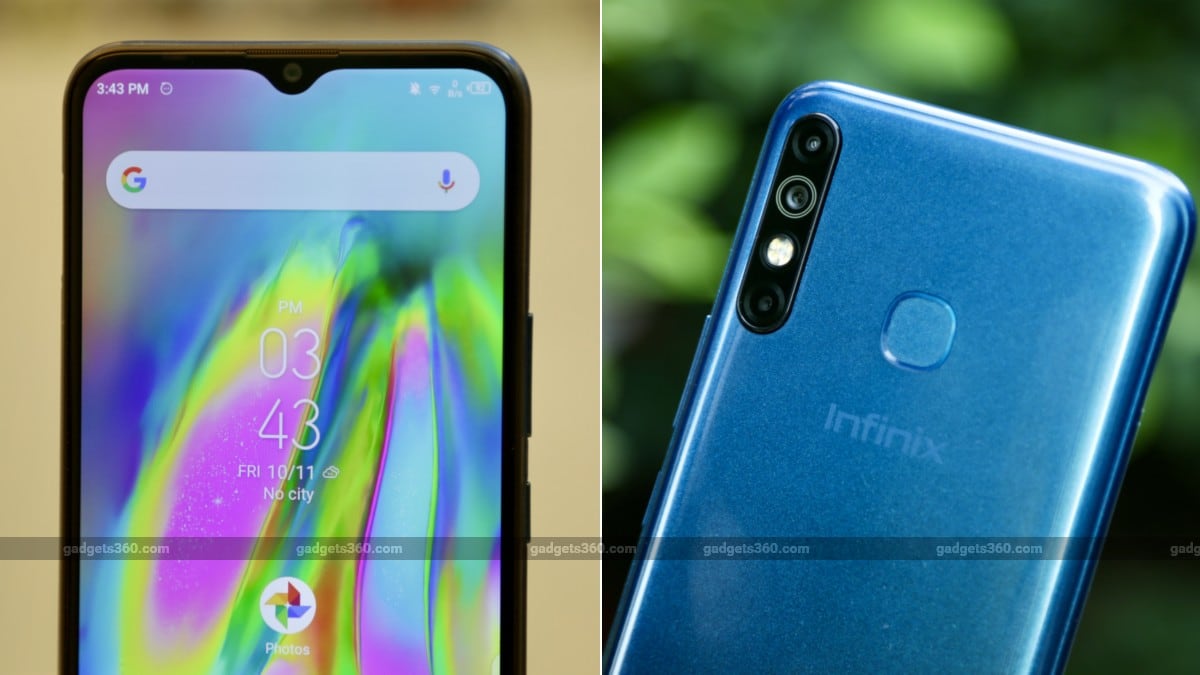 This phone was clearly not intended for people who need to switch between multiple apps frequently. Heavier apps and games took some time to load, and there were occasional instances of the UI freezing too. While casual games such as Mario Kart Tour ran fine, the likes of PUBG Mobile and Asphalt 9 failed to load even after repeated attempts, which isn't surprising given its entry-level hardware.

If you plan to use your phone only for day-to-day tasks, the Infinix Hot 8 should serve you fine, but putting too much stress on it will yield a sub-par experience. Thankfully, we did not feel this phone getting too warm while playing games.

Coming to synthetic benchmark scores, the Infinix Smart 3 Plus scored 891 in Geekbench 5's multi-core test, and 148 on the single-core test. The phone's AnTuTu tally stood at 81,453. 3DMark Sling Shot returned a score of 746, while the 3DMark Ice Storm Unlimited tally was 11,970.

Battery life is one of this phone's stronger suits. The phone's 5,000mA battery easily went past a day. With moderate usage that involved casual gaming, day-long Internet connectivity, using social media and productivity apps, and listening to music for at least a couple of hours using wired earphones, the phone lasted a day and a half. In our HD video battery loop test, the phone lasted for 17 hours and 21 minutes.

Starting with the camera app, basic camera modes and controls such as the AI Cam, Beauty, Video, Bokeh, and AR buttons are located in a strip above the shutter button, while HDR, flash, scene modes, and the aspect ratio are controlled by buttons above the viewfinder. Surprisingly, the Infinix phone can't capture photos in the 16:9 aspect ratio. The brightness control slider is also a bit finicky, and drastically changes the frame brightness with even a small adjustment. Another issue is that the shutter button often became unresponsive for a few seconds after switching camera modes. 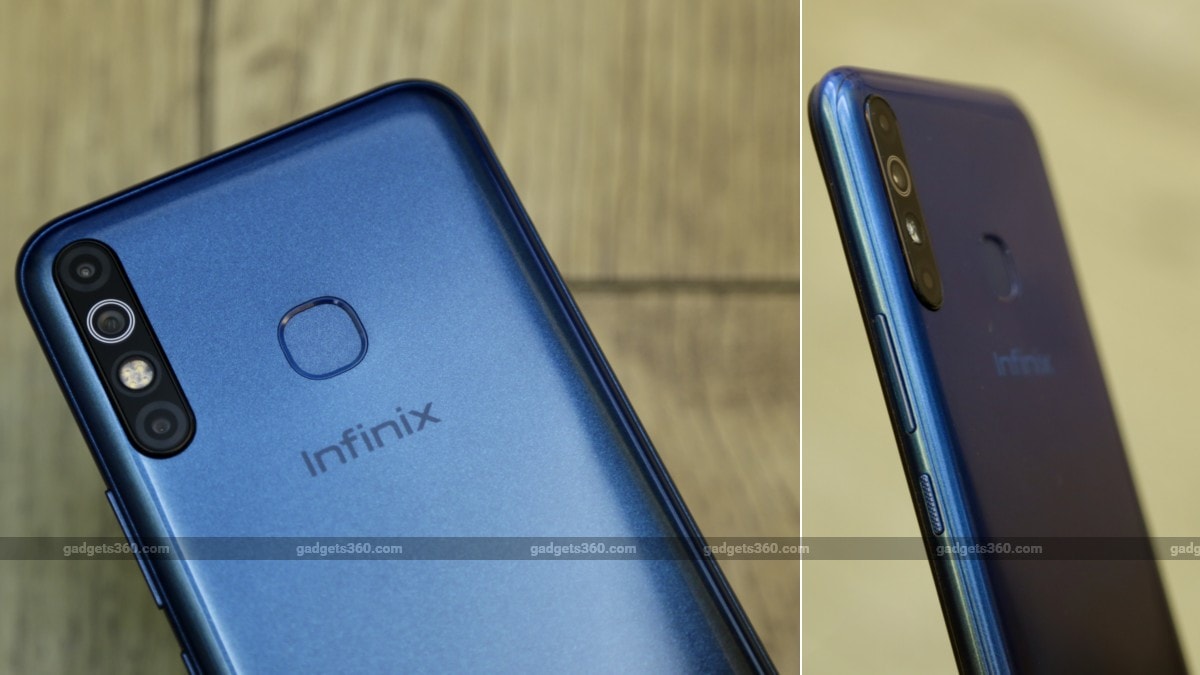 Infinix Hot 8 runs XOS 5.0, based on Android Pie 9, but there is a tonne of bloatware

As for photo quality, the images captured by the 13-megapixel main camera in daylight turned out decent. Autofocus was mostly accurate and the photos looked vibrant, although colours did appear slightly washed out. There is not much in terms of detail if you zoom in on a large screen, but the photos look sharp enough on the phone's display.

Dynamic range was also decent, but there was some noticeable softening around the edges and corners of each shot. We quite liked the fact that this phone does not oversaturate the colours of objects, and produced natural-looking results. When it comes to close-up shots, the Infinix Hot 8 punched well above its weight and produced crisp photos with a decent amount of surface detail and sharp edges. Colours turned out punchy, but the camera occasionally struggled with locking focus at close range.

Bokeh shots captured in daylight had acceptable subject separation and good colours, but edge detection was inaccurate. The dedicated Bokeh mode often struggled with complex objects and quickly lost focus with even a slight movement. We also noticed that the background got blown out even with a slight increase in brightness. There is a slider in the camera app that lets users adjust the blur intensity. One can also tweak the blur intensity and adjust the point of focus in the default gallery app after taking an image.

Indoor photos, especially those in low light conditions, looked grainy and had a lot of noise with muted colours and minimal sharpness. A dedicated night mode would have served better in such scenarios, but phones in this price bracket usually miss out on that luxury. 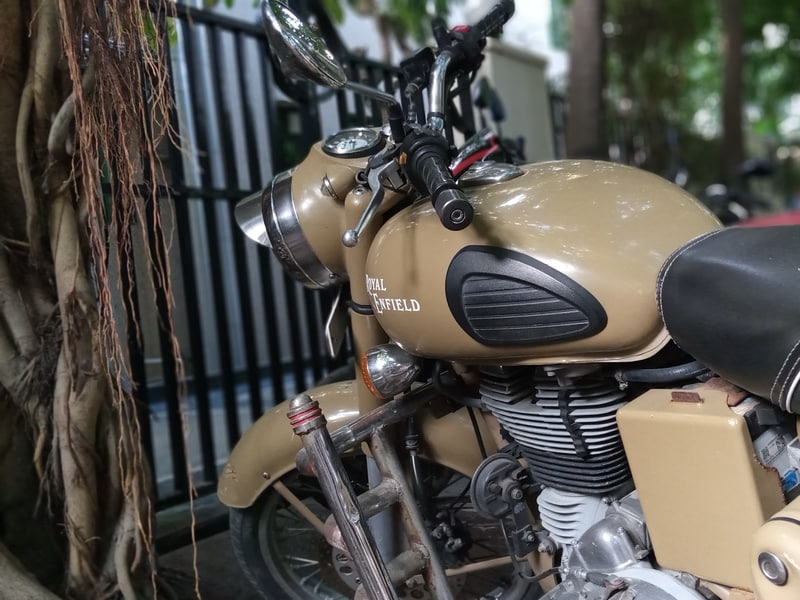 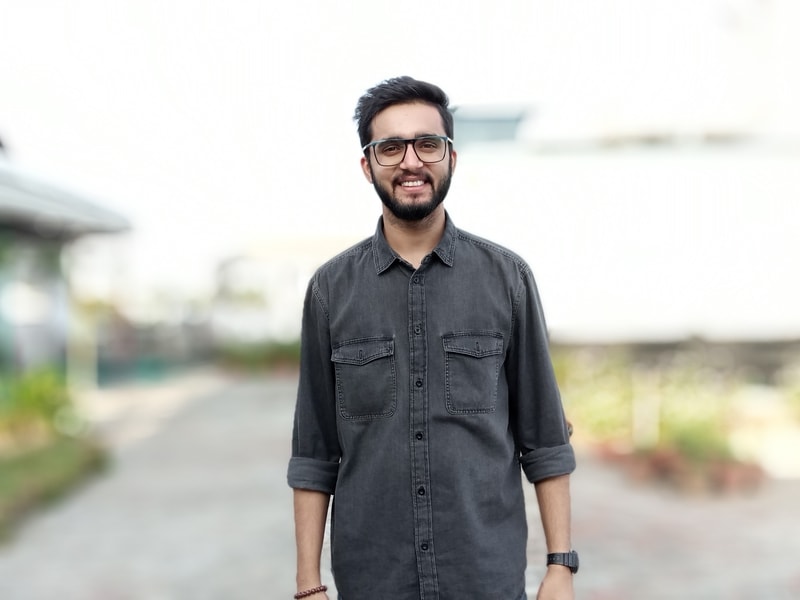 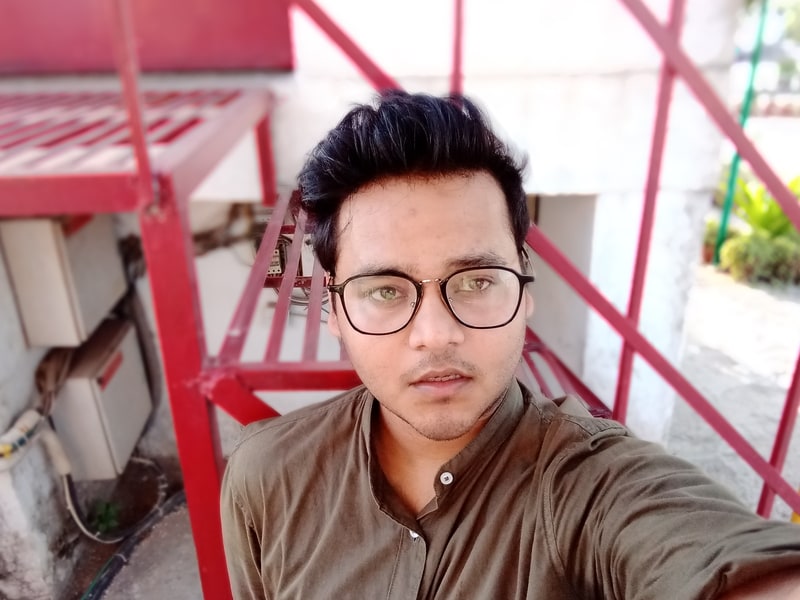 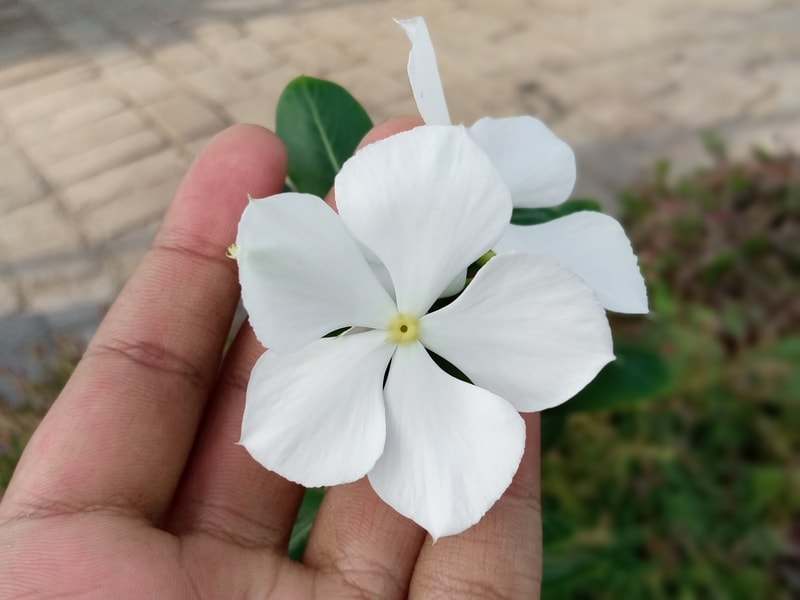 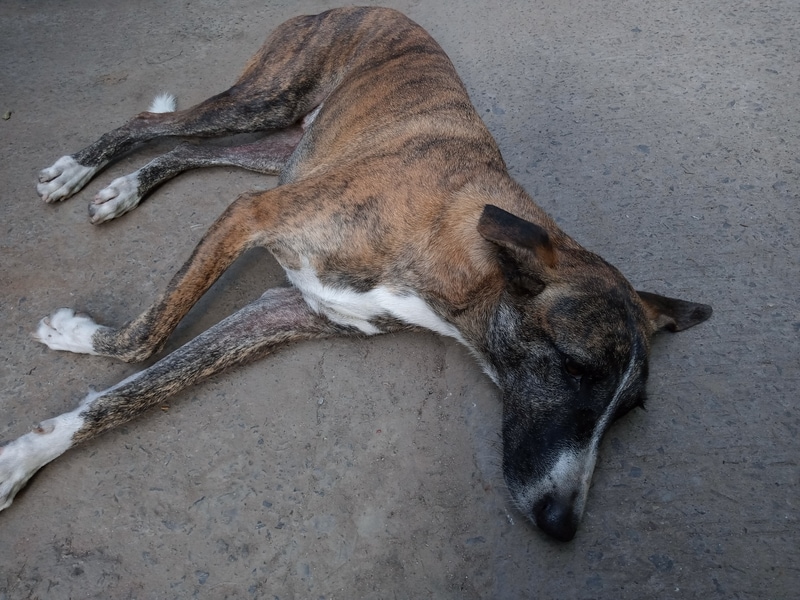 The 8-megapixel front camera captured photos that can be described as average at best. Sure, they can be posted on social media, but if you are looking for details like skin texture, you'll be disappointed. Daylight selfies looked vibrant, but some skin smoothening was clearly visible. As for low-light selfies, they were grainy and muted. The Infinix Hot 8 can record video at up to 1080p, but due to a lack of stabilisation, the footage is jerky and there are focusing issues as well.

The Infinix Hot 8 appears to offer capable hardware, especially for its discounted price of Rs. 6,999. However, despite packing 4GB of RAM, the phone struggled while multitasking, and XOS has its downsides too. The likes of the Redmi 7 (Review) and Realme 3i (Review) fare better with a less RAM, because they pack faster processors.

This phone's general performance is decent, provided you are not into playing heavy games. If camera output is your primary concern and you can live with some performance limitations, the Infinix Hot 8 could be a decent choice.

If you are looking to purchase a budget all-rounder that won't stutter or lag frequently, has decent cameras, and provides a polished software experience, the Redmi 8A is a good option. Other alternatives include the Realme 3i (Review) and Honor 8C (Review).