While Huawei's sub-brand Honor has been quite active in India, the company hasn't launched phones under its own name as frequently. The Huawei P20 Lite is one of the two new smartphones launched by the Chinese giant in India, the other being the P20 Pro (Review). Despite sharing the P20, the Lite has little in common with the Pro, though it features a glass-and-metal body, dual rear cameras, a 19:9 display, and runs Android 8.0 Oreo out of the box.

Priced at Rs. 19,999, the Huawei P20 Lite aims to take on the likes of the Redmi Note 5 Pro, Oppo F7, and Honor 9i. Is Huawei's smartphone a 'notch' above the competition? Let's find out in our full review.

The Huawei P20 Lite has a glass back and an aluminium frame for rigidity. The smartphone has a very sleek and clean design with no antenna lines at the back, smartly integrated dual cameras, and minimal screen borders up front. Thanks to the 80.55 percent screen-to-body ratio, the P20 Lite is quite compact and pocketable. The rounded corners and curved edges also make it feel good in the hand.

The glass back looks and feels premium and helps the P20 Lite stand out from the hordes of metal-clad mid-range smartphones. A glass back does have its own set of caveats though. Not only does it scratch easily, it is an absolute fingerprint magnet as well. 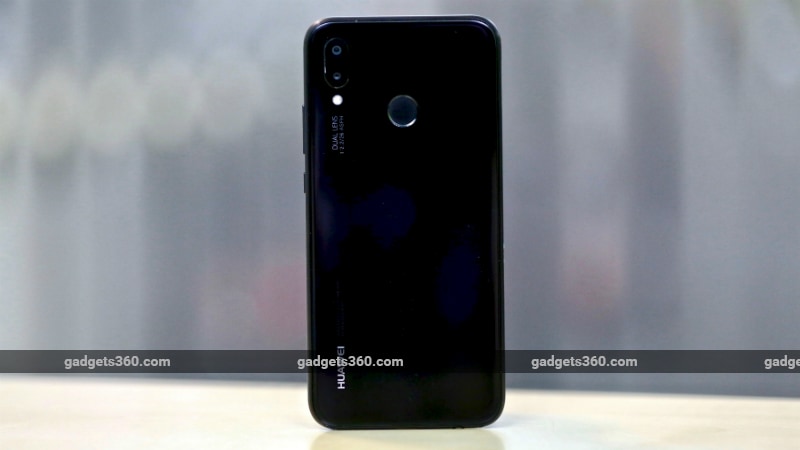 The front fascia of the smartphone is dominated by the 5.84-inch display. It has a notch at the top, which is thankfully quite small. There is an option in the settings menu to mask the notch, which basically darkens the screen area on either side of it. The glass back panel houses the vertically stacked cameras, and there's a centrally located fingerprint sensor that is quite fast and accurate.

While quite small and fiddly, the power and volume buttons on the right are ergonomically placed. The left of the smartphone houses the hybrid dual-SIM tray, which forces you to choose between a second SIM and a microSD card.

While glass is not usually associated with durability, the P20 Lite is quite solidly put together. We dropped the phone many times during our review period, and apart from a few scratches here and there, it did not incur any long-lasting damage.

The Huawei P20 Lite is powered by Huawei's own HiSilicon Kirin 659 processor. This is the same processor found in several mid-range Honor smartphones such as the Honor 9i, Honor 7X, and Honor 9 Lite. The smartphone also has 4GB of RAM and 64GB of storage which can be expanded using a microSD card.

The P20 Lite features a 5.84-inch full-HD+ (1080x2280 pixels) display that dominates its front. It has an aspect ratio of 19:9 and a pixel density of 432ppi. The display is bright, vivid, and punchy, and is one of the highlights of this smartphone. Viewing angles are spot on and the 19:9 aspect ratio lends itself well to gaming and multimedia consumption without the notch getting in the way.

When it comes to performance, the Huawei P20 Lite is a bit of a mixed bag. In our experience, the smartphone tackled basic day-to-day tasks like browsing the Web and using social media applications with relative ease, but struggled a bit when pushed. With a multitude of apps open in the background, a certain amount of lag and stutter crept in.

The smartphone handled heavy games such as Asphalt 8 reasonably well, but the odd dropped frame and stutter were noticeable at times. As the benchmarks numbers testify, the Kirin 659 processor cannot compare to Qualcomm's newer mid-range processors in terms of raw power. 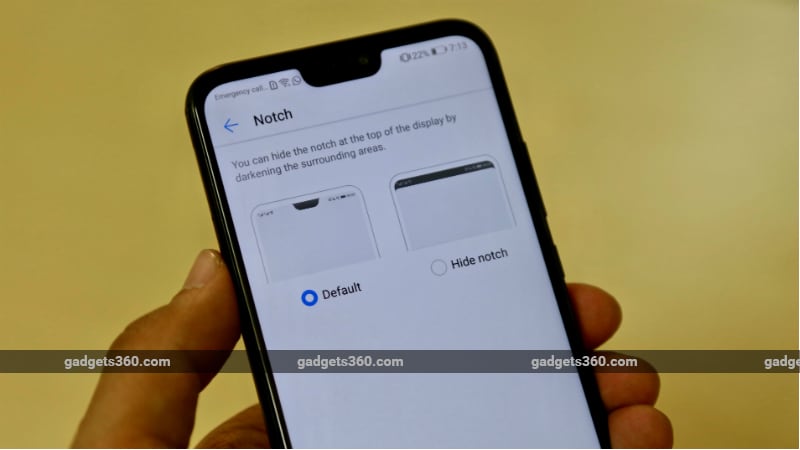 While the Huawei P20 Lite managed a respectable 86,425 in AnTuTu, its scores in other benchmarks were lower than the competition. The phone achieved 19fps in GFX Bench T-Rex, 216 in 3DMark Sling Shot Extreme, and 924 and 3,658 respectively in Geekbench's single- and multi-core tests.

On a positive note, the smartphone did not get too warm even when pushed. Calls were clear and crisp, and 4G connectivity was solid. The P20 Lite has a single loudspeaker at the bottom which does get reasonably loud but distorts at high volume and is quite shrill.

The P20 Lite runs Android 8.0 Oreo out of the box, with Huawei's EMUI 8.0 custom skin on top. EMUI has made massive strides over its past few iterations and is now noticeably more responsive. Huawei claims that EMUI 8.0 is 60 per cent faster and 50 per cent smoother than EMUI 5.1, and it is evident.

That said, EMUI is still quite cluttered and needs simplification. There is a lot of bloatware on board such as UC Browser, Truecaller and a host of game demos. Thankfully, most of these can be uninstalled. On the other hand, EMUI has a host of nifty features such as a one-handed mode, an intelligent messages app that filters out unwanted messages, and Wi-Fi+, which automatically switches between Wi-Fi and mobile data depending on which connection is stronger. 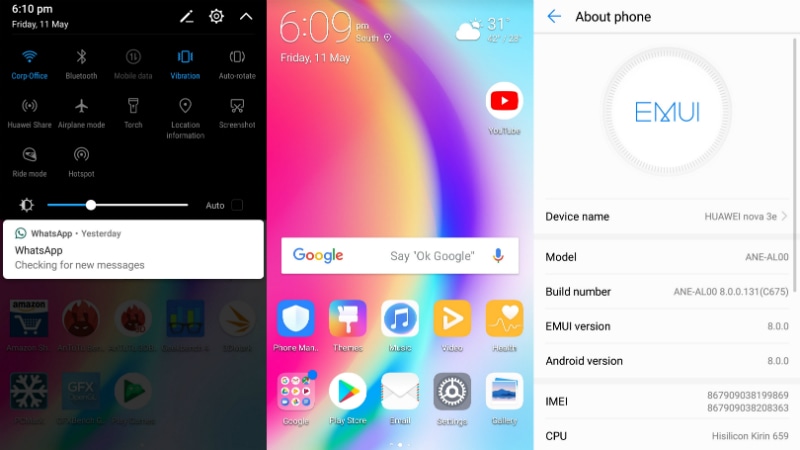 EMUI 8.0 also has a multitude of gestures such as a three-finger swipe to take a screenshot, and flip to mute. Huawei has not announced an update roadmap for the P20 Lite - there is no information about if or when the P20 Lite will get Android P.

As with most smartphones these days, the Huawei P20 Lite supports face recognition, which worked quite well as long as lighting was favourable. It did not work well in dimly lit environments or under direct sunlight.

Battery life is pretty mediocre. In our HD video loop battery test, the P20 Lite lasted just 9 hours and 10 minutes, which is quite disappointing and quite a bit below the average for this market segment. With light to medium use, we found ourselves reaching for the charger by 7-8pm each day. EMUI 8.0 has a bunch of battery saving features, one of which reduces the screen resolution when you're running low on power. The smartphone does not support quick charging, and a full charge takes a disappointing 2 hours and 40 minutes.

The camera app is fairly easy to use and offers a wide variety of modes such as Night Shot, Panorama, and Time-lapse. There is a fully featured Pro mode as well, which allows you to alter the shutter speed, ISO, exposure, aperture, and white balance. AR stickers are implemented quite well and are a fun way to impress friends and kill some time. 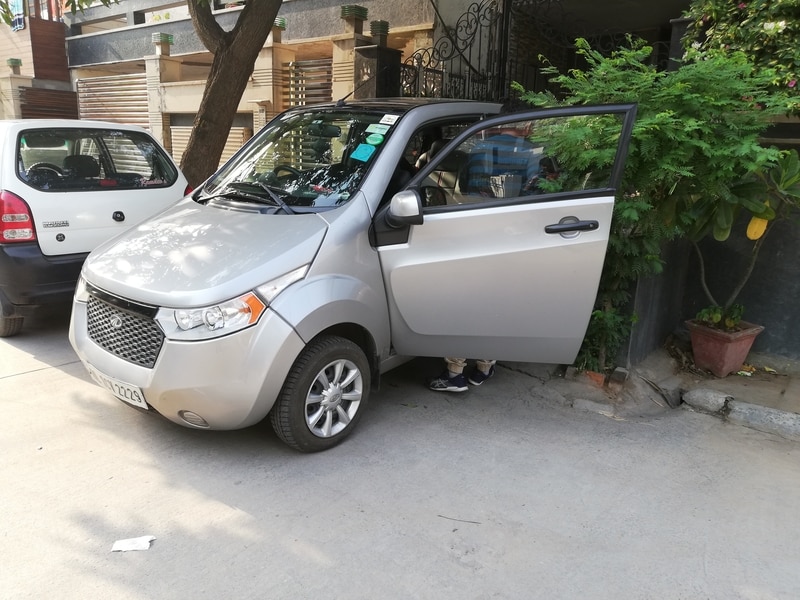 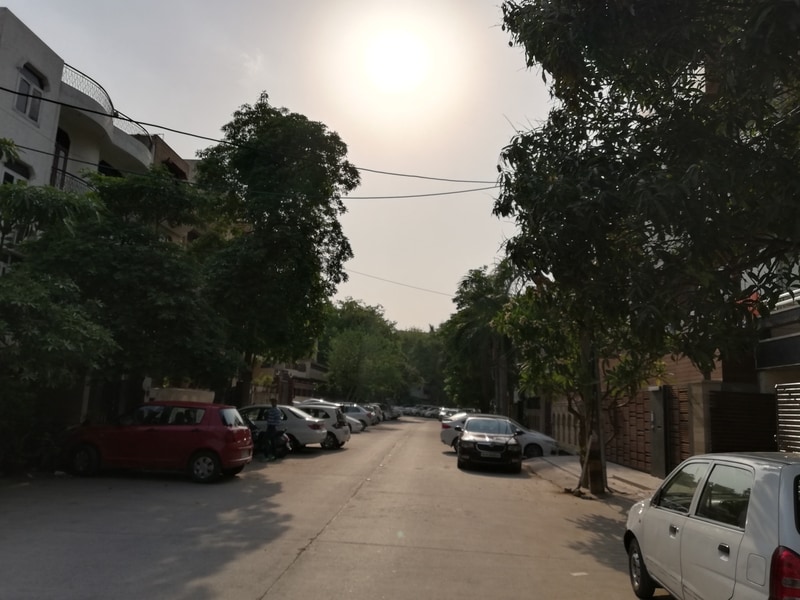 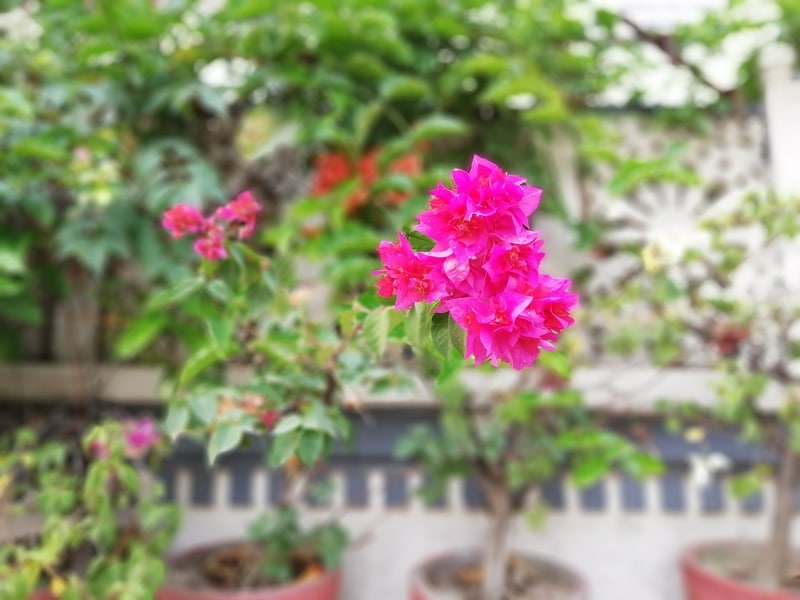 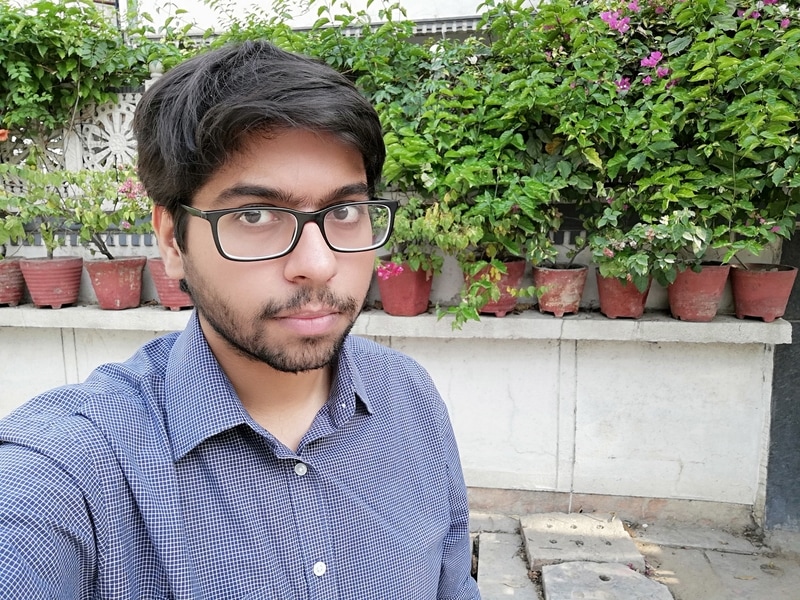 Photos taken with the P20 Lite in favourable light are quite impressive. The level of detail and colour accuracy are great, and the rear camera has good dynamic range. The wide aperture mode allows you takeshots with depth-of-field effects, which are decent at best with average edge detection. Low-light performance is not as good - noise is kept more or less under control, but photos are lack detail and seem slightly over-sharpened.

The front camera struggles in low light but manages to capture a fair of bit of detail otherwise. There is no front flash or screen flash of any kind to help out in low light. Video recording maxes out at 720p for the front camera, while the rear is capable of 1080p video recording. Videos are nothing to write home about, and lack detail. 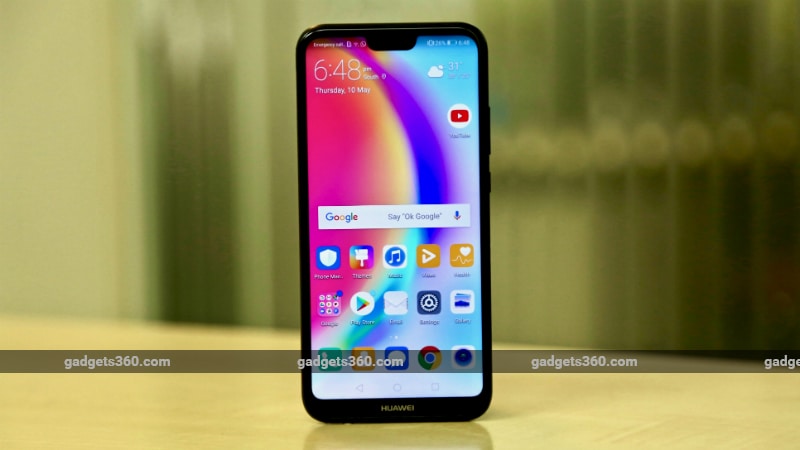 Verdict
The Huawei P20 Lite is a compact and good-looking smartphone with a crisp and vibrant display, Android 8.0 Oreo out of the box, and decent cameras. That said, its battery life is underwhelming at best, EMUI is still cluttered, and performance is below average.

If you want a modern-looking phone with a great display, the Huawei P20 Lite is a good choice. However,the Redmi Note 5 Pro is hard to beat as an all-rounder, and costs quite a bit less. Potential buyers should also look at the Honor 7X and Honor 9i, which offer similar hardware for less money. Alternatively, you could spend a little more for a much more exciting phone, such as the Moto Z2 Play which offers modular expansion via Moto Mods, or the Honor 8 Pro which has stellar rear cameras.