While the market is mushrooming with phones or rather phablets from Indian brands that feature 5-inch+ displays and quad-core processors, many would prefer a phone that comes with a mid-size 4.3 to 4.5-inch display and offers a decent smartphone experience.

The Huawei G510 is an economically priced Android smartphone that offers a balanced specifications set with Android, Jelly Bean in a compact form factor. We try to find out if the phone is a decent buy at a price of Rs. 10,990.

Build/ Design
The Huawei G510 is a plain looking phone that doesn't arouse any emotion at first glance. The phone is a black rectangular slab with rounded corners. The front is dominated by the 4.5-inch screen, with the three capacitive buttons - Home, Menu and Back, for navigation just below it. The front facing camera, a notification light and proximity sensor sit above the display with the earpiece grill and a Huawei logo.

The phone has a removable back cover that wraps around the phone and even houses the power/screen-lock key and the volume rocker, that are located at the left side of the phone. Most smartphones feature the power button on the right side, so the arrangement feels a little awkward for someone who is used to it being otherwise. The Micro-USB port is also located on the left side of the phone, while the 3.5mm headset jack sits on the top. There are no ports on the bottom and on the right side of the phone. The back cover has a textured pattern making the surface rough and less slippery. A part of the back cover is also contoured with the edges giving the impression that it's removable, though the indented cut that's actually used to remove it is located further just below the screen. The back camera lens is located towards the top surrounded by a round ring-like contoured surface that's slightly raised. The LED Flash and a speaker outlet are located at either sides of the lens. 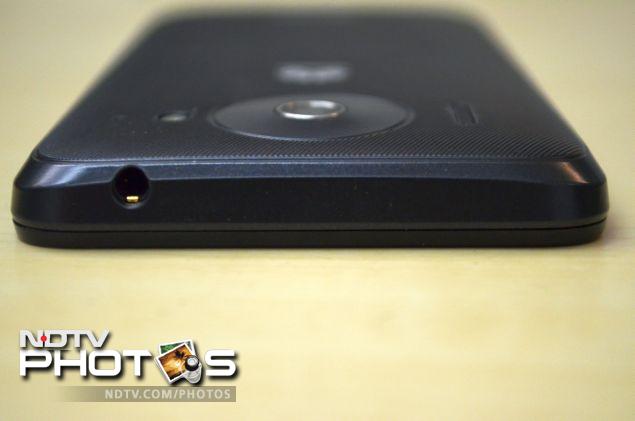 Overall, the device is not very aesthetically pleasing but the plastic material still feels durable and we didn't notice any creaks or wobbles while handling the phone.

Display
The Huawei G510 sports a 4.5-inch screen that has a resolution of 480x854 pixels and colour depth of 16 million colours. The screen has an IPS panel for wide-angle viewing. We found viewing angles to be good although the screen is very reflective which at times makes it difficult to view content. Under-sun legibility is also average. 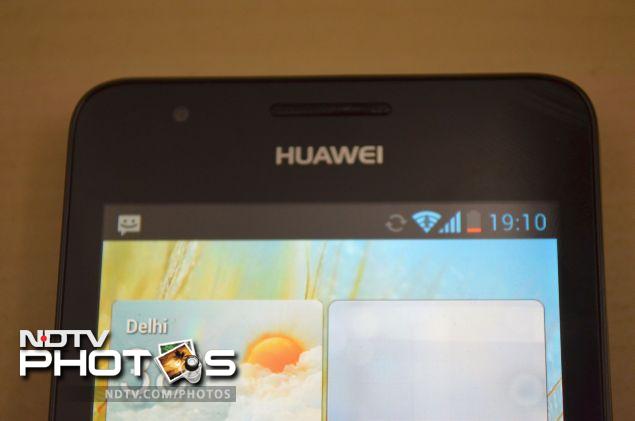 The screen renders text, images and icons sharply and the size makes it optimum for watching videos. We also found the touch response of the screen to be good. 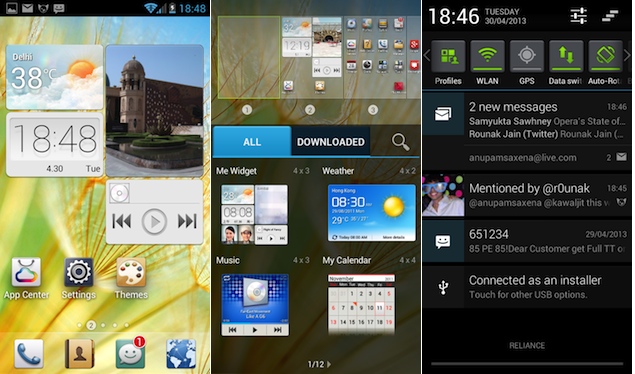 Users can add up to 9 home-screens that can be populated with widgets and app icons. There's a dock at the bottom where five of your preferred app shortcuts can be placed. This dock is static across all the home screens. One can customise the complete look and feel of the interface with themes that offer different icon sets, backgrounds, fonts and even notifications and ringtones. The phone comes with 5 themes with the option to download more from an online store. It even offers 9 different transition effects to choose from.

The notification tray includes toggles for settings such as Wi-Fi, Brightness, Rotation, Bluetooth, GPS, Data, Screen timeouts and profiles (for alerts, other notifications and settings). More toggles can be added to the panel.

The notification tray also features a settings shortcut and a clear all notifications button, along with expandable notifications (expanded with the two finger pull gesture). Android 4.1 Jelly Bean also brings in Google Now, which needs to be initialised for the first time, before use.

For the uninitiated, Google Now is a voice based information assistant and an extension of Google search. You can ask questions and the tool returns answers or search results. It uses 'cards' which are essentially small boxes that offer different sets of information ranging from weather forecast, directions, traffic information, scores, appointments, and currency conversion, among others. Google Now collects information based on the user's behaviour, location, and even e-mail, to offer information automatically.

The three capacitive buttons, Back, Home and Menu help in navigating through the phone, with the Home button also doubling up as an app switcher/ task manager on long press.

The Emotion UI tries to make things simple for new smartphone users and makes the interface as different from stock UI as possible. At times it adds customisability and eye candy but at others we're not sure it's the best implementation, and we prefer the stock Android UI. 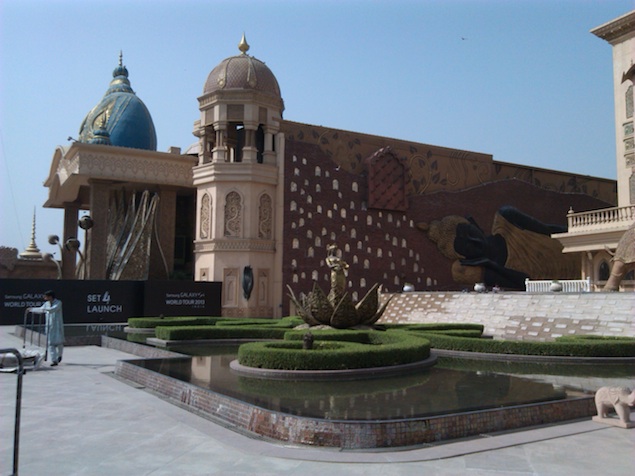 The camera app is a little different from the stock Android camera app and also features the Panorama mode. The camera app features settings for white balance, exposure and ISO. The camera can only shoot videos in VGA mode and doesn't offer 720p recording. Videos captured through it were just about average. 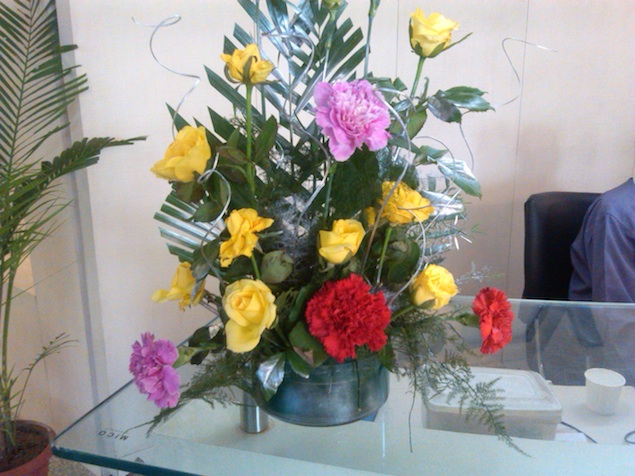 The front camera is strictly functional at best but can be used for casual video chats.

Performance
The Huawei G510 is powered by a 1.2GHhZ Qualcomm ARM Cortex-A5 dual-core processor with 512MB RAM onboard and Adreno 203 GPU. There is 4GB of internal storage, however only 1GB storage is available to the user as a large part is occupied by Huawei apps that are not removable. Users can expand the available storage by adding microSD cards of up to 32GB capacity.

The overall experience of navigation through the interface was at times a little slow which might be due to the heavy skinning. We also noticed lag while running multiple apps in the background which could be due to the limited RAM.

We did not experience much lag while playing casual games or scrolling web pages but graphics intensive games don't run too smooth.

We were not able to play full-HD clips, and the phone's native video player doesn't support formats like .AVI and .MOV natively. The speaker on the phone delivers good quality sound at high volume levels. The headphones that come with the phone offer average quality sound output. The phone also featured FM radio.

Call quality was good, during our testing process but we faced network issues in weak signal areas. 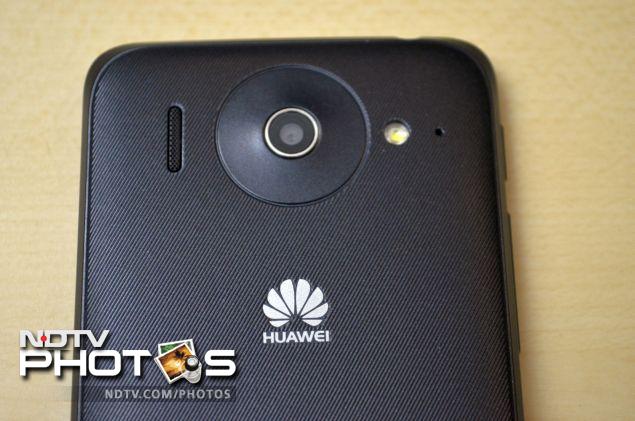 The phone comes with a 1,700mAh battery, and based on our experience, it will last more than a day with moderate to heavy usage including 1-1.5 hours of phone calls, two e-mail accounts with push notifications, screen at maximum brightness, playing some music and video clips, Twitter notifications and WhatsApp chats. It's also worth pointing out that we had turned off Wi-Fi and auto-brightness, and the phone was hooked to a 3G network. Altering these settings might help in running the phone for a longer duration, depending on your usage pattern.

Verdict
The Huawei G510 is a decent Android smartphone that offers good features in a budget of Rs. 10,990. However, it's not the best phone that money can buy at this price.

At the same price, you can buy the Karbonn S1 Titanium, which has a quad-core processor, and sports a 4.5-inch qHD (540x960) multi-touch capacitive touch display and runs Android 4.1 Jelly Bean. The XOLO A1000 is another phone to look out.

The Spice Stellar Pinnacle Mi-530 and Micromax Canvas HD are also great phones that offer a better smartphone experience, if you can bump up your budget a bit.