After launching its HTC U11, aka the 'squeezable' smartphone, in Taiwan last month, HTC has now launched it in India. While internationally, HTC has introduced two memory/storage variants, i.e 4GB RAM/64GB storage and 6GB RAM/128GB storage, it has brought only the latter variant to India. The smartphone has been priced at Rs. 51,990 and will be available through Amazon India and through offline channels starting from the last week of this month, in Amazing Silver and Brilliant Black colour options.

The HTC U11's unique selling point is its Edge Sense feature, but it also has a lot of other things going for it in terms of the spec-sheet - it uses Qualcomm's latest Snapdragon 835 processor, and has an impressive 6GB of RAM. We got our hands on the device at HTC's India launch event, and here are our first impressions.

The first thing that you will notice about the HTC U11 when you pick it up is its glossy back. Just like the HTC U Ultra that came out earlier this year, the U11 also has a shiny glass back. It looks great, especially because of the vibrant colours that HTC has chosen, but the glass is slippery and also a fingerprint magnet.

The HTC U11 measures 153.9x75.9x7.9mm. It is not very hard to hold with one hand, but people with smaller hands might have issues handling this phone. It's rated IP67 for water and dust resistance.

Coming to the 'squeezable' part, HTC has introduced a feature called Edge Sense with the U11. This allows users to launch apps, turn on the flashlight, or even take screenshots by simply squeezing the sides of the device. Pressure sensors allow it to recognize the intensity and duration of squeezes. Users can assign different functions based on the pattern, for example, you can use a light press to launch HTC's digital assistant, and a longer squeeze for taking screenshots. 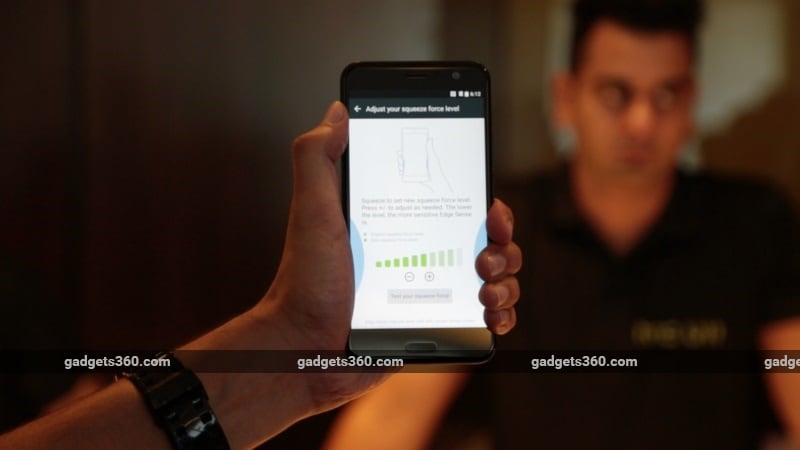 HTC has promised that it will be adding more functionality to the feature in coming months. In our limited time with the smartphone, we found that the Edge Sense feature useful but didn't feel that it adds great value to the phone as of now. However, these are just our first impressions and you will have to wait till we conduct a full review for our final opinion on the new feature.

Moving on to the display on the HTC U11, the smartphone packs a 5.5-inch Quad HD (1440x2560 pixels) Super LCD screen with Corning Gorilla Glass 5. In our time with the phone, we found the display quality of the smartphone to be impressive.

As this phone is missing a 3.5mm headphone jack, HTC bundles its USonic earphones with the HTC U11, as well as a USB Type-C adapter. We found the quality of audio offered by these earphones to be excellent.

The HTC U11 runs on Android 7.1 Nougat with the HTC Sense skin on top, and supports two Nano-SIMs. Thanks to its powerful 2.45GHz quad-core Snapdragon 835 SoC and 6GB of RAM, the smartphone didn't even seem to hiccup even a little while launching apps, in our brief time with it. As we stated earlier, these are our first impressions, and our full review will contain in-depth analysis of the HTC U11's performance. 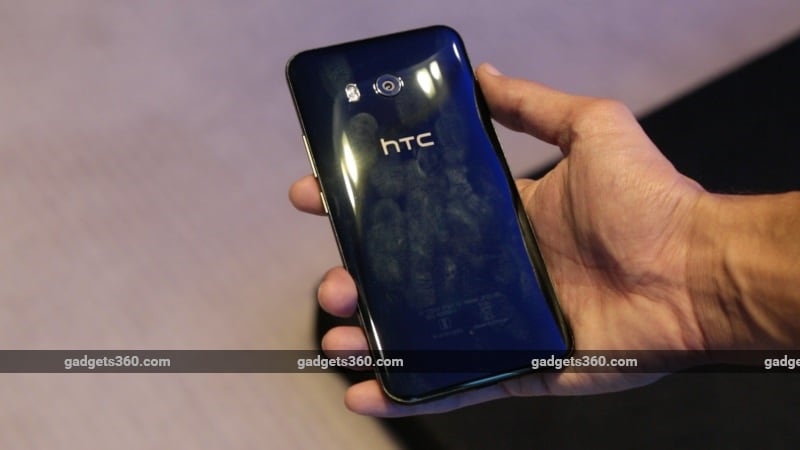 The HTC U11 has a 12-megapixel primary camera with what the company calls "ultra-spread autofocus", a BSI sensor, optical image stabilisation, a f/1.7 aperture, and a dual-LED flash. It can record video in slow-motion, and the resolution goes up to 4K. In the front, we have a 16-megapixel camera with a BSI sensor which can record full-HD video. In our brief tests, we found that pictures taken with both front and rear cameras were crisp and clear.

Priced at Rs. 51,990, the HTC U11 will be competing against premium flagships including the Samsung Galaxy S8, LG G6, and Apple iPhone 7. While it seems good enough in terms of performance, it remains to be seen whether HTC will be able to make this phone stand out from its more established competitors. For our full review of the smartphone, stay tuned to Gadgets 360.

Further reading: HTC U11 First Impressions, HTC U11 Specifications, HTC U11 Features, HTC U11 India Price, HTC U11 India Availability, Mobiles, Android, HTC
YouTube Is Down, It's Not Just You
product The HTC U11 has a powerful Snapdragon 835 processor, but its most unique feature is that you can squeeze it from the sides to perform actions.