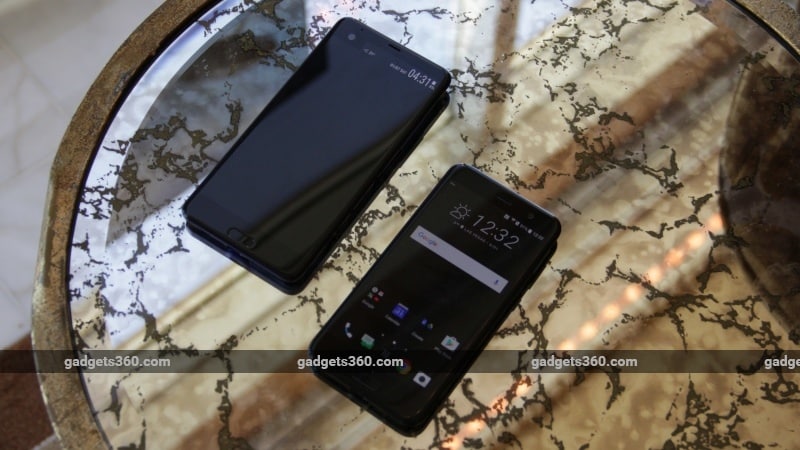 With the new HTC U Ultra and HTC U Play, the company is betting big on it’s new AI assistant called Sense Companion, which it claims will learn your usage behaviour over time in order to present you with priority notifications and alerts based on people you contact the most. On the HTC U Ultra, the second ‘ticker-style’ display, called the Priority Screen, is where Sense Companion will display important alerts and notifications. The implementation of the display is very similar to LG’s approach with its X Screen (Review) and V20 (Review) smartphones.

According to HTC, you’ll need to manually perform an initial setup of Sense Companion on the HTC U Ultra and HTC U Play, which involves adding your favourite contacts and apps in order to “train” the AI, after which it’s supposed to automatically manage this for you. One scenario that was presented to us was that the AI will be able to alert you if your phone needs a charge, depending on your schedule for the day. This way, it could warn you that your phone will not make it through the commute to work or home before you actually set off, if that's your typical pattern. Sense Companion was developed in-house by HTC, and will work independent of Google's voice assistant.

We’re also told that the HTC AI will be able to understand your consumption patterns as well. For instance, rather than simply recommending restaurants around you, it will learn how you order food - based on restaurant ratings and proximity - and over time, when it’s gathered enough data, it will offer prompts to the places you are most likely to order from. The same goes for the weather. Instead of alerting you with weather alerts every day or hour, Sense Companion will only alert you when the weather is unusual. At launch, Sense Companion is said to work with only some of the core HTC apps, with more to follow in the coming months.

HTC U Ultra and HTC U Play Have Biometric Voice Recognition

Both HTC U Ultra and HTC U Play phones feature biometric voice recognition, which means you can train them to respond to commands given only by you. The biometric capabilties help authenticate you so you’ll be able to wake the phone from sleep to perform a task, without having to unlock it manually. The HTC U Ultra has four microphones with an always-listening feature, 3D audio recording and range of around two metres. Both smartphones are said to ship with HTC’s new USonic earphones which feature microphones in the earbuds to map your ear canals to dynamically adapt audio frequencies to each individual's ear. Sound can then be customised depending on the type of music you listen to and ambient noise around you. The earphones also support high-resolution audio playback and work over the USB Type-C port.

HTC U Ultra, HTC U Play Design and Specifications

The HTC U Ultra and HTC U Play mark HTC's move away from metal unibodies for its premium offerings. The phones now feature a 3D contoured glass design, which HTC refer to as “liquid surface”. The high-gloss design looks amazing, and you have a choice between blue, black, pink and white. We thought the blue looked the most striking. However, there’s no escaping fingerprints here, and that’s the price you pay for all this bling.

The HTC U Ultra features a 5.7-inch Quad HD display and is powered by a Qualcomm Snapdragon 821 SoC, with 4GB of RAM and 64GB of storage which is expandable by up to 2TB. HTC will also offer a premium version of the HTC U Ultra which will have sapphire glass and 128GB of storage. On the other hand, the HTC U Play has a more palm-friendly 5.2-inch full-HD display and an octa-core MediaTek Helio P10 SoC, plus either 3GB or 4GB of RAM and either 32GB or 64GB of in-built storage.

The overall design and layout of the buttons is quite similar to that on the HTC 10, which is not a bad thing. There’s a single speaker grille and a USB Type-C port at the bottom, while the SIM tray is placed on the top. Both phones ditch 3.5mm audio sockets, a trend HTC seems to be embracing. The HTC U Ultra and HTC U Play feel incredibly well crafted and premium in every respect. The HTC U Play is a lot more manageable when it comes to single-handed use, but the HTC U Ultra should have its share of takers too.

Last but not least, these phones' cameras are also going to be important selling points. The HTC U Ultra features a 12-megapixel UltraPixel 2 rear camera with support for OIS, PDAF, laser autofocus, and Auto-HDR. On the front, there’s a 16-megapixel sensor which has the ability to switch to ‘UltraPixel mode’, which according to HTC, is about four times more sensitive to light compared to the standard mode. The HTC U Play also offers the same trickery for the front camera, but its rear camera has a 16-megapixel sensor with similar features as the HTC U Ultra, minus the laser autofocus.

The time we spent with the HTC U Ultra and HTC U Play was not enough to form any definite opinion. The units that we played around with weren’t even running their final firmware, which we're told could be a lot different from what we saw. However, the hardware seems solid as always, and if the HTC 10 was anything to go by, we should expect a lean version of Android 7.0.

HTC says that the U series marks a new direction for the brand, with AI taking centre stage. The company also plans to roll out AI updates throughout 2017 and beyond. We hope to see Sense Companion coming to some existing HTC phones too, and we’re told that’s something the company is looking into.

The HTC U Play and HTC U Ultra look like very interesting propositions, and in a way, give us a glimpse into what we can expect from rivals at the upcoming Mobile World Congress. AI assistants will most likely be a common feature across this year’s Android flagships so it’s ultimately down to who has the most compelling solution. It’s heavily rumoured that Samsung is also betting big on an AI assistant for the upcoming Galaxy S8, and we expect the same from other key smartphone makers as well.

As for HTC’s offering, we’re eager to test out the new Sense Companion to see just how smart it really is in the real world, and if having an AI assistant actually has any significant impact on our daily routine in the long run.