HTC’s U series marks a fresh start for the Taiwanese smartphone maker in 2017, with a new approach to design and aesthetics. The highlight here is the new ‘liquid surface’ treatment given to the chassis which, according to the company, mimics the surface tension of liquid. The end result is actually quite stunning as we found out in our review of the HTC U Ultra.

Today, we’ll be testing the HTC U Play – a smaller and more affordable model in the U series. HTC has never been particularly aggressive with the pricing of its premium offerings, so when we say affordable, it’s relative to the price of the U Ultra. Rs. 39,990 is still a big ask, especially considering that you can get Samsung’s brilliant Galaxy S7 (Review) for just a bit more.

So, is the U Play more than just a pretty face? Let’s find out.

Personally, we’re not fans of smartphones with huge screens since the borders tend to stretch the overall dimensions way too much (maybe the Samsung Galaxy S8 will change this?). So with a 5.2-inch display, we were happy to use the U Play as our daily driver.

HTC has created another gem of the smartphone as far as design and aesthetics are concerned. It looks stunning from pretty much any angle but is also nightmare to keep clean. Even though one-handed use is physically possible, the slippery glass back makes gripping this phone a challenge. We got the Bright Black version for review but HTC India’s online store shows three more colour options: Sapphire Blue, Snow and White, and Make-up Powder Pink. 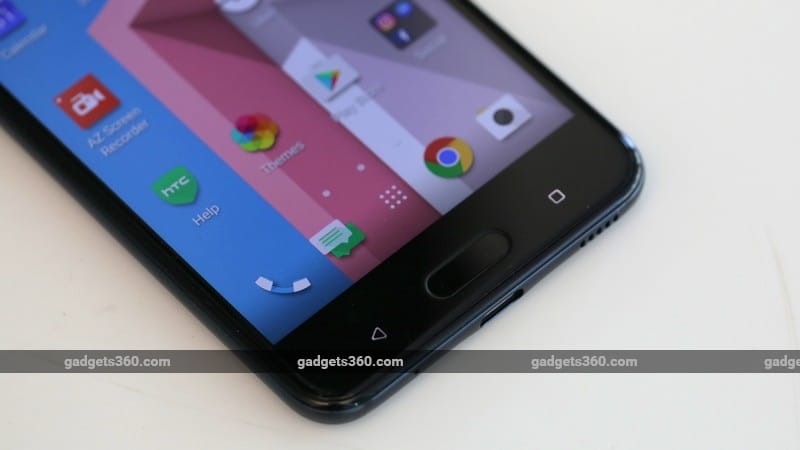 The 5.2-inch Super LCD display has Gorilla Glass protection and a full-HD resolution resulting in a pixel density of 428ppi. Brightness is excellent and so are the viewing angles. Colours have good saturation without looking too jarring. Colour temperature can be adjusted in the Settings app depending on your preference. While the display is sharp and vivid, we noticed a small degree of colour shift when tilting the phone vertically. There’s a notification LED above the screen and backlit Android navigation buttons flanking the home button, which has an integrated fingerprint sensor.

The U Play is fairly slim at 7.99mm and very light at just 145 grams. The metal sides offer good grip and we like how the glass blends seamlessly with the frame so you don’t feel any of the edges. We do feel the button placement could have better as the power and volume buttons are a bit higher than what we felt was a comfortable reach.

There’s a USB Type-C port on the bottom, and a mono speaker grille. The hybrid SIM slot is placed on the top. This phone can accommodate a microSD card of up to 2TB in capacity, at the cost of a second SIM. The rear camera creates a slight bump around the back but it’s not too obtrusive. Just like the U Ultra, this phone also lacks a 3.5mm headphone socket. 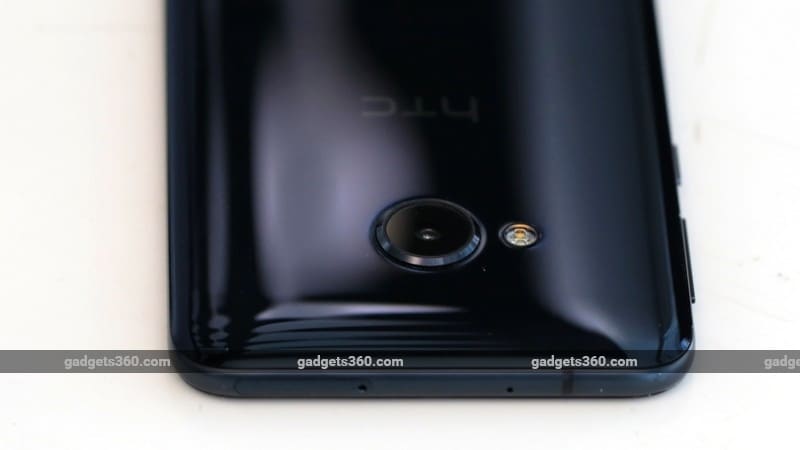 Overall, the U Play is much easier to manage than the U Ultra, while still maintaining most of its premium feel. In the retail box, you can expect a Type-C cable, a plastic case, a 10W power adapter, a SIM ejector tool, a microfibre cloth, and a USonic headset. Unfortunately, there’s no Type-C to 3.5mm adaptor in the box so you’ll either have to buy your own, stick to the bundled headset, or go wireless.

HTC U Play specifications and features

The HTC U Play is powered by an octa-core MediaTek Helio P10 SoC, and has 4GB of RAM and 64GB of storage. MediaTek is not a name that we generally associate with flagship-level products, and this is not a flagship-level SoC, so it's a bit puzzling that HTC decided to use it. To put things into perspective, the Moto M, which costs around Rs. 16,000, uses a faster Helio P15 compared to what’s in the U Play. Still, this processor is competent enough for day-to-day activities. In benchmarks, it is roughly 10-15 percent slower than a Qualcomm equivalent like the Snapdragon 625. In AnTuTu, we got 50,252 points while GFXbench returned around 18fps.

Other specifications include Bluetooth 4.2, dual-band Wi-Fi ac, NFC, USB-OTG, GPS, and GLONASS. There’s no FM radio. You do get support for 4G with VoLTE, and a suite of sensors including a gyroscope and a magnetic sensor. 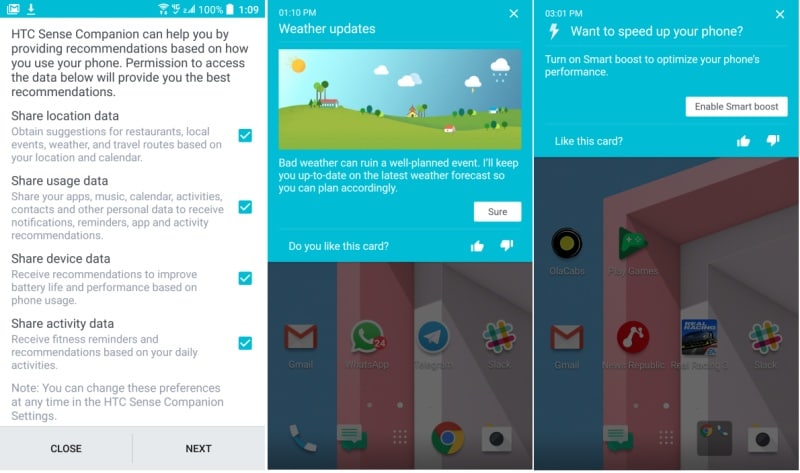 The U Play runs Android Marshmallow, which is another big question mark, considering that its bigger sibling is on Android Nougat. There’s also a stripped down version of HTC’s Sense UI which looks similar to what we saw on last year's HTC 10. There isn’t much bloatware as HTC has done away with most of its own apps in favour or Google’s suite of apps, so for example the gallery is replaced by the Photos app while Play Music handles audio duties.

You can access HTC's BlinkFeed news reader when you swipe right on the first homescreen, and there are a couple of preinstalled apps such as UnderArmor Record, Themes, and News Republic. HTC is banking on its new AI assistant called Sense Companion to set the U series apart from competitors. When we first set up the U Play, there was no indication of how to actually use this feature, and we weren't even sure it existed until we found the app.

Depending on what permissions you grant it like location, device, usage and activity data, it’s supposed to learn about your usage patterns and provide contextual information. Notifications show up in the form of bubbles on the homescreen, and the amount of time they stay there depends on how critical they are.

At a briefing at CES 2017, HTC told us that Sense Companion will only show critical updates, unlike Google Now which keeps throwing up cards as you move around. However, we didn’t get any real use out of Sense Companion during our review period. It did try to tell us what it can do once in a while - when gaming, we got one suggestion to use HTC's Boost+ app to free up resources, but there were never any location-based prompts. Perhaps one week isn’t enough time for it to learn enough to provide any useful suggestions.

Sense Companion is only currently available on HTC's two U series phones, but we don’t see any reason why it shouldn’t come to older HTC models as a software update. 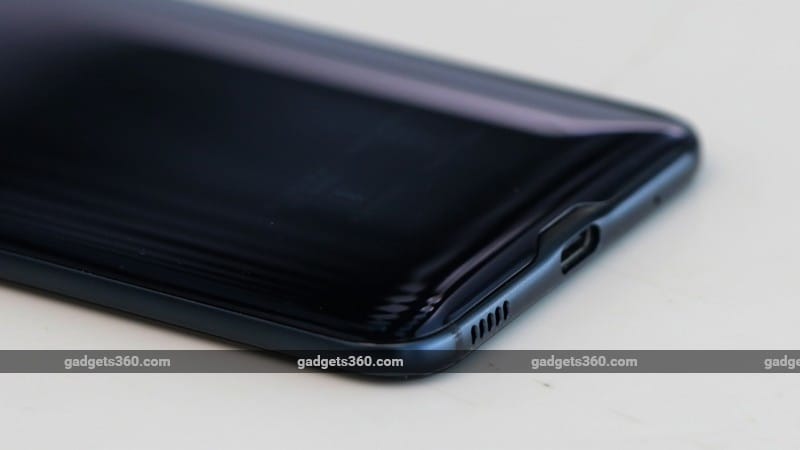 The lean software coupled with a good amount of RAM result in smooth system performance. The U Play handles multitasking pretty well and we never really felt that it was lacking enough power for common work and social apps. Games also ran pretty smoothly although the graphics settings for certain heavier games were dialled down a bit.

The upper rear of the phone heats up when charging or using the camera, but for general use, it isn't much of a problem. Call quality is good and the earpiece's volume level was fine even when we were in noisy places. The fingerprint sensor also works very well and is quick at authentication.

Media playback is not too bad, as the phone has no trouble with full-HD video files. All our high-bitrate ones played just fine. The phone cannot handle 4K videos mainly due to the limitations of its processor. The loudspeaker is okay for alerts but doesn’t provide the best experience for media files. The U Play ships with the Type-C USonic headset, which you can read about in detail in the performance section of our HTC U Ultra review.

Both cameras provide good all-round performance although we wish we had more video modes to play with like slow-motion. The 16-megapixel rear camera features PDAF and Optical Image Stabilisation (OIS) with an f/2.0 aperture that captures very good detail even when the light isn’t too favourable. In some of our test shots taken at dusk, distant text on objects was clearly visible. The Auto HDR feature helps bring out details in backlit scenes. The wide aperture also allows for good depth-of-field effects in close-up shots. Other shooting modes include Zoe camera, which shoots a still and three seconds of video; panorama; and a pro mode. Details are lacking in low-light landscapes but close-ups fare better. 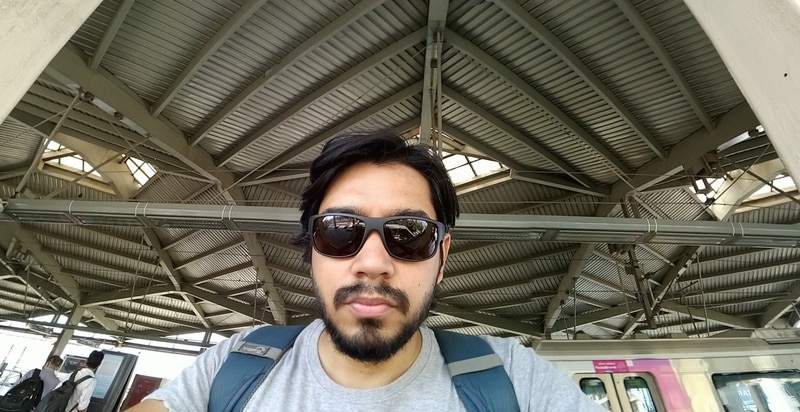 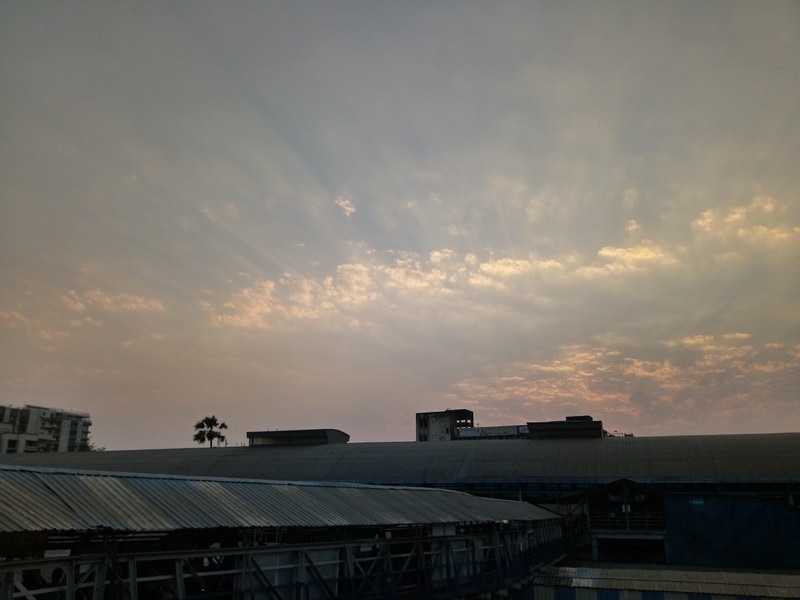 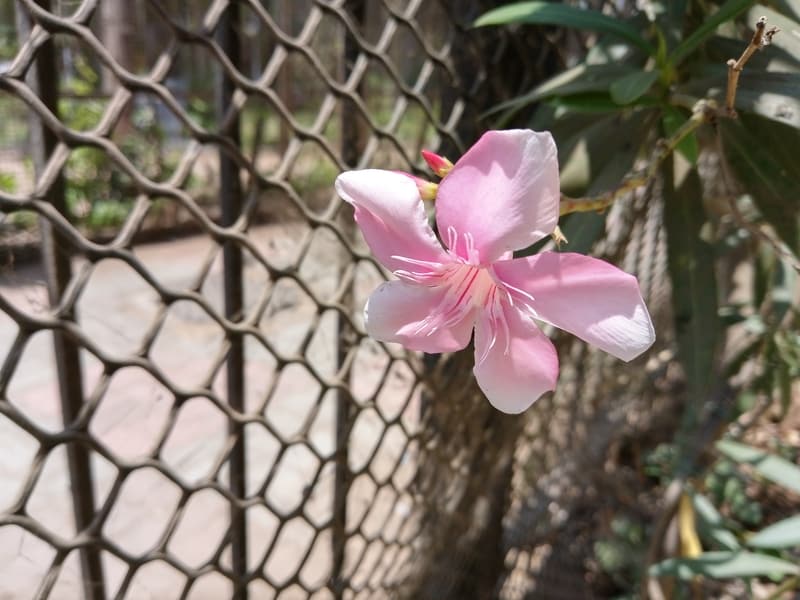 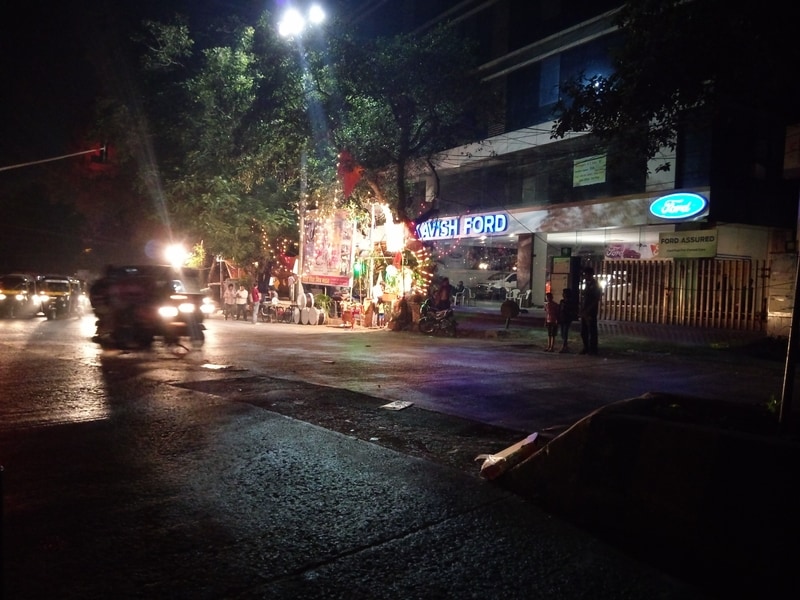 The quality of recorded video is good, but sadly there’s no option for 4K recording. The U Play gets a 16-megapixel, fixed-focus front camera with the same aperture as the rear one. Selfies came out looking very good, and you can capture a group of people with the selfie panorama mode. Video recording tops out at 1080p for the front camera as well, and you get features like a screen flash, timer, and smile- or voice-triggered capturing.

HTC has fitted the U Play with a pretty modest 2500mAh battery, but we still managed to get a decent runtime of 8 hours and 44 minutes in our HD video loop test. With regular use, we managed to make it through an entire day without a charge, which is not bad. The phone does support fast charging using the bundled 10W adapter. You also get HTC’s extreme power saving mode which gives you only basic calling and messaging functionality while shutting down most background connectivity features and processes. 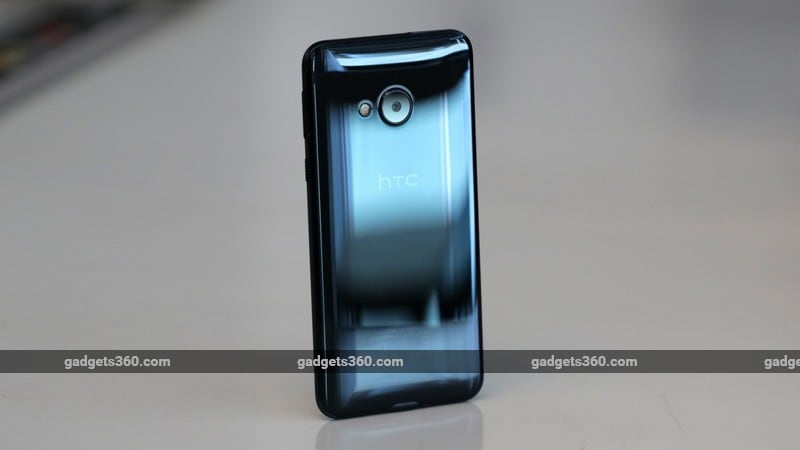 The HTC U Play is a neat little device with striking looks and smooth all-round performance. It has a good display, the cameras are very capable, and battery life is not too shabby for such a small body. The phone will be going on sale in the second week of April, according to HTC. We weren't able to get any definitive timeline for the rollout of an Android Nougat update, but it should be in the works.

The real kickers, though, are the price of this phone and the budget-class processor that HTC has used. Priced at Rs. 39,990, this phone is simply way too expensive to recommend. You can get a proper flagship like the Samsung Galaxy S7 for only a little bit more, or look at other options such as the Moto Z (Review).

Further reading: HTC, HTC U Play, HTC U Play review, HTC U Play performance, HTC U Play price, HTC U Play price in India
Roydon Cerejo Email Roydon Roydon Cerejo writes about smartphones and laptops for Gadgets 360, out of Mumbai. He is the Deputy Editor (Reviews) at Gadgets 360. He has frequently written about the smartphone and PC industry and also has an interest in photography. With over a decade of experience covering the consumer technology space, he is also an avid sci-fi movie and TV show geek and is always up for good horror flick. Roydon is available at roydon@gadgets360.com, so please send in your leads and tips. More
WhatsApp Privacy Policy Case Referred to Constitution Bench by Supreme Court
UK and Swedish Watchdogs Warn of International Cyber-Attack