Taiwanese manufacturer HTC may have skipped the Consumer Electronics Show this year, but it was certainly back with a bang for the Mobile World Congress. The company showcased three very important smartphones as part of its One series at the event - its flagship One X, mid-range One V and it's thinnest smartphone till date, the One S.

Despite being just 7.8mm thick, the HTC One S packs in some power. It comes with a 1.7GHz Qualcomm S3 processor and 1GB RAM. Will this sleek smartphone be able to catch the fancy of Indian consumers? We will find out in this review.

Hardware
The HTC One S is one of the few phones that grab your attention instantly. It looks fresh and quite different from HTC's yesteryear phones. The company seems to have put in quite a bit of thought in the making of this smartphone - the aluminium unibody shell is now much thinner and the speaker grills have been micro-drilled, similar to the One X.

The top and bottom parts of the back are still plastic and the top comes off to reveal the micro-SIM card slot. Similar to the One X, the battery of the device remains inaccessible.

Thanks to the not-so-huge 4.3-inch display and thin profile, the One S fits nicely in the hand and feels right.

Coming to the specifics, the sides of the One S are pretty clean apart from the Micro-USB port on the left and volume rocker on the right. The primary mic is present at the bottom, while the top houses the secondary mic, power button and 3.5mm headset jack.

Overall, the smartphone's industrial design is a nice departure from company's smartphones till now.

Display
The HTC One S features a 4.3-inch Super AMOLED display with qHD resolution (960x540), which might not be as crispy as an HD display but is definitely decent. It offers great viewing angles and rich colour reproduction. However, the AMOLED's blue tinge is also present on the phone.

While, the screen looks bright and vibrant, it has its own set of issues because of the underlying technology - Super AMOLED and the PenTile pixel arrangement that makes some colours look grainy on careful observation. 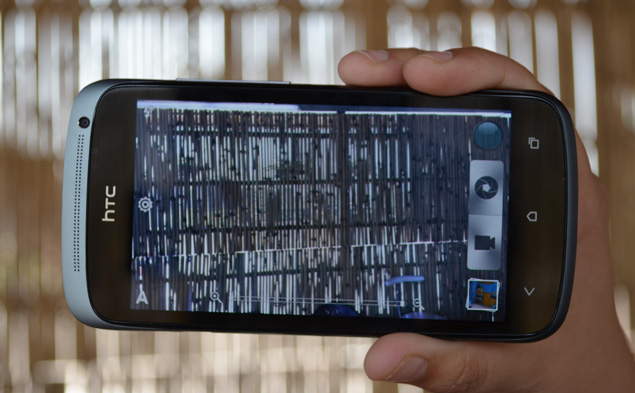 Camera
The smartphone shares the same camera system as the HTC One X, which performed very well in our review. The One S features the same 8MP sensor, with f/2.0 aperture coupled with dedicated ImageChip processor.

The camera is very responsive and provides a great imaging experience. You can capture both still and video concurrently and also choose from a varied range of filters available on the smartphone.

Similar to the One X, One S also features a revamped camera interface, which can be easily termed as the best camera UI available in an Android smartphone. To further sweeten the deal, it also comes with several manual settings like ISO, white balance and exposure level that you can play with.

The stills captured with One S are decent under good lighting conditions; however you will find noise and graininess in low-light shots. The One S supports 1080p video recording and the results were quite good in our testing. 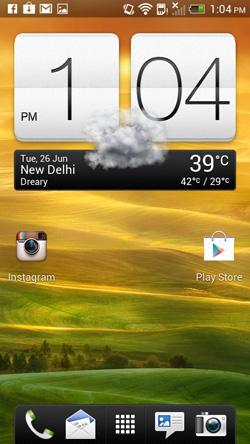 HTC was the first manufacturer to launch Ice Cream Sandwich smartphones in the country in the form of the One X and One V. Now, the One S also offers the goodness of Android 4.0 to users coupled with company's user interface Sense 4.0.

Thanks to Sense, you will hardly notice the stock ICS look anywhere on the phone, not that it is a good thing. Rather than going for a refreshing Android 4.0 interface, the company has decided to stick with its own UI, which has also been revamped and toned down compared to earlier versions.

Despite the company's noticeable efforts, Sense is still not an asset, but we are not completely disappointed with it either. Though Sense still hogs a lot of RAM, the 1GB RAM inside makes lags on the device hardly noticeable.

The updated Sense 4.0 also hosts less bloatware than previous versions and there are only a few apps pre-loaded on the smartphone. Some of them are actually pretty useful. The pre-installed apps include 7-digital (a music store), HTC Hub (app store), PDF Viewer, Polaris Office, SoundHound, TuneIn Radio, Stocks, FriendStream and Teeter (game).

Similar to other One series smartphones, the One S also comes with Dropbox integration and 25GB of free cloud space for two years. Along with all the Sense features, HTC One S also includes ICS features like Face Unlock, Resizable widgets, home-screen folders and swipe to dismiss notifications.

Performance/ Battery Life
When HTC announced the One S at the Mobile World Congress this year, the smartphone was said to be sporting the 1.5GHz Qualcomm S4 Krait processor. But due to a supply crunch, the company had to launch the One S with a generation old S3 processor in some markets. Unfortunately, India is one of those countries, where the One S features a 1.7GHz Qualcomm S3 processor.

It is the same processor present in smartphones like the HTC Sensation. However, real-life performance of the smartphone does not seem to have been impacted. The overall operation is still fluid and there is no lag whatsoever.

Whether you are opening image-heavy webpages or browsing through apps, you will notice no hiccups and the performance is at par with other smartphones in the similar price-bracket.

Coming to the battery performance, the 1650 mAh battery inside the smartphone provides enough juice to last through the day for moderate users; however photo enthusiasts and heavy users won't be so lucky. As the battery is not user-replaceable, any hopes for a larger battery are also ill-fated.

The call-quality, network reception and data connectivity, all were above average and gave no problems in our testing.

The device comes with 16GB of internal storage but unfortunately there is no option for expansion. The 25GB free Dropbox storage provided by the company is your only respite to store data.

Sporting a thin and attractive profile, a fairly decent processor and Android 4.0, HTC One S looks like an instant winner, but pricing is the main issue here. At Rs. 33,590, HTC One S is certainly over-priced. There is no HD display or quad-core processor here to justify such a high price.

The absence of the S4 processor from the Indian version is also going to hurt the One S, as it is likely to delay future software updates, as the company will now be releasing two different update builds, one targeted for the S4 version while the other for the S3 version.

At the end, it all comes down to whether you are willing to spend extra cash for the killer looks and a slightly overclocked processor or would you rather like to shell out much less and settle for the Samsung Galaxy S II, which has similar features.

Visit our picture gallery to see more images of HTC One S.