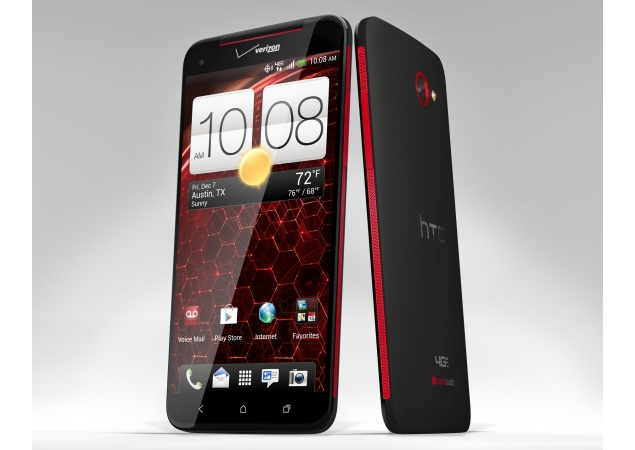 Over the past few years, smartphones have gradually gotten bigger and tablet computers have gotten smaller. So it should come as no surprise that devices in between are starting to emerge.

These Android devices, informally known as phablets, are better described as giant phones than baby tablets, as they can be used for phone calls. And for now, they aren't much bigger than regular phones.

The larger screens - measuring 5 inches or more diagonally make the devices slightly better for watching movies, reading books and consuming other media. They can also make the phones bulkier to carry - or so I thought.

I was pleasantly surprised when I took HTC Corp.'s new 5-inch Droid DNA phone out of the box. The DNA looks about the same size as my 4.8-inch Samsung Galaxy S III, one of the largest and most popular phones out there. I had to find a ruler to make sure I wasn't sent the wrong phone.

HTC succeeds by making the DNA taller rather than wider, which is important because the width is what spans your palm when you're holding it. Samsung Electronics Co.'s 5.5-inch Galaxy Note II feels too big in my hands - more on that later.

I didn't believe I'd notice the small increase in screen size until I watched "Ice Age" on both the DNA and the S III side by side. But the difference is small. Although watching a movie on a DNA beats doing it on the older iPhone's 3.5-inch screen or even the 4 inches on the new iPhone 5, it isn't the same as watching it on a 7-inch or 10-inch tablet computer. Get a real tablet if size matters to you.

In most apps, I don't actually get more content with the bigger screen. Text and graphics in Gmail messages simply get slightly bigger on the DNA. Google's maps are larger, but that doesn't mean you see more surrounding area, just bigger parks and road names. Amazon's Kindle app squeezes in an extra word in a line here and there, but you lose those gains once you reach the next paragraph.

The exceptions I spotted
Google's Play Books app for reading e-books
The text appears about the same size on the DNA and the S III, meaning the app can fit a few more lines on the DNA device.

Facebook
The app shows a tad more on the DNA when placed on its side like a movie screen. Side by side, it could mean seeing a bit more of a photo on the DNA, but it's not enough to fit in an extra post from someone whining about a morning commute - you'd have to scroll down for more status updates like that. Strangely, I get less on the DNA when using Facebook with the phone held like a skyscraper. A black horizontal bar serves as a menu for settings and other tasks; on the S III, that menu button is built into the hardware and doesn't take up screen space.

Because the DNA's screen is only slightly bigger than the S III's, I can see why I'm not getting more content, just larger text, images and video. I figure I'd need the Note and its even larger screen to get all that. After all, on a tablet's 7-inch or 10-inch screen, I'm seeing much more, not just everything bigger.

But in my tests, everything just gets bigger on the Note compared with the S III. I'm seeing the same number of emails, the same coverage area for maps and the same amount of text for e-books. Think of it as moving a movie projector back so that the movie projects onto a larger area. You're not actually improving the quality or the size of the source material, the film. And if you move back far enough, what's shown on the screen starts to degrade.

I see that degradation watching "Ice Age." The video just isn't as sharp on the Note.

I soon discovered the reason: The S III and the Note both have the same number of pixels, those tiny dots that collectively form text and images on a screen. Both displays are 1,280 by 720 pixels, which translate to 306 pixels per inch on the S III and 267 on the Note II. So the Note simply stretches the same amount of display information onto a wider area. That's a shame, as it negates much of the benefits of a larger screen.

That said, both Samsung phones have richer colors than the DNA, thanks to a screen that uses organic light-emitting diodes, rather than a standard LCD. Although video on the DNA is sharper, color isn't as vivid as it is on the S III or the Note. Still, the DNA's screen trumps that of many other phones, and video looks great if you're not watching a movie next to a Samsung phone.

Available from Verizon Wireless for $200 with a two-year service agreement, the DNA also has a front-facing, videoconferencing camera that's among the best, at 2.1 megapixels. Its rear camera, for taking photos and video, matches the 8 megapixels that other major phones have. Sound comes out well thanks to the DNA's use of Dr. Dre's Beats Audio.

As for the Note, it has a fine-tip stylus that can be used to add a handwritten signature to an email, circle an important event on your calendar or doodle on a virtual notepad. The on-screen keyboard has an extra row for numerals, so you don't have to keep toggling between letters and numbers when writing messages or entering passwords. The Note is available from a variety of carriers starting at $300 with a two-year contract.

Both are decent phones, but not for their distinguishing feature - the size. The increase in size is barely noticeable on the DNA and annoying on the Note, which feels even bulkier with a built-in cover. It keeps bouncing in my pocket when I'm running, then feels as if it would slip out of my hands once I take it out. Checking voice mail feels awkward. The Note is also one-third heavier than the S III.

Here's a case of trying to be too much. A phone is a phone and shouldn't try to grow into a tablet. After all, you don't see too many people hold up an iPad to their ears to make phone calls, even though you could with Skype and other calling apps.

With the Note in particular, you get the annoyances of a tablet (something too big to easily carry around) and little of the benefits (fitting more content on the screen). Get the Note for the stylus, but not for the screen. Likewise, the DNA doesn't offer much in terms of screen size beyond other phones out there. Get the DNA for its sound quality or screen resolution, but not for the size of the display.

There are sure to be bigger phones to come, and I hope they will offer more than just content shown bigger. App developers may have to do their part by designing their programs for varying screen sizes. Both the DNA and the Note have good features that set them apart from rivals, but size isn't one of them.