In what could be considered a comeback of sorts, thanks to good sales of the Desire 816 and the One (M8), HTC is following Samsung's footsteps by announcing new phones left, right and centre. Recently, the company announced the HTC Desire 816G, which is supposedly a 3G-only variant of the Desire 816 with watered-down specifications. We loved the Desire 816 for its great 13-megapixel camera and its media playback capabilities. Let's hope that the Taiwanese smartphone company can recreate the same magic with the new Desire 816G. 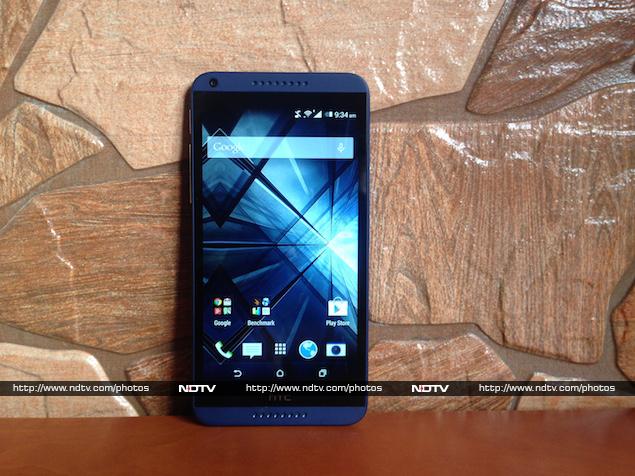 Look and feel
The HTC Desire 816G is identical to the Desire 816 (Review | Pictures) except that the former is 7g lighter at 158g and a negligible 0.1mm thicker than its elder brother. The design issues we had with the Desire 816 persists with the Desire 816G, for example, the dual-tone finish (matte and gloss) is still an eyesore. The glossy rear is a fingerprint magnet and it scratches very easily. While these scratches were clearly visible on our navy blue variant, the white variant should be able to mask them better. 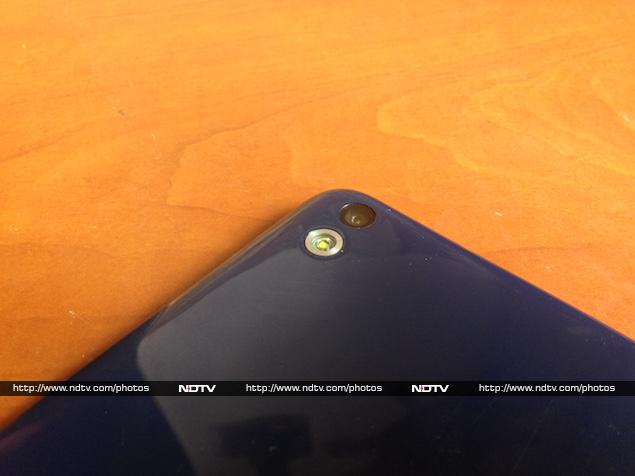 A large 5.5-inch screen takes up most of the front of the device and there are thick bezels around it. The BoomSound speakers are present above and below the screen. On the top is the front-facing camera. HTC uses on-screen buttons for navigating through the operating system. The Micro-USB port is on the bottom while the 3.5mm audio jack can  be found on top. HTC continues to place the volume rocker and power button on the top of the left edge of the Desire 816G. We feel that ergonomically, by virtue of its placement, left-handed users will find it easier to handle. A flap on the right opens up to reveal the two Nano-SIM card slots and a slot for the microSD card. The primary camera sits on the top right corner of the rear and below it is the flash module.

Specifications and software
HTC has decided to go with a MediaTek 6582 quad-core chipset clocked at 1.3GHz per core with integrated Mali-400MP graphics. The phone also has 1GB of RAM and 8GB of storage space. Apart from this, microSD cards of up to 32GB can be used.

As we mentioned before, the Desire 816G is a 3G-only device, but only the primary SIM card can connect to a 3G network. With respect to the other connectivity options, there is Bluetooth v4.0 and Wi-Fi a/b/g/n as well. There is a 13-megapixel primary camera and a 5-megapixel front-facing camera. Both these shooters can capture 1080p videos. Providing the juice for the phone is a 2600mAh battery.

The 5.5-inch screen has a resolution of 720x1280 which translates to a pixel density of approximately 267ppi. The panel is of the relatively old S-LCD2 type, and while it does display crisp visuals, viewing angles are not too great. We noticed that the screen desaturated quite a bit even if we tilted the screen a little. Sunlight legibility on the other hand pretty good. 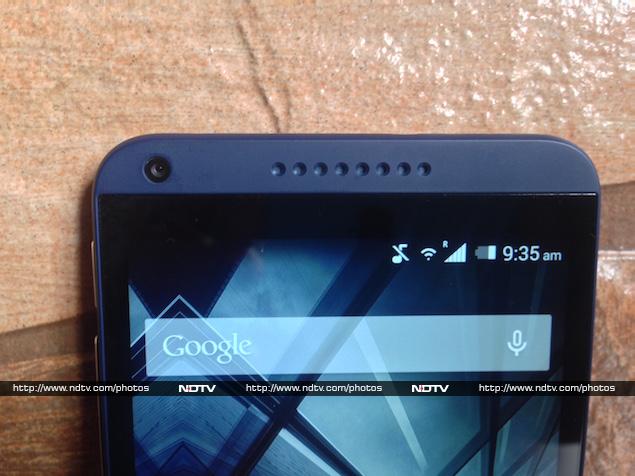 The phone runs Android 4.4.2 with HTC's much older Sense UI 5.0 slapped on top of it. We've explored this at length in our review of the HTC One (M7). The implementation is not too different in the HTC Desire 816G except for the use of a different camera app. All said and done, we would have ideally expected HTC to ship one of its new products with the latest skin.

Camera
We had loved the camera app on the HTC Desire 816 and the options it presented. Unfortunately, HTC has decided to go with a crude camera app from Gingerbread days, which is super clunky to use. Smartphone manufacturers should absolutely stay away from using this app for their phones, and users will benefit from downloading a third-party alternative. 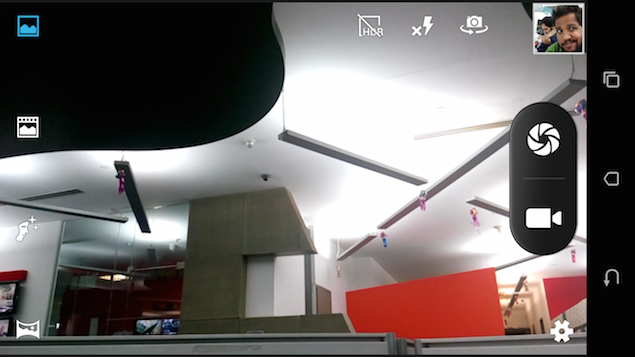 Adding to the woe is that the lens is slow to focus and shoot images, and it gets even worse in low-light situations. We always ended up with blurred images. It would have been fine if the shutter had actually opened long enough to let in more light and capture crisp images, but no; shots we captured in low-light situations were not at all impressive.

Thankfully, we'd kept our expectations in check. In fact, the 13-megapixel camera is not a patch on the one in the Desire 816. Daylight shots had some noise and lost out on certain details. Also, while colours looked natural, we found chromatic aberration in some spots. 1080p videos that we captured looked fine. The 5-megapixel front camera doesn't have a wide field of view but can capture some decent self-portraits provided the light is adequate. 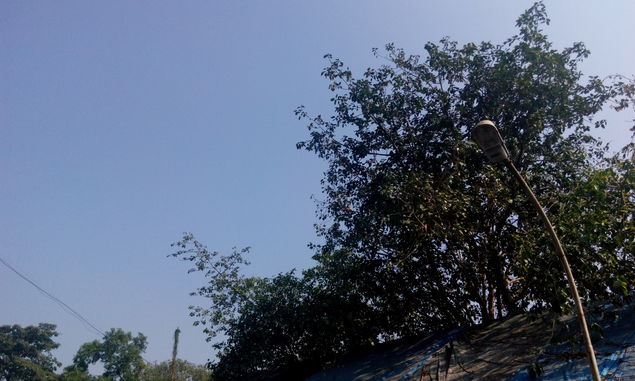 Performance
The Mediatek SoC used in the HTC Desire 816G can also be found in much cheaper phones such as the Huawei Honor Holly (Review | Pictures). This processor is meant for lower end phones but we were pleasantly surprised to see how HTC has managed to optimise its performance. We didn't notice any lags and the performance of other phones with the same hardware pales in comparison. Taps and swipes registered with gusto, apps opened fairly quickly, and scrolling through web pages was a breeze.

Casual games run fine on the phone but don't expect it to play high-end games smoothly. This was corroborated by the GFXbench and 3D Mark Ice Storm scores of 7.3fps and 3,143 respectively. The more CPU-bound AnTuTu and Quadrant returned scores of 17,501 and 6,926 respectively, which are not too great. 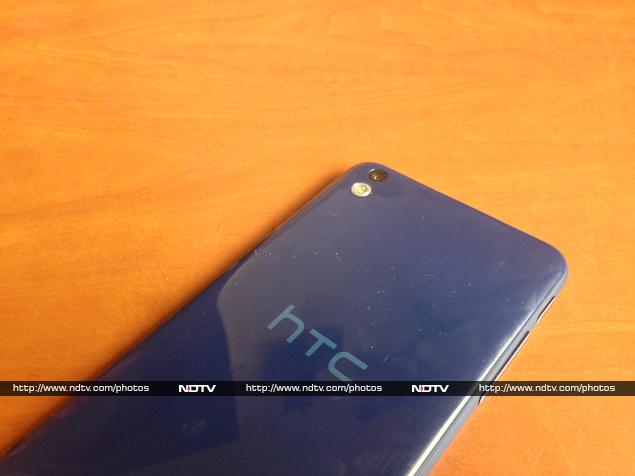 The Desire 816G managed to play all the videos we tried; this included a 1080p video encoded at 40mbps. HTC claims that the Desire 816G has BoomSound but it is not as good as the implementation we saw on the HTC One Max (Review) or the HTC One (M8). Stereo separation is good but the overall sound is tinny. Moreover, it doesn't get very loud.

Our review unit didn't have the headset HTC usually bundles with its retail packages, but we tested the sound with our reference headphones and it was pretty good. As is with most HTC phones, the sound quality in calls was really good and we cant really find a fault with it. In our intensive battery test, the phone lasted 6 hours, 15 minutes, which is fairly okay. However, we did notice that the Desire 816G's battery doesn't lose too much power when the device is in standby.

Verdict
HTC had priced the phone at Rs. 18,990 at its launch (which wasn't too long ago), but it is already available at a discounted price of around Rs. 17,000. We think even this asking price is a little on the high side. This device takes the really good formula of the HTC Desire 816 - big screen, decent specifications and a great camera - and reduces it to something we really cannot be as enthusiastic about. Why would anyone want to buy the Desire 816G? We really don't have an answer.

The newly launched Lenovo Vibe X2 and the Huawei Honor 6 (Review | Pictures) are much better phones in the same price range, and we'd suggest looking at those instead. 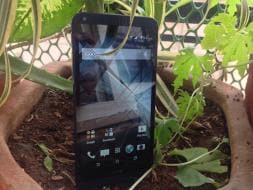