HTC was one of the first to enter the smartphone race, but this Taiwanese company has not had it easy over the years. Recently, part of the company - including some of its top engineers - was acquired by Google to work on its Pixel smartphones. Even after this transition, we are seeing good devices such as the HTC U11+ (Review). HTC has now launched a mid-range smartphone called the Desire 12+ in India, priced at Rs. 19,790. It follows the ongoing trend of 18:9 displays and has dual rear cameras. Does it have the overall performance to justify its price tag? We find out.

Take a look at the Desire 12+ and you know it's an HTC smartphone, since it carries the family look. The design is simple and in line with what you would expect from most smartphones nowadays. HTC says that it has an acrylic glass back surface, but it feels quite plasticky to the touch. This is a little surprising since many phones in this price range use more premium materials such as glass and metal. The back does pick up smudges easily and you will need to wipe it often to keep it clean. During our review period, we also saw it picking up fine scratches.

The Desire 12+ sports a 6-inch display with an 18:9 aspect ratio, making the phone tall and narrow. It has a metallic earpiece, selfie camera, and notification LED above the display. The phone isn't too thick and is comfortable to hold in the hand. It weighs 157g and is 8.4mm in thickness. The buttons are positioned on the right, but higher than where we would like them. HTC has two colour options for the Desire 12+ in India: Warm Silver and Cool Black. We got the Cool Black version for review, and it looks more blue than black depending on the light. 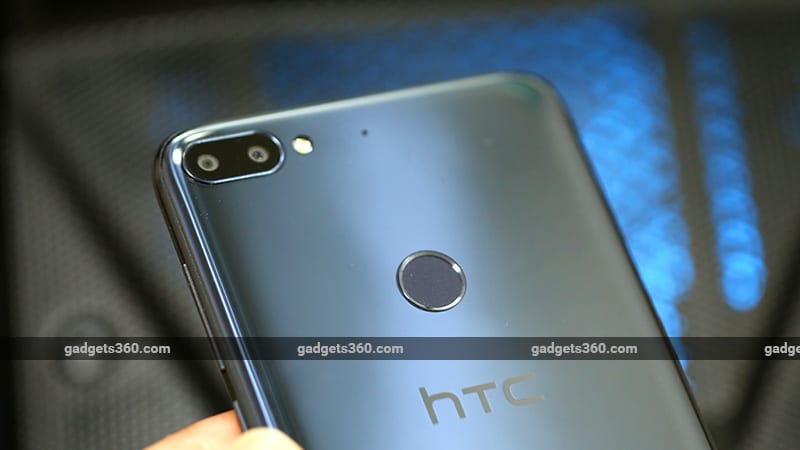 This phone has a dual camera setup at the back, placed horizontally, along with a single-LED flash and a fingerprint sensor. The Desire 12+ has a Micro-USB port at the bottom along with a 3.5mm headphone socket and a loudspeaker. The left side of the phone has the SIM tray which has dual Nano-SIM slots and a dedicated microSD card slot.

The HTC Desire 12+ is a bit of a disappointment when you look at the spec sheet. It is powered by the Qualcomm Snapdragon 450 SoC clocked at 1.8GHz. This is the same octa-core processor found in the Xiaomi Redmi 5 (Review) which costs half as much as this phone. We would have liked a Snapdragon 600-series processor at this price level. The 6-inch HD+ display on the Desire 12+ is also surprising considering that most phones even at lower prices offer full-HD+. Viewing angles are decent on the phone and it gets bright enough to be viewable under sunlight. HTC gives you the option to tweak the colour temperature of the display.

There is 3GB of RAM and 32GB of storage, of which you get 23GB for your data. You can expand storage by using the microSD card slot, and this phone can handle cards of up to 2TB. The dual camera setup on the back consists of a 13-megapixel primary sensor with PDAF and an f/2.2 aperture, along with a 2-megapixel depth sensor. There is an 8-megapixel selfie camera with a selfie light as well. Powering the phone is a 2965mAh battery, and you get a standard 5V, 1.5A charger in the box. Connectivity options on the HTC Desire 12+ include Bluetooth 4.2, Wi-Fi 802.11 b/g/n, GPS, and GLONASS. It is a dual-SIM device with support for 4G and VoLTE, but we found that either SIM can use 4G at a time but the other one will be restricted to 2G and 3G only.

In terms of software, the Desire 12+ runs on HTC's Sense UI on top of Android 8.0 Oreo. Swipe right from the home screen and you are greeted by BlinkFeed, which displays the latest news based on the sources you choose. You can also add social media sources such as Facebook and Twitter to see your feeds directly in BlinkFeed. The UI isn't drastically different from stock Android.

A lot of third-party apps are preinstalled on the phone, including Facebook, Messenger, Instagram, News Republic, and TouchPal. We couldn't uninstall all of this bloatware from our review unit. You can customise the look of your phone using the Themes app. HTC's Sense Companion provides custom reminders and suggestions based on your device usage and location. If it has a new suggestion, it also shows a floating icon for you to tap and interact with it. During our review, it did not offer any meaningful suggestions, but it might learn your usage patters over a longer period.

The Snapdragon 450 performs decently in the HTC Desire 12+. While navigation was smooth, we did have to deal with longer load times in a few apps. If your usage is limited to calls and using WhatsApp, you might not be bothered, but if you play games, the loading times can get a little annoying. While Clash Royale ran without any issues, we did see some stuttering and choppy frames while playing Hitman Sniper. We also observed slightly heavier battery drain while playing 3D games.

We ran our standard set of benchmarks to see how the HTC Desire 12+ fares against other devices in its price band. In AnTuTu, it managed to clock 70,680 points, similar to what the Moto G6 (Review) and Samsung Galaxy A6+ (Review) scored. Both are also powered by the same processor. We got 759 and 3,704 points in the single-core and multi-core tests in Geekbench 4 respectively. The phone managed 33fps in GFXBench T-Rex, and 809 in 3DMark Slingshot.

The camera app on the HTC Desire 12+ is basic and fairly easy to use. It has quick toggles for mode selection, beautification, filters, and Bokeh mode. We did not like the two-step process to change flash settings, and would have preferred a quick toggle instead. The Desire 12+ is quick to focus and adjust exposure based on available lighting. It has a Ubifocus mode which takes five shots at one time, giving you the option to refocus afterwards. You also get HDR, Portrait, Sports, Landscape, and other modes to choose from.

Photos taken with the Desire 12+ were average at best. You will need to enable HDR manually since it lacks auto detection. In daylight, we found that the camera was quick to focus and got the exposure right most of the time, but we noticed a loss in detail zooming in to the image. The Bokeh mode is easy to enable and has good edge detection. We encountered a bug which caused the phone to not save photos shot in this mode, but a quick restart fixed it for us. Macros are decent, but it isn't easy to get the phone to lock focus when you want it to. We also tried shooting in Flower mode and found that autofocus refused to work. 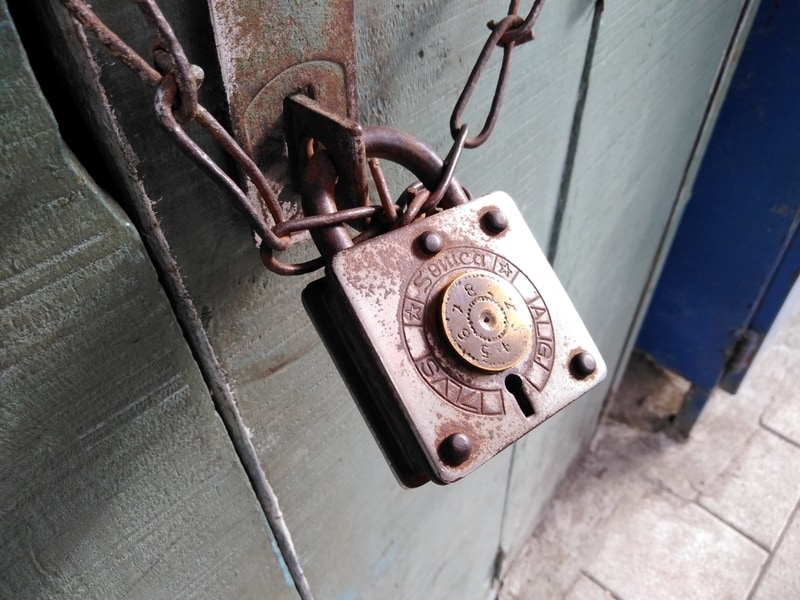 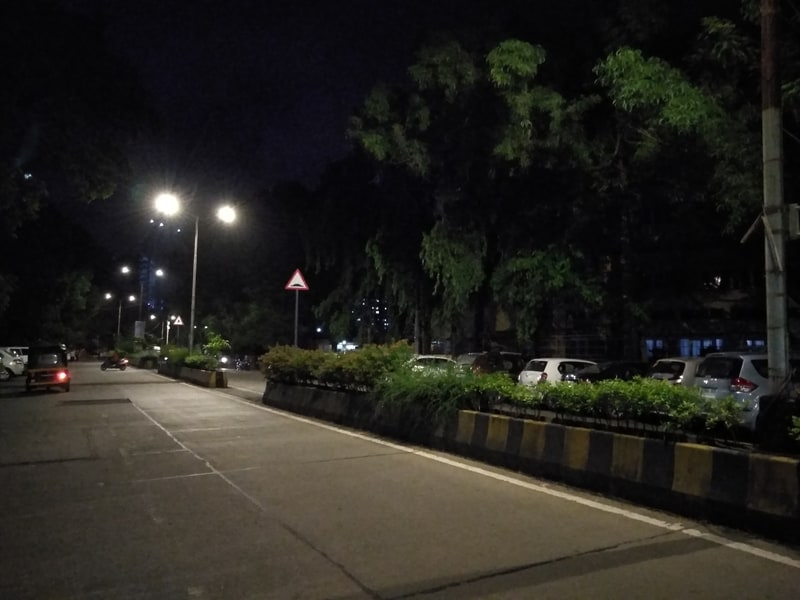 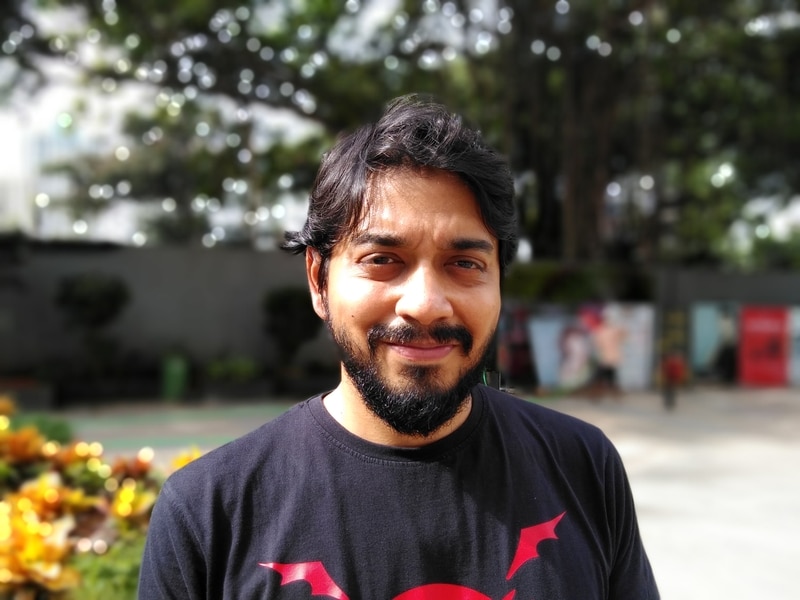 Low-light camera performance isn't great either. Again, shots look decent on the phone's screen, but zooming in reveals a loss in details. Photos taken with a light source at a distance appeared quite grainy. The Desire 12+ has a selfie flash which is helpful in low light. Selfies are good enough to be shared on messaging apps, but they aren't as good as ones taken by the likes of Xiaomi Redmi Y2 (Review).

Video recording maxes out at 1080p for both the front and the rear cameras. There is continuous autofocus but it isn't as quick as some of other phones we've tested recently. EIS is supported but we did not see any significant difference in clips recorded with it enabled.

In our HD video loop test, the phone went on for 9 hours and 43 minutes, which is below our expectations. With light usage, like WhatsApp and a Gmail account set up on the phone while we used it through the day, we found that it could last till the next morning. The supplied charger is rated at 7.5W and needs close to two hours to charge the device to 100 percent.

Verdict
HTC's Desire 12+ is the latest smartphone offering from the company in the mid-range segment, but we feel that its asking price is too high for what it offers. The Qualcomm Snapdragon 450 SoC is available in significantly cheaper phones such as the Xiaomi Redmi 5 and Oppo A71 (2018). The HD+ display is disappointing. If you are in the market for a smartphone with a budget of around Rs 20,000, you might want to choose between the Redmi Note 5 Pro (Review), the Moto X4 (Review), and the Oppo F7 (Review) instead.