You can get some great phones for Rs. 15,000 today, but if your budget is even just a little less than that, you don't have to compromise much at all. Competition is so stiff right now that manufacturers are pushing out multiple models and variants of those models all priced between Rs. 10,000 and Rs. 15,000, which means you have lots of choices. Amongst our top picks in this range are several very similar models from Xiaomi, Samsung and Lenovo.

Honor, Huawei's youth-focused brand, is making a fresh play in this segment with its new Honor Holly 4 and Holly 4 Plus, priced at Rs. 11,999 and Rs. 13,999 respectively. Both phones are fairly similar, and we have the lower end of the two in for review today. We're going to take a look at the Honor Holly 4 to tell you if it's good enough to unseat the biggest players.

In terms of design, there really isn't anything new or out of the ordinary about the Holly 4. It looks pretty nondescript and won't stand out in a group of similarly priced devices. Despite Honor's liberal use of the words "metal" and "metallic" in its descriptions of this phone, the body is largely plastic with only a metal plate on the rear. This phone should be relatively compact thanks to its 5-inch screen, but there's still a lot of plastic on the front face. There are no physical or capacitive buttons below the screen, so there's nothing but a silver Honor logo filling that space which actually calls more attention to it.

The rear has a matte finish and rounded edges which are both great for grip. At 144g and measuring 8.2mm thick, it's fairly easy to use this phone with one hand. The camera protrudes very slightly, and right below it is the fingerprint sensor which is always within easy reach. The phone's power and volume buttons are on the right, and are also conveniently located. There's a hybrid dual-SIM tray on the left, so you'll have to choose between a microSD card and a second SIM. You'll find a 3.5mm audio socket on the top and a Micro-USB port on the bottom. There are also two grilles on the bottom, though only one of them is actually a speaker.

The phone has been launched in grey, silver, and gold, and we had a gold unit for review. Honor didn't send us a full retail package, so we can't comment on the box contents. 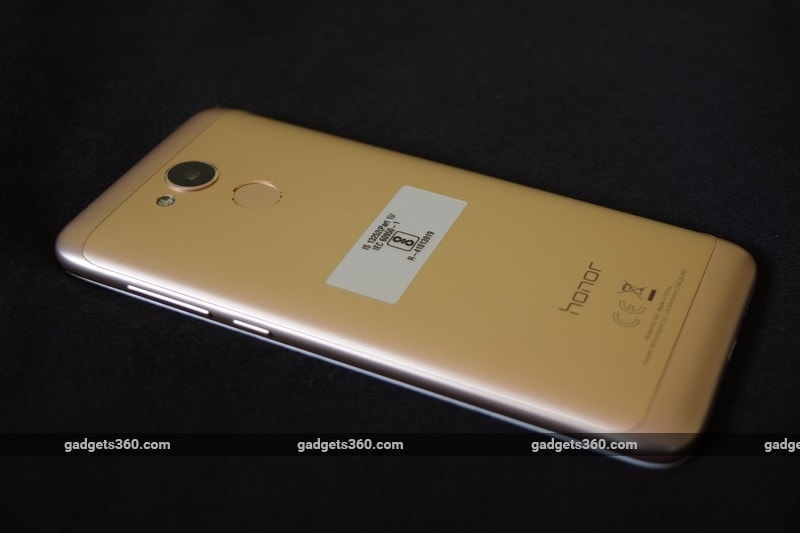 When it comes to low-cost phones, every manufacturer tries to one-up the others by pushing better specifications in at each price level. The Honor Holly 4 falls a bit short in this respect, with its Qualcomm Snapdragon 430 SoC, 3GB of RAM, and 32GB of storage. At this price level, Xiaomi offers its Redmi Note 4 (Review) with a Snapdragon 625 processor, 4GB of RAM, and 64GB of storage, not to mention its 5.5-inch full-HD screen. In comparison, the Honor Holly 4 feels like it's one step behind across every major parameter.

Even so, the hardware on offer is still quite respectable. The Snapdragon 430 SoC has four CPU cores running at 1.1GHz and another four at 1.4GHz, plus integrated Adreno 505 graphics. Oddly, although the SoC supports Wi-Fi ac, Honor only claims support for the older, slower Wi-Fi b/g/n standards. You also get Bluetooth 4.1, FM radio, GPS, a 3020mAh battery, 13-megapixel rear camera with flash, and 5-megapixel front camera. There are no extra niceties such as fast charging, a front flash, or in fact anything distinct that might make buyers choose this phone over an otherwise more powerful one.

On the software side, we have Huawei's EmotionUI skin, also known as EMUI. Like most other Chinese phonemakers, Huawei believes that it needs to drastically overhaul Android in order to provide value. Sure enough, there are loads of customisations. You'll notice that by default, the lockscreen wallpaper changes each time the phone wakes from sleep - there's even a little control panel that you can use to pause the slideshow. There's also a step counter right above the clock. Once you unlock the phone you'll see a single-layer UI with all app icons spread across the homescreens, but you can switch to a two-layer UI with an app drawer from within the Settings app. There are also options for making the icon grid denser, and swapping the order of the on-screen Android navigation buttons.

Honor allows gestures to be performed using the fingerprint sensor, so you can do things like stopping an alarm and scrolling between photos with your index finger. Other features include the ability to lock apps and files with a fingerprint or passcode. For some reason, there's a virus scanner tool baked into the Settings app as well.

There's a Themes app but there's only one font and icon set, so all you can really do with it is change the wallpaper. The Phone Manager app has the usual RAM cleanup tool and data traffic stats, plus links to assorted sections within the Settings app. Health shows steps taken and stairs climbed, and can log runs if you trigger it manually. It can show heart rate and sleep information from a paired fitness tracker, but isn't very functional beyond that. 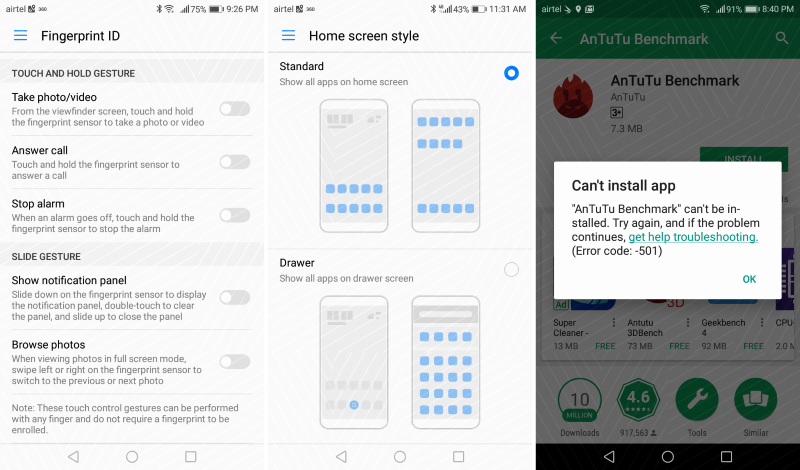 You won't have any problems with the Honor Holly 4 if you don't do much more than making calls, sending messages and using social media apps. It isn't the most responsive, and we did feel minor hiccups when switching between apps or just generally moving around the UI. This is more likely to be because of EMUI's animations than any fault of the hardware. We didn't have trouble playing Dead Trigger 2, but the metal backplate did start to feel warm within just a few minutes.

The default Swiftkey keyboard lets you swipe to type, and there are loads of options including colour themes that you can create out of your own photos, detailed statistics, and a clipboard of its own that can remember multiple clips for later retrieval. We found it far too bloated and it was sometimes sluggish.

The screen is bright enough to be useful even under sunlight. Colours aren't the most vivid, but the screen is decent overall and we were able to enjoy games and videos just fine. The single speaker can get pretty loud without distortion, but sound isn't very rich or deep.

The Honor Holly 4 refused to let us install several of our usual benchmark apps, most notably AnTuTu, Geekbench, GFXBench and PCMark. All other apps were perfectly fine, but we got an "Error 501" in the Google Play store with these specific ones, and no amount of troubleshooting could fix it. This is a problem that has been reported with previous Honor devices. We were able to run 3DMark, and got 5,846 in the Ice Storm Extreme test, which isn't great. Quadrant returned an overall score of 12,687. We also ran the browser-based Optane and Basemark Web tests, and got scores of 3,049 and 64.42 respectively. 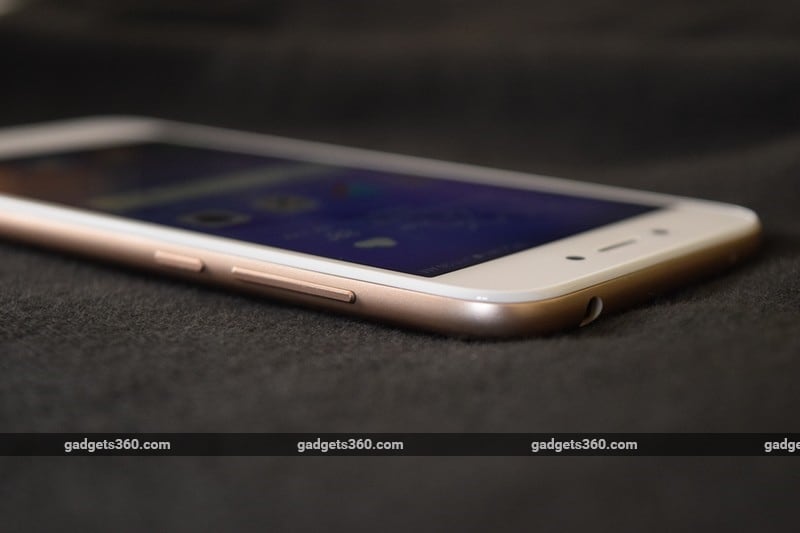 The Camera app on the Honor Holly 4 offers multiple modes including Pro Photo, Pro Video, Slow-mo, and Document Scan. You also get a few filters and a now-obligatory beautification slider. All settings are easily available if you swipe to the left. One nice touch is that you can double-press the volume down button when the phone is in standby to launch the camera app and immediately take a photo. There's even a little overlay that tells you how long it took to capture a shot - usually between 1.2 and 1.8 seconds.

When it comes to image quality, we found that photos taken in daylight lacked detail and exposure was sometimes blown out in frames with light and dark areas. The borders of objects were not very well defined, and textures didn't come through very well. At night, a lot depended on the amount of light available. In some shots, we could barely discern simple objects, but others came out decent enough to look good on the phone's screen. All photos looked okay as long as we didn't examine them at full resolution. 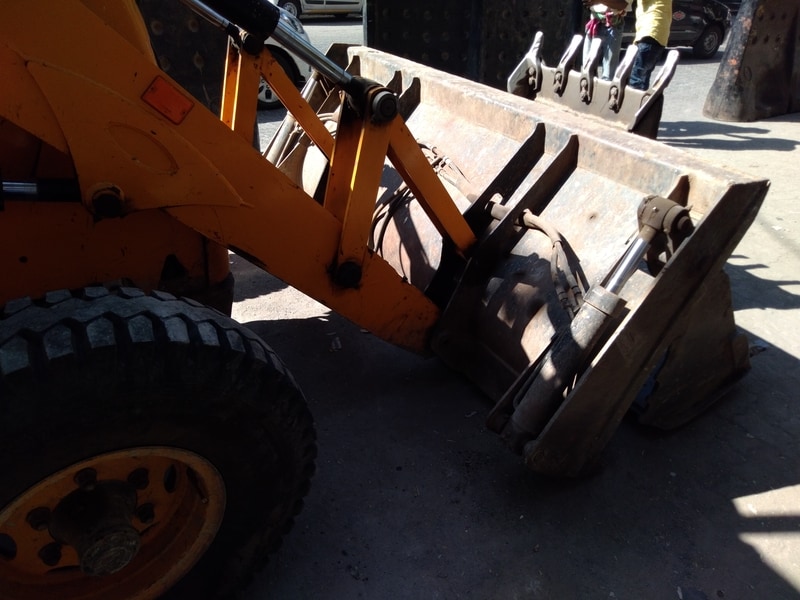 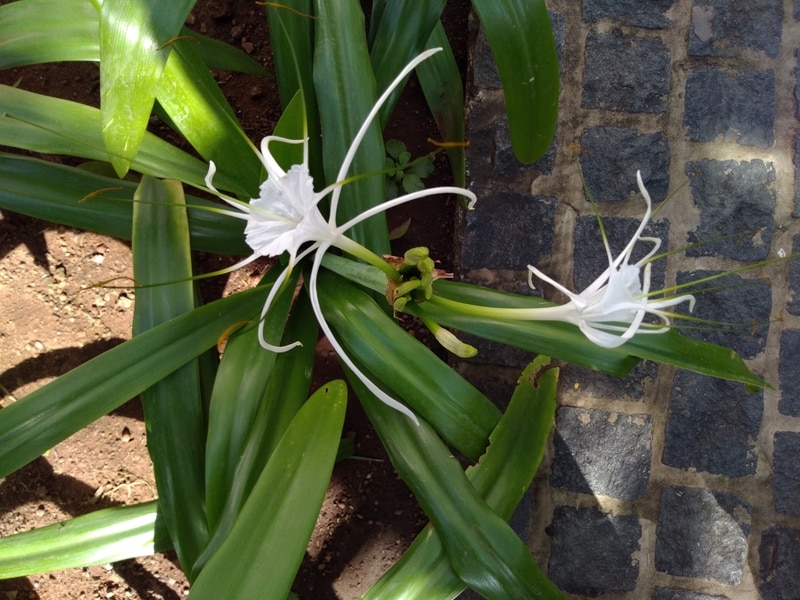 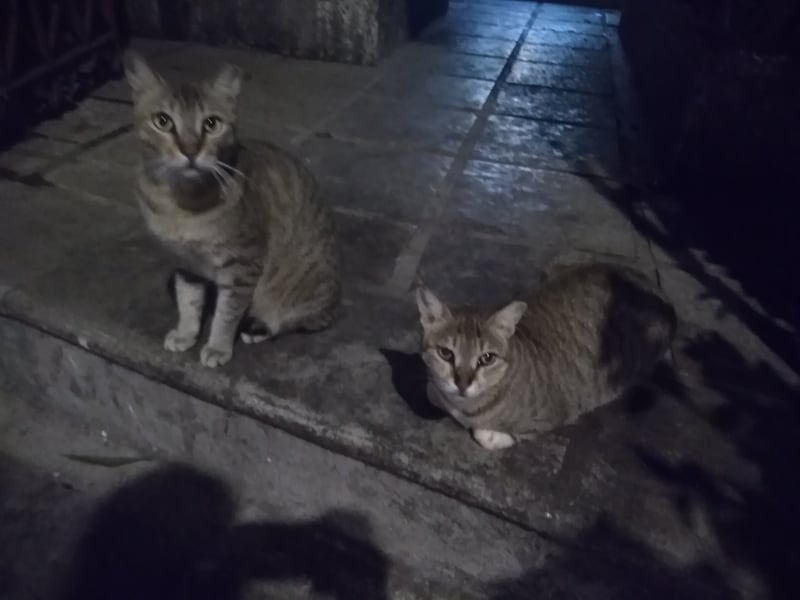 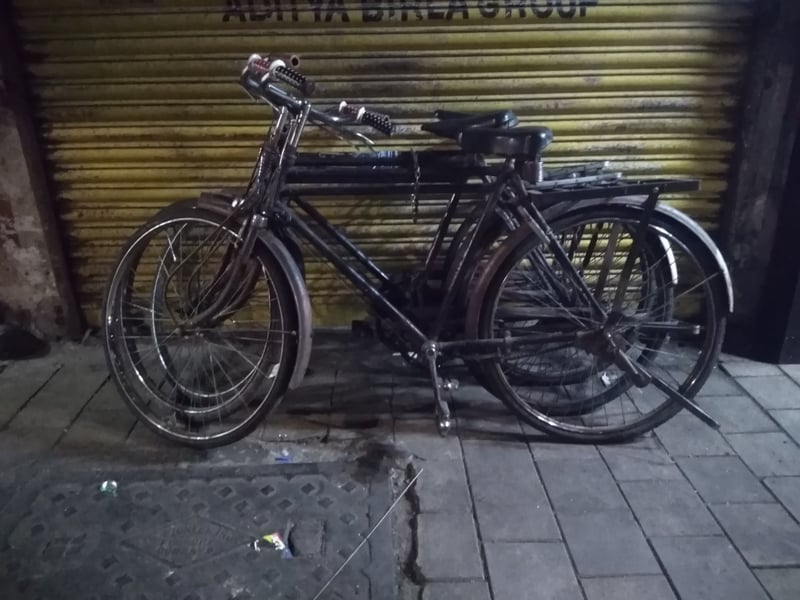 The front camera takes decent selfies that can be used on social media, as long as there's favourable light. Video recording goes up to 1080p with both the front and rear cameras. We found that video taken at this resolution was jerky and that the autofocus was erratic. The quality was also not very impressive. Lower-resolution videos fared a bit better.

On the other hand, battery life is a bright spot. We were able to get through a full day of casual usage, including a bit of gaming and video streaming, and had a little bit of power left over. Our HD video loop test ran for 10 hours, 12 minutes.

Verdict
The Honor Holly 4 could have been a great phone at this time last year, but it fades in comparison to Xiaomi's rather expansive lineup in the sub-Rs. 15,000 market. Lenovo also has a few great models, including the recently launched Moto G5s series (Review). Honor's own Honor 8 Lite (Review) sells for under Rs. 15,000 and surprisingly, the 32GB version of the Honor 6X (Review) sells at the same price of Rs. 11,999 (though it is soon to be replaced). While the Honor 6X has a very gimmicky dual camera feature, at least it stands out. The new Holly 4 just seems lost in this mix.

This phone doesn't excel at any one thing but there's nothing drastically wrong with it to the point that it's unusable. However, even in the aspects that it does have going for it, such as battery life, it's overshadowed by its competition. There's very little reason to get excited by this phone, even if you're a brand loyalist. Honor needs to seriously consider knocking the price down by a few thousand rupees if it wants this model to succeed.