Can the Honor 20i outperform capable rivals from Xiaomi, Samsung, and Realme?

Honor 20i is the latest mid-range warrior from Honor, designed to challenge the dominance of Xiaomi, Realme, and a resurgent Samsung in a segment with cut-throat competition. Priced at Rs. 14,999, the Honor 20i promises capable cameras and feature-rich software experience, all bundled in a flashy body.

If you can keep aside the dilemma of Huawei and Honor's uncertain future in the Android smartphone market, the Honor 20i appears to be a strong mid-range phone going by its specifications on paper. How well does it perform in day-to-day usage? We find out in our review.

The Honor 20i has a polycarbonate rear panel which flaunts a gradient design. Honor claims that the finish has been achieved through a 3D photolithography process. We have the phone's Phantom Blue option for review, which is a royal blue shade at the top and gradually fades into a bright purple hue towards the bottom.

The Honor 20i also comes in Phantom Red and Midnight Black colour options, but the latter lacks a dual-tone finish and looks more understated. The rim keeping the rear and front panels together is also made out of thick plastic and has a glossy finish.

The curved edges ensure a comfortable grip, but this phone is slippery, and the glossy surface of the rear panel attracts smudges and scuff marks rather quickly. We also noticed some flex on the rear panel, especially in the middle. 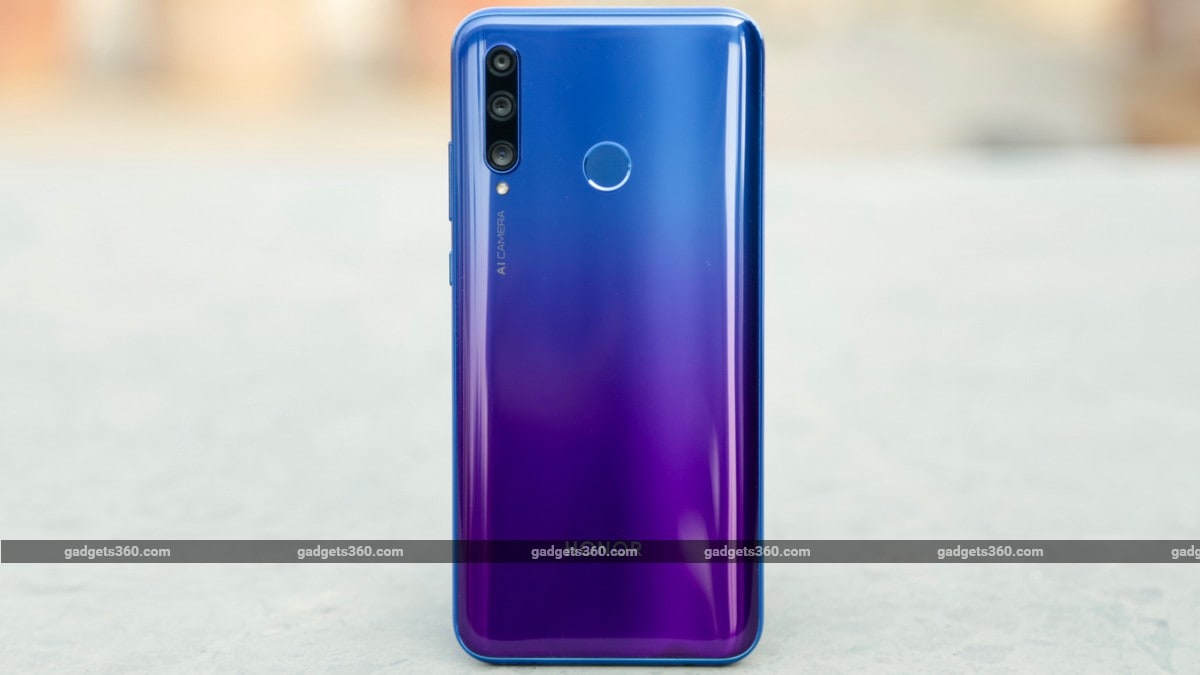 The power button and volume rocker are comfortably positioned on the right side and provide a good tactile response when pressed. The hybrid dual-SIM card tray is located at the top and can house either two Nano-SIMs, or a single SIM accompanied by a microSD card. The speaker, 3.5mm headphone jack, and Micro-USB port are located at the bottom.

The vertically oriented triple rear camera module protrudes a little, but not enough to cause the phone to wobble when lying on a flat surface. The fingerprint sensor is slightly recessed and we could reach it easily with an index finger without stretching. We did not have any trouble with fingerprint recognition speed or accuracy.

One-handed usage is also not an issue. The tapering edges make the phone look thinner than it actually is. Save for the flex in the rear panel, the Honor 20i feels pretty solid. As far as aesthetics go, this phone will appeal to folks who like gradient designs with punchy colours.

Honor 20i specifications and software

The Honor 20i comes equipped with a 6.21-inch full-HD+ (1080x2340 pixels) display with a 19.5:9 aspect ratio and a screen-to-body ratio of over 90 percent. The panel has a pixel density of 415ppi and is certified by TUV Rheinland for cutting down blue light emission. 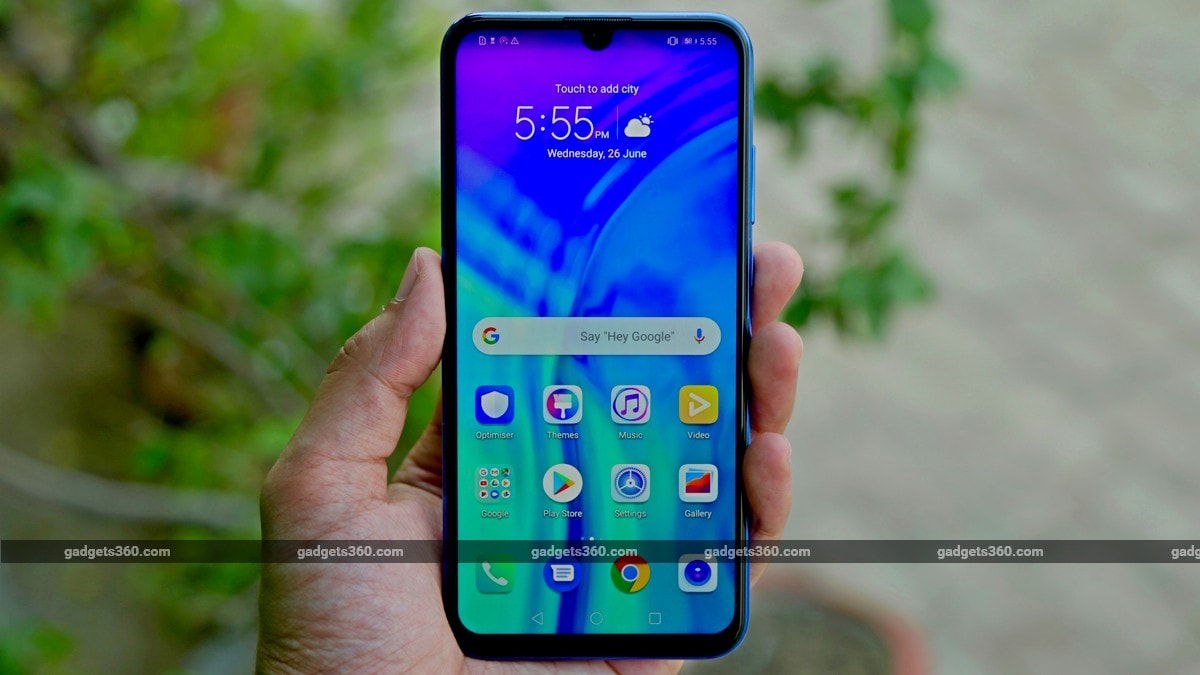 The display temperature is on the warmer side by default, but it can be adjusted.

The Honor phone is powered by Huawei's in-house octa-core Kirin 710 SoC clocked at 2.2GHz, paired with 4GB of RAM. The Honor 20i comes in a single configuration with 128GB of internal storage, which can be expanded by up to 512GB.

The lights are kept on by a 3,400mAh battery, which can be topped up by the bundled 10W charger. The box contents include the phone itself, a charger, a Micro-USB cable, a SIM eject pin, a transparent TPU cover, and some paperwork.

On the software side, the Honor 20i runs EMUI 9.0.1 based on Android Pie. Our review unit ran the May 2019 Android security patch. EMUI 9.0.1 offers a tonne of features and customisation options, right from enabling or disabling an app drawer to selecting between three different gesture navigation schemes.

The phone comes with a lot of preinstalled in-house apps such as Honor Club, HiCare, Honor Store, App Gallery, and Phone Clone, to name a few. Tools such as Ride Mode, SOS, Recorder, and Torch are implemented as individual apps. The Downloads app provides an easy way to manage all files downloaded via the browser. 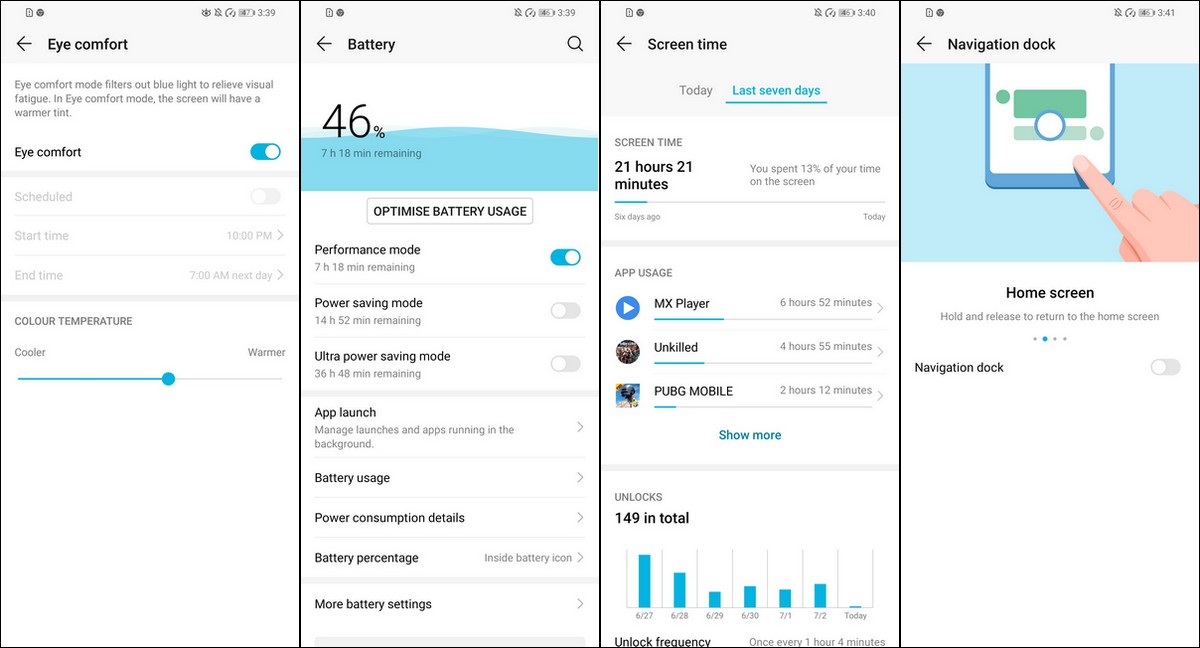 There is also some third-party bloatware as well, in the form of Facebook, Facebook Messenger, Netflix, Camera 360, and Vigo Video. Some of these apps sent us pesky notifications, but that can be taken care of by revoking their permission to send notifications.

As far as features go, you get Digital Balance for monitoring your phone usage statistics, setting app usage limits, and assessing screen time. The Bedtime feature turns the screen grey and restricts access to user-specified apps. EMUI offers a rich selection of features, but you have to get past its learning curve and garish UI design.

Honor 20i display and performance

The Honor 20i's 6.21-inch full-HD+ (1080x2340 pixels) display renders crisp content and vibrant colours. Viewing angles are good and the brightness level is also up to the mark, as we did not feel the need to crank it beyond 80 percent under sunlight.

Despite having the same resolution at a similar size compared to the display of the Honor 20 (Review), the Honor 20i's panel renders oversaturated colours. The level of detail one can see on the Honor 20's display is also higher. 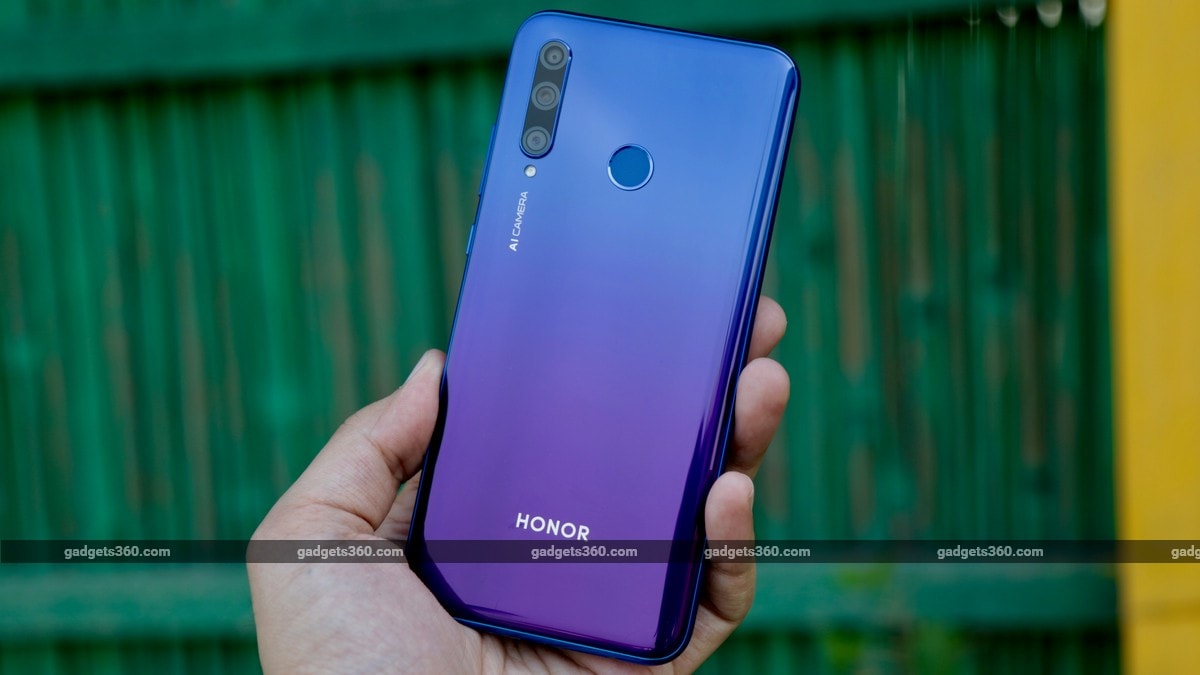 The smart resolution feature automatically tones down the resolution from full-HD+ to HD+ in order to save power. For a more comfortable reading experience, the Honor 20i offers a reading mode that imparts a yellowish tint to the display and cuts down on blue light exposure.

A major drawback is that this phone lacks Widevine L1 DRM certification, which means users cannot stream content at HD resolutions on platforms like Amazon Prime Video and Netflix.

As far as performance goes, the Kirin 710 powering the Honor 20i proved to be a reliable workhorse. The phone did not lag or stutter during day-to-day usage, even with 10 to 15 apps running in the background. Switching between apps was smooth, and the swipe-based navigation gestures worked without a hitch.

When it comes to gaming, the Honor 20i let us play PUBG Mobile at medium graphics settings, and Asphalt 9: Legends also ran smoothly without any noticeable frame drops. However, we noticed occasional input lag while playing graphics-intensive games, and app switching also felt a little jerky while heavy games were loaded in the background.

As far as synthetic benchmark scores go, the Honor 20i scored 1,562 and 5,450 in Geekbench 4's single-core and multi-core tests respectively. On AnTuTu, the phone managed 1,38,751. The benchmark scores show that the Kirin 710 falls in the same performance ballpark as the Qualcomm Snapdragon 660 and MediaTek Helio P70. The Honor 20i put up a tally of 990 in 3DMark Sling Shot Extreme, and 21,950 in 3DMark Ice Storm Unlimited.

The phone's vibration feedback is quite aggressive, but there is no way to bring down the vibration intensity other than disabling it altogether.

Honor 20i camera and battery life

The Honor 20i is among a small number of phones priced below the Rs. 15,000 mark in India which offer triple rear cameras. One area in which this phone shines is macro shots. It took some beautiful close-up photos with a good amount of surface detail and vibrant colours. However, we have seen better depth control and edge detection from the Redmi Note 7 Pro and the Realme 3 Pro's cameras. 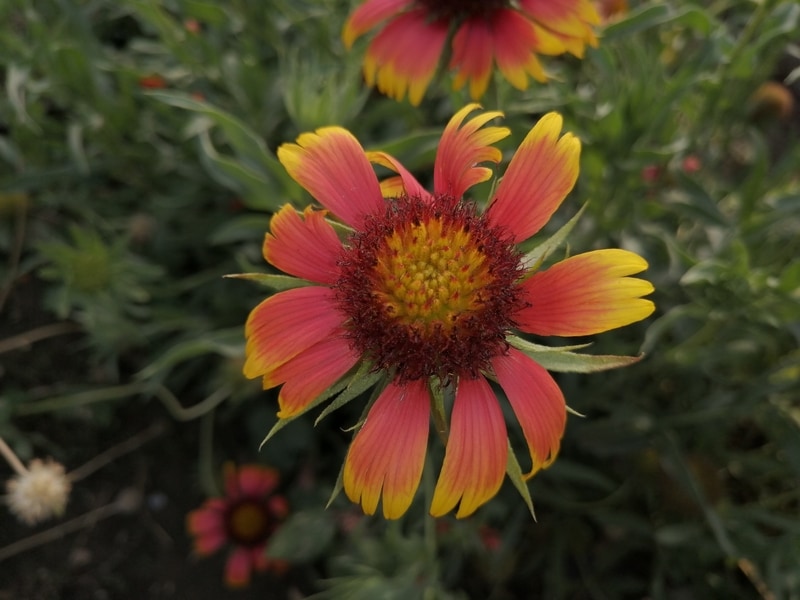 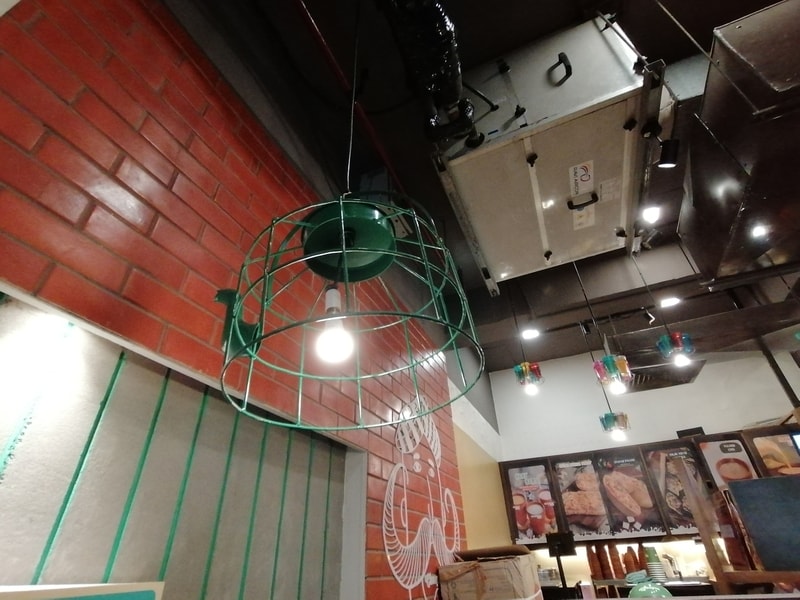 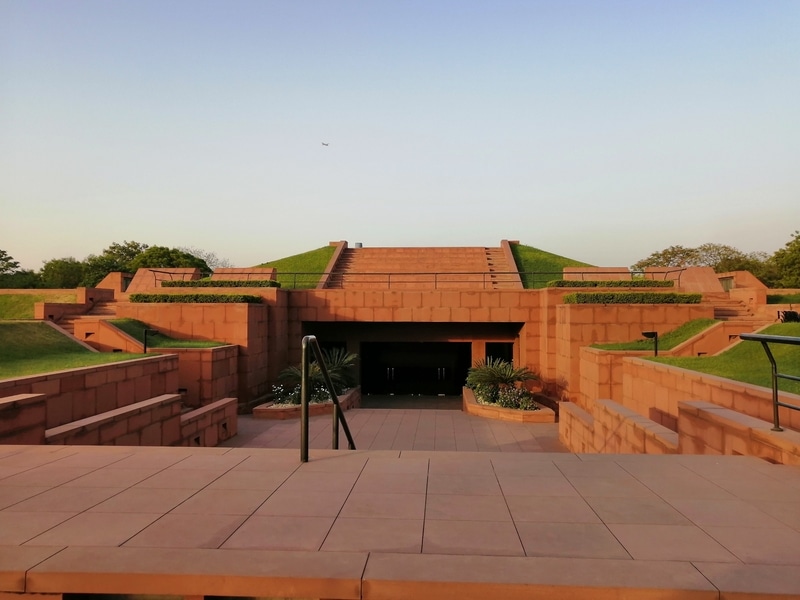 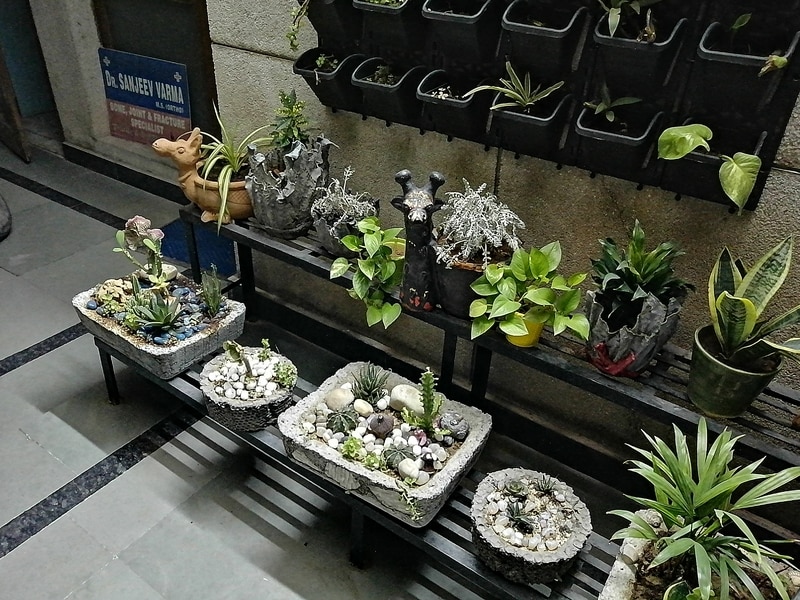 In daylight, the phone takes slightly oversaturated photos, and even though they look good on the phone, the lack of detail and low sharpness is clearly visible while viewing them on a larger screen. Enabling the AI mode helps with the dynamic range and boosts colours.

The phone struggled with dynamic range under harsh daylight, and often captured photos that were soft and exhibited washed-out colours. When ambient light was better, the main camera captured photos with decent sharpness and depth of field.

The camera app's Portrait mode did a decent job of highlighting objects in focus and edge detection was also good, but the background blur effect often turned out to be uneven. Thankfully, we did not come across any focus lock issues.

The 32-megapixel front-facing camera captures bright selfies with a good amount of detail. The Honor 20i, however, does a fair bit of whitening and also makes background elements look dull when using this camera indoors. Portrait selfies, despite highlighting the subject in focus, often had imperfect edge detection.

There are a host of camera features to play with, such as multiple portrait lighting effects, AR lenses, live filters, and background filters. The wide-angle sensor proved handy for capturing wider frames, but the images captured by it had a cooler temperature and exhibited some distortion around the edges. However, this phone does not support RAW image capturing.

There is a dedicated Night mode for low-light photography, but the results were nothing worth writing home about. The Honor 20i's Night mode brings out the colours in low-light scenarios and enhances the edges of objects, but the resulting photos had a lot of noise and a grainy texture. The Night mode does not work for the selfie camera though. 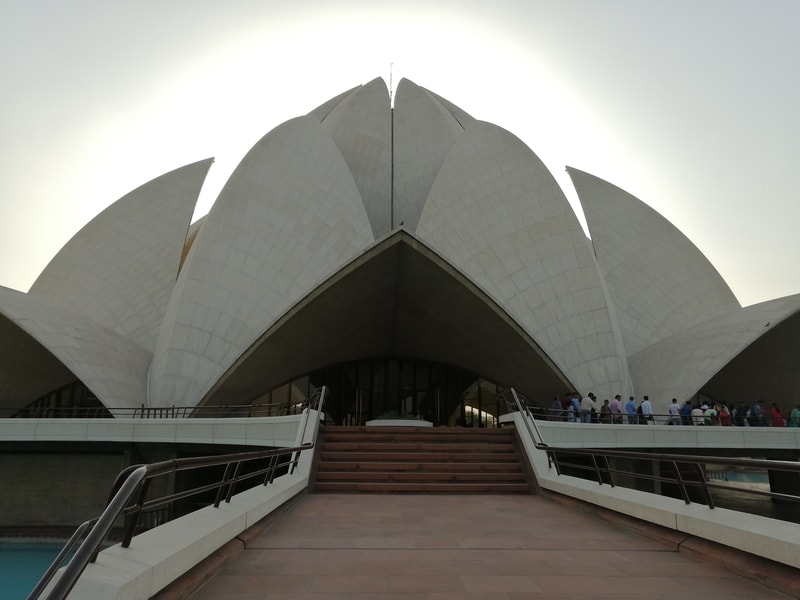 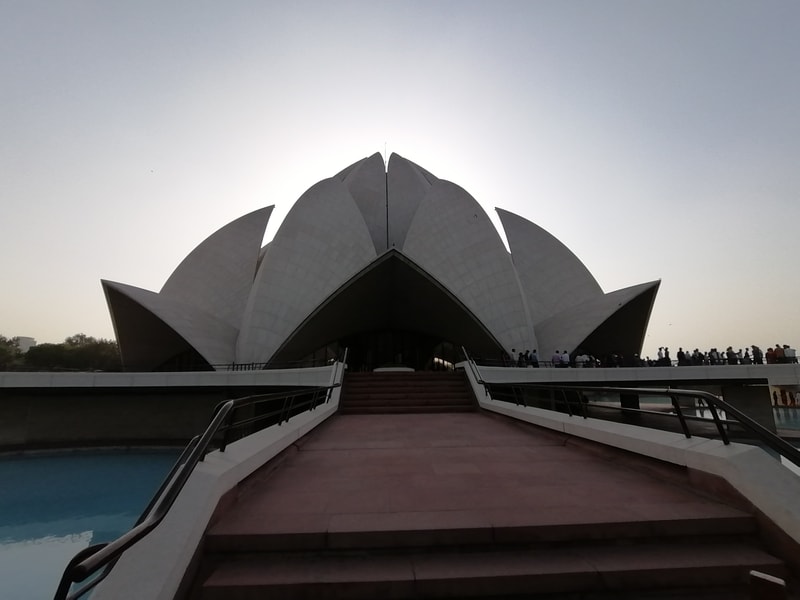 Normal mode (top) and wide-angle mode (bottom) on the Honor 20i. Tap to see full-sized images

The Aperture mode uses the depth sensor to let users change the point of focus and adjust the blur effect accordingly, both while clicking photos and after they have been saved in the gallery.

The Honor 20i can record full-HD video at up to 60fps. As far as quality goes, the camera struggles with locking focus, and the lack of stabilisation means there is a fair bit of jerkiness as well.

Additionally, there are a few limitations when it comes to recording videos. The beautification filters only work when shooting video at 720p. The phone does not support 4K video capture, and the wide-angle camera is unable to shoot full-HD videos at 60fps. The Honor 20i lacks support for recording slo-mo videos as well.

Coming to the battery endurance figures, the Honor 20i's 3,400 mAh battery barely managed to last through a full workday involving social media app usage, Web browsing, listening to music over wireless headphones for a couple of hours, occasional calls, and around 45 minutes of gaming. It lasted even less on days that we spent more time playing games.

The battery was fully depleted by the end of a typical workday, which in our case was around 7pm. There was no juice left for listening to music and using social media apps during our commute home, which was disappointing.

In our battery loop test, the Honor 20i lasted 15 hours 11 minutes. The bundled charger takes roughly 2 hours to fully charge this phone. The power saving and ultra power saving modes can come in handy if you need to save some battery power.

Verdict
The Honor 20i appears to be a capable phone, even if it isn't as capable as some other lower-priced options. Performance-wise, the phone manages to handle productivity tasks with ease and can also hold its own when it comes to gaming. EMUI is loaded with features, which offers some value over stock Android.

In the camera department, the Honor 20i proves to be a mixed bag. There are a host of camera features at the disposal of users, but actual performance, especially the Night mode and Portrait mode, is weaker than what the competition offers.

The Oppo K1 (Review) is also worth checking out as it offers capable hardware and dependable performance, while also throwing in an in-display fingerprint sensor. At its current price of Rs. 14,999, the Honor 20i is simply not the best choice when more powerful alternatives are readily available.