Huawei's sub-brand Honor had a good run last year. It managed to make its presence felt in the market by launching multiple smartphones at different price points. Sticking to its strategy, the company is launching its first smartphone of 2019, the Honor 10 Lite in India. The new smartphone sticks to glossy paint jobs commonly seen on Honor devices and is the first phone from the company to sport a dewdrop notch. We got to spend some time with the Honor 10 Lite and here are our first impressions of the device.

While it sounds like a lite version of the Honor 10 (Review), it has a completely different design. The Honor 10 Lite has a big 6.21-inch display at the front with a tiny dewdrop notch at the top. It is the smallest notch we have seen on an Honor smartphone yet.

In order to make it small, Honor has pushed the earpiece outside the notch area and into the frame of the phone, something other manufacturers like Oppo and Realme have done with the R17 Pro (Review) and the 2 Pro (Review) respectively.

Honor claims that the 10 Lite has a 91 per cent screen-to-body ratio thanks to a smaller bottom bezel. The company also says that the chip-on-film screen technology enables them to make thinner bottom bezels. The Honor 10 Lite is sure to grab eyeballs as the glossy finish at the back reflects light. We had the Sapphire Blue unit, but the phone is also available in Sky Blue and Midnight Black.

While the glossy finish on the back is eye-catching, it is also a fingerprint magnet. After using the smartphone for around ten minutes, we had lots of fingerprints all over the device. You will need to wipe the back multiple times in a day to keep it clean. If you don't want to do this exercise, you can simply pop it into a cover that Honor ships in the box.

The frame, as well as the back of this phone, is made out of plastic which helps keep the weight of the device down. Honor has positioned the power and volume buttons on the right but is slightly higher for our liking. The left side is bare while the SIM tray sits on the top of the device along with the secondary microphone. At the bottom, it has a Micro-USB port, a 3.5mm headphone jack, and a loudspeaker grille. The Honor 10 Lite has a 3400mAh non-removable battery and comes with a 10W charger in the box.

We found the fingerprint scanner to be slightly higher forcing us to stretch slightly. Face recognition is also available which puts the selfie camera to use and is quick to unlock the smartphone. You will have to wait until the full review for a detailed assessment of all these features.

The Honor 10 Lite is powered by Huawei's Kirin 710 SoC which is also powering phones like the Honor 8X (Review) as well as the Huawei Nova 3i (Review). It has four Cortex-A73 cores clocked at 2.2GHz and four Cortex-A53 cores clocked at 1.7GHz. Our unit had 4GB of RAM and 64GB of storage which is further expandable via the hybrid SIM slot. This SoC and RAM combination was capable of delivering a smooth usable experience during our hands-on period. Honor also has a 6GB variant if you are amongst the ones who frequently multitask. The Honor 10 Lite is a dual SIM device and has support for 4G as well as VoLTE on both SIM slots.

We will be putting the device through its paces by running our intensive benchmark tests during the full review. In terms of software, it runs EMUI 9.0.1 on top of Android 9 Pie. It is one of the few budget phones to run Pie out of the box. EMUI has got a few tweaks as well and now includes Digital Balance which is similar to Digital Wellbeing found on Android Pie powered devices. EMUI has support for Themes letting you customise the phone right down to the icon back.

The Honor 10 Lite does have some amount of bloatware preinstalled. It has HiCare, AppGallery, Honor Club, Camera360, Vigo Video, Messenger, and Netflix preinstalled. Honor apps like Party Mode and Ride Mode come preinstalled. The smartphone also has a custom Music, Video, and Email app. 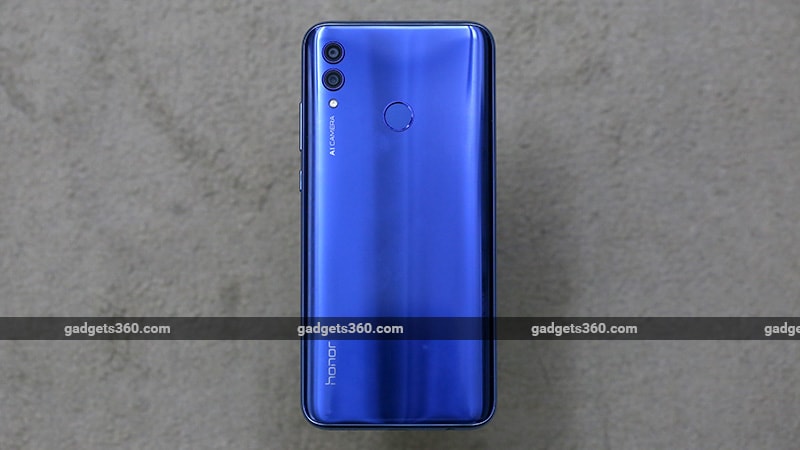 The new Honor 10 Lite is expected to be priced around the at Rs. 15,000 mark, which is a very competitive price segment at the moment. We have smartphones like the Xiaomi Mi A2 (Review) , Realme U1 (Review) and the Realme 2 Pro (Review) already slugging it out there.

Can the Honor 10 Lite beat them all? Stay tuned to Gadgets 360 for the full review of the device where we will test the phone's performance, cameras, battery life, and more.

Further reading: Honor, Honor 10 Lite
Aditya Shenoy Email Aditya
Aditya Shenoy reviews smartphones, wearables, headphones and speakers for Gadgets 360, out of Mumbai. Aditya is a reviewer for Gadgets 360 and has written extensively about smartphones, software updates, and upcoming devices. Aditya is available on Twitter at @adishenoy, and you can mail him at adityashenoy@ndtv.com, so please send in your leads and tips. More
Vivo Y93 3GB RAM, 64GB Storage Variant Launched in India: Price, Specifications
PS5 May Have Backwards Compatibility With PS4 Games via PS Now: Analyst