Gionee has been rapidly expanding its 'Elife S' series off late. It launched the Gionee S Plus in November and has now launched its fourth offering, the Gionee S6. While the two smartphones come with almost identical specifications, the S6 emphasises on a more premium build, as well as support for VoLTE.

The phone is priced at Rs. 19,999 and in terms of product positioning, the Gionee S6 will go up against the Oppo R7 Lite (Review). Let's see how the S6 fares against the competition.

The Gionee S6 doesn't exactly have an identity it can call its own. Unlike a current-gen Motorola phone - which is instantly recognisable due to its iconic design - one could easily mistake the S6 for a smartphone by Huawei or LeEco. To be fair, this is probably true of most offerings launched by Chinese companies these days. Having said that, Gionee has done a good job with the unibody aluminium build and the phone looks pretty good in rose gold. It's comfortable to hold and the button placement in spot-on, allowing for some level of single-handed use. 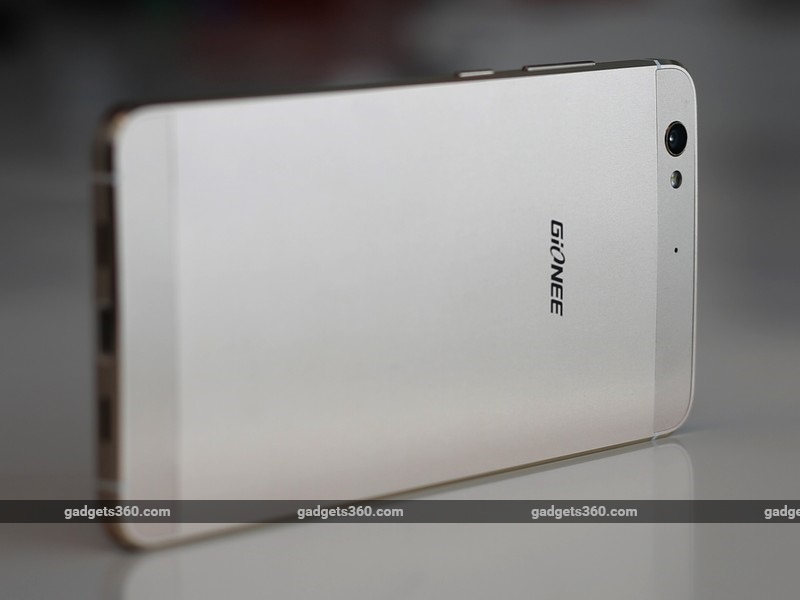 The 5.5-inch HD Amoled display on the Gionee S6 gets Gorilla Glass 3 for protection and it is quite legible under most lighting conditions. However, the colours are wildly oversaturated which can get a little jarring at times. We wished there was an option to tweak the colours for a more natural effect. 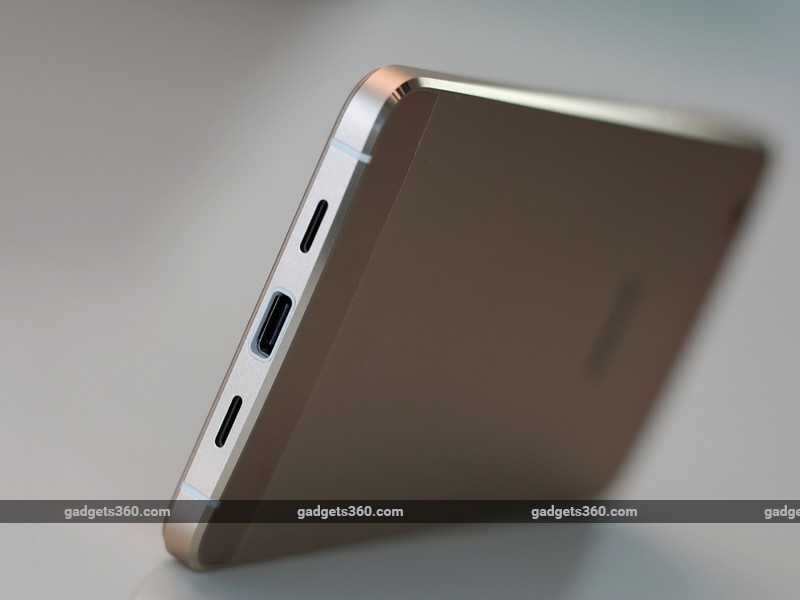 There are non-backlit capacitive buttons at the bottom for navigation that are fairly responsive. The buttons on the side have good tactile feedback as well. At the bottom, we have a USB Type-C charging port (USB 2.0 speeds) which is flanked by two speaker grilles. Around the back, we have a 13-megapixel camera and the LED flash. There's a 5-megapixel camera in the front as well as a notification LED that's hidden away in the front facia. 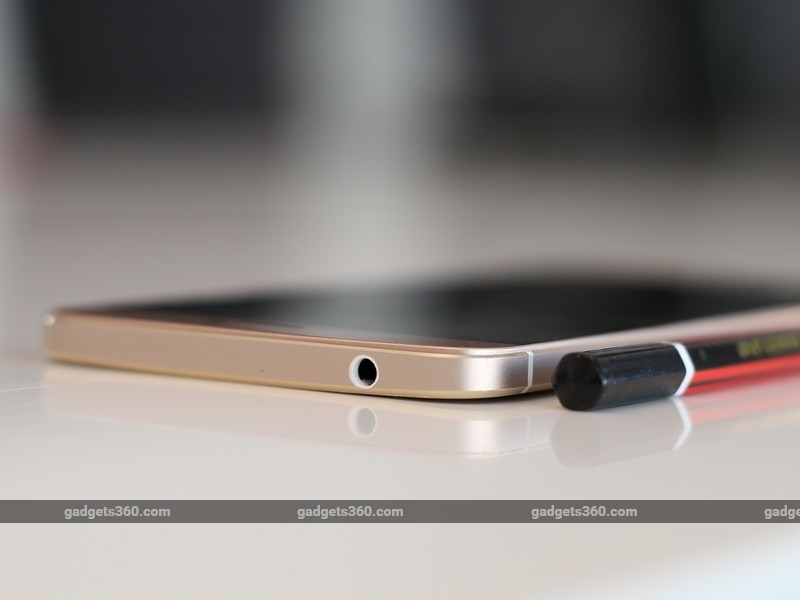 The Gionee S6 supports Dual-SIM 4G with VoLTE, which is accessible via the SIM tray on the left. This is hybrid SIM tray which means you'll have to choose between a second SIM or a microSD card. The battery is sealed inside and is non-removable. 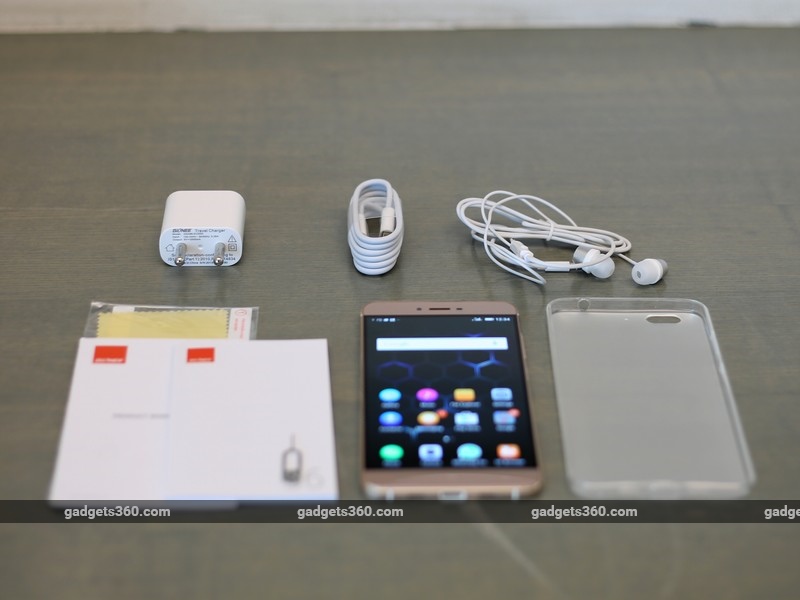 The phone ships with a 10W charger, data cable, in-ear headset, screen guard, silicone case and the usual warranty information booklets. The quality of the accessories is alright, although we would have liked to see a higher-grade USB cable, as the supplised one doesn't feel too durable. The S6 scores well in the build and aesthetics department and gets no complaints from us. It's quite light too at 148g and slim enough to fit into your skinny jeans pocket.

In terms of power, Gionee gives you an octa-core MediaTek MT6753T SoC running at 1.3GHz and 3GB of RAM. It's not the most powerful SoC to be honest, especially for this price, as we've seen this in phones that cost nearly half as much. For storage, there's 32GB of onboard storage that you can expand by 128GB; there's Wi-Fi b/g/n, Bluetooth 4.0, GPS, USB OTG, FM radio and Wi-Fi Direct. The phone supports 4G LTE on Band40 as well as VoLTE, so you will be able to use it with Reliance's upcoming Jio platform. 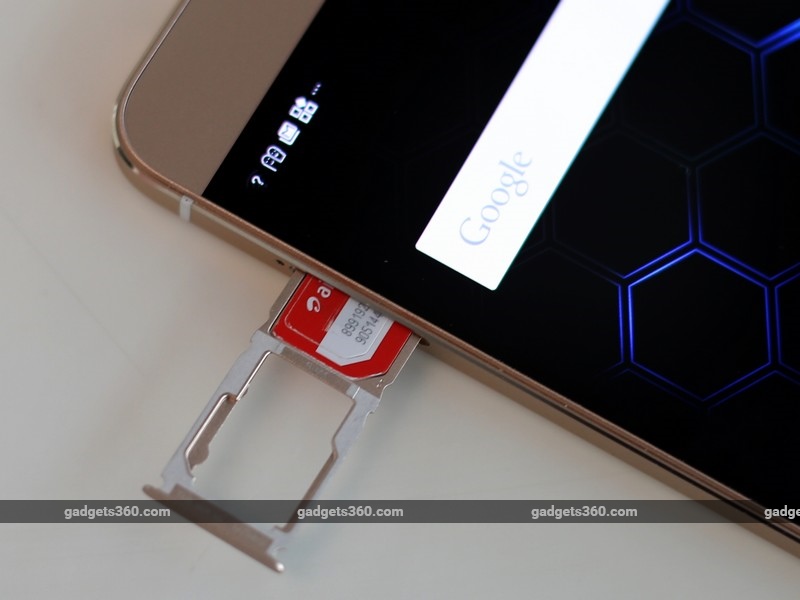 It's business as usual in the software department. The Gionee S6 runs the Amigo 3.1 skin on top of Android 5.1 Lollipop. There's the usual suite of apps which we've covered extensively in past reviews like the Gionee Marathon M5. Most of the third-party apps like the trial games and productivity apps can be uninstalled. You also get an app called Kids Home, which lets you grant your kids access to select apps. The phone also comes with AMI Note and AMI Lock apps from Gionee, but these weren't present on our review unit. 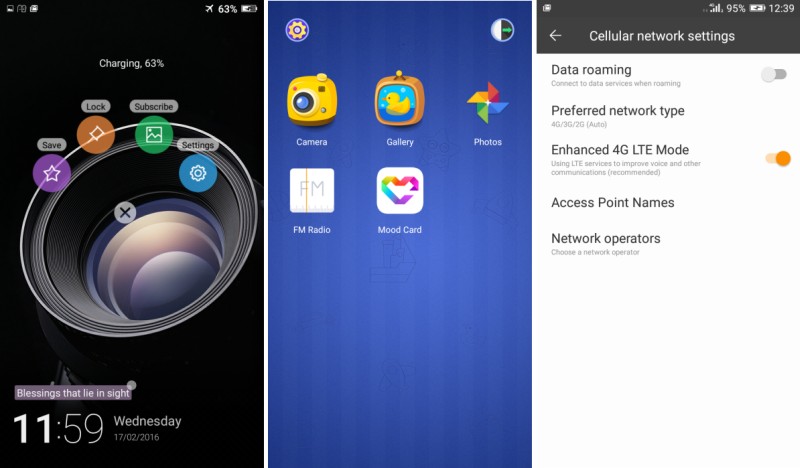 Gionee has added some neat touches in Amigo 3.1, like the ability to quickly access your hidden photos with a simple pinch-out gesture in the gallery app. You can also safely eject OTG drives by simply tapping the button in the notification bar.

Despite the extensive skin, Android runs very smoothly without any hiccups. Multi-tasking and transition effects are lag-free as there's about 1.6GB of free RAM available at any given point. The phone gets a bit warm during gaming or video playback but never uncomfortably hot. Voice calls are handled well too although the edge around the earpiece doesn't offer the most comfortable feeling if you're on a long call. VoLTE is a future-proof feature to have as it will also work on the Reliance Jio network. 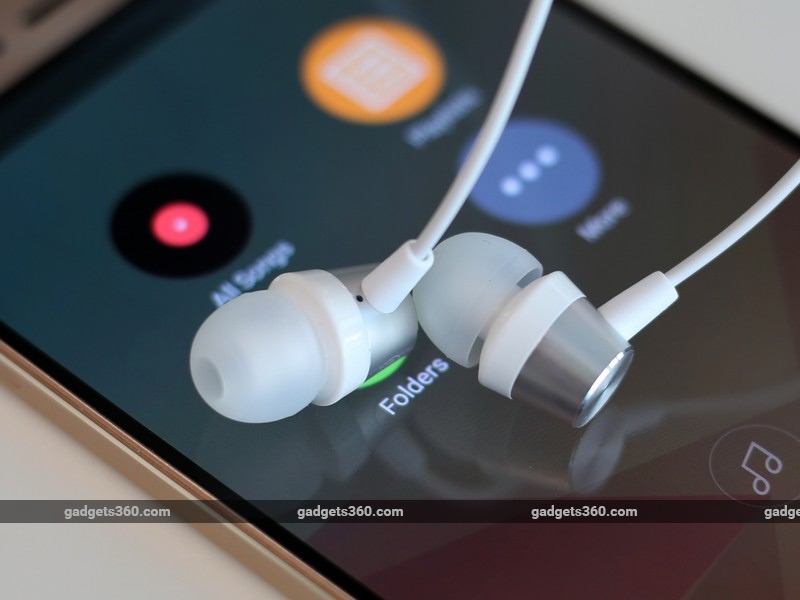 Benchmark scores are pretty good too and in some tests, the MediaTek chip sneaks past a similarly spec'd Snapdragon 615. We got a score of 37845 in AnTuTu and 20fps in GFXBench's T Rex test. Real world games runs pretty smoothly, right from simple ones like Alto's Adventure to more graphically demanding games like Asphalt 8.

The Gionee S6 does well with multimedia files too, playing back 1080p videos with ease. The stock video player has the option to enable DTS audio, which adds a nice boost to the sound. The effect is better heard with the bundled headset than with the speaker. The audio player gets similar enhancements along with other options to tweak the sound stage. Audio quality is good with the provided headset while the loud speaker does a decent job with alerts, but isn't great for watching movies. 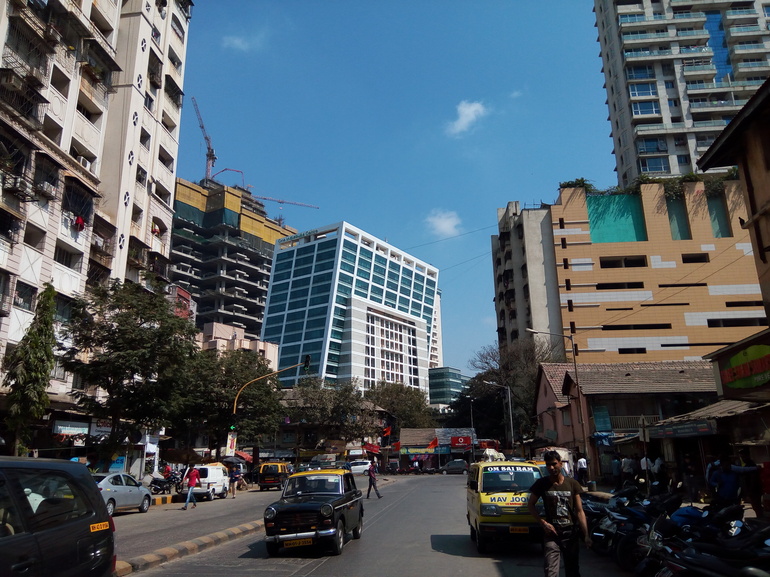 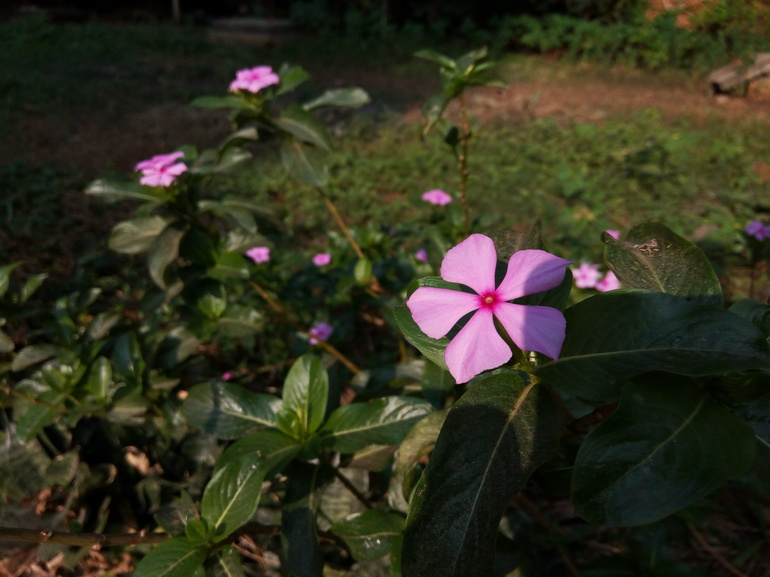 The 13-megapixel rear camera captures very good detail and good colours in daylight. Landscapes and macros are sharp and well-detailed and the camera is quick to focus and capture the image. We found the HDR mode to be a bit temperamental as it refused to capture an HDR shot. Low-light shots aren't great as there's quite a bit of noise that creeps into the picture, but overall it's acceptable. 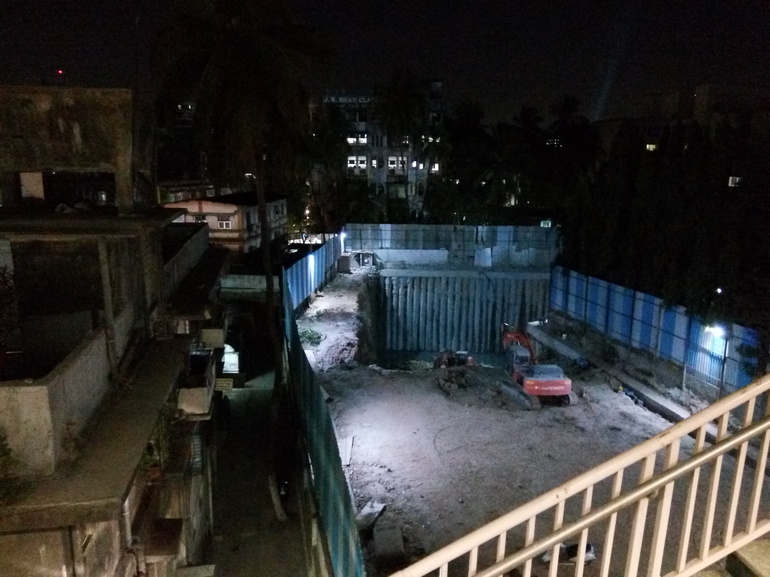 There are a bunch of shooting modes play around with including GIF, a barcode scanner, and a professional mode. The front camera captures decent selfies indoors. Quality of recorded video is good too and is fairly stead thanks to the software stabilisation.

The 3150mAh battery managed to last 12 hours and 3 minutes in our video loop test, which is good. During real world usage, we managed to get up to a day and a half before needing to charge the phone. Although Gionee doesn't explicitly talk about fast charging, the 10W charger manages to charge the battery pretty quickly as we went from zero to 35 percent in roughly half an hour. 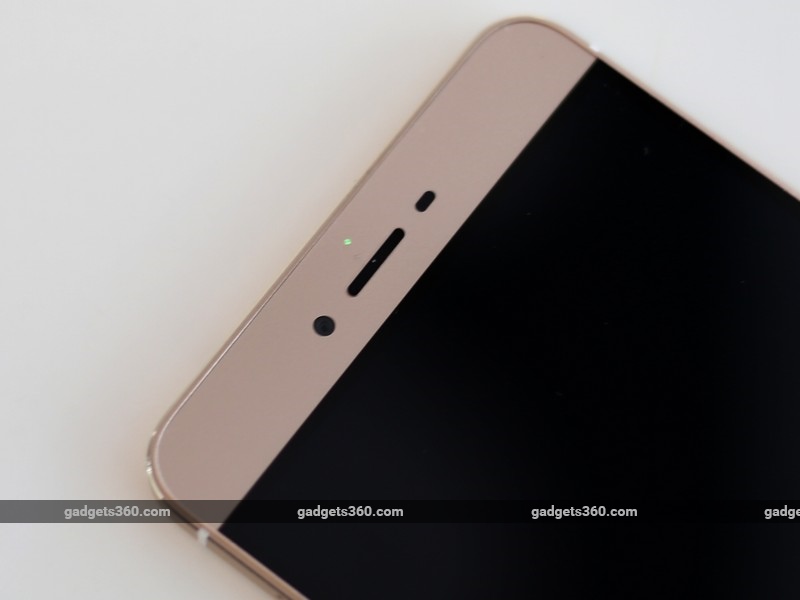 The Gionee S6 is a well-crafted smartphone and in some ways, offers better value than Oppo's R7 Lite since it has double the onboard storage, FM radio, and supports VoLTE out-of-the-box. Given its price, we would have liked a more powerful SoC and a better display in the S6, as it would have been a good opportunity for Gionee to truly disrupt the mid-range market. But the company has played it safe and the premium you're paying is for the design and build.

VoLTE is an important feature to have and although you won't be able to use it right away, it will be immensely handy if you do switch to Reliance's 4G network or stick around for others to launch their VoLTE services. Technically, most smartphones today with LTE capability (including non-TD LTE phones) could support VoLTE if the manufacture pushes out a software update to enable this.

The Gionee S6 is a good phone in its own right but feels a bit expensive for the hardware on offer. Plus, it's also lacking some features like NFC and a fingerprint sensor, which would have been nice to have.