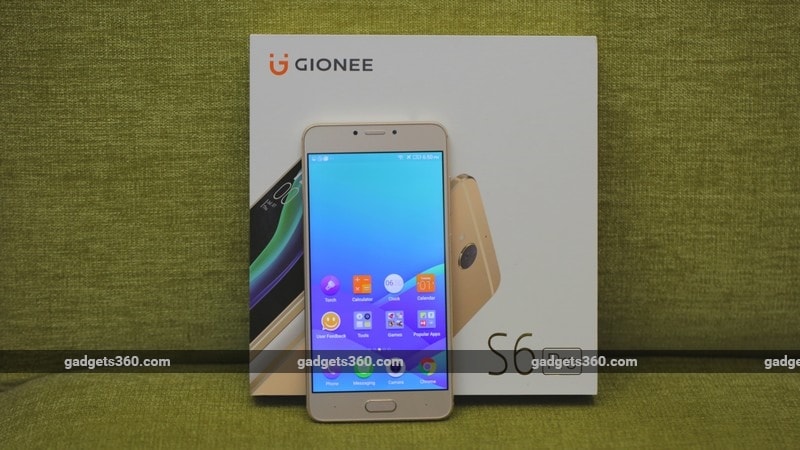 Gionee’s portfolio continues to expand with its latest instalment called the S6 Pro. The company first debuted the S6 in India back in February, and has been iterating on it ever since. We recently reviewed the S6s, which is a version of the S6 that focused primarily on selfies. The new S6 Pro is also a ‘selfie-focused’ smartphone but with more power under the hood.

Both the Gionee S6 and Gionee S6s were pretty average offerings, with the only consistent positives being their battery life and build quality. Also, considering these phones were priced little above Rs. 15,000, we weren’t expecting great results either. However, the S6 Pro is priced in the upper mid-range segment at Rs. 23,999, which puts it in direct competition with the likes of the Xiaomi Mi 5 (Review), Moto Z Play (Review), HTC One A9 (Review), and Asus Zenfone 3 (ZE520KL). Is the S6 Pro worth the premium it commands? Let’s find out.

Gionee S6 Pro design and build
The new model's design language has stayed relatively true to that of the original S6, with minor tweaks here and there. Chamfered edges along the sides add to its visual appeal. According to Gionee, the chassis of the S6 Pro is nearly all-metal, which lends it a sturdy feel and makes it looks quite premium. The phone is slim and doesn’t feel too heavy. The fit and finish of everything is mostly good, except for the home button, whose edges feel a bit rough. The earpiece is also placed a bit higher than usual, which ends up looking a bit odd.

The display offers good enough brightness for outdoor use, and the resolution is high enough for sharp images and text. It’s a 5.5-inch full HD IPS panel with Gorilla Glass 3 protection. There are two capacitive buttons below for navigation but no backlighting for these keys. You do get a notification LED beside the front camera on the top. The left side houses the hybrid Dual-SIM tray while the power and volume buttons sit on the right. The tactile feedback is good and placement is ergonomic. There’s a headphones socket at the top and a USB Type-C port at the bottom, with a single mono speaker just beside it.

Around the back, we have the 13-megapixel camera and single-LED flash. The circular indent in the metal frame below is only for Gionee's logo, as the fingerprint sensor is integrated into the home button. Rather than having the IMEI number etched onto the metal, Gionee has resorted to a simple sticker, which is quite an eyesore.

The S6 Pro ships with a 10W wall adapter, USB cable, headset, screen guard, and a simple silicon case. The quality of the accessories is good and they felt quite durable. Overall, ergonomics are good and single-handed use is possible to an extent thanks to the slim bezels. The phone can get a bit slippery when you hold it but it isn' too bad.

Gionee S6 Pro specifications and features
The phone is powered by the octa-core MediaTek Helio P10 SoC, which is a bit more powerful than the usual MT6753 SoC that’s commonly used. You also get 4GB of RAM and a generous 64GB of storage. The latter can be expanded by using (up to) a 128GB microSD card instead of a second SIM.

Just like the S6s, the S6 Pro runs Android Marshmallow but with Gionee’s Amigo 3.2 user interface. This isn't one of our favourite Android forks, and this version doesn’t seem to be much different from what we've seen before. It’s a single-layered UI so all your app icons are spread across multiple home screens. The notifications shade will only show you notifications since toggle switches for functions such as Wi-Fi, Bluetooth, etc. are placed in another drawer, which can be accessed by swiping upwards from the bottom of the screen.

In the Settings app, you’ll find Edge Bar, which is a vertical list of app shortcuts which can be summoned by swiping either left of right on the home button. You can add up to six shortcuts here. The ‘Split screen’ feature lets you reply to an incoming message when watching a video without having to leave the video player. ‘Suspend button’ is a slightly misleading name, and in fact it’s nothing more than a floating carousel of shortcuts, much like the iPhone’s Assistive Touch feature and Xiaomi’s Quick Ball.

This being Amigo UI, you get a whole bunch of preinstalled apps. All third-party apps can be uninstalled but of course, those from Gionee cannot. There are trial games, popular shopping apps and social apps – all of which can be removed if not needed. Uninstalling apps is a fuss-free process, which we appreciate. The Abroad Service app is a bit like TripCase, which lets you manage your travel itinerary.

The phone also ships with Gionee’s own VR launcher app which works with most Google Cardboard VR headsets. We tried it with the OnePlus Loop VR headset, and it worked pretty well. By default, there's only a video player for 360-degree videos but you can find more VR apps and games from an app called G Store. Sadly, these apps aren’t added to the VR launcher app so you can’t access them with the headset on. The quality of games and apps on G Store is average at best, as most aren’t really optimised well. You’ll need to keep taking the phone out of the headset to navigate through the menus.

Gionee S6 Pro performance
Even with its heavy skin, general performance is good. We didn’t encounter any noticeable lag or stutter in the system animations or when switching between apps. The edges of phone heat up when using the camera and the entire body can get quite hot at times, but this wasn’t a consistent issue. GPU performance is lower than that of the comparably positioned Snapdragon 625 SoC. We got scores of 47,360 points in AnTuTu, 17fps in GFXbench, and 6281 in 3DMark Extreme. The fingerprint sensor works decently well for unlocking the device.

The S6 Pro does well in media playback. High-bitrate videos play just fine and audio quality is pretty good with the bundled headset. However, the speaker is a bit weak and sound is quite tinny at high volumes. The stock audio and video players do a good job at sorting your media files and also provide DTS audio boost, which can be toggled on or off.

The lack of PDAF or laser autofocus for the main 13-megapixel camera means that it's more difficult to get sharp, blur-free shots than with other phones. Focusing speed could have been a lot better, and it actually gets worse in low light. Landscapes shots lack details and colours, even in daylight. Photos viewed on the phone’s display don't look too bad, but problems are revealed on a larger screen. We even had trouble getting good detail with macro shots - even if subjects seem sharp and in focus while framing, the final picture is quite average. Low-light shots are below par too, with poor detail and lots of noise.

Gionee is touting its ‘screen flash’ feature for selfies but the truth is it's simply too weak to light up your whole face (let alone a group selfie), and the quality of the 8-megapixel front camera is nothing to shout about. The camera interface is thankfully easy to use, with tons to options to explore. There are a whole bunch of shooting modes, including Pro, slow-motion, panorama, etc. Video recording tops out at 1080p and the quality is again average at best. On the whole, we feel that the cameras could have been much better.

The 3130mAh battery lasted for 10 hours and 13 minutes in our video loop test, which is good. With regular usage, we were easily able to go about a little more than an entire day on a single charge. There’s no fast charging here but the high wattage adapter manages to fill the battery completely in a couple of hours.

Verdict
The upper mid-range segment of smartphones is generally where we find good all-rounders. Since these devices aren’t built to fit a tight budget, manufacturers can afford to put in some quality components to make them excel in a few departments but still keep users happy with the rest. Gionee’s previous S6 models have been good at battery life and build quality but haven't offered anything special in other areas. Sadly, nothing seems to have changed with the S6 Pro.

Apart from build quality, battery life and the display, there’s nothing that would make you pick this model over similarly priced ones from Lenovo, Xiaomi, Asus or HTC. The cameras continue to be the weakest link with both front and back ones offering mediocre performance in most lighting conditions. The phone also tends to heat up when using the camera. Gionee has missed out on details like Wi-Fi 802.11ac, NFC, backlit capacitive buttons, fast charging, and perhaps a dedicated slot for the microSD card. Overall, we'd recommend giving this one a pass.