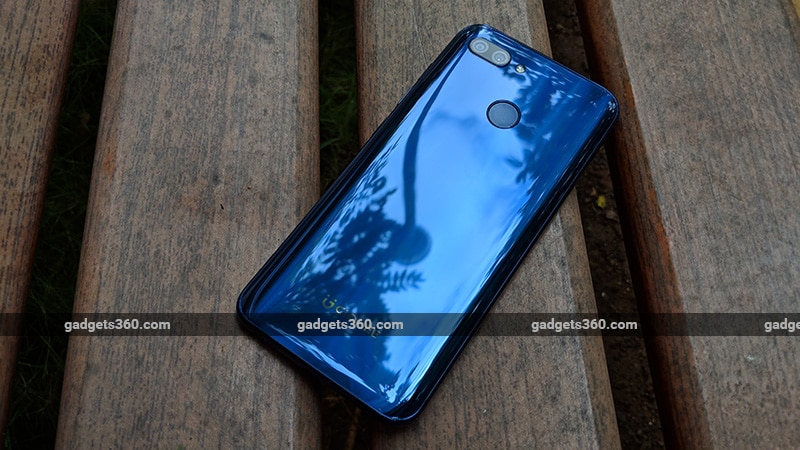 Chinese smartphone maker Gionee launched the S11 Lite alongside the Gionee F205 a few months ago and we did take a first look at the two devices right after their launch. The S11 Lite is the latest addition to Gionee's S series, and the first to sport an 18:9 aspect ratio display. It comes in a stunning blue colour, sports a dual camera setup, at the back and is exclusive to the offline market. For its asking price of Rs 13,999, can the Gionee S11 Lite compete with the current market leaders? We review to find out.

The shiny back of the Gionee S11 Lite was the first thing to grab our attention. Gionee calls it a "curved 3D glassy body," but it's actually plastic and feels like it. The back is also a fingerprint magnet and you will need to wipe it constantly to keep it looking good. Even the frame feels plasticky, and the power and volume buttons have the same design, making it hard to figure out which is which without looking at them. We also found that the buttons are placed a little higher than usual, which may require you to shuffle the phone in your hand.

At the front, this phone has a 5.7-inch display with an 18:9 aspect ratio. There is a Micro-USB port at the bottom along with a 3.5mm audio jack and a speaker grille. While the top of the phone is blank, the left has a SIM tray. The phone isn't heavy and is comfortable to hold thanks to the curved sides and proportions. Gionee sent us only the smartphone, so we can't say much about the box contents or the type of charger that this phone will ship with.

The Gionee S11 Lite sports a 5.7-inch display with HD+ resolution. Gionee could have opted for a full HD+ panel since that is what most of the competition offers at this price. However, it still has good contrast and the viewing angles are decent. You don't get options to tweak the display output in the Settings app, but we were happy with the quality. The display gets bright enough to be viewable outdoors but we found it to be a little too reflective.

Powering the Gionee S11 Lite is a Qualcomm Snapdragon 430 processor clocked at 1.4GHz. The phone also has 4GB of RAM and 32GB of internal storage. You can expand storage but only at the cost of the second SIM, since the S11 Lite has a hybrid dual-SIM tray. This device supports 4G and VoLTE on either SIM, but the other one will be restricted to 3G.

The phone has a 3030mAh battery. The dual camera setup on the rear consists of a 13-megapixel primary camera and a 2-megapixel secondary depth sensor. At the front, there's a 16-megapixel camera for selfies and video calling.

In terms of software, the Gionee S11 Lite runs on Android 7.1 Nougat with the company's custom Amigo 5.0 UI on top. Gionee has told Gadgets 360 that there is no timeline for an Android Oreo update for the S11 Lite, putting it at a disadvantage since most smartphones now ship with a more modern version. The phone's security is also out of date, and a lot of bloatware comes preinstalled. Social media apps such as Facebook, Messenger, and Instagram might be useful, but there are also demo versions of games such as Bubble Bash 3, Danger Dash, N.O.V.A. 3, and Sonic Runners, plus a lot of other apps including NewsPoint, Gaana, and Amazon. Most of these apps can be uninstalled.

Amigo UI has theme support and you can completely change the way this phone's software looks. There's also a way to keep changing lock screen wallpapers automatically based on the category you choose. G Store is Gionee's own app store, and Private Space lets you lock messages, call records, and apps with a fingerprint.

The Settings app is completely rearranged, and has a separate tab which lists all the custom functions the phone has, and how you can try them out. The Smart Assistant section lets you enable motion gestures to interact with the phone. There's also a Gaming Mode, which disables popup notifications so that you can play games without distraction.

The Snapdragon 430 processor powering this smartphone isn't the most powerful available at this price point. It is the same processor that was used for last year's Moto G5 (Review), and we have seen many models that are more powerful since then. The processor works well enough for basic tasks, but heavy apps and games will take longer to load.

We played Clash Royale and Asphalt 8, and while the former did not have any issues, Asphalt 8 took longer than usual to load. We ran benchmarks on the S11 Lite and it scored 57,738 in AnTuTu, and 660 and 2485 respectively in Geekbench's single-core and multi-core tests. In the graphics benchmark 3DMark Slingshot, it managed to score 536, while delivering 24fps in GFXBench T-Rex.

In our battery loop test, the smartphone managed to clock 12 hours and 46 minutes. With our usage consisting of emails and an active WhatsApp account, the S11 Lite was able to get through one day. You will need to plug it in by the next morning. We did observe heavy battery drain when gaming.

The camera app on the S11 Lite has multiple modes that you can choose from. Apart from the usual Photo and Video modes, it has Bokeh, Face Beauty, Group Selfie, Pro, and a Card mode to help you scan business cards. The phone is slow to switch to Bokeh mode, and the Pro mode only gives you basic controls.

Daylight photos taken with the S11 Lite were good, and you will only notice a loss of detail if you zoom in. It is quick to set the exposure and lock focus. The Auto HDR mode is quick to kick in but the effect isn't right and shots tend to look overexposed. It is quick to focus when shooting macros and manages decent separating between the subject and the background. We found macros to be slightly oversaturated. While shooting in bokeh mode we found that it takes longer to switch to this mode. Also, photos take a longer time to process when shooting. The edge detection is mediocre for the selfie camera but is slightly better for the rear camera.

Photos taken in low light lacked detail and appeared a little soft. Zoom in to an image and you will see artefacts caused by excessive noise reduction. The 16-megapixel selfie camera on the S11 Lite takes decent selfies in natural light. You also have a beautification option which you can use to smoothen skin. Shots come out looking average if there's an artificial light source nearby, but in low light, they lose out on detail. The screen flash is too dim to make any significant difference. Video recording maxes out at 1080p for the front as well as the rear cameras. It lacks Electronic Image Stabilisation (EIS) so you will need to keep your hand steady while recording.

Verdict
The Gionee S11 Lite is the first smartphone in the S-series to sport an 18:9 aspect ratio screen. It looks nice and will grab eyeballs when you are using it. Unfortunately, the hardware isn't the best at this price point. Smartphones such as the Xiaomi Redmi Note 5 (Review) and the Realme 1 (Review) offer better hardware at lower prices. The Gionee S11 Lite is an offline exclusive smartphone, so it might work for people who want to touch and feel a phone before they buy it. If you like the way the S11 looks, you can go for it. If you want better value for your money, you should consider the lower priced options named above, or take a look at the Asus Zenfone Max Pro M1 (Review) and the Xiaomi Redmi Note 5 Pro (Review) which perform better around the same price point.

Death Stranding: Everything We Know About This PS4 Exclusive
How to Reset Your iPhone or iPad