Gionee this week announced two new budget smartphones, the Gionee F205 and Gionee S11 Lite, in India. Launched at sub-Rs. 9,000 and sub-Rs. 15,000 price points respectively, both smartphones compete with offerings from the likes of market leaders Xiaomi, Samsung, Lenovo/ Motorola, and HMD Global. While the Gionee F205 will be available across online and offline retailers starting April 26, the Gionee S11 Lite will be made available nearer to the end of May. The key features of both smartphones are 18:9 displays, face recognition, and Private Space 2.0 (which creates a separate storage area that is locked down for privacy). The more expensive S11 Lite also gets dual rear cameras.

Are the combinations of hardware and software that each phone offers enough to take on the likes of the Xiaomi Redmi Note 5, Nokia 6, and Moto G5S? We spent some time with both the Gionee F205 and Gionee S11 Lite at the launch event in New Delhi, and here are our first impressions.

In terms of design, there's not much difference between these two smartphone models. While the rear panels of both phones are made of plastic, the F205 has a subtle matte finish that looked much more premium than the glossy chrome of the S11 Lite, at least to us. While both phones have 18:9 aspect ratio screens with the same HD+ (720x1440 pixels) resolution, the Gionee F205 sports a smaller 5.45-inch display while the Gionee S11 Lite gets a bigger 5.7-inch panel. As a result, the F205 is compact and has a better feel in hand, but the S11 Lite is comfortable enough.

The fronts of both the F205 and the S11 Lite, like other 18:9 phones, have no physical buttons. There are on-screen Home, Back, and Overview navigation buttons. The F205 has a 5-megapixel front camera above the display meant for taking selfies and making video calls. The S11 Lite gets a substantially upgraded 16-megapixel front shooter. With the usual beautification and bokeh modes in software, the cameras on both seem decent enough for their respective price segments. There is also real-time bokeh mode that allows you to blur out the background as you decide which angle to take your selfies from. Group selfie mode allows for a wider angle to get more people into a frame.

On the back of the F205 is a regular 8-megapixel rear camera. On the other hand, the S11 Lite gets a 13-megapixel primary sensor and a 2-megapixel depth sensor. Both phones seemed to take decent shots in good indoor lighting, but we weren't able to test low-light performance at the launch event. Stay tuned for our full review of each phone to see our extensive camera performance tests. 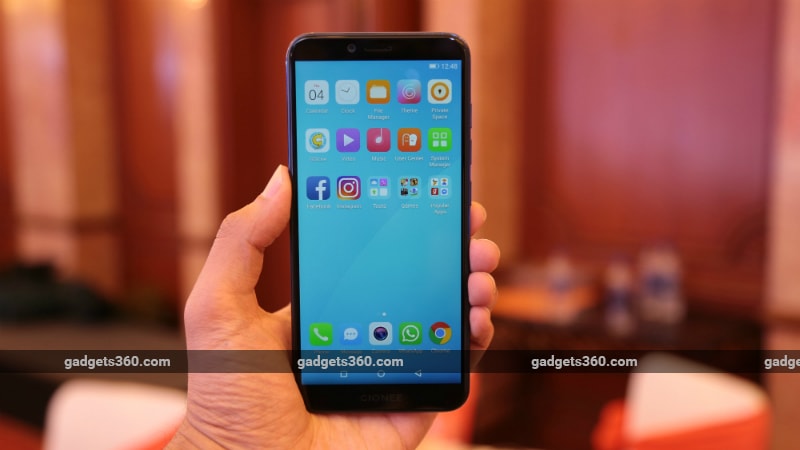 There is no fingerprint sensor on the Gionee F205, but there is a rear-mounted one on the more premium S11 Lite. Both models have the volume and lock/ power buttons on their left while the SIM trays are on the right. The F205 can take two Nano-SIMs and one microSD card, but the S11 Lite has a hybrid dual-SIM design. Both phones have Micro-USB ports, 3.5mm headphone jacks, and the usual speaker grilles on the bottom.

At the core of the Gionee F205 is a MediaTek MT6739 SoC, coupled with 2GB of RAM. The S11 Lite gets a Qualcomm Snapdragon 430 SoC, paired with 4GB of RAM. In the brief time we spent with both units at the launch event, there seemed to be no noticeable lag or stutter, and the preinstalled apps worked smoothly on both. We were impressed with the performance of the fingerprint sensor on the Gionee S11 Lite.

There is 16GB of inbuilt storage on the F205 and 32GB on the S11 Lite, both expandable substantially using microSD cards. However, Gionee's Amigo OS adds a lot of bloatware to both smartphones. As for battery capacities, the F205 gets a 2670mAh unit while the S11 Lite has a much larger 3030mAh battery. There wasn't enough time to check out battery performance at the launch event, and that will be tested in our full reviews, coming soon.

As for software, both phones run the same Amigo OS 5.0 skin on top of Android 7.1.1 Nougat. Gionee gave us no timelines on Android 8.0 Oreo updates which is disappointing considering the competition today. The icons and buttons on Amigo OS look funky and slightly outlandish. In an attempt to resemble Apple's iOS, Amigo OS has borrowed its icon designs for a lot of the native apps. Similarly, there is no app tray.

Both phones have several preinstalled apps such as Facebook Messenger, UC News, Gaana, Amazon, NewsPoint, and Truecaller. They also have several games including Sonic Runners, Bubble Bash 3, Danger Dash, and N.O.V.A 3. These, and the many native apps, feel like a lot of bloatware, which is a cause for concern - especially on the low-end Gionee F205 which has just 2GB of RAM. 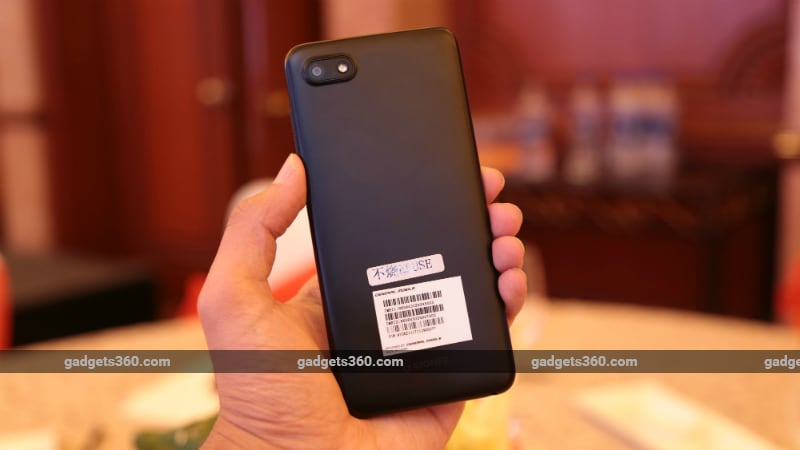 Oddly, a highly-advertised feature - Face Unlock - was absent from the demo units of both smartphones at the launch event. Apart from that, Gionee also promises other features such as like App Clone, and Private Space 2.0.

The Gionee F205 has been priced at Rs. 8,999, and the Gionee S11 Lite at Rs. 13,999. Stay tuned to Gadgets 360 for our extensive reviews of both phones, in which we will evaluate their cameras, performance, software, battery life, and everything else.