Share on Facebook Tweet Snapchat Share Reddit Email Comment
Gionee is a China-based handset maker that has now entered the Indian market. While the economy Android smartphone segment is already flooded with offerings from Indian handset makers such as Micromax, Karbonn and Lava, among others, there's always room for new entrants if they're able to offer products that deliver good quality and bring a differentiated experience.

The Gionee Elife E3 promises to offer power-packed hardware specifications including a 720p display and a quad-core processor, at a budget price in a slim form factor. Does it deliver? We try to find out in our review.

Build/ Design
The Gionee Elife E3 phone sports a slender 7.9mm frame and fits easily in your hand unlike a large number of new Android budget phones. It falls a few centimetres short of being a phablet as it features a 4.7-inch screen.

The phone comes in four different colours - White, Black, Pink and Blue. We had a Blue colour phone as our review unit. Its 4.7-inch screen dominates the front of the phone. The three capacitive buttons - Menu, Home and Back, are located just below the screen while the earpiece, a 2-megapixel front camera and the usual sensor are placed above it. 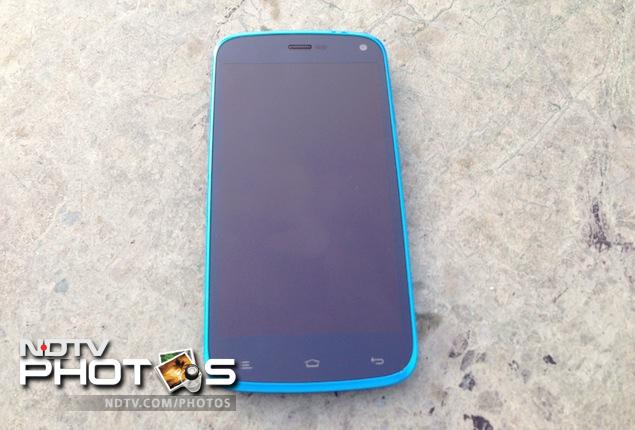 A thin blue coloured frame surrounds the front bezel. The volume rocker key and the Power/ Screen lock key are also blue in colour and located at the right side of the phone, while the left side is all clean. The 3.5-mm headset jack and the Micro-USB port sit at the top. There are no ports at the bottom of the handset.

The back features a removable cover that sports a rubberised matte finish though the shade of blue used gives it a metallic look. It feels good to hold the phone and we did not notice any creaks or wobbles. The back also features the 8-megaixel rear camera that sits right at the top with an LED flash. The camera lens is pretty small compared to other phones in the market and doesn't take up much space. You'll also see some Gionee and DTS sound branding at the back. 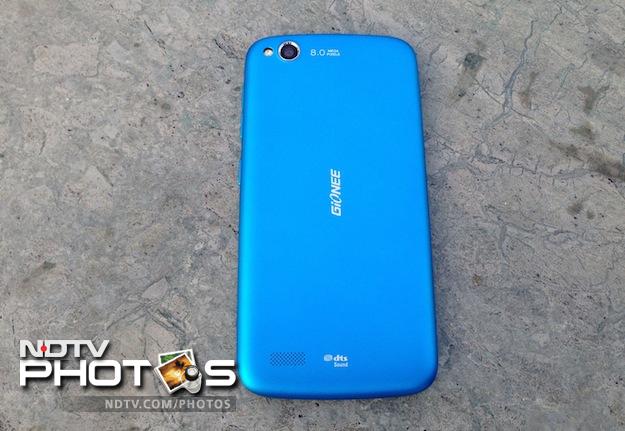 As we mentioned the back cover is removable and hides the battery compartment, a microSD card slot, a micro-SIM slot and a conventional SIM card slot.

Overall, we'd say the phone is one of the better looking budget Android smartphones we've seen in the recent past.

Display
The Gionee Elife E3 comes with a 4.7-inch IPS HD screen that has a resolution of 720x1280 pixels, packing 312 pixels per inch, which is pretty good and graphics and text appear sharp. The viewing angles were also good, and the under-sun visibility on the phone was decent. The screen is not very reflective. Videos and pictures looked good and we found the screen to be bright and vivid.

Software/ Interface
The Gionee Elife E3 runs Android 4.2.1 Jelly Bean. The handset maker has put a custom 'Nova' skin on top of the UI and offers themes that let the user customise the phone's home screen, app icons, phone dialler and messaging apps, and even the lock screen. This is similar to mobile phones from other Asian companies such as Huawei and Xiaomi, which is famous for its MIUI custom Android software. However, Gionee also lets users select a theme that is close to the stock Android experience though a number of UI elements still remain skinned. Since we prefer the 'Android' theme, we'll mostly talk about UI features part of this theme.

With the 'Android' theme, you'll also get lock-screen widgets, an Android 4.2 feature. You can choose from the Clock, Camera, Gmail, Google Now and Messaging widgets in addition to widgets offered by third-party apps installed on your phone. These widgets offer glance-able information from the apps and allow users to perform certain app actions even when the phone is locked. 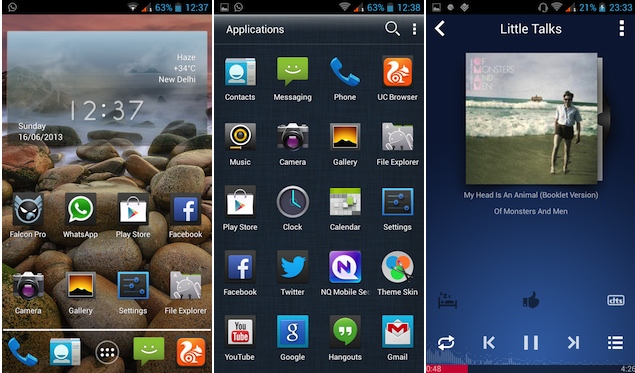 The phone allows you to choose different wallpapers or backgrounds for the phone's lock screen, home screen and even for the app launcher.

The Gionee Elife E3 offers nine customisable home screens that can be filled with app shortcuts and widgets. You can reduce the number of home screens to a single screen as well. A pinch gesture on the home screen brings up this option.

The phone features three capacitive buttons for navigation - Menu, Home and Back, for respective functions with Home button doubling up as the task switcher on long press. We'd like all manufacturers to switch to the three soft controls that are included in the Stock version of the OS. One major gripe with these buttons is that they don't light-up in the dark even when the screen is on until you press one of them.

The phone's Settings menu offers a tabbed interface with Common Settings in one tab and All Settings in the other one.

Some of the native apps offer extended functionality. For instance, the Music app allows you to put a sleep timer, if you like falling asleep while listening to music. The phone dialler allows you to record voice calls. Most Android phones don't offer this feature though this functionality is offered by some third-party apps that have certain limitations and don't offer good quality recordings. The phone also allows you to set a sleep timer to turn the phone off/ on or in Airplane mode.

There are a few rough edges here and there. The bundled game has a Chinese interface and some native apps had incorrect spellings.

Camera
The 8-megapixel autofocus shooter takes decent quality images in daylight. However, we observed that pictures taken in low-light conditions did not come out that well. Pictures taken indoors with less light were also grainy. 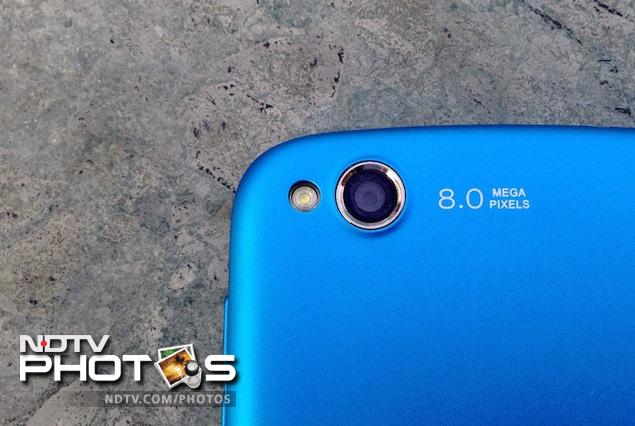 The phone can record HD videos and we found that the quality of videos captured through the back camera was good. It also offers EIS or Electronic Image Stabilization to minimize distortions caused by shaking of hands while shooting a video. Unfortunately, just like the Zen Ultrafone 701 HD, the camera saves videos in the archaic .3GP file format. 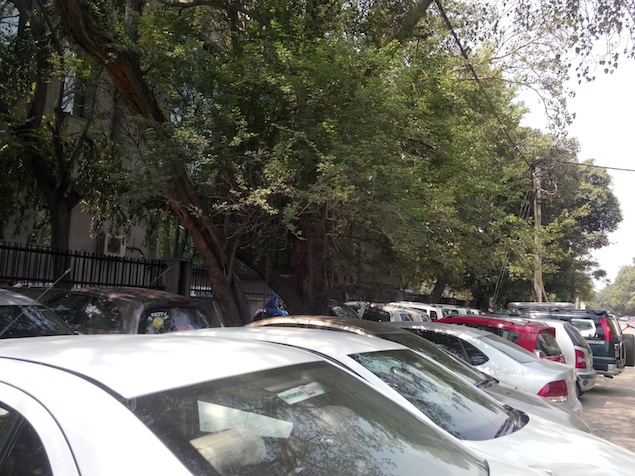 The phone comes with a customised Camera app and allows you to capture photos in HDR and Panorama modes as well. It comes with the usual controls including settings for Exposure, Colour effect, White balance and ISO, among others. The phone's camera also supports continuous shots taking up to 99 shots in that mode, smile detection and face detection. It also comes with a Phone Booth setting that lets you superimpose fancy picture frames with photos. This feature takes us back to 2007 when this was a standard feature! In addition to this it also features Colour effects or filters. 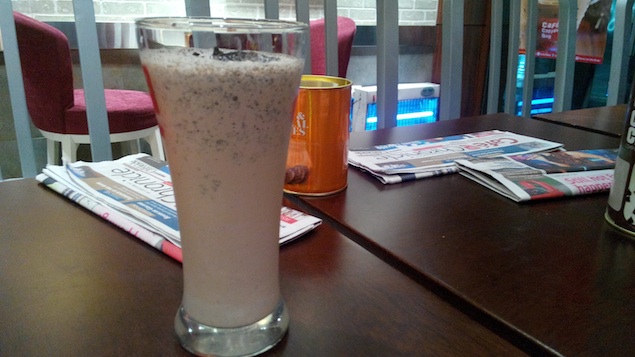 The 2-megapixel front camera takes above average shots and is great for video calls. Overall, we feel that the phone's good for casual photography but don't expect professional quality photos.

Performance/ Battery Life
The Gionee Elife E3 is powered by a 1.2GHz Mediatek MT6589 quad-core processor. It has 1GB RAM onboard, and PowerVR SGX 544MP GPU. The phone offers 16GB of internal storage, which is expandable by another 32GB via a microSD card. It's worth pointing out that most budget Android phones offer 4GB internal storage. While storage can be expanded by using a microSD card, most phones don't allow users to install apps on external storage without rooting.

With Android Jelly Bean, the overall experience of navigation through the interface was impressive, thanks to Project Butter and the phone's quad-core processor. We did not experience any lag while launching apps, playing games, scrolling web pages or switching between apps. It is safe to say that performance wise, the phone trumps most dual-core processor powered phones in this price range and matches the performance offered by the Zen Ultrafone 701HD which we reviewed recently.

We were able to play full-HD clips smoothly and the phone supported formats like .AVI and .MOV, natively. The speaker on the phone delivers decent quality sound at high volume levels, but there's some muffle when the phone lies on its back, as the speaker grill is located on the back. The headphones that come with the phone offer average quality sound output though they look good in the Red and Black colour. The phone also offers FM Radio and FM radio recording. It also offers Audio Profiles to quickly switch between different sound settings. 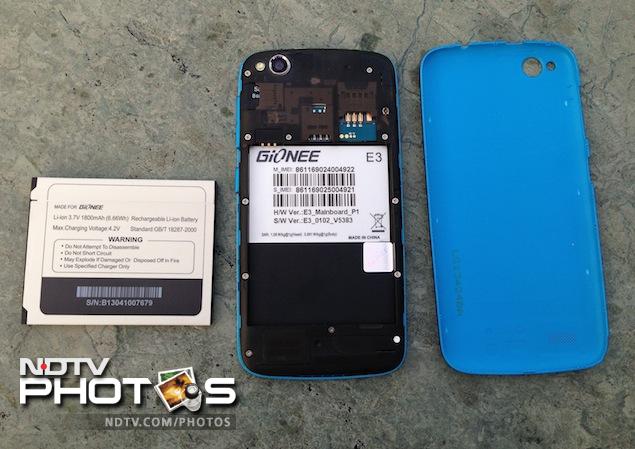 Call quality was good. The phone was also able to get a GPS lock easily while using the Maps app.

The Gionee Elife E3 comes with an 1,800mAh battery, and based on our experience, it will not last you a full day with medium to heavy usage, including 1-1.5 hours of phone calls, two e-mail accounts with push notifications, screen at maximum brightness, playing some music and video clips, Twitter notifications and WhatsApp chats, and you'll need to charge it after 8-10 hours of use. It's also worth pointing out that we had turned off Wi-Fi and auto-brightness, and the phone was hooked to a 3G network. Altering these settings might help in running the phone for a longer duration, depending on your usage pattern.

The phone's underwhelming battery life is a problem area but it also offers a Power Saving mode that limits Processor use and turns of data sync with the phone's screen. You might be able to get some extra hours with this setting at the expense of the phone's functionality.

Verdict
At a price of Rs. 14,999 the Gionee Elife E3 is a competent budget smartphone that delivers good performance. In addition to its 720p display, the major selling point of this phone is its slim profile and the fact that it runs the most recent iteration of Android. We hope that the phone doesn't disappoint when it comes to offering OS updates in the future. Our major grouse is with the phone's underwhelming battery life. Another issue we're concerned about is after sales service. Although the company appears to have set up service centres at all major locations in India, one can't deny that it's a new player in a market that's home to established budget phone brands like Karbonn and Micromax. 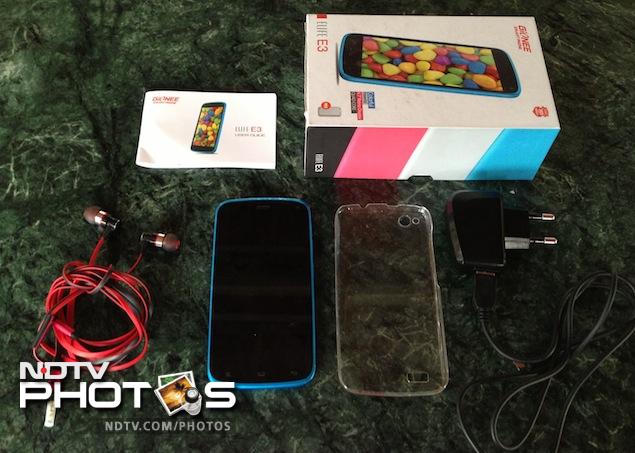 You could also look at the Zen Ultrafone 701HD (Review | Pictures) that costs about Rs.3,000 less and offers a great experience though it comes with a lower internal storage capacity of 4GB. The Micromax Canvas HD (Review | Pictures) is also a decent option though we're not big fans of its build quality.

product The Gionee Elife E3 is a good looking Android smartphone that brings a quad-core processor and a 720p display to the economy segment.