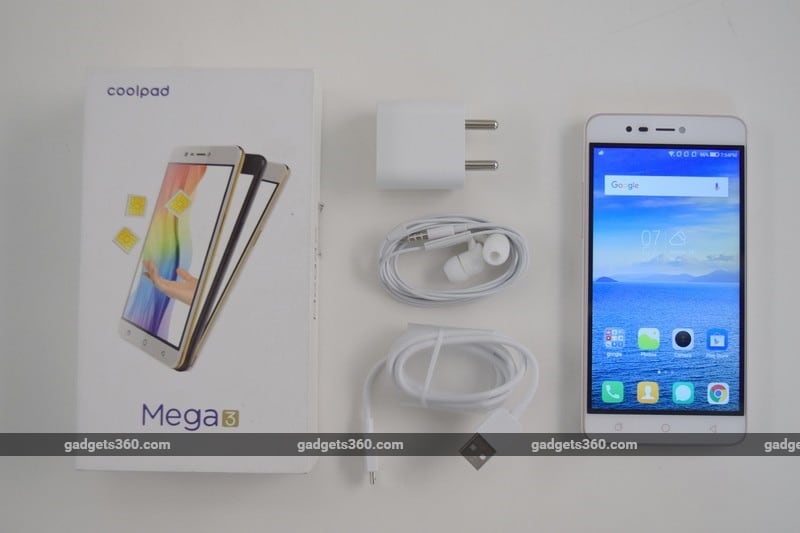 Triple-SIM phones aren’t very common, but it isn’t hard to imagine that there might be plenty of situations in which they’re needed. You might use multiple different carriers because of poor signal availability or favourable offers and pricing schemes, or you might need to keep accounts for different purposes separate. You might also like to use a local SIM when travelling without disrupting your regular routine.

Coolpad is one of the few manufacturers to offer such a smartphone, the new Coolpad Mega 3. More interestingly, it’s priced at just under Rs. 7,000, which means that in a crowded market with little differentiation between models, this phone has a totally unique potential selling point. On the other hand, low-budget phones generally only do a few things well at the cost of others.

Interestingly, while the Mega 3 comes a few months after the launch of the Coolpad Mega 2.5D (Review) and costs exactly the same amount, it isn’t exactly a successor model. The Mega 2.5D was so named for its curved-edge glass front, and the Mega 3 seems to get its name from the triple-SIM feature. Let’s see whether this unique advantage is offset by too many compromises.

Coolpad Mega 3 look and feel
This is a rather large, chunky phone, and it’s pretty heavy too at 170g. Hilariously, Coolpad actually markets this phone as “feather light”, when it’s way heavier than average. It’s all plastic, with a removable rear shell. The overall shape fits nicely in a palm, but the ribbed texture of the rear didn’t feel very comfortable. One-handed usage isn’t easy but at least the Coolpad Mega 3 doesn’t slip very easily.

Our review unit was white with a surprisingly subtle gold trim. It does not have the curved-edge glass front of the Mega 2.5D. You’ll see a flash next to the front-facing camera, which is one of the other features that this phone boasts of. Lower down, the Android navigation button icons are printed in gold below the display, and aren’t backlit. There’s a Micro-USB port on the bottom and a 3.5mm audio socket on top.

On popping off the rear shell, you’ll immediately see three Micro-SIM slots arranged around the camera sensor. The battery is visible, but not removable. If you look carefully, you’ll see a separate microSD card slot right at the bottom. This is particularly interesting because with so many dual-SIM phones going hybrid and forcing you to give up one SIM slot if you need a microSD card, this phone lets you use all four without any sharing.

Overall construction quality feels alright for a low-end budget phone. Clearly this isn’t the sleekest model around, but that’s the tradeoff you make for its features and price.

Coolpad Mega 3 specifications and features
The 5.5-inch screen has a resolution of 720x1280 which isn’t bad at all. We’re glad to see that this resolution has become the norm even in the budget category. Sharpness and viewing angles are both quite good, and you shouldn’t have any problems enjoying videos. Legibility outdoors under direct sunlight was the only minor problem.

The processor is a relatively modest MediaTek MT6737, which has four ARM-A53 cores running at up to 1.2GHz and integrated Mali-T720 MP2 graphics capabilities. There’s 2GB of RAM and 16GB of fixed storage. You can add a microSD card, but the phone only supports capacities up to 64GB. While those specifications are all bare basic, the battery has a relatively generous capacity of 3050mAh, which at least partially explains the weight.

Both cameras have 8-megapixel sensors and LED flashes. The Coolpad Mega 3 supports Wi-Fi a/b/g/n, Bluetooth, FM radio, and GPS. 4G and VoLTE are supported on all three SIMs, one at a time. There’s no fingerprint sensor and no support for quick charging.

On the software side, Android 6.0 is buried under Coolpad’s CoolUI 8.0 skin. It’s a single-layer UI with no app drawer and lots of customisations. You have to swipe upwards from the bottom of the screen, iOS style, to pull up quick settings and shortcuts to apps – thankfully, these are all configurable. The notifications shade is neatly laid out, and even the Settings app has been given an overhaul. Interestingly, you can swipe between homescreen folders from within any of them.

Coolpad has preloaded quite a few apps including UC Browser, Amazon, Zumei Weather, WPS Office, and Touchpal 2015 Keyboard. Cool Manager offers a few cleanup and privacy tools, and lets you check things like power and data consumption. There’s also a Cool Store which is presumably an app store and Cool Service which is supposed to help customers locate and contact service centres, but neither of these worked at all during our review period. All of Coolpad’s apps required loads of permissions including the ability to make phone calls, which we think is unnecessary.

Coolpad Mega 3 performance
While using the Mega 3 isn’t unpleasant by any means, you can immediately tell that this phone doesn’t have a lot of power. It’s hard to determine whether this is because of a weak processor or heavy software, but there is a slight sluggishness when opening apps and switching between them.

However, videos play smoothly, and even media streamed over Wi-Fi looks crisp and smooth. The display is large and sharp enough to make watching anything enjoyable. Casual games are also perfectly enjoyable, and surprisingly even Asphalt 8 ran quite well. The phone’s single speaker is not very good, and sound comes out tinny and compressed quite harshly.

Benchmarks showed mediocre scores such as 29,604 ovreall in AnTuTu, 1,440 in Geekbench 4’s multi-core test, 4,332 in 3DMark Ice Storm, and just 10fps in GFXBench’s T-rex test. Our heaviest browser-based test, BaseMark Web, could not run to completion.

The front and rear cameras both have 8-megapixel sensors, but quality is markedly different. The rear camera takes surprisingly good closeup shots in daylight, with sharply defined details and decent depth. However, quality deteriorates rapidly when the distance to the subject increases and also when ambient light reduces. Landscape shots taken in sunlight showed poor exposure control and a total lack of detail. Shots taken indoors were noisy, while those taken outside at night were either completely black or had extremely poor detail.

The front camera was good with selfies, although lighting also played a huge role. The front camera defaults to “beauty mode” which tries to guess your age and throws up descriptors ranging from “diligent” (which makes no sense) to “nymph” to “heartthrob”. The front flash isn’t available in this mode – you have to find the iOS-style switcher and go to the regular photo mode. Video recording tops out at 720p for both cameras, and the quality is just about usable for casual occasions.

Battery life was very good, with the Mega 3 lasting 10 hours, 11 minutes in our HD video playback test. We were able to go well over a day with moderate usage, involving some video streaming and gaming. However, it did take a long time to charge, and the supplied charger is rated at only 1.5A.

Verdict
When a low-cost phone claims to have one standout feature, it usually means that other aspects of it are going to be disappointing. With the Coolpad Mega 2.5D, looks were the top priority and performance suffered pretty much across the board. This time around, Coolpad has given the Mega 3 its own unique feature, but not at the cost of core functionality.

Camera performance could certainly do with some improvement, the CPU is relatively weak, and the software is desperately in need of a diet. Still, this is a budget phone and our expectations weren’t that high to begin with. On the other hand, the display quality, battery life and overall look and feel are all very good.

At this price, the Mega 3 goes head-to-head with the Xiaomi Redmi 3S, which has a far superior processor, better cameras, and a bigger battery. There’s also the fact that if you can spend just a little more money, you’d be happier with phones at the Rs. 8,999-9,999 mark, which are generally better all-rounders. However, the Mega 3 lets you use three SIMs, so if that appeals to you more than anything else, the compromises aren’t impossible to live with.