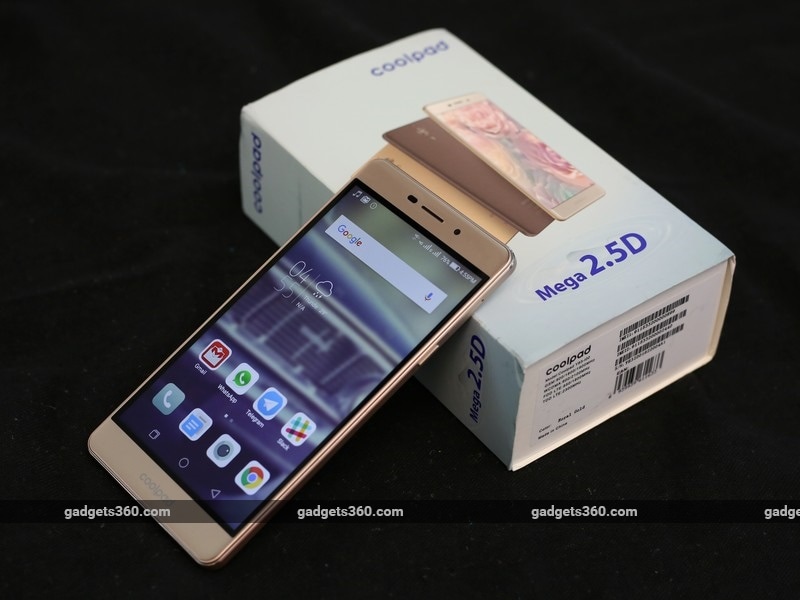 While the battle for supremacy in the sub-Rs.15,000 smartphone segment rages on, there's a new one brewing in the sub-Rs.10,000 price bracket. Xiaomi recently added fuel to the embers when it launched the Redmi 3s and Redmi 3s Prime (Review), two excellent options that deliver great bang for buck.

Coolpad, another Chinese company known for disrupting the budget segment, announced its answer to Xiaomi's offering with the launch of the Mega 2.5D. Available only through the flash sale model for now, the Mega 2.5D is a selfie-focused smartphone with big emphasis on design. Although it might seem like major competition for the Redmi 3s, we feel the Mega 2.5D is poised to be an alternative for those looking at a larger display in this segment.

But is it any good? Can Coolpad's new offering make a strong enough case for it to sway buyers away from the obvious choices here?

Design and build
The Mega 2.5D is certainly an attractive looking phone in its gold avatar and we can see Coolpad has paid close attention to the build as well as fit and finish of the chassis. The 2.5D in its name refers to the curved glass on top of the display. This is manufactured by NEG (Nippon Electric Glass) and we can expect a certain degree of scratch protection. There are black bezels on the either side of the display, which creates a nice illusion of an edge-to-edge panel when the screen is off.

The 5.5-inch display has to make do with HD resolution, which is fairly common in this segment. However, due to size of the display, the pixel density is a bit low which manifests as jagged edges around text. It's not too prominent but is definitely present. There's a notification LED on the top and onscreen navigation buttons, so you save some space at the bottom.

The Coolpad Mega 2.5D is not a very easy phone to live it as its size makes it impossible for single-handed use. Thankfully, it's not too heavy (143 grams) and fairly slim. The phone has a metal frame but the entire back is made of plastic. Other than the screen, the rest of the phone doesn't attract fingerprints so it's easy to keep it clean. The buttons feel responsive to touch and their placement is fairly ergonomic.

The hybrid SIM tray is placed on the right while the headphone and Micro-USB ports take their place on the top and bottom respectively. The back has a slight curve, which makes it feel less of a slab in your hand. There's a camera module on the top and a speaker at the bottom. The problem with the rounded back is that it blocks the speaker completely when it's placed on a flat surface, there by muffling any incoming alerts.

The camera module juts out a bit too which could scuff the paintjob after prolonged usage. The Coolpad Mega 2.5D ships with a 7.5W power adapter, data cable, and headset. The phone has good aesthetics and is built well. There's no fingerprint sensor here but that's forgivable given the price.

Specifications and software
Under the hood, we have a MediaTek MT6735P quad-core SoC, which honestly, isn't the best choice in this day and age. Any other budget chipset from Qualcomm (expect maybe the Snapdragon 410) would have been welcomed here. Coolpad also throws in 3GB of RAM, which no one else does at this price point, yet. However, having more RAM doesn't mean better performance and the benchmarks reflect this. AnTuTu returned only 24667 points while GFXbench's T-Rex test gave us just 8fps, which is very weak.

The rest of the specifications include 16GB of storage (expandable by up to 32GB), Wi-Fi b/g/n, Bluetooth 4.0, USB OTG, FM radio, and GPS. The phone also supports 4G on both SIM slots for Indian bands.

Android Marshmallow is completely unrecognisable with Coolpad's CoolUI 8.0 skin running on top. The changes are a bit excessive and quite unnecessary if you ask us. Swiping up from below brings up Control Centre, which has brightness control, a row of shortcuts to apps, and customisable toggle switches for pretty much everything you'll need. There's also screen recording baked into the firmware.

C-button is similar to Xiaomi's Quick Ball implementation, which gives you a floating circular overlay which sticks to the edges of the display. Pressing it opens up a carousel of shortcuts which you can flick through. It has its uses if you want to navigate Android with one hand, but other than that, it can be annoying as it tends to get in the way of what you're doing.

There are some UI design choices we wish were done differently. For instance, the notification shade is translucent which makes it impossible to read an email notification without having to open the app. There's no quick way to control the music player from the home screen either. The theme app that's bundled with the phone is pretty poor too as the choice is very limited and even the themes you get aren't too pleasant to live with. Plus, some themes tend to break basic functionality of Android, which makes them all the more frustrating.

Bundled apps include Transfer, for migrating your data to another phone over Wi-Fi; Cool Manager, which lets you block calls, manage data traffic, and lock apps; Cool Service, which shows you nearby service centres; Rock Wallpaper, which randomises your wallpapers; and Cool Store, which was added in the most recent build (V019), lets you shop for apps, games and presents you deals on random products.

Performance
Display performance is quite good in terms of colour reproduction and sunlight legibility although the ambient light sensor is a bit slow to react at times. Touch response is not the best as on many occasions, the phone refused to register our input. Call quality is good but the volume level of the speaker is too weak for a telephone call. The phone runs cool mostly, however the back and the display gets very warm when using the camera. We tested this with two different Coolpad Mega 2.5D units, and they behaved in the same fashion, so we can rule out the possibility of it being a faulty unit.

CoolUI 8 is pretty snappy at first but after setting it up with a few apps and games, the performance isn't great. There's sporadic stutter that bogs the phone down quite often, whether you're simply unlocking the device or trying to switch to another app. The heavy skin coupled with the weak chipset is most likely the culprit here, and there's nothing the 3GB of RAM can do to save the day. There's quite a bit of micro-stuttering in the transition effects too.

Another annoyance is the notifications for Zuimei weather and headphone jack alerts, which cannot be dismissed and end up cluttering the notification shade. Also, the latest update seems to have introduced a new bug where the GPS icon constantly flashes, despite killing all apps that use it. Google's Now on Tap doesn't work too, even though you can enable it. Coolpad says that functionality should come in a future update.

The Mega 2.5D can play back full-HD videos but once again, audio performance through the speakers is very poor. Audio quality is better through the bundled headset. The phone has a custom music player called Coolmusic that is functional, and also includes many equaliser presets for tweaking your music.

The phone has 8-megapixel cameras for the front and rear, both of which do an average job at best. The camera app is simple and easy to use. You can swipe up or down to switch between shooting modes like Video, Beauty, Night, and Pro. You also get Panorama, Sound and Shot, and GIF modes. Focusing speeds are slow and due to the shutter lag, you need to be very steady to get good picture. Macros have decent levels of detail although objects that aren't in focus tend to have a halo effect around them.

Landscape shots lack good detail and objects appear a bit fuzzy when you zoom in, even in daylight situations. Low-light performance is pretty weak, as expected from phones in this price segment. Video recording maxes out at 720p, which once again, is only usable if you shoot in good lighting conditions. For a selfie phone, the camera app lacks any added features like gesture or voice capture. You do get Beauty mode with different levels of facial enhancement options, but overall it could have been done better. The quality of the front camera is good, even indoors.

Our video loop test gave us a score of 8 hours and 27 minutes which is not bad. However, during actual usage with two SIMs active, we barely managed around 17-18 hours before the battery icon turned orange. Even with a single SIM card, we got similar mileage. Coolpad includes a Long Standby power saving option that replaces the stock launcher with a basic one that only lets you access messages and calling. However, this doesn't seem to do anything to prolong the battery life as it appears to simply change the launcher without actually shutting down unwanted processes. Another thing we don't get is why did Coolpad not put in a larger battery? Given the size of the phone, we would have expected at least a 4000mAh battery.

Verdict
The Coolpad Mega 2.5D looked quite promising during our first encounter but after using it for the better part of a week, we're left feeling disappointed. The phone has the makings of being a very good large-screen alternative to the Redmi 3s, but poor choices in components is what holds it back.

We're talking mainly about the chipset and the battery, both of which ruin the experience of the phone. To add to its woes, the heavy skin on top of Marshmallow feels unnecessarily bloated and sluggish due to the weak processor. Camera and battery life are other areas where the Mega 2.5D stumbles.

The aesthetics are probably the only good thing about the phone, but then you don't buy a device based purely on looks. We hope to see a refresh of the Mega 2.5D with a more modern CPU, bigger battery, and a more optimised interface as we do feel such a device has a good chance of success at this price point, provided it ticks all the right boxes.

For now, your best bet in this range remains the Xiaomi Redmi 3s, with the Lenovo Vibe K5 Plus (Review) coming in at a close second.