Coolpad Dazen X7 Review: Trying to Punch Above Its Weight

Werecently reviewed the Coolpad Dazen 1 (Review), a budget workhorse. Coolpad has another, more expensive, phone which sells for just under Rs. 20,000 - the Dazen X7. This phone has an octa-core Mediatek MT6595M processor, which we haven't tested yet. Moreover, the design of the Dazen X7 incorporates metal edges on a  predominately glass body to create a premium look.

Let's find out if the Dazen X7 can distinguish itself to be a serious contender, especially in a market flooded with options. We are really interested in what Coolpad, known primarly for being an OEM, can do when it starts promoting its own devices instead of avoiding the limelight. 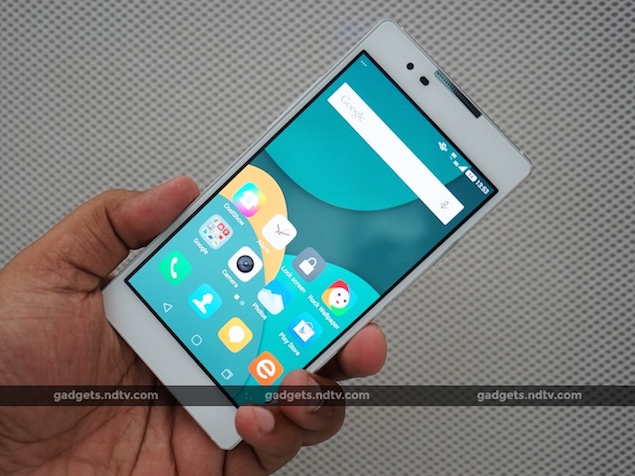 Look and feel
At first glance, the candybar design of the Dazen X7 seems impressive thanks to its chamfered metal edges and glass back. It has great build quality and feels sturdy. Our white review unit literally glistened in the light and caught a lot of reflections on the glass as well. With dimensions of 146.6x73.6x6.5mm, the Dazen X7 is not too big to for a phone with 5.2-inch screen, but the sharp edges dug into our palms when we were holding it. The 131g weight feels reassuring. As far as phones with 5.2-inch screens go, we still think that Motorola hit the nail on the head with the Moto X (Gen 2) (Review | Pictures) with respect to the ergonomics.

On the rear, the primary camera and flash are placed on a metal plate that juts out, which makes them susceptible to scratches. The right side of the phone has two slots, one accepts a Micro-SIM card whereas the other is a Nano-SIM slot that doubles up as a microSD card holder. This side also has the power button. The volume rocker lies on the left. Both buttons have sufficient tactile feedback. 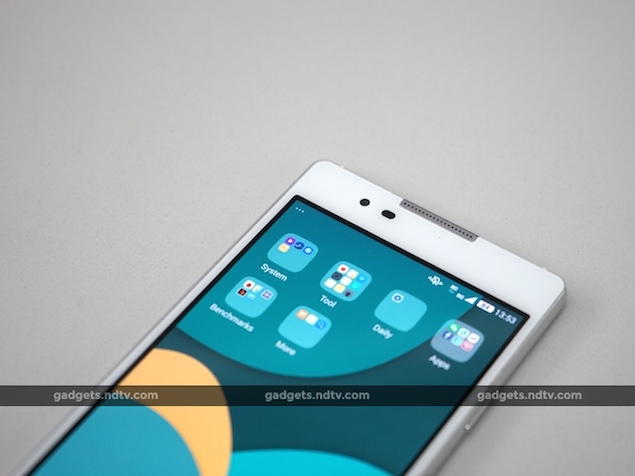 The 3.5mm jack and a microphone are on the top of the Dazen X7. The bottom has the Micro-USB port and two rows of machine-drilled holes on either side. The phone has a mono speaker therefore only the right side emits sound. In fact, in an anomaly that could be specific to our review unit, the holes hadn't been punched all the way through on the left, which looked odd to say the least. The earpiece is above the screen along with the proximity sensor, ambient light sensor, and front camera. Coolpad makes use of on-screen buttons for navigating through the operating system.

Specifications and software
Coolpad uses an octa-core Mediatek MT6595M SoC clocked at 1.7GHz with PowerVR G6200 graphics. The MT6595M is a toned-down version of the MT6595, which we tested first on the Lenovo Vibe X2 (Review | Pictures). The phone also has 2GB of RAM and 16GB of internal storage space which can be expanded by up to 32GB using a microSD card. It also supports USB OTG, if you run out of space.

The 13-megapixel primary camera has a fast aperture speed of f/1.8 and can shoot 1080p videos at 60fps. On the other hand, the front camera can capture 8-megapixel selfies. The Dazen X7 can connect to Indian 4G networks but only using the primary SIM. Other connectivity options include Wi-Fi a/b/g/n, Bluetooth 4.0, and A-GPS.

The 5.2-inch Super AMOLED screen has a resolution of 1080x1920 which translates to a pixel density of 441ppi. It is rich in colours but has a warm tone. The sunlight legibility of the phone is pretty good but when viewed at any angle, the colours start degrading. Our only gripe with the display is that it doesn't extend up to the bezel of the phone, thereby creating a black border that looks really distracting. 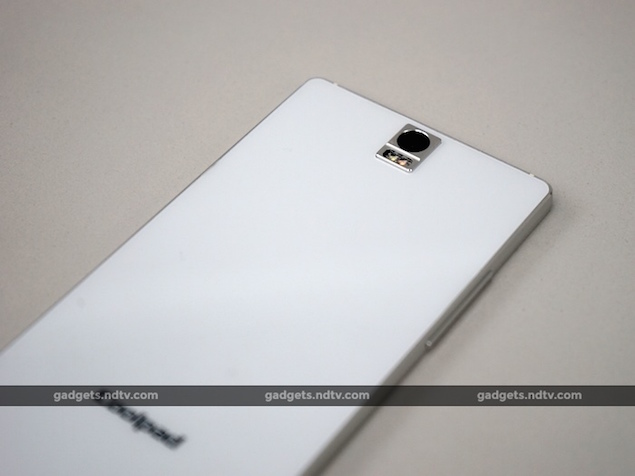 The Coolpad Dazen X7 runs the now-outdated Android 4.4.2, with a custom skin on top. Like the Dazen X1, even the Dazen X7 gives users the option to switch between a traditional Android layout with an app drawer or one without it where all the applications - default and downloaded - are lined up on the home screens. The icons have a flat, colourful design. The most annoying thing about the custom skin is that the capacitive buttons can be pulled up or hidden by swiping up or down, respectively, from the bottom of the display. Many times, when trying to perform this action, we would accidentally hit one of the icons in the dock instead, which would then open the corresponding app. Also, all the notifications are bunched up inside the notifications shade thereby adding an extra step to the process of dealing with any particular notification.

Smart control options in the skin allow users to double-tap to wake the phone, or jump directly into specific apps by tracing gestures - like M to play music or C to open the camera. A theming app called Coolshow is available for customisation. Coolstore is a curated app store by Coolpad, although it is pretty barren at the moment. Other third-party apps include WeChat, Whatsapp, Snapdeal, Facebook, Swiftkey and WPS Office.

Performance and camera
While we didn't face any slowdowns during our test period, the phone did heat up when we played games and ran intensive benchmarks. That aside, the MT6595M proved to be a pretty capable SoC and the benchmark numbers also show that.

In AnTuTu and Quadrant, the phone scored pretty high scores of 44,854 and 17,089 respectively. In fact, the AnTuTu score is within touching distance of what the OnePlus One achieved. Even the 3DMark Ice Storm Unlimited and GFXbench scores of 12,780 and 18.3fps were fairly impressive. 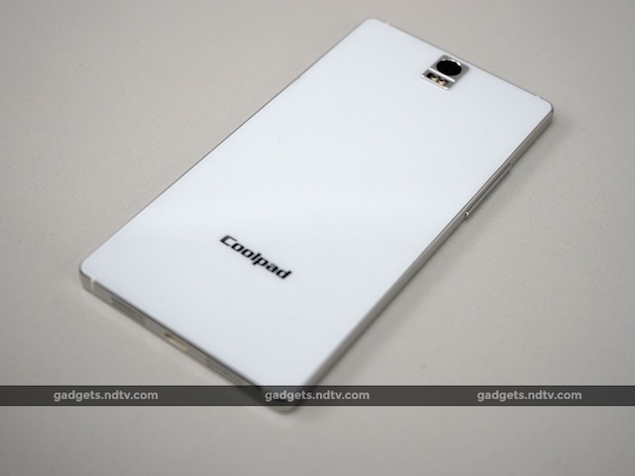 The phone played all the videos we threw at it without any fuss. The sound from the loudspeaker was pretty tinny and low, and also crackled at high volume. Our review unit's box didn't include a headset so we used our own to test the audio quality and we had no complaints. The cellular radio struggled to latch on to a 4G network and the connection kept switching to 3G. The sound quality in calls wasn't too great either. The battery lasted 8 hours and 35 minutes in our video loop battery test, and in regular usage we managed to squeeze at most a day out of it with 4G/3G being constantly active. 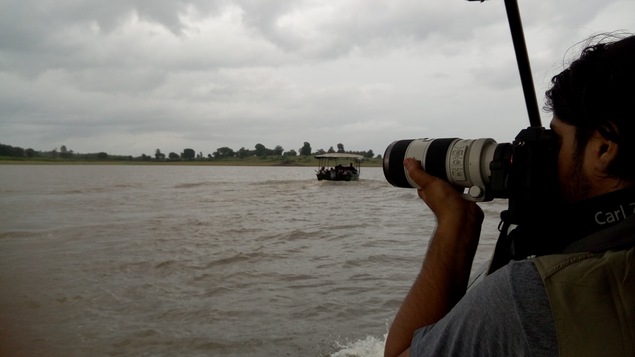 The 13-megapixel rear camera is an above-average performer. Under bright sunlight the details are pretty clear and the noise levels are also low. However if the light is even slightly dim, which we experienced a lot thanks to the overcast monsoon conditions in Mumbai, the camera struggles to expose areas under focus. The key elements in our sample shots were underexposed.

In low light situations, despite the fast f/1.8 aperture, the camera tends to generally lower the ISO and shutter speed to around 1600 and 1/10 respectively. This means that the resulting images are blurry and full of noise because the camera cannot handle shakes. Thankfully, the camera app has a Pro mode that gives users full control over the ISO and shutter speed settings. The 8-megapixel front camera on the other hand is great for selfies. The video quality of both the cameras is average at best. 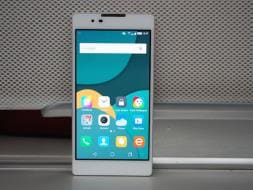