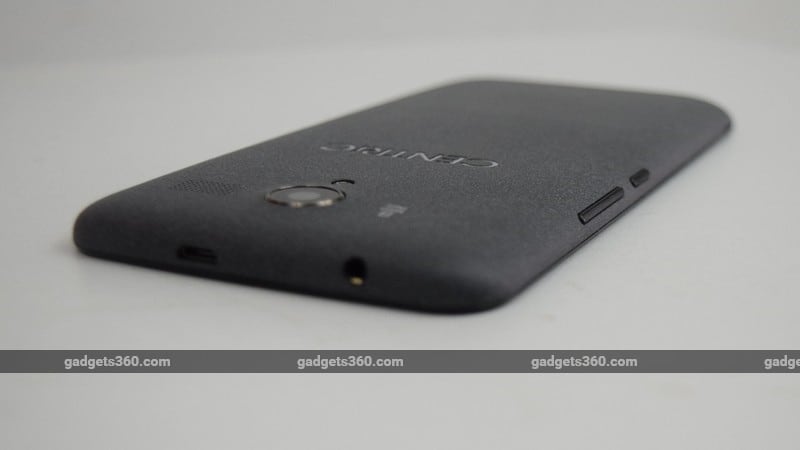 The sub-Rs. 10,000 smartphone segment is bursting at its seams. We have seen tons of brands jumping in trying to shake off established players. One such entrant is Centric, a smartphone brand launched by Mumbai-based distributor Priyanka Telecom. The brand has launched multiple phones in this segment, and one such model is the Centric G1. We put this device through its paces to see if it's worth your money.

One of the first things about the Centric G1 to grab your attention is the sandstone finish on the back panel. We last saw such a design on the OnePlus One (Review) which was quite unique at that time. The Centric G1 has a 5.5-inch display with what the company calls "Dragon Glass" for protection. There are non-backlit capacitive touch buttons below the display. Just above it is 5-megapixel front-facing camera and a recessed earpiece. We didn’t quite like the positioning of the power and volume buttons on the curved edge of the right side, because this made them hard to hit. The quality of the buttons isn’t that good either.

The phone has an 8-megapixel rear camera with autofocus and a single-LED flash. Centric has positioned the loudspeaker grille right next to the camera. The rear cover is removable and so is the 2900mAh battery. There are two Micro-SIM slots along with a microSD card slot, but none of them are hot-swappable. The Centric G1 has a 3.5mm headphone socket along with a Micro-USB port on the top, while the primary microphone is positioned at the bottom. It misses out on a fingerprint sensor which is surprising as other devices such as the Redmi 4 (Review), Micromax Evok Power (Review) and Coolpad Note 5 Lite (Review) have one.

The Centric G1 sports a 5.5-inch IPS screen with a resolution of 720x1280 pixels. It looks like the glass lacks an oleophobic coating, as this device picks up fingerprints very easily. Brightness is good but the viewing angles could have been better. The phone supports two 4G and VoLTE. It also gets Bluetooth 4.0 and WiFi 802.11b/g/n.

Like most other devices in this price segment these days, the Centric G1 is powered by a MediaTek MT6735 SoC clocked at 1.3GHz. There's 3GB of RAM along with 16GB of storage which is expandable by up to 256GB using a microSD card. The G1 runs on pretty much stock Android 6.0 Marshmallow with a few additions. The phone gets Turbo Download which allows it to use Wi-Fi and 3G/ 4G data simultaneously to increase download speeds and, in our experience, the feature worked as advertised. There is gesture control along with common shortcuts such as double-tap to wake and tracing alphabets to launch select apps.

Also, Centric has installed a few apps including Centric Store which is its own app store, and Centric Care to help users find service centres. Apart from that, there is ChillX, a content aggregator, and Parallel Space, which lets you run second instances of other apps. The near-stock Android appearance and functionality does help this phone deliver a good user experience.

We put the device through several benchmarks to gauge its performance. In AnTuTu, the Centric G1 managed 34,462, and in Geekbench's single- and multi-core tests, it returned 607 and 1732 respectively. The G1 also managed to score 14fps in GFXBench. The integrated Mali-T720 MP2 GPU manages to run casual games such as Subway Surfer and Candy Crush well, but load anything heavy and the device shows some lag. It struggled with graphics-intensive games like Breakneck. We also played Clash Royale, a card-based strategy game, which the device could handle without many issues.

The Centric G1 went on for 10 hours and 58 minutes in our HD video loop test, but charging it with the supplied 5W charger took over three hours which is painfully slow. A more powerful charger would really have helped. With light to medium use, the G1 could manage one working day. In one instance, the battery level suddenly dropped from 15 percent to zero, causing the device to shut down abruptly and without warning.

The Centric G1 sports an 8-megapixel primary camera with an LED flash, and a 5-megapixel selfie camera. The app is quite basic and is similar to the one on the Intex Elyt-e7 (Review). There is a panorama mode and a picture-in-picture mode, in addition to the standard mode and a few filters. It has HDR as well but we found ghosting in a few photos we took with the mode enabled due to a lag between the exposures being captured. You can turn Auto Scene Detection on to get slightly better photos from the phone in different conditions. This mode is not available for the front camera but you do get a beautify mode which smoothens skin in selfies.

Photos taken with the Centric G1 were a little disappointing. The device had issues with light metering and we had to take multiple shots for it to get one right. We found chromatic aberration when shooting against the light during the daytime. Objects at a distance weren’t clear and lacked detail. Macros weren't very good either, as they lacked any kind of sharpness and appeared flat.

Photos taken in low light had a fair amount of noise and there was a considerable loss of detail. With the Auto Scene Mode enabled, the phone bumps the ISO level up aggressively causing chroma noise. The Centric G1 is capable of shooting video at full-HD but we saw a minor lag in the viewfinder as well as in the output. The performance of the front camera was decent, but photos were only good enough to be shared on messaging apps.

As a budget smartphone, there are a few things that the Centric G1 does right but a lot of things that it struggles with. Performance is decent for the price and 3GB of RAM does prevent background apps from getting killed too often. However, the omission of a fingerprint sensor at this price is surprising and the amount of time needed to charge this phone might be unacceptable for some. More importantly, camera performance is below average. If you are looking to buy a phone for less than Rs 10,000, here are the options you should look at instead.