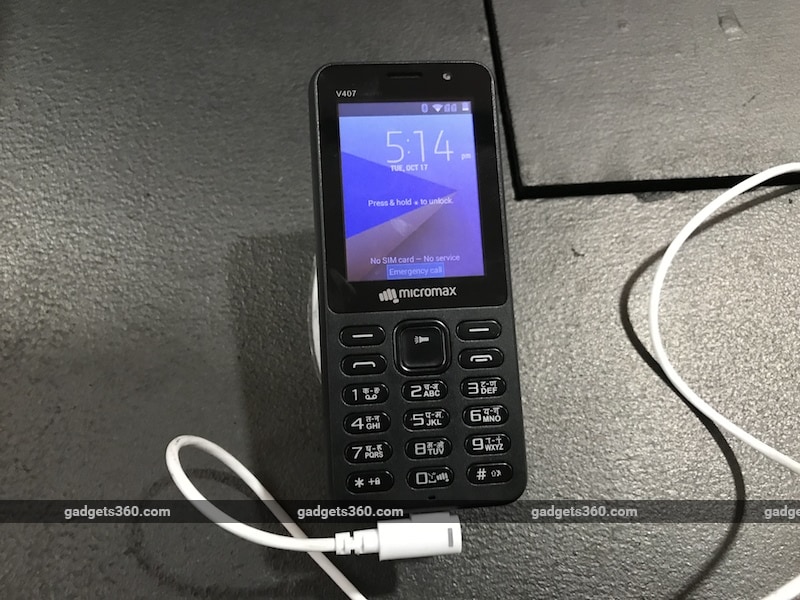 After years of manufacturers scrambling for ways to bring affordable and locally relevant smartphones into the hands of millions, it took a Jio Phone to bring feature phones back into focus. So it's no surprise that telecom operators and phone manufacturers in India are having a deja vu moment, BSNL and Micromax being the latest with the new Bharat-1, a 4G feature phone with high-speed Internet that was unveiled in New Delhi on Tuesday.

The BSNL Micromax Bharat-1 has an unassuming design - more on this shortly - but what it offers out of the box and signifies in the grand scheme of things is perhaps more appealing. Priced at Rs. 2,200 (roughly $34) and going on sale October 20, it is positioned as a solution to the needs of over half a billion people in India.

The need for affordable connectivity

So what are these needs that the BSNL Micromax Bharat-1 phone can fulfil? Let's see. Micromax's Rahul Sharma thinks that people don't want to pay for the voice calls they make and also surf countless webpages at no charge. For this, his company has partnered with state-run telecom operator BSNL. At a meagre Rs. 97 monthly tariff plan, Sharma says, customers can avail all of this with the Bharat-1.

But let's be honest. People also want to listen to music, watch videos, and stream live TV occasionally. What about those needs? Micromax says it has partnered with a range of companies including Zenga to bundle in those entertainment offerings with the phone.

Which brings us to the only question that matters: does the BSNL Micromax Bharat-1 handset live up to the expectations? The short answer is yes. A slightly longer answer is, mostly yes. We spent some time with the handset to figure out what the big deal was.

Does it live up to expectations?

From the looks of it, the Micromax Bharat-1 can be mistaken for a relic of the past. It features the classic numeric keypad and keys make unpleasant noise when you click on them. And you will be clicking them a lot as the tiny (2.4-inch), barely okay-ish display doesn't support touch input. The plastic body also doesn't feel premium, though it doesn't feel cheap either. And that in a nutshell is what the design and other aesthetics of the BSNL Bharat-1 feel like. But everything gets interesting as you long hold and release the * key.

There are several apps that come pre-installed on the new Micromax Bharat-1 handset. For Web browsing, there is a custom build of Opera Mini mobile browser. We typed in a few webpages and they loaded just fine. There is a YouTube app as well, and the display and sound quality are good enough for what a customer would be paying for the device.

The Bharat-1 isn't running Android, so there is no Google Play app store on the phone. This could be crucial to you if you were planning to download WhatsApp, the most popular messaging app in India, or most other popular app that you have been meaning to try on a phone. You will, however, be able to check Wikipedia, update Facebook statuses, read news articles, and do a range of other things using the Opera Mini browser.

There are two camera sensors on the phone as well. The rear camera, a 2-megapixel sensor and a VGA selfie camera on front, take perhaps the best images you can expect from them. Put mildly, you wouldn't want to take pictures from them unless you don't have any other phone lying around. The Jio Phone, in comparison, takes better pictures.

There is an entertainment "Fun" app on the phone as well, which we are told offer a ton of songs, videos, and provides access to over one hundred TV channels. The catalogue felt thin to us, though we admittedly couldn't browse through all the sections in the limited time we spent with the device. On the plus side, the videos run impressively well on the phone with enough clarity. The BSNL phone also supports Bluetooth, allowing users to quickly share files among themselves.

Bharat-1 supports Wi-Fi, and that's how the test unit we played with was hooked to the Internet. Combing through the Settings, we also found that this phone is capable of turning into a Wi-Fi hotspot machine. Though, we couldn't test the feature as there were no SIM cards in the test device. We also couldn't make any voice calls.

Speaking of which, the BSNL Bharat-1 comes with two SIM card slots. A Micromax representative told Gadgets 360 that users can absolutely swap the BSNL SIM cards with those from other telecom operators. Jio Phone doesn't let you do that, do note, and has only a single SIM card slot. Those of you who are planning to purchase the Bharat-1, you could want swap in an Airtel or Reliance Jio SIM card into the phone.

Even as Micromax is positioning the device as "India Ka 4G phone", it's a little ironic that the launch partner BSNL doesn't offer 4G just yet. So for the immediate future, if you want to browse the Web at 4G speeds, you would actually need a Airtel, Vodafone, Idea, or Reliance Jio SIM card to avail the facility.

"For us, this is a future acquisition strategy and BSNL has already started 4G tests and currently has a rural network that's unmatched with any existing operator in the country. Once a feature phone user shifts to 3G and discards his outdated phone, in next few months the migration to 4G becomes easier," a Micromax spokesperson told Gadgets 360.

There is a 2000mAh battery in the Jio Phone rival that is a considerably larger from what feature phones typically seem to pack in, and should last you a couple of days of moderate usage on a single charge. We didn't notice any significant battery drain on the phone even as we hammered the keypad to scan for everything we could find on the phone.

Should you purchase a Bharat-1 phone?

Well, it really depends. If you already own a smartphone, you might not want to purchase one of these Bharat-1 handsets. You will find that it takes worse images, and its display is unlikely to please your eyes. The phone is also very tiny and the keypad might ruin your experience. But that's alright. Micromax hasn't necessarily built the phone for you.

The Bharat-1 handset has been designed for the 500 million people in India who cannot afford a smartphone, or the data plans that go along with them to avail much of the services. The phone has been designed for the elderly, kids, and everyone in between who hasn't had the opportunity to use a smartphone yet. And for those people, the Bharat-1 may just be a great purchase, even on BSNL's 3G speeds.

Stay tuned to Gadgets 360 for a detailed review of the BSNL Micromax Bharat-1.