Asus seems to have taken a leaf out of Xiaomi's book. There is no other way to describe the strategy Asus has adopted while launching its new smartphones. An aggressive approach with the price and specifications of the ZenFone Max Pro M1 helped Asus grab everyone's attention in the budget segment at the beginning of this year. Now, for its successor, the company has taken the same formula but made it spicier. Asus has opted for the more powerful Qualcomm Snapdragon 660 processor, and with prices starting at Rs. 12,999, the new ZenFone Max Pro M2 does look like a very good deal. Has Asus managed to take out all of its competition with the ZenFone Max Pro M2? Read on to find out.

Asus has given the ZenFone Max Pro M2 a flashy exterior, which makes it easy to distinguish from the phone it replaces. The smartphone is available in two colours, Blue and Titanium, and we had the former in for the review.

The ZenFone Max Pro M2 has a dual camera setup at the back with a single-LED flash. The fingerprint scanner is positioned at the centre and is easy to reach. At the front, this phone sports a 6.26-inch display with a notch at the top and a 19:9 aspect ratio. There's Corning Gorilla Glass 6 on the front, which Asus claims is a first in this price segment.

The ZenFone Max Pro M2 has thin bezels at the sides and the top, but the bottom is comparatively thicker. Asus has moved the earpiece outside the notch and towards the frame. This helps reduce the size of the notch while still having enough space for the selfie camera, a couple of sensors, and a selfie flash. The notification LED has been moved out of the notch and sits right next to the earpiece grille. 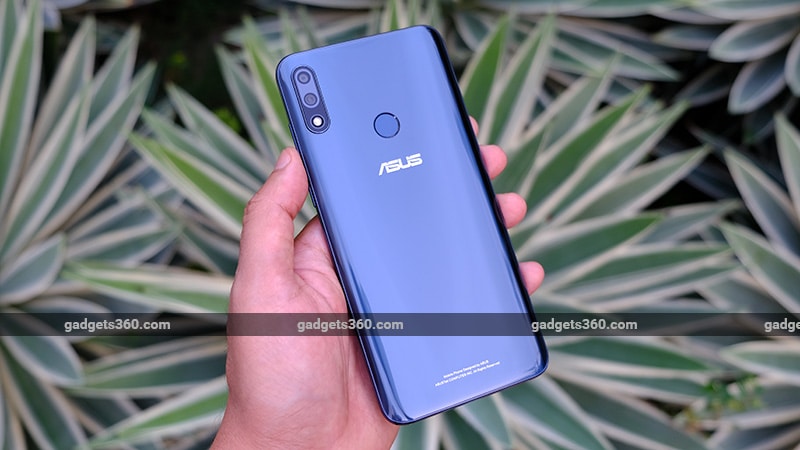 Like most other smartphones at this price point, the ZenFone Max Pro M2's frame is made of plastic. The power and volume buttons are on the right while the SIM tray sits on the left. We found the power button to be well positioned but the volume buttons require a bit of a stretch to reach.

At the bottom, you'll find the Micro-USB port, primary microphone, 3.5mm headphone jack, and a loudspeaker. A secondary microphone is at the top. While the majority of smartphones in this price range still have Micro-USB ports, a USB Type-C port would have been welcome.

Asus has curved the sides of the ZenFone Max Pro M2, which makes it comfortable to hold. What is surprising is that the phone does not feel heavy or bulky in spite of its big battery.

The ZenFone Max Pro M1 gained popularity for its powerful processor at an affordable price. Asus is trying to replicate the same story by offering the ZenFone Max Pro M2 with a Qualcomm Snapdragon 660 SoC clocked at 1.95GHz. This new chip is superior to the Snapdragon 636. It also powers the the Xiaomi Mi A2(Review), RealMe 2 Pro(Review) and the Vivo V9 Pro(Review) which cost a little more.

Connectivity options on the ZenFone Max Pro M2 include Bluetooth 5, Wi-Fi 802.11 b/g/n, five navigation systems, and FM Radio. This is a dual-SIM smartphone and has two Nano-SIM slots. There is support for 4G as well as VoLTE on both SIM slots.

The ZenFone Max Pro M2 has a full-HD display with 450 nits of brightness, which makes it legible under sunlight. Asus has also thrown in the option to adjust the colour temperature of the display to your liking. The display has good viewing angles and can reproduce 94 percent of the NTSC colour gamut.

One of the highlights of the ZenFone Max Pro M2 is the big battery. Asus ships a 10W charger in the box, but there is no support for quick charging, so you can expect long charging times.

Asus has favoured stock Android over its ZenUI skin for its budget phones, which should please Android purists. The company has also committed to pushing out updates for this device quickly. The company ships this smartphone with Android 8.1 Oreo but has promised to roll out an Android Pie update in January 2019.

Our review unit was running the October security patch, which is acceptable. Despite this being stock Android, you get Facebook, Messenger, and Instagram preinstalled along with Google's suite of apps.

The few customisations we could find were the ZenMotion gestures that let you double-tap the screen to wake the device or to put it to sleep, a Smart Screen On feature that prevents the phone from going into standby while you are looking at it, and a few apps such as a calculator and FM radio.

The small notch liberates a lot of space on either side, letting you glance at pending notifications as well as the battery percentage and other indicators. If you don't like the notch, you might be disappointed that there is no way to hide it on this phone.

Looking at the hardware on the spec sheet, we had an idea of what to expect from the ZenFone Max Pro M2. It offers snappy performance thanks to the fast processor and stock Android. We did not encounter any lag or stuttering on our unit when scrolling through the UI or while multitasking.

You can use the fingerprint scanner at the back to unlock this phone, but we found it a bit slow. Face recognition is also supported. Also, unlike on most phones with a notch, we couldn't find a setting to run apps in fullscreen mode. As a result, supported apps including Google Maps ran full screen, while others ran with the areas to the sides of the notch blacked out.

A few of our benchmarks tests did not work on our review unit which could be because of Asus' attempt to keep performance scores from leaking prior to the device's official launch. While AnTuTu failed to run, we managed to run Geekbench 4, which returned 1,438 and 5,180 points in the single-core and multi-core tests respectively. GFXBench also ran fine, returning 42fps in the T-Rex test, 12fps in Manhattan 3.1, and 7.6fps in Car Chase.

These scores are marginally lower than those of the Xiaomi Mi A2. Compared to the Realme U1(Review) which is based on the MediaTek Helio P70 SoC, the ZenFone Max Pro M2 scores less in CPU benchmarks but outperforms it in the GPU tests. 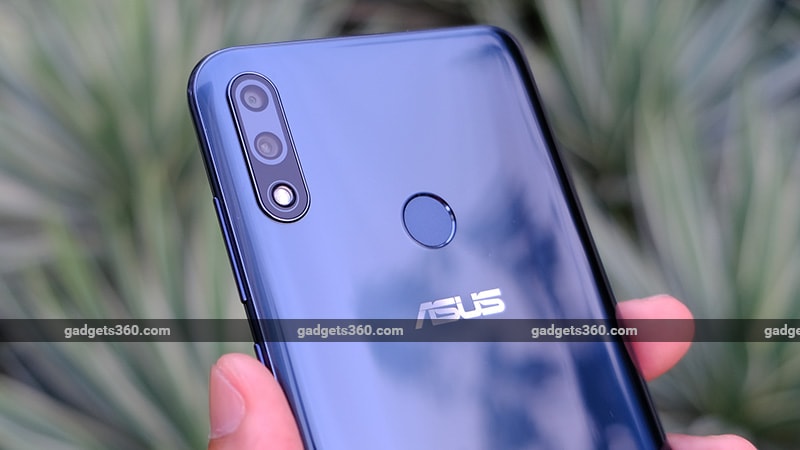 The dual camera setup on the ZenFone Max Pro M2

PUBG Mobile ran with the graphics set at Balanced and frame rate set to Medium. We were able to play the game without any lag or stutter. After around 25 minutes of gameplay, the phone did get slightly warm to the touch.

We enjoyed watching videos and gaming on the ZenFone Max Pro M2, and the bottom-firing speaker was quite loud.

Battery life is excellent thanks to the big 5000mAh battery on board. In our HD video loop test, the phone went on for 17 hours and 58 minutes. With our usage consisting of running a few benchmarks, taking some photos, an hour and a half of navigation using Google Maps, 25 minutes of PUBG Mobile, and an active WhatsApp account, we still ended our day with 55 percent in the tank.

When we did plug this phone in, the supplied charger was able to charge it from zero to 52 percent in an hour.

Asus has upgraded the cameras on the ZenFone Max Pro M2. You get a dual-camera setup on the rear with a 12-megapixel primary camera and a 5-megapixel depth sensor. The primary sensor is a Sony IMX486 with a 1.25micron pixel size and an f/1.8 aperture, while the depth sensor helps take shots with a Bokeh effect.

The camera app is simple and easy to use. There are quick toggles for shooting modes, beautification, the depth effect, and the flash. You also get the option to apply filters right before you take a shot. There is a Pro mode that lets you adjust focus, shutter speed, ISO, exposure, and white balance.

Auto HDR isn't available but you can toggle it manually. Asus has promised an update in December which will add AI scene detection to the ZenFone Max Pro M2, along with EIS and a Bokeh mode for the front camera.

While shooting with the ZenFone Max Pro M2 we observed that it did not set the exposure right in a couple of scenes. For example, a few of our test shots taken during the daytime came out overexposed.

This phone managed good colour reproduction but it did miss out on a few details in objects at a distance. Macros had better detail and the phone did a good job at separating subjects from the background. 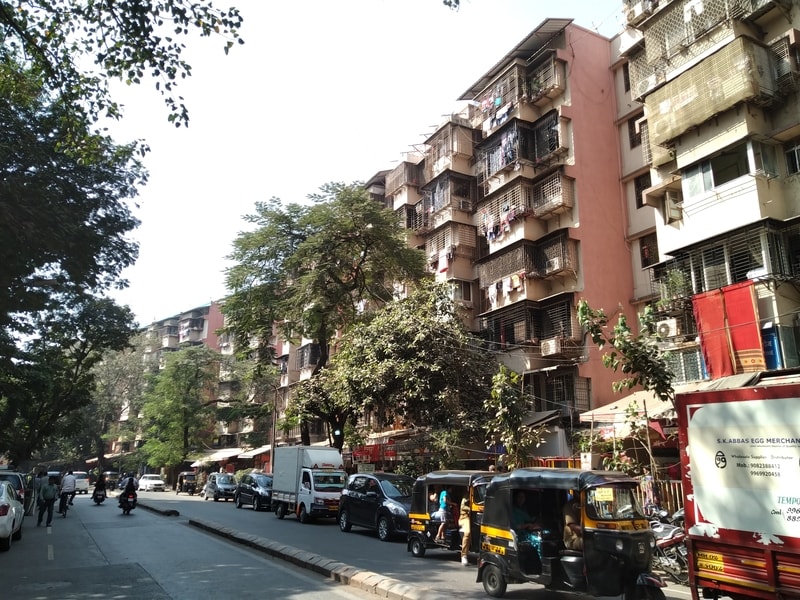 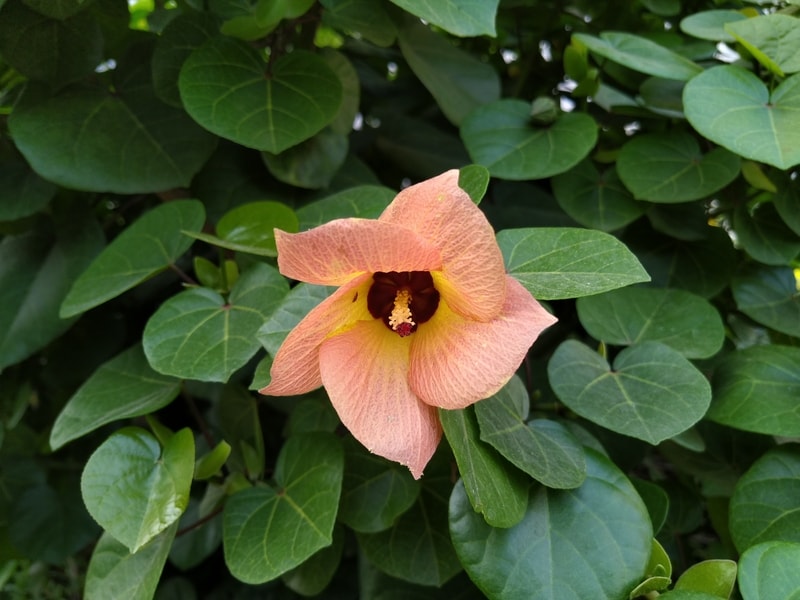 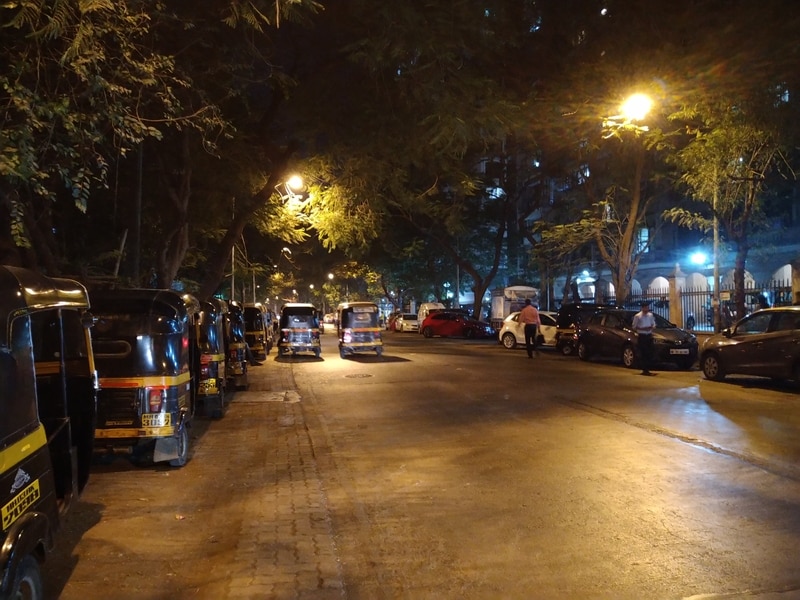 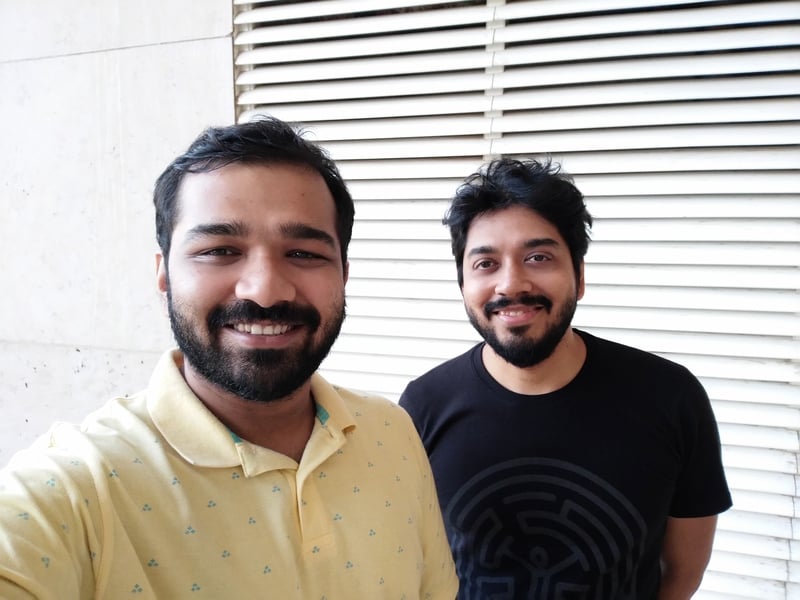 HDR mode still needs some work. It could take care of the brighter areas in a scene, but shots seemed to lack details in the shadows. Portrait mode is easy to enable and gives you the option to set the level of blur you like. The output had good edge detection but looked artificial when set at the highest level of blur.

Low-light camera performance was average, and the phone did not switch to night mode automatically. When taking landscape shots, there was a slight lag as each shot was saved. The output is acceptable, but you will notice a drop in details when you zoom in to each image.

Selfies were also good, and the face detection helps the ZenFone Max Pro M2 lock focus accurately when taking a group selfie. You can select the level of beautification required.

Video recording maxes out at 4K for the primary camera and 1080p for the selfie shooter. Video stabilisation is available at 1080p, and the phone does a good job of reducing shakes.

Verdict
The Asus ZenFone Max Pro M2 has some big shoes to fill, as it predecessor, the ZenFone Max Pro M1 has been a strong presence in this segment. Asus has definitely got our attention by giving this phone a powerful Qualcomm Snapdragon 660 SoC and a big 5000mAh battery.

Performance and battery life are both very good, but if cameras are a priority for you, the Realme 2 Pro has the edge here. If you're choosing between these two phones, you also have to consider the advantages of stock Android as opposed to the custom ColorOS UI on the Realme.

Asus also seems to have gotten the pricing right for the ZenFone Max Pro M2. Starting at Rs. 12,999, you can't really go wrong with it. The variant we reviewed is priced at Rs. 14,999, which is slightly higher than a similarly configured RealMe 2 Pro(Review) or Realme U1(Review).

Going with stock Android was a smart move, and if Asus sticks with its promise of updates, this phone will offer even better value down the line than it does now.