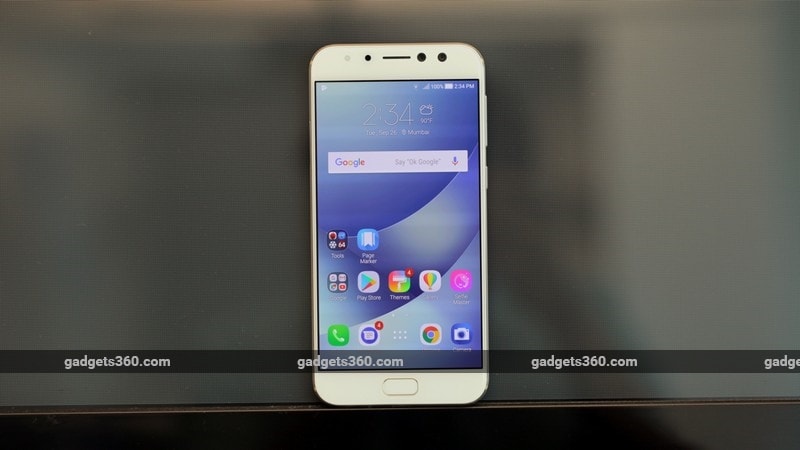 The new Zenfone 4 series is now official, and it looks like Asus is taking a bottom-up approach with its mobile portfolio this time. The first models of this generation to launch in India are part of a new selfie series, and prices range from Rs. 9,999 to Rs. 23,999.

Today, we’ll be testing the current top-end offering, which is called the ZenFone 4 Selfie Pro. Its highlight feature is its two front cameras. However, Asus is doing things a bit differently with its dual camera setup this time around, which could help set it apart from other companies' offerings. Its immediate competition would be Vivo V7+ (Review), which is another recently introduced selfie-centric phone. It’s time to see what big changes Asus has made with its new series, and if this phone is worth buying.

It seems like we’ll have to wait a bit more for Asus to join the borderless display bandwagon, as the ZenFone 4 Selfie 4 Pro follows the company’s existing design philosophy. The bezels on the sides have been shaved down quite a bit though, and the phone is slim at just 6.85mm. The metal body looks and feels great to hold and the sides aren’t slippery. Asus also bundles a silicone case in the box if you want to keep the metal back looking pristine.

The buttons to the right have good tactile feedback but the volume buttons are a bit out of reach if you’re right-handed. There’s a sizeable amount of space above and below the display but this is done for good reason as there are plenty of sensors and the backlit capacitive navigation keys. The chamfered edges around the body and gold lining around the home button give this phone some aesthetic appeal. The 5.5-inch full-HD AMOLED display offers very good colour saturation, without going overboard. Viewing angles are good but we didn’t find sunlight legibility to be all that great.

Despite the 500nits of brightness that the phone boasts of, the display washes out under direct sunlight pretty easily. You do get Gorilla Glass for protection, and it has a 2.5D contour. There’s a 3.5-mm headphone socket, Micro-USB port, and the speaker grille at the bottom. It’s a bit disappointing to not have the newer Type-C connector here. The hybrid dual-SIM tray sits on the left, and can accept a microSD card of up to 2TB in the second slot.

Overall, we think Asus has done a good job with the design of the phone. It might lack the ‘wow’ factor of the Vivo V7+, but the metal body and low weight somewhat make up for that. It also looks pretty good in the Sunlight Gold shade that we have for review. In the box, you get a charger, data cable, silicone case, SIM ejector tool, headset, and a quick start guide.

The ZenFone 4 is decently equipped for a smartphone in this price range. It rocks a Qualcomm Snapdragon 625 SoC, 4GB of RAM, and 64GB of storage. This is a tried and tested processor, and unsurprisingly, general performance is good. Benchmark numbers are also pretty decent. We got 65,222 points in AnTuTu and 22fps in GFXbench. Other specifications include single-band Wi-Fi b/g/n, Bluetooth 4.2, GLONASS, and USB-OTG. It’s still missing features like a 5GHZ Wi-Fi band and NFC. 4G works and VoLTE is also supported.

The Selfie Pro 4 also sees a shift to ZenUI 4.0, which is based on Android 7.1.1 Nougat. Compared to its earlier iteration, ZenUI 4.0 is leaner and has a few design improvements. The functionality and customisation options are still pretty much the same though, so a long-press on the home screen brings up options to change the theme and set other options; swiping right gets you to Google Now; and a long-press of the home button summons Google Assistant. There’s an app drawer too. FM radio is present but is only accessible via the notification shade. Nougat’s split-screen mode is supported, and lets you use two apps at the same time.

The Settings app offers similar controls as before. There’s an always-on display feature, which takes advantage of the Amoled panel, but is not interactive like the one on the Galaxy S8. ZenUI Safeguard lets you set up SOS mode and share your location with close family or friends with three consecutive presses of the power button. Recipients get an SMS with a Google Maps link to your current location. Digging further in the settings reveals additional features like Twin Apps, which basically clones supported apps in order to let you use multiple accounts at the same time. Page Marker adds a floating marker in Chrome, which lets you save Web pages for reading later and offers a ‘reader mode’ for articles. It works well, especially the reader mode, which comes in quite handy.

There isn’t too much bloatware on the phone, thankfully. Other than the most essential apps, you get a Themes app and Mobile Manager, which lets you manage junk files, data usage, etc. Selfie Master is a launcher which lets you jump to the front camera for stills or video, create a collage or slideshow, or enter the BeautyLive mode, which was the highlight feature of the ZenFone Live.

General performance is quite good, and we didn’t encounter any major issues during our review period. ZenUI did get intermittently laggy but that seemed to subside after an OTA update. The interface is generally smooth and multitasking is handled well. The metal body does heat up quickly with extensive camera use, which can get a bit uncomfortable on hot days.

Multimedia playback is handled well too and most games run smoothly. Implosion ran with relatively good framerates. We didn’t have any issues with call quality or 4G reception either. The fingerprint sensor is integrated into the home button, and is fairly quick at authentication. Other than unlocking the phone, you can use it to answer incoming calls.

The front cameras are the main stars of the show here. It’s easy to mistakenly believe that the Zenfone 4 Selfie Pro has a 24-megapixel front camera since that's what Asus markets everywhere, but that actually isn’t the case. If you pay a bit more attention to the marketing material, you’ll notice ‘DuoPixel’ along with the 24-megapixel resolution and that’s because it’s essentially a shooting mode which simulates a 24-megapixel sensor. The main front sensor is a 12-megapixel Sony (IMX362) sensor with large 1.4 micrometer pixels and an f/1.8 aperture. It’s only when you switch to the DuoPixel mode (from the camera settings), that the sensor takes two consecutive selfies and blows them up into one 24-megapixel frame. 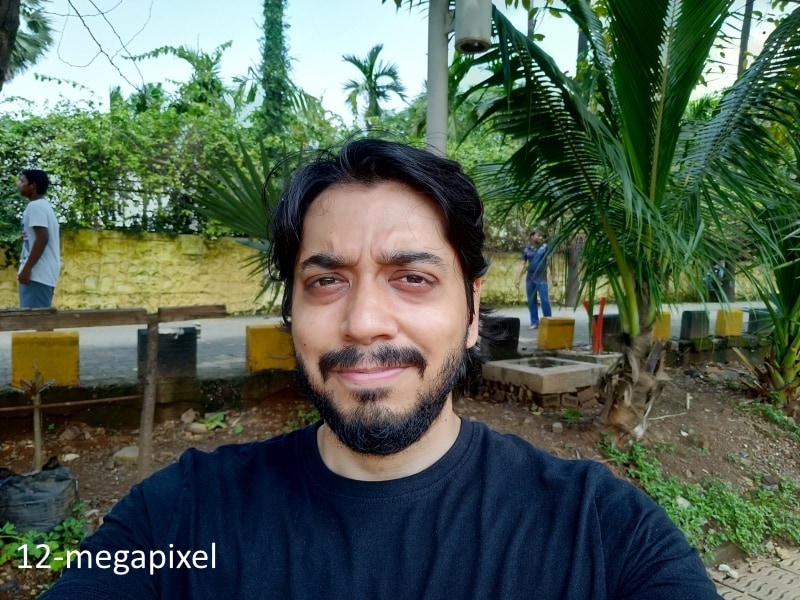 However, the results aren’t always favourable. We often found the selfies taken in the standard mode to have better detail and colours. In DuoPixel mode, details on faces are generally softer, and bright areas are overexposed pretty badly in daylight shots. Low-light selfies are decent but not great. Noise is handled well thanks to the large aperture and pixel size but colours and details are average. The diffused flash helps in extremely low-light scenarios but it’s not very powerful.

The second front sensor has a 120-degree field of view for group selfies, but the narrower aperture and regular-sized pixels lead to lower image quality. In daylight, you can get decent shots, but colours appear washed out and selfies are pretty much unusable in low-light.

The rear 16-megapixel camera does a good job in daylight with detailed landscapes and macros. Exposure is also balanced well as HDR kicks in when needed automatically. It still manages noise-free shots indoors but in very low light, the sensor simply fails to capture a bright enough image. Focusing is quick in daylight but slows down in low light.

Another big feature is 4K video recording using the selfie camera. That’s right, you can vlog in 4K resolution and the quality is very good, as long as you have good light around. 4K video on the rear camera is also very good, but we didn’t find the quality of full-HD videos to be all that impressive. The camera app is fairly straightforward, giving you options to switch between the the main and wide angle front sensors, and a variety of shooting modes like Pro, Super Resolution, Panorama, slow motion, timelapse, etc. There’s a portrait mode too for the front and rear sensors, which works decently well.

The ZenFone 4 Selfie Pro is fitted with a 3000mAh battery, which managed 9 hours and 53 minutes in our video loop test, which is little better than average. With regular use, we managed to get up to a full day on a single charge. You also get a 10W charger in the box, which takes about two hours to fully charge the phone. There's no support for fast charging.

The Asus ZenFone 4 Selfie Pro is a pretty feature-rich offering at this price level, and we’d say it's a better bet than Vivo’s V7+. If you’re into vlogging on your smartphone, then you’ll appreciate the 4K recording support with the front camera. We don’t get why Asus had to resort to gimmicky features like the 24-megapixel DuoPixel mode, when the Sony sensor is capable of good things by itself. ZenUI 4 certainly looks leaner, but not much has really changed beneath the surface. Our main concerns here would be the weak sunlight legibility of the display and the fact that the cameras (all three of them) really struggle to give satisfactory results in low light.