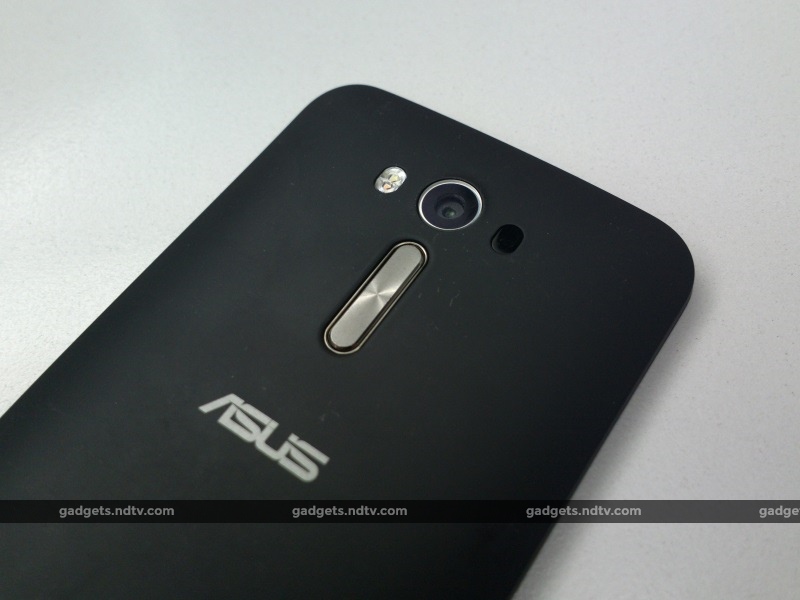 The ZenFone 2 range by Asus is a bit confusing, because there are so many different variants. Different chipsets, RAM, display resolutions and storage capacities make it a difficult phone to purchase, and you need to study the spec-sheet and price carefully before hitting the 'buy' button. As if this wasn't confusing enough, Asus has decided to launch more ZenFone 2 models, and the one we're reviewing today is the Asus ZenFone 2 Laser (ZE550KL).

You can leave it to Asus to be even more confusing than you expected, with multiple models within the ZE550KL sub-model of the ZenFone 2 Laser. The device we have for review has a 5.5-inch 720p screen, with a Qualcomm Snapdragon 410 SoC and 2GB RAM on board, while there is also a Snapdragon 615-powered option with 3GB RAM.

What's so special about the Laser, you ask? The Rs. 9,999 smartphone has a laser-powered autofocus system, which fires an invisible laser pattern onto the subject area to map the scene and properly adjust the focus accordingly. This should theoretically lead to quicker focusing and better shots, but is that the practical reality? Read on to find out. 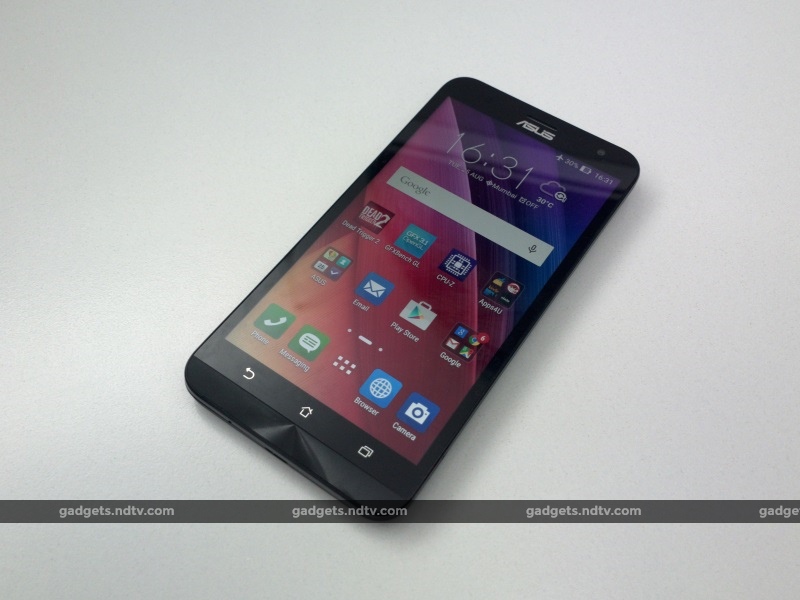 Look and feel
The Asus ZenFone 2 Laser (ZE550KL) looks similar to the Asus ZenFone 2 (Review | Pictures). Both handsets are the same size and shape, and Asus retains its distinctive concentric-circles pattern on the chin of the device. It's near-impossible to tell the difference between the two phones at the front.

The sides remain free of any buttons or slots, and the bottom has the Micro-USB port. The power button and 3.5mm port are at the top of the device. Touch gestures within the user interface allow you to wake the device with a double tap and launch certain apps, so you won't really need the power key for much apart from powering on and off the device. 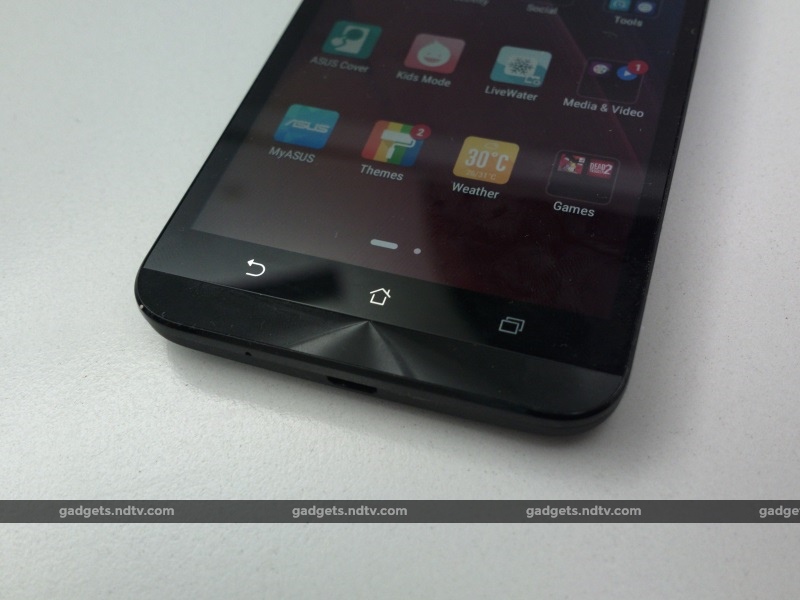 Like the ZenFone 2, the volume rocker of the ZenFone 2 Laser is at the back of the device, just under the camera. Although it takes some getting used to, we eventually got comfortable with the positioning and it's a convenient place to put the volume controls. We were also satisfied with the display, which at 720x1280 pixels is suitably sharp for a budget device. Colours and brightness are adequate as well.

The Laser departs from the design of the ZenFone 2 in one small way; the dual-tone flash is to the left of the camera instead of above, and the laser is to the right of the camera. The rest of the rear of the device is exactly the same as the predecessor, with a similar curved rear that is just slightly slimmer at 10.8mm, and a speaker grille at the bottom. The back panel is removable, with the replaceable battery and SIM-slots underneath. The Laser uses what appears to be a hybrid SIM slot, but you can actually use both a SIM and microSD card, with the storage card slotting in above the SIM. 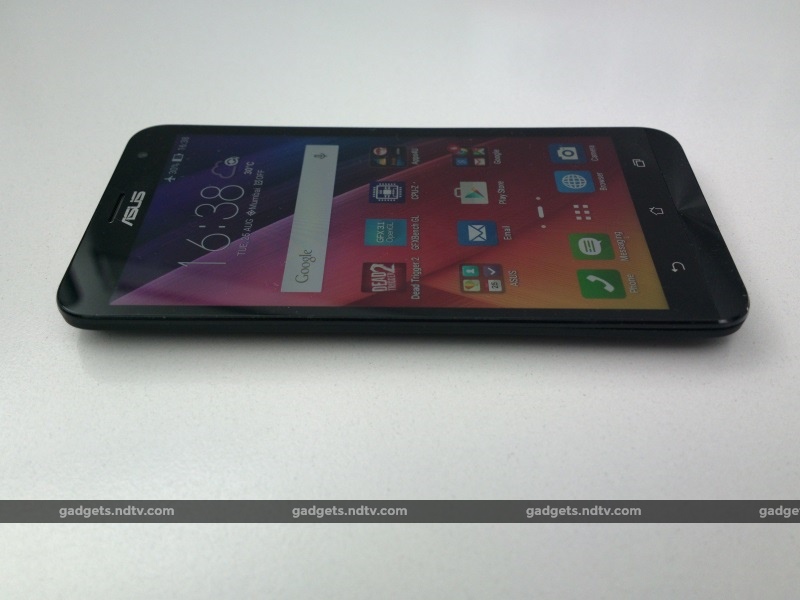 Specifications and software
Asus has often used Intel mobile chipsets in its smartphones, and all variants of the ZenFone 2 sold in India thus far use Atom SoCs. However, the ZenFone 2 Laser (ZE550KL) departs from tradition to use Qualcomm Snapdragon chipsets. The cheaper variant (that we tested) uses a Snapdragon 410 SoC with 2GB of RAM, while the more expensive variant uses a Snapdragon 615 chipset with 3GB of RAM. The Laser is a bit expensive for a Snapdragon 410-powered device (considering you can get a Snapdragon 615-powered Yureka Plus for less), but this can be justified to some extent by the laser autofocus system that is the signature feature here.

The rest of the specifications are identical in both devices: 16GB internal storage, 13-megapixel primary camera, 5-megapixel secondary camera, up to 128GB expandable storage support, and a 3000mAh battery. Refreshingly for a budget device, both SIM slots are 4G capable. 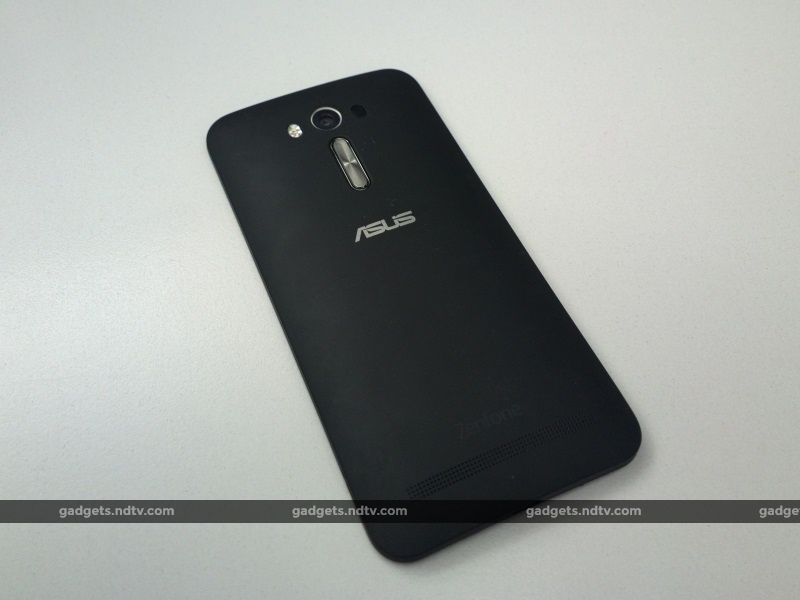 The Asus ZenFone 2 Laser runs Android 5.0 with Asus' own ZenUI layered on top. We aren't fans of the look of the user interface, but it's zippy, efficient and mostly unobtrusive in its function. It automatically groups certain apps together, which can be either extremely convenient or irritating, depending on how you look at it.

There's plenty to like in the user interface, including improved security, customisation in the form of what shows up on the quick settings bar, screenshot file format, and more. You can also set the camera to quick-launch on double tapping the volume key, and set gestures for launching certain apps even when the device is asleep. ZenUI offers an impressive level of customisation and is one of the better custom overlays amongst the budget Android lot. There are some useful apps and tools, but there is also a bit of bloatware which can't be uninstalled. 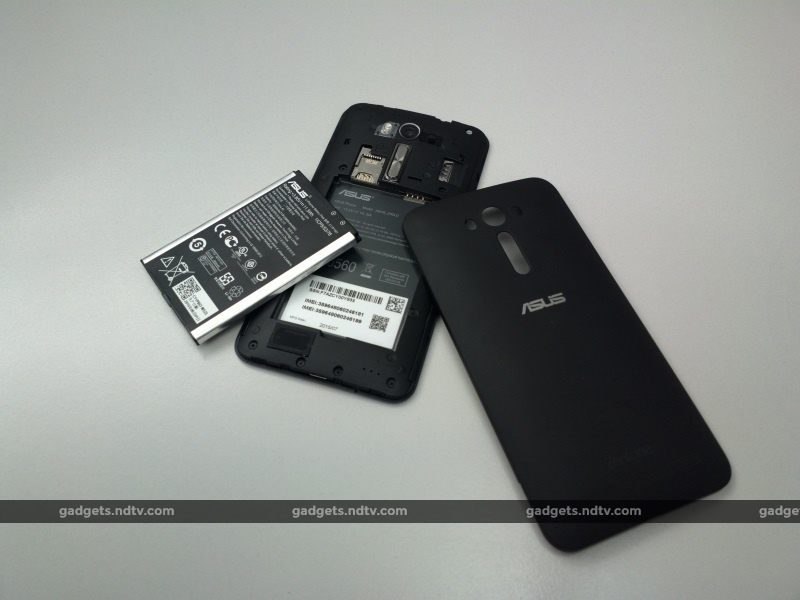 Camera
The Asus ZenFone 2 Laser is named so because of its signature feature; laser-autofocus for the primary camera. The 13-megapixel rear camera is at the top center and is adorned by a dual-tone flash and laser, while the 5-megapixel front camera sits near the top-left corner. On paper, the rear camera really stands out among the rest of the spec-sheet. This is the kind of camera configuration we're used to seeing on high-end devices; the laser autofocus system was recently seen on the LG G4 (Review) and the OnePlus 2 (Review | Photos).

The camera itself is decent in both well-lit and darker indoor settings, but tends to produced washed-out images in daylight. This can be fixed to some extent with the use of HDR mode and some careful focusing, but it's still definitely a problem worth noting. However, the rest of the colour range is good, and sharpness and detail and adequate for a sub-Rs. 10,000 device. 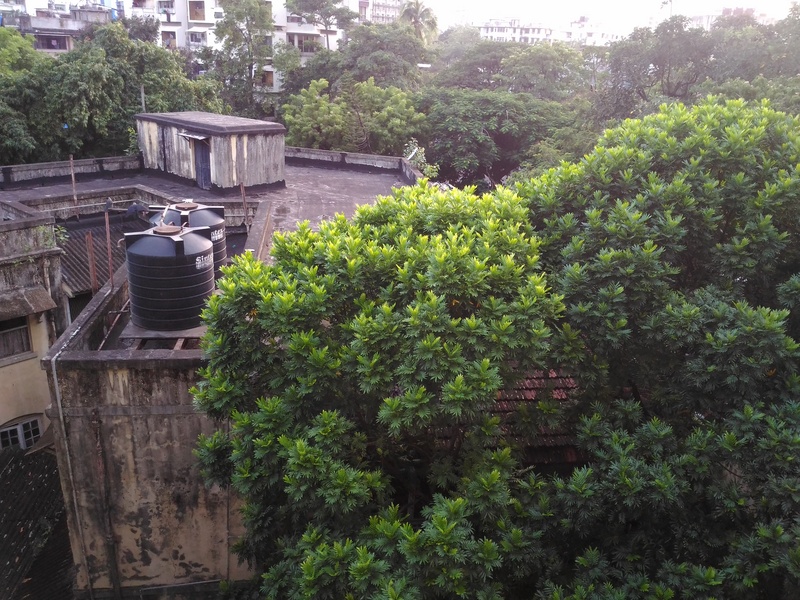 Bear in mind, the laser autofocus system is less effective over longer distances and open environments, because the receiving sensor is too small to capture the reflecting laser beam at times. Furthermore, this leads to a lack of ability to accurately focus on moving objects. The phone's software does revert to the traditional contrast detection methods of focus when required, though. However, the ZenFone 2 Laser is best when shooting over shorter distances.

Shooting up close produces excellent results, capturing plenty of information quickly and accurately. The laser-autofocus system works well to quickly and properly focus on objects within a reasonable close shooting sphere. It also quickly adjusts to slight movements. Although the laser system is only slightly (and usually negligibly) faster than a traditional autofocus system, it's definitely more accurate and usually gets the focusing of the subject spot on.

The camera app is comfortable enough to use, with plenty of options in terms of modes and tweaks. Most key settings are easy to reach and quick to toggle, and there are some excellent filters and modes, including time lapse, depth of field, and a GIF creator, to name a few. The manual mode has a long list of professional options, along with a level indicator to ensure straight shots. 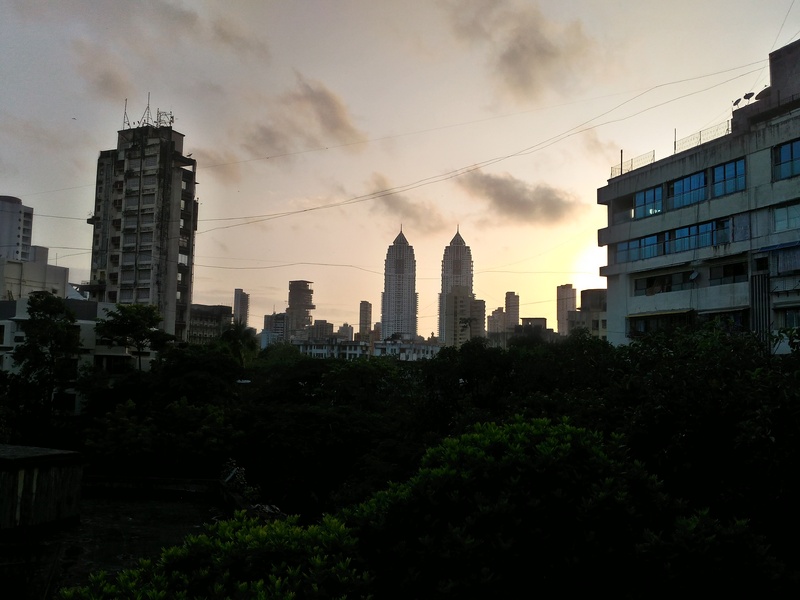 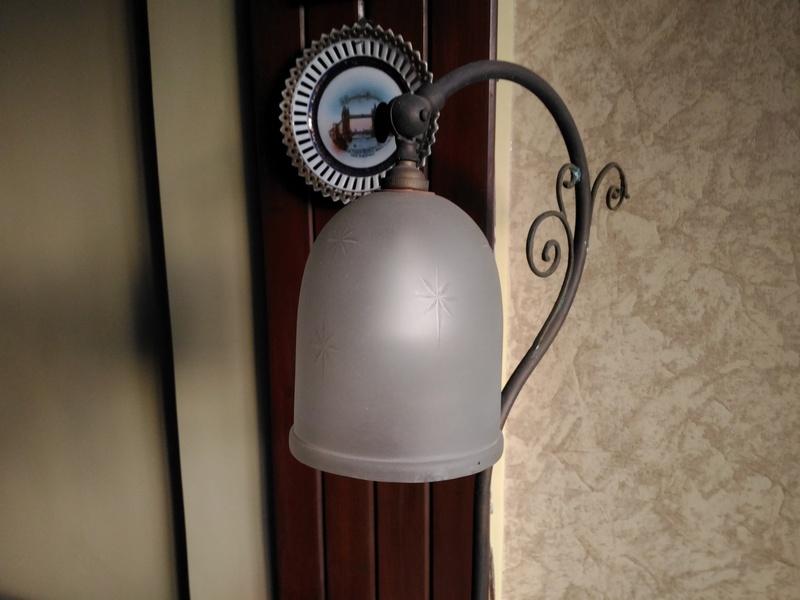 Performance
While camera performance is generally favourable with the Asus ZenFone 2 Laser, it's important to note that the device is an entry-level smartphone with specifications that are good for only basic performance. However, despite that we were impressed with the way the phone handled standard smartphone functionality. Dead Trigger 2 ran smoothly, with minimal heating and battery drain issues. Our test videos also ran smoothly, including the heavily encoded samples. The user interface itself is comfortably snappy, but there is a bit of noticeable delay when starting up apps and unlocking the device. This shouldn't bother budget users too much, though. 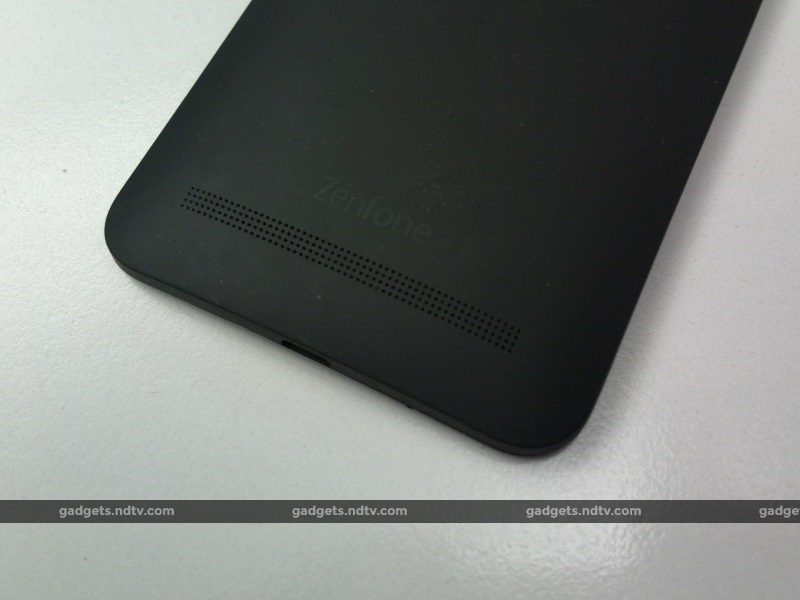 We ran the Asus ZenFone 2 Laser through our usual suite of benchmark tests, and results were more or less in line with other Snapdragon 410-powered devices. GFXBench and 3DMark returned scores of 9.5fps and 5298 respectively, while AnTuTu and Quadrant produced scores of 23545 and 13872 each. While better performance can be attained at the same price, it's important to remember that you're paying a premium for the technology behind the camera and the improvements it brings to the phone's photography abilities.

Finally, the phone performed well in our video loop test to determine battery life, going for nearly 14 hours on a full charge. The large 3000mAh battery is certainly a contributor to this, and the rest of it can be put down to specifications that work efficiently with the system. With regular usage, the Laser is expected to go over a day on a full charge. 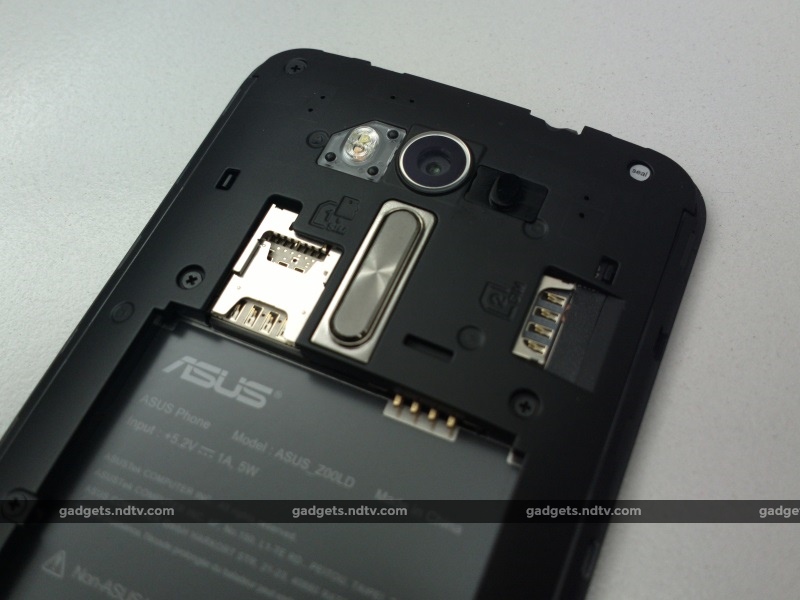 Verdict
The Asus ZenFone 2 Laser is a bit of a misfit among other phones in the sub-Rs. 15,000 price bracket, because of the use of laser autofocus technology. The phone is essentially a budget device with budget specifications and an entry-level chipset, but the addition of some nifty camera technology that actually works well sets this phone apart. Provided you concentrate most of your photography in closed, short-distance environments, you're unlikely to find a quicker and more capable camera phone at this price.

Outdoor shooting, underwhelming performance compared to some of its peers, and a slight delay when opening apps are the only real weaknesses of the Asus ZenFone 2 Laser. However, there is a sense of consistency and reliability in the device, and it won't fail you when you need it to work. Furthermore, it looks decent, is built well and has great battery life.

If you're willing to spend a little more, there is even the option of the Snapdragon 615-powered ZenFone 2 Laser, which comes with 3GB RAM and is expected to offer better performance on paper, though we haven't had a chance to test it yet. However, at under Rs. 10,000, the Asus ZenFone 2 Laser (ZE550KL) with 2GB RAM is probably the best closed-environment camera performance on a budget smartphone, and it's worth checking out if you're a photography enthusiast.