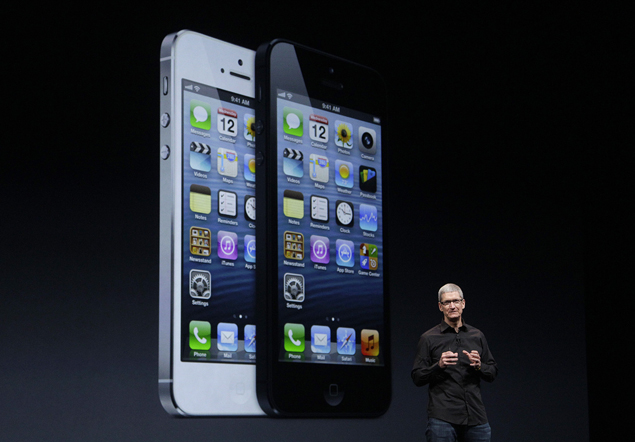 As I played around with the iPhone 5 on Wednesday, I wondered what the late Steve Jobs would have thought about the latest twist on Apple's best-selling device.

It didn't take long to conclude Jobs would have been delighted with the iPhone 5's blend of beauty, utility and versatility.

Add in the more advanced technology and new features that went into this iPhone, and it's clear Apple has come up with another product that will compel hordes of people to line up outside its stores before its Sept. 21 release in the U.S., Japan, Britain, Germany, France and four other countries. The mad dash to buy the iPhone 5 will be repeated again on Sept. 28 when it goes on sale in 22 other countries. All the models of the iPhone 5 will sell for the same prices as its predecessor, starting at $199 with a two-year data and calling plan.

An important caveat about these impressions: I was only allotted about 15 minutes with the iPhone 5 at Wednesday's launch event, not enough time to discover if it might have some technological bugs. I am sure in the coming days other reviewers will have the opportunity to give the phone a more thorough vetting.

For many people, the iPhone is going to be a case of love at first touch. It's incredibly light and seems to be easier to hold. That means it might not be dropped as frequently as previous iPhones, reducing the chances of the glass on the display screen getting damaged.

One woman who also was testing out an iPhone 5 couldn't stop raving about how ideal the new design was for people with smaller hands. "All the other iPhones were made with men in mind because they could easily slip from your grasp if you didn't have big hands," she said. "Now we finally have an iPhone for women."

The new iPhone also is easy on the eyes, thanks to a larger screen and its "Retina Display," the high-definition technology that Apple introduced in previous models. Video and photos look even more lush on the iPhone 5's bigger and better screen. 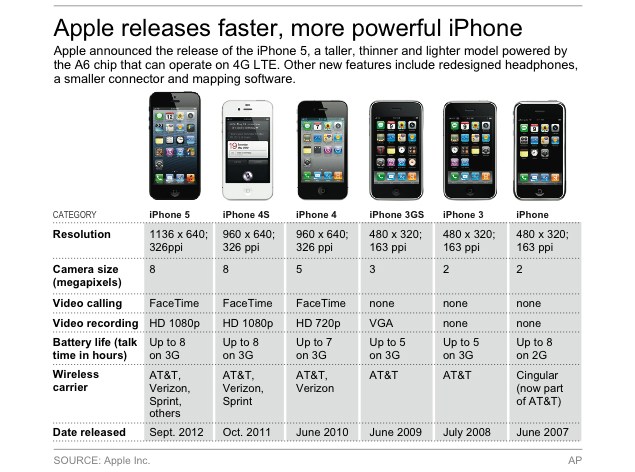 At 4 inches diagonally, the iPhone 5's screen is a half-inch larger than previous generations and Apple make sure to take advantage of it. On the more prosaic side of things, the extra space means you can now see five rows of apps on the home screen instead of the previous limit of four rows. Open the calendar and you can see five days of events on the screen in horizontal mode, instead of just three.

The larger screen really comes to life, though, with what is perhaps its coolest feature - a tool called "Panorama" that automatically stitches together a series of pictures into a majestic vista. Panorama can be turned on simply by going into the iPhone 5's camera mode and then selecting it on an option menu. Once it's activated, an arrow guides you as you slowly pan the camera around whatever scenery you desire (if you move too fast, Panorama tells you to slow down and also advises you if you are moving the camera too high or low). Once you are done, you can look at the panoramic shot within seconds and zoom into whichever areas of the picture look most interesting.

Not surprisingly, watching video on the larger screen is also more pleasurable, although I still think the iPad and other tablet computers are a much better way to watch movies and TV shows on the go.

The device is also speedier because of a more powerful processing chip and upgraded wireless technology that accelerates Web surfing.

Apple also has equipped the iPhone 5 with a superior sound system, courtesy of the new headphones that the company says it spent three years developing. The headphones, called "EarPods," are a vast improvement on the ear buds that Apple has been giving away with its devices for more than a decade. The new headphones actually stay in your ears and make it seem as if the sound is playing inside your head. The EarPods come free with the iPhone 5, and they sounded as good as $100 headphones sold by a variety of other companies.

The new phone's operating system, iOS 6, also introduces another fun toy that makes it easy to share photos with your friends and family. Just select a picture, or even a series of photos, then email them to whomever you want. Assuming the recipients also has an Apple device running on iOS 6, they will get a notification that will send the designated photos to their iPhone, iPad or iPod Touch. The recipients don't necessarily have to own an iPhone 5 because the new iOS can be downloaded for free beginning Sept. 19 on a wide range of older Apple devices, including the three previous versions of the iPhone and the last two versions of the iPad.

The new operating system also stands out for what's missing.

The pre-installed YouTube app that had been part of the iPhone since it came out in 2007 is gone (you can now download a new application made by YouTube owner Google Inc. in Apple's iTunes store). Even more noticeable is the absence of Google Maps. Apple has cast aside one of Google's most popular services for its own mapping system and, from what I saw, it looks like it's going to keep users happy. It offers three-dimensional renderings of many major cities, aerial views, and, best of all, turn-by-turn directions narrated by the iPhone's virtual assistant, Siri. Assuming the directions are accurate, I doubt Google Maps is going to be missed.

The new iOS also offers a feature called "Passbook," where digital coupons, airline tickets and gift cards can be conveniently stored in one location. This, too, is going to be popular. Yet, Passbook would be an even handier tool if the iPhone 5 boasted a near-field communication chip to enable wireless payments at the checkout stands equipped for the still-nascent technology. Some phones running Google's Android software are able to process payments because they have the NFC chip.

Siri is also supposed to be smarter and even more helpful in the iPhone 5, although I didn't get a chance to challenge her in Apple's noisy testing room.

Too bad because I would have liked to ask Siri what Steve Jobs might have thought of the iPhone 5. But, I am pretty sure I know the answer.

The world loves iPhone 5, but some say it lacks "wow"
Amazon's new $199 tablet gets tepid reviews