Alcatel A5 LED and Alcatel A7 First Impressions

TCL brand Alcatel on Thursday expanded its A series with the launch of the A5 LED and A7 smartphones. Both new models are targeted at young buyers and are touted to deliver unique experiences to take on the competition. The A5 LED is specifically designed to let users stand out from the crowd thanks to its modular rear. The company has also launched two modules to support this distinctive feature. We spent some time with the two new Alcatel smartphones following the launch event, and here are our first impressions.

In the growing space of smartphones with narrow screen borders, the Alcatel A5 LED and Alcatel A7 still have thick bezels. Nevertheless, both models are compact enough to fit in your palm comfortably. The Alcatel A5 LED has a height and width of 146mm and 72mm respectively, and a thickness of 10mm. It weighs 159g with the default back cover, though attaching the additional modules will increase its weight to some extent. The Alcatel A7, on the other hand, measures 153x77x9mm. Both devices have plastic bodies and metallic back covers.

The Alcatel A5 LED has thick borders around its 5.2-inch HD IPS display panel. The fingerprint sensor below the screen is accompanied by capacitive Back and Overview buttons. Above the display there is an earpiece, a 5-megapixel front camera, and an LED flash. The volume rocker and power button are on the right, well within reach. At the bottom, the smartphone has a Micro-USB port, loudspeaker, and the primary microphone. The top has a 3.5mm audio jack and a secondary microphone. On the back, the A5 LED has a 13-megapixel primary camera with an LED flash. The default camera app on the A5 LED has features such as panorama and instant collage; the latter works similar to Nokia's Dual-Sight mode and captures photos with the front and rear cameras simultaneously. 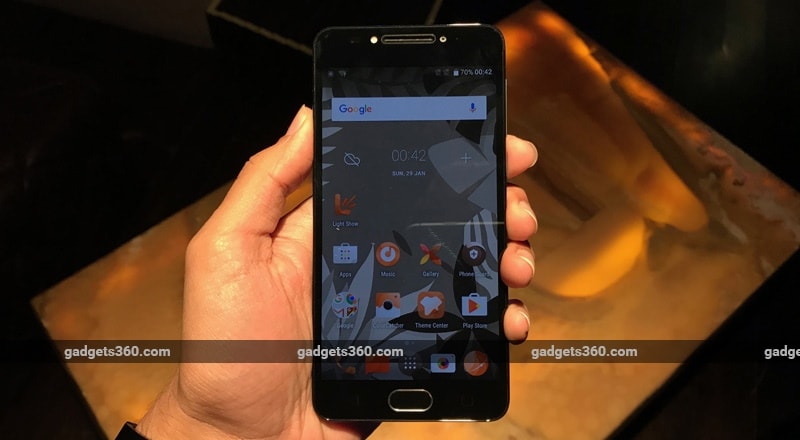 The back panel of the Alcatel A5 LED is removable, and can be replaced with modules. The company has two modules, called POWER+ MOD and LIGHTUP+ MOD. As its name suggests, the LIGHTUP+ MOD has built-in multi-coloured LED lights that can be customised with the preloaded LightShow app. You can configure the LEDs to light up for notifications. Also, there are preloaded games that can make use of the LED panel on the back. A Colour Catcher feature lets you adjust the colours of the LED lights based on the environment around you, using the phone's camera to get an idea of your surroundings. Unlike the LIGHTUP+ MOD, the POWER+ MOD is more functional, augmenting the battery life of the Alcatel A5 LED with a 3100mAh battery that complements the phone's own 2800mAh battery. 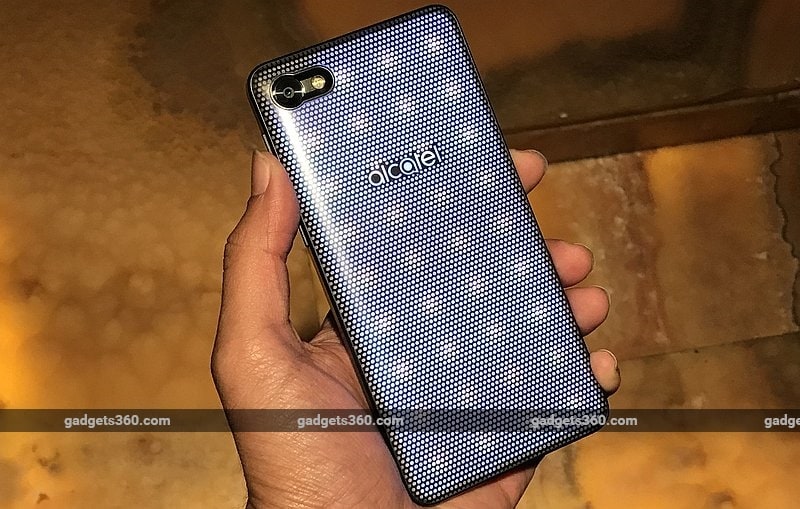 The modular design of the Alcatel A5 LED brings to mind the Moto Z series of phones, which all support a wide range of Moto Mods. However, unlike Moto Mods, the Alcatel ones aren't easily swappable. You need to remove the default back cover to use the POWER+ MOD or the LIGHTUP+ MOD. Having said that, they fit right onto the body and the phone still feels sturdy with them attached - even though they add nearly 3mm of thickness to the device.

The Alcatel A7, on the other hand, has a 5.5-inch full-HD (1080x1920 pixels) LTPS display on the front with thinner borders than the A5 LED, and uses on-screen Android navigation buttons. The front panel has a loudspeaker-microphone combo grill but it's a single, monophonic speaker, not part of a stereo pair. Above the screen, you'll find the earpiece, as well as an 8-megapixel secondary camera with an LED flash. On the right, the A7 has volume and power buttons that are easily accessible with one hand. At the bottom, there's a Micro-USB port, whereas the top has a 3.5mm audio jack and secondary microphone.

Unlike the modular back of the A5 LED, the Alcatel A7 has a simple removable rear panel. There's a 16-megapixel primary camera, LED flash, and fingerprint sensor on the back. The default camera app on the smartphone has a time lapse mode in addition to panorama and instant collage modes. Further, there is a 4000mAh battery, and the phone supports fast charging with a 9V 1.67A power source. The company claims that this smartphone can be fully charged in 30 minutes using its fast charging technology.

The Alcatel A5 LED is powered by the MediaTek MT6753 SoC, which has a 1.5GHz octa-core CPU and ARM Mali-T720 MP3 GPU. The phone also has 3GB of RAM and 16GB of onboard storage which is expandable via a microSD card. There is a hybrid dual-SIM slot to support two 4G SIMS, or one SIM plus a microSD card.

On the other hand, the Alcatel A7 uses the MediaTek MT6750T SoC that has a 1.5GHz octa-core CPU and Mali-T860 MP2 GPU, as well as 4GB of RAM. The smartphone has 32GB of onboard storage that can be expanded using a card. The phone has a hybrid dual-SIM slot, just like the A5 LED. 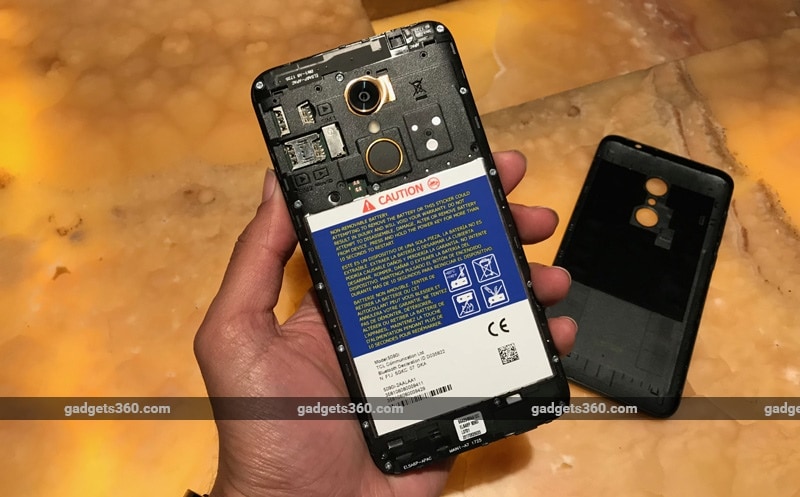 Alcatel A7 with dual SIM support

On the software side, the Alcatel A5 LED runs on Android 6.0 Marshmallow with a custom skin on top. It also has some preloaded apps such as Facebook, Messenger, and WPS Office. Further, there is a Theme Center to let you change the theme, matching your taste and preferences, and a Private mode that lets you pick five apps such as WhatsApp, Instagram and the Phone that you can then launch with each of your fingerprints.The Alcatel A7, contrarily, runs Android 7.0 Nougat with a similar skin, but some default Nougat features are also available to make the experience superior. 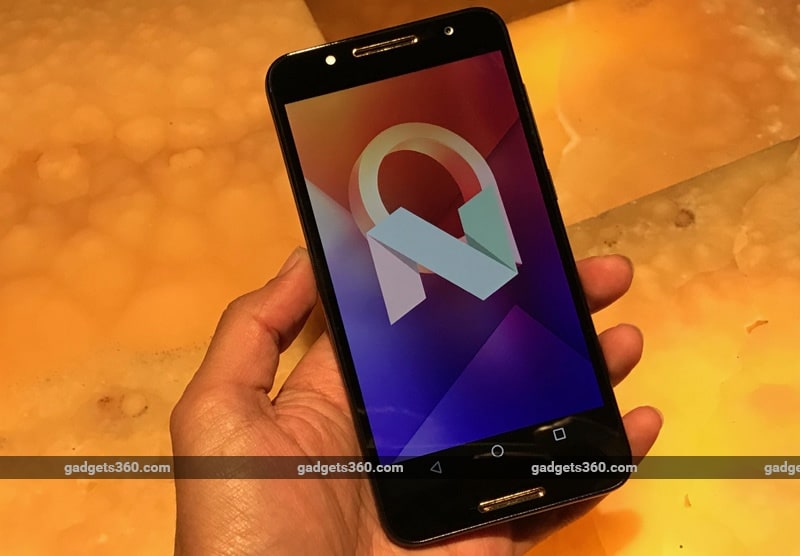 Alcatel A7 with Android 7.0 Nougat

After exploring the design and the hardware, we got some time to take a few photos with both the Alcatel A5 LED and the Alcatel A7 at the launch event, but we weren't really pleased with the results. Most of the shots that we captured at the launch venue exhibited some noise when previewed on the phones' own screens. That could be due to dim lights in the room, so we will reserve judgment till we review these phones ourselves.

We didn't find any lag in terms of performance on the A5 LED and A7. Moreover, proprietary features such as the Theme Center and the Private Mode do make these new Alcatel smartphones stand out a bit.

Stay tuned to Gadgets 360 for our full reviews of the performance, features, cameras and battery life of the Alcatel A5 LED and Alcatel A7.

Further reading: Alcatel A5 LED launch, Alcatel A7 launch, Alcatel A5 LED Price, Alcatel A5 LED price in India, Alcatel A7 price, Alcatel A7 price in India, Alcatel, Mobiles, Android, India
Jagmeet Singh Email Jagmeet Jagmeet Singh writes about consumer technology for Gadgets 360, out of New Delhi. Jagmeet is a senior reporter for Gadgets 360, and has frequently written about apps, computer security, Internet services, and telecom developments. Jagmeet is available on Twitter at @JagmeetS13 or Email at jagmeets@ndtv.com. Please send in your leads and tips. More
Apple Looks Set to Boost Low-Light iPhone Photography With InVisage Acquisition
Thor: Ragnarok Blows Past $500 Million at Worldwide Box Office in a Week

product The Alcatel A5 LED and Alcatel A7 debuted in India on Thursday. Here are our first impressions, so you can decide whether their distinct features are right for you.

Alcatel A5 LED and Alcatel A7 First Impressions
Comment