Sorry Samsung, 'Plenty' Is Not an Acceptable Answer to 'How Many Tizen Apps Are Available Today?'

Samsung launched its first smartphone based on the Tizen operating system on Wednesday. While the Samsung Z1 is unlikely to give the likes of Xiaomi Redmi 1S and Asus ZenFone 4 sleepless nights in terms of specifications, the big story here of course is Tizen.

We first heard about the OS back in 2012, and while Samsung has since managed to ship Tizen-based wearables and also announced its 2015 lineup of smart TVs will run Tizen, the Z1 launch is an important step after several false starts and delays.

While Samsung publicly insists Tizen and Android will continue to co-exist, in an ideal world the company would love to shift its entire user base (as well as apps and services) from Google's operating system to the OS it helped develop from the ground up. Android was a good, readymade (albeit immature at the time) solution for Samsung when it was looking to enter the smartphone market quickly back in the day.

Where would Samsung be today if it had waited to develop a smartphone OS of its own? Would Android have the reach it has today without a partner as big as Samsung during the formative years? It's hard to say who's benefited more from the partnership. Despite the success though, recent reports have indicated that the relationship between the two companies has increasingly become rather strained.

All this while, Samsung has been up against Apple, a company that controls every tiny detail: from the hardware and software to the apps that come pre-installed to the way its device are sold. While this obviously allows Apple to control the overall end user experience, it also allows greater levels of optimisation between hardware and software. Other companies have been watching this carefully and learning their lessons. A lot of talk around Microsoft's acquisition of Nokia's mobile business was centred around maximising these efficiencies, and it's clear this hasn't gone unnoticed in South Korea either.

At the Z1 launch event in New Delhi on Wednesday, Samsung, when confronted with the modest specifications of the first Tizen-powered smartphone, spoke about the optimisations it has been able to achieve by working on hardware and software at the same time. While this was a welcome change for a company that's usually too happy to talk about octa-core processors and gigs of RAM, it seemed the company was in no mood to talk about any other numbers. 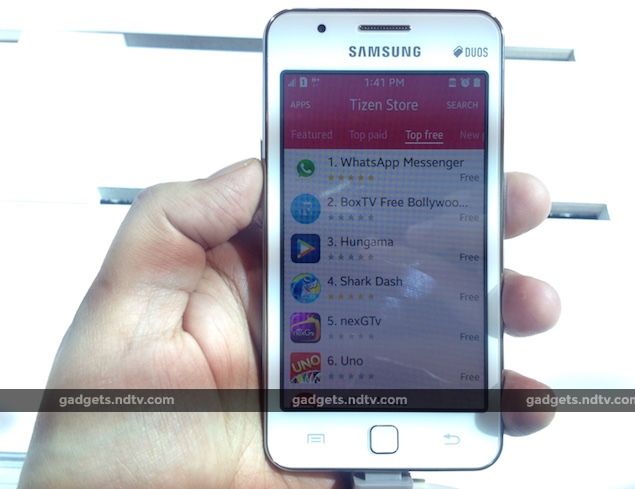 We asked Asim Warsi, Vice President, Marketing, Mobile & IT at Samsung India, how many apps the Tizen store has at launch. "Plenty," he replied, laughing. When asked to elaborate upon what seemed like an answer given in jest, Manu Sharma, Director, Samsung Mobile, stepped in with a counter question: "How many apps do you use on a daily basis?" Since that wasn't technically an answer to our question, we continued to press. "The Tizen store has an ever growing number of apps," said Warsi. Not satisfied with that either, we asked Warsi if he cared to put an exact number to the number of Tizen apps available the last time he checked. "I can't say that," came the reply.

Well, you could've saved us all a couple of minutes by saying that in the first place.

It's clear from Samsung's reluctance to talk about exact numbers that it isn't happy with the state of affairs - or else there'd be plenty of shouting from the rooftops. We don't necessarily blame the company - getting developers on board a new platform is a difficult task, especially when you didn't even have a shipping product to show until today. However, not answering the question directly is unlikely to help anyone.

Let's face it. Whatever number (of Tizen apps) Samsung would've hypothetically announced on Wednesday would've paled in comparison to the million plus that both Android and iOS boast today. So, in the absence of a compatibility layer that would've allowed Tizen to (say) run Android apps - which it doesn't have, just in case you were wondering - the "how many apps do you have?" battle is one no one expected Tizen to win today. We are happy to cut the new guy in town some slack - but that doesn't mean the question is irrelevant.

Knowing how many apps Tizen has today would've told us a few things: How successful has Samsung been in convincing third-party developers to board the Tizen train? How easy is it to develop new apps using the Tizen SDK? How much of an effort is to port (say Android) apps to Tizen? While these topics may not seem to be directly related to consumers, they all relate to the overall health of the platform - something you invest in when you buy a smartphone. Sadly, Samsung refused to touch upon any of these topics in what was essentially the global consumer release of its brand new platform called Tizen.

While it's true most people don't use more than half-a-dozen third-party apps during the course of a day, expecting consumers to invest in a platform without knowing what to expect in terms of the number and quality of apps is ignorant at best, and arrogant at worst.

Sorry Samsung, 'Plenty' Is Not an Acceptable Answer to 'How Many Tizen Apps Are Available Today?'
Comment