Nokia 7 Plus Is a Nexus Phone That Google Stopped Making

Google pulled the plug on its Nexus lineup of smartphones about two years ago. This put an end to a popular line of affordable smartphones running stock Android, and getting updates straight from Google. While the company did introduce the Pixel series of smartphones to showcase pure stock Android instead, these phones haven’t exactly been affordable. As a result, Nexus users were stranded with very few options for their next upgrades.

Now, the recently revitalised Android One programme allows any manufacturer to deliver most of the features of the Nexus lineup. Last year, Xiaomi launched a single Android One device in India called the Xiaomi Mi A1 (Review). It was priced at Rs. 14,999 with the promise of Android updates for two years. While the later Nexus smartphones - like Nexus 6P - were premium devices, usually with flagship-grade specifications and price tags, while the Xiaomi Mi A1 was a budget offering in comparison. Buyers willing to spend up to Rs. 30,000 - Nexus 5 territory - on a phone still did not have an option with powerful specifications running vanilla Android, right until the launch of the Nokia 7 Plus (Review). 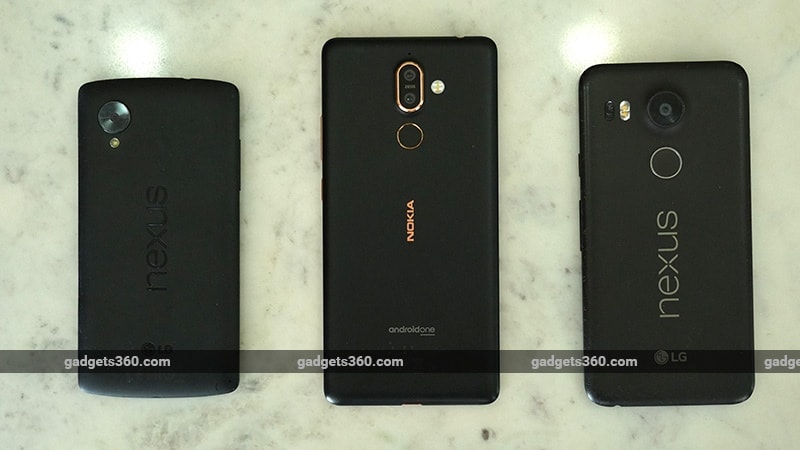 The Nokia 7 Plus, in a way is like a classic Nexus smartphone, and here’s why. Let’s start with the most obvious point - it runs stock Android. The Nokia 7 Plus is a part of the Android One programme, just like the Xiaomi Mi A1, and so a pure unadulterated Android experience and long-term updates are guaranteed. As a result, the Nokia 7 Plus comes without any bloatware. Even when I was reviewing the device I got to experience quick updates to Android 8.1 with the latest security patch. This was one of the main appeals of Nexus smartphones, and the Nokia 7 Plus delivers on that front.

I was also impressed with the build quality of the 7 Plus. Staying true to the Nokia brand’s heritage, HMD Global has built this phone with durability in mind. In fact, it outdoes every single Nexus device apart from the Nexus 6P (Review) in terms of materials used. While the Huawei-made Nexus 6P had a metal body, other Nexus devices were made of plastic.

While the Nokia 7 Plus, isn’t exactly light, it does sport a metal unibody with a ceramic coating to give it a premium feel in the hand. The display is also another strong point for the Nokia 7 Plus. It is up to date with the 18:9 aspect ratio, and has curved edges just like the Pixel 2 XL (Review). Even considering these things, the Nokia 7 Plus is priced lower at launch than many Nexus devices were.

Camera quality wasn’t great with many Nexus smartphones. Google did manage to get the cameras right with the Nexus 6P, but decided to stop the programme right after this device. When I bought a Nexus 5 (Review) back in 2014, its camera was disappointing. The software was improved over time, but this was still strictly an average performer. The Nexus 6P - and the Nexus 5X (Review) - to some extent commanded higher prices than previous Nexus devices. At Rs.25,999 the Nokia 7 Plus feels like a bargain in comparison and even packs in dual rear cameras. It has a 12-megapixel sensor with a wide angle lens, and a 13-megapixel sensor with a telephoto lens. This is quite handy as it gives you 2X optical zoom. I found the camera performance of the Nokia 7 Plus to be quite good, but it could still do with a bit of fine-tuning for low-light performance.

Battery life was just about average with Nexus phones. On my Nexus 6P, I would struggle to get through the day at times. My Nexus 5 was a little better in comparison, but the Nokia 7 Plus is a major improvement. It sports a 3800mAh battery which on paper is bigger than those of every single Nexus model ever launched. The result is evident, as the 7 Plus could last over one day with similar usage patterns. Also, it supports fast charging which can often come in handy.

Yes, the 7 Plus does not have a flagship-grade processor, but the Qualcomm Snapdragon 660 is still good enough at getting things done. It isn’t going to outperform today’s Pixel devices in benchmarks, but the performance is enough to get your work done without slowing down. Even in our gaming review, we found that this phone could run most high-end games without any fuss.

With Nexus phones, storage wasn’t expandable, and as a result, you would have to buy more expensive variants or delete files often in order to make room for the new ones. However, the Nokia 7 Plus has a generous 64GB of internal storage to start with, and when you are close to running out, you can pop a microSD card in for more space.

HMD Global has managed to craft an interesting smartphone that feels a lot like a spiritual successor to the Nexus line. It is well-built, its hardware is capable of delivering a smooth user experience, and buyers get a guarantee of software updates for two years. This means that it checks all the boxes for a Nexus device, but it also improves upon Google’s previous offerings in several ways. With all of that, the Nokia 7 Plus feels like a Nexus phone in every way – even though it wasn’t made by Google.

Further reading: Nokia 7 Plus, Google Nexus 6P, Google Nexus 5X, Google Pixel, Android One, HMD Global, Android Oreo
Aditya Shenoy Email Aditya
Aditya Shenoy reviews smartphones, wearables, headphones and speakers for Gadgets 360, out of Mumbai. Aditya is a reviewer for Gadgets 360 and has written extensively about smartphones, software updates, and upcoming devices. Aditya is available on Twitter at @adishenoy, and you can mail him at adityashenoy@ndtv.com, so please send in your leads and tips. More
Qualcomm Easing Licencing Terms in Bid to Strike Deals
Samsung's New Entry-Level Smartphone Gets Listed on Geekbench, Likely an Android Go Model