Xolo's latest phablet, the Q3000 is now up for pre-order at an e-commerce website at Rs. 20,999. The online retailer claims that the Xolo Q3000 will be available on January 4, 2014. However, there is no official word on the pricing and availability of Xolo Q3000.

Earlier, the latest phablet from Xolo was spotted at an online retailer without pricing. 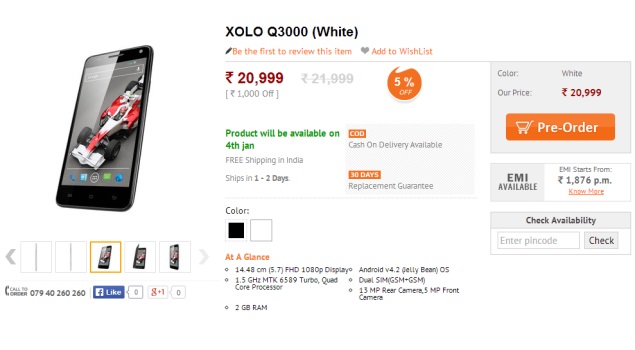 The Xolo Q3000 features 16GB inbuilt storage, which is further expandable up to 32GB via microSD. It sports a 13-megapixel rear camera with LED flash and BSI 2 sensor, while there is a secondary 5-megapixel front-facing camera which also features BSI sensor.

On the connectivity front, the Xolo Q3000 includes 3G, Wi-Fi, Micro-USB, and Bluetooth. The phablet packs a 4000mAh battery, which according to the listing delivers up to 33 hours of talktime and up to 667 hours of standby time on 2G network.

Earlier this month, Xolo launched the Opus Q1000 at Rs. 9,999 for the Indian market. The Xolo Opus Q1000 runs Android 4.2 Jelly Bean and is a dual-SIM phablet with support for GSM+GSM.

Recently, Xolo also introduced the LT900, its first smartphone with 4G support in India, via an online retailer. The highlight of the Xolo LT900 is that it supports TDD LTE bands, and is the first smartphone in company's LT smartphone series.