Xiaomi to Hold Launch Event on Thursday, Could Unveil the Mi 5

Xiaomi has announced a July 16 event where the company is likely to reveal its flagship Mi 5 smartphone alongside the bigger variant Mi 5 Plus.

The Chinese company confirmed the launch event in a teaser post on Weibo and shared an image showing possibly the Mi 5 smartphone's side with letters "PK" imprinted in the middle of the image. The teaser invite confirms that the event will see a sleek smartphone launch; though at this point it is not clear whether the company will be launching the Mi 5 or another device. 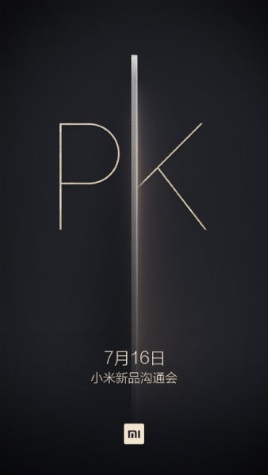 Further cementing speculations about the launch of Mi 5 is the fact that the Xiaomi Mi 4 was launched in July (specifically on July 22) last year. It is possible Xiaomi is gearing up to reveal successor to the 2014 flagship smartphone in the same month this year.

Some of the preliminary leaks have suggested that the Xiaomi Mi 5 would be priced at CNY 2,399 (approximately Rs. 24,500). It is said to feature a 5.2-inch QHD (1440x2560 pixels) LCD display with Corning Gorilla Glass 4; a Snapdragon 810 processor; a 16-megapixel rear camera; a 13-megapixel front camera, and a 3000mAh battery. An earlier report also tipped that Xiaomi's Mi 5 flagship will come with a built-in fingerprint scanner.

Considering that lately several reports have pointed to an October-November launch timeline for the Mi 5 smartphone, it is also possible the recently spotted Xiaomi 'Libra' may be unveiled at July 16 event.

Of course, we will have to wait till Thursday to see what Xiaomi has planned to launch.