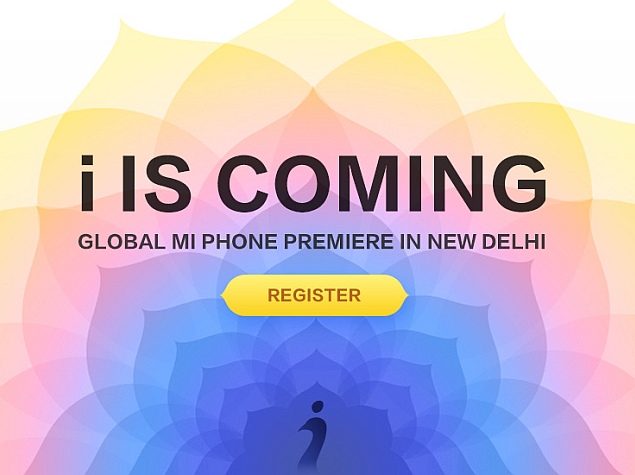 Xiaomi India on Friday announced an event in New Delhi on April 23. The company made the announcement via a tweet, which read "i IS COMING. Register for our global Mi phone premiere in New Delhi on 23 April." Xiaomi points users to its India site to register for the event.

The Xiaomi India site further reveals that the event will see CEO & Founder Lei Jun, President & Co-Founder Lin Bin, and VP Xiaomi Global Hugo Barra, in attendance. With that many of the top management due at the event, we expect the products being launched will not be minor - hinting the company will launch its newest high-end smartphones, the Xiaomi Mi Note and the Mi Note Pro. The company may also launch the Mi Box Mini, Mi Box, Mi TV, or Mi TV 2.

Other specifications include a 13-megapixel rear camera with a six-element lens, OIS, a Sony CMOS sensor, and two-tone flash from Philips. There is a 4-megapixel front-camera also onboard with large 2-micron pixels.

On the other hand, the Mi Note Pro features an octa-core 64-bit Qualcomm Snapdragon 810 processor (quad-core ARM Cortex A57 and quad-core Cortex A53) alongside 4GB of LPDDR4 RAM and Adreno 430 GPU. Running Android 4.4.4 KitKat-based MIUI 6, the Mi Note Pro supports a single SIM.

Much like the Xiaomi Mi Note, the Mi Note Pro also features a 5.7-inch display; though with a higher QHD (1440x2560 pixels) resolution offering a pixel density of 515ppi. The smartphone comes in a 64GB built-in storage variant with no word about expandable storage. It supports LTE Cat. 9 networks with download speeds up to 450Mbps.

Other specifications of the Xiaomi Mi Note Pro are identical to the Mi Note including a 13-megapixel rear camera with a six-element lens, OIS, a Sony CMOS sensor, and two-tone flash from Philips; a 4-megapixel front-camera with large 2-micron pixels, and a 3090mAh battery with Quick Charge 2.0 technology.