Xiaomi Teases Its First Smartphone Launch in India for July 11 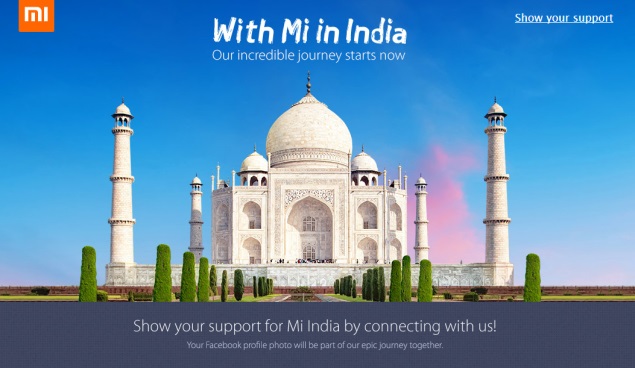 Xiaomi, often called the 'Apple of China', seems all set to launch its first device, most probably a smartphone, next week in India. The Xiaomi India Facebook page has hinted that the company will be announcing 'something special' on July 11.

As of now, there is no word whether the Xiaomi India Facebook post refers to an upcoming smartphone or multiple devices.

The Mi India Facebook post said, "A big thank you to all Mi Fans who showed your support and joined Mi at the start of our incredible journey. We have something special for you, do come back on 11 July 2014 for the announcement post."

In addition, Xiaomi India's official site, which was launched in June, is running a contest for consumers where they need to answer 'Which Mi phone do you think we'll be launching first?'

Earlier a report suggested that the Chinese handset maker Xiaomi, following the footsteps of Motorola, has teamed up with the e-commerce giant Flipkart to launch its handsets in the country.

The report cited some sources and claimed that Xiaomi can be expected to bring two smartphones in partnership with Flipkart in the next 2 to 3 months. While also added that the agreement between the parties (Xiaomi and Flipkart) is in the final stages, and the launch on the online marketplace will happen in July.

An earlier report citing Xiaomi's Global Vice President and former Google Vice President, Hugo Barra, who while reaffirming the company's commitment to the Android operating system, had in March revealed that his company intends to enter into the Indian smartphone market via online channels. Barra had also confirmed that his company plans to sell the smartphones at competitive prices via its own e-commerce site.

Other Chinese firms selling its handsets in India include Huawei, ZTE, Lenovo, Gionee and Oppo, the latest entrant.