Xiaomi is teasing the launch of two new smartphones on Wednesday. Posted on its Weibo, the teaser does not reveal which smartphones will be launched. Going on past rumours and leaks however, the launch of the Xiaomi Mi 5 and the Redmi Note 2 Pro are expected.

The teaser image posted last week on the Chinese micro-blogging website states terms such as "Mi Dual 11" that hints the November 11 date, and "This time we play the big! (sic) New phone finale debut at 0:00 on November 11 onwards," confirming the launch of a smartphone. It also states, "Become the first users of the new mobile phone" and shows a smartphone hidden under a curtain. 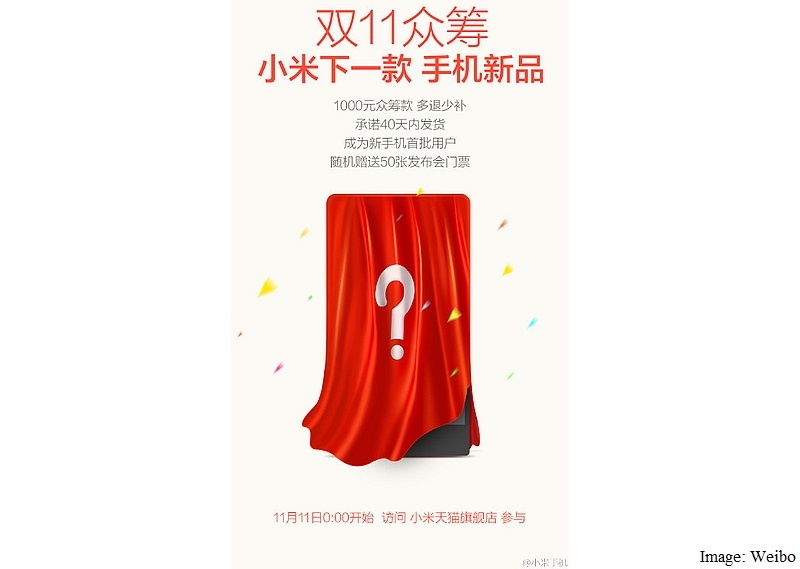 As per the latest leaks and rumours, the Xiaomi Mi 5 is rumoured to sport an octa-core Qualcomm Snapdragon 810 v2.1 SoC, a processor family already seen on the Mi Note Pro. It is also rumoured to use the Snapdragon 820 SoC. However, a separate report had recently claimed that due to a delay in Qualcomm's Snapdragon 820 chipsets, Xiaomi may opt for MediaTek deca-core Helio X20 processor. Some of the purported innards of the Mi 5 include 4GB of RAM; Adreno 530 GPU; a 5.3-inch QHD (1440x2560) pixels resolution display with pixel density of 554ppi; 16GB or 64GB inbuilt storage variants with no option for expandable storage; a 16-megapixel rear camera with dual-LED flash, and a 3030mAh battery.

As for the Redmi Note 2 Pro, the smartphone is rumoured to arrive in two variants - while one houses a fingerprint sensor on the back panel below the rear camera, the other variant would completely miss out on the particular feature.

It is tipped to share the same specifications as the Redmi Note 2. The only difference would be an inclusion of a fingerprint sensor and a metal build. For reference, the Redmi Note 2 features a 5.5-inch full-HD display, an octa-core MediaTek MT6795 SoC clocked at 2.2GHz clubbed with PowerVR G6200 GPU and 2GB RAM, a 13-megapixel rear camera, a 5-megapixel front-facing camera, and a 3060mAh battery.